Is RDF too hard? Read the following:

The principal suspect is surely RDF which is perceived to be somehow “difficult”.

Ok, now read the next sentence:

Although built on a simple triples data model there is no fixed XML serialization since abbreviate XML syntaxes are supported, and it is thus not easy to capture this neatly in an XML schema language.

Ok, now let’s assume someone that is a well versed HTML author, who has even managed to create an RSS 0.91 feed, reads this. How much of it will they understand before eyes start to glaze over?

Anyway, it’s all just XML right? Transforming it should be no problemo! (Or at least that’s what they tell me…)

RasterWeb is included in a list of Mozilla Related Blogs, which is cool. We cover a lot of stuff here at RasterWeb, and Mozilla is a subject we’ve been interested in since the early days. Why, we remember using the MXX builds that would take what seemed like minutes to launch, we’ve come a long way, and things just keep getting better.

Oh, in other news, Asa has referred to us as ‘good people’ which is very kind indeed…

Talk about off-site backups… TransOrbital wants to store a backup of your data in a safe place. Like on the Earth’s Moon, for example. PC Magazine has an article about it, the best quote is:

The moon is a pretty safe place to store your data.

Well, I suppose it might be relatively safe, but I’d think a RAIS (or Redundant Array of Inexpensive Satellites) might be another alternative.

So when you need to do a restore from backup, do you need to suit up for a lunar mission first? 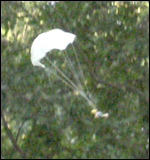 I have a confession to make. even though I’ve been using computers for well over 20 years, I am unable to use a standard office fax machine. There’s some sort of mental block there. I used to think it was because fax machines don’t have a mouse, or perhaps because they don’t have a command line. I don’t know… but I do know that it take me an average of 5 attempts to send a fax. Do I have to dial a 9 first? Do I dial a 1? What does the alternating beeping mean? Mysteries of the modern day office, indeed.

Now I can send and receive faxes, as long as they come in from eFax, and get sent via capturing them with the flatbed scanner, and sending them via software. Otherwise, forget it. You’ll either get 4 copies from me, or you’ll call me back asking if I ever got a chance to fax it. I might as well send email with an attachment.

There, the truth is known. I can’t operate a fax machine.