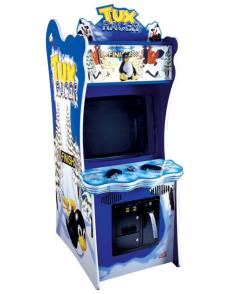 I really don’t go to arcades much, but was visiting some family from out of state and ended up at the Mineshaft and as we’re looking for games to play, I walk past one and see this penguin encased in plastic, pause, and say to myself “Hey, it’s Tux” and then a few seconds later realize it’s actually Tux Racer!

I’m not a big game player, but Tux Racer is a classic, and it’s available for Mac OS X as well as Linux and some other platforms. I remembered that there was supposed to be an arcade version coming at some point, and it looks like the folks at Roxor Games pulled it off.

Now here’s the funny part. I had just one game token, and I try to play it, but it requires two. Lo and behold, there’s a token sitting in the slot! So I play… Later, I convince Emma to play it, and then I find another token on the floor in front of the game! But wait… Later, when we’re almost ready to leave, I walk by and there’s a ticket hanging out of the front of the game!