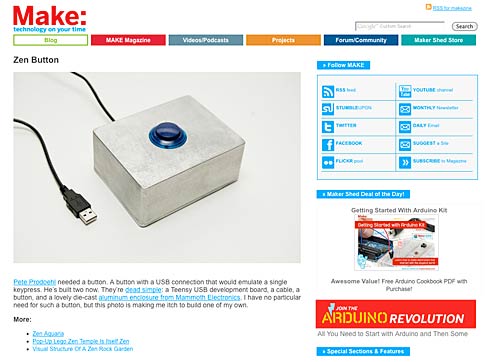 It’s me, Flip. I totally agree that my 1-key-keyboard isn’t ‘dead simple’ to build.. What I meant to say that the way it works after you built it is very simple.. just like in your project, you just plug it in an USB port and when you press the button, it’s automatically recognised as keyboard and pressing the button just works like pressing a keyboard key. That’s what I meant when writing ‘the same dead simple functionality’

I never intended to give you the idea that I was thinking your teensy based project isn’t a great project, your project has clearly a much bigger target audience, and yes, your project, is definitely a lot easier to build and comprehend, that’s always really great :-)

And I think the best of all is that we share our work, so more people can enjoy it! Keep up the good work on building and blogging!

Thanks Flip…. and yes, I definitely agree — the number one thing to do is to share your work, so that others can take it and run with it, either by doing the same thing, doing something better, or doing something completely different! :)

(I’m also glad Hackaday has taken a look at the commenting there and decided to make it more positive. I hope that helps to encourage others rather than discourage people who are trying their best to make and share their creations.)