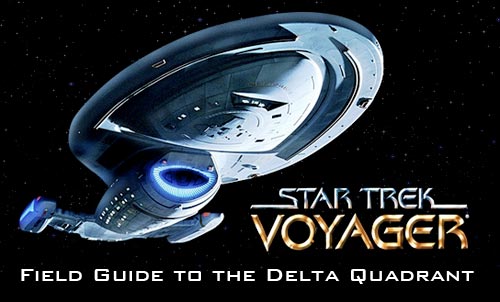 I’ve been watching Star Trek Voyager on Netflix, and I’m only into season 3, but I can tell you now, that if I were an officer on that ship, I’d have a few ideas of my own. Respect to Janeway, Chakotay and the rest, but seriously, enough of getting your asses kicked, it’s time to fight back!

I’ve seen the crew solve some tough problems, they’re smart people. Engineering is good, but the ship needs an R&D department. Too often the ship falls under attack and systems go offline. Redundancy people! Backups for the backups. Especially weapons! I mean, I don’t know what a photon torpedo is exactly, but you shouldn’t run out of them. Find a way to create new, and more powerful weapons. Think outside the Starfleet box here. Mount a series of laser strobes on the hull of the ship to confuse attackers. Heck, even space harpoons are a crazy idea that just might work.

All shuttle craft should be converted to fighter craft. When Voyager launches a shuttle, that thing should be ready to blow up the damn Death Star. Firepower talks! Fry some Kazon ass. Also, start building space mines, remote controlled explosive devices, etc. OK, I know Starfleet is all “peaceful explorer” but Voyager has a lot of enemies out in the Delta Quadrant, and being able to defend themselves would come in handy. If anyone ever questions their kindness, they could do some community service or something.

All crew should be trained in the martial arts. Kung Fu or something. Tuvok was a teacher at the Vulcan Institute of Defensive Arts. Every crew member should be able to kick someone’s ass in hand-to-hand combat, and even disable an alien with a weapon. No more damn Holodeck programs about playing pool, they should run some sort of Fight Club Holodeck program to toughen themselves up. All they have to do is kick one alien species ass, and all the other aliens will respect them.

Work on improving the efficiency of all of the ships systems. Replicators could use some improvement, as could the transporter systems, communications, etc. I feel like playing the clarinet is a bit silly when you could find a way to increase scanner range by 10% with a bit of old fashioned brainstorming.

All crew member should be cross-trained in multiple disciplines. They do a little of this, but there should be more. It’s great that Kes assists the Emergency Medical Hologram, but she’ll be dead in 7 years, so I hope they’re training someone else as well. Tom Paris is good at flying the ship, but he needs to be training others to do that as well. Just a bit of mentoring here and there.

Don’t get me wrong, I really like the show (despite it being in 4:3) and I’m only trying to help.

Starfleet, if you’d like to hire me as a consultant, let me know!

6 replies on “Field Guide to the Delta Quadrant”

Gosh, thanks…. Anything I missed?

It’s been a long, long time since I saw Voyager. Better hairclips for Janeway?

Zing! My youngest daughter watched an episode with me and said “This looks really old!” and I told it takes place in the future, but she wouldn’t buy that argument.

Like you, I have been re-watching ST: Voyager. Your post cracked me up, but I need to point out that you missed one thing. My advice to Janeway (and really every Federation Captain) would be: Turn off the damn holodecks! And I mean permanently disable those things, they are nothing but trouble. It seems like every 4th or 5th episode one of the following happens:

– A holo-creation becomes sentient and proceeds to take over the ship
– The safeties are disabled, so the people “trapped” in the holodeck can be killed or injured
– The people in the holodeck for a little R&R must now complete a story in order to save the ship or the Universe
– Some crew member starts to confuse the holodeck with reality (or vice versa)

Now, I am not against all holo technology – no sir! The EMH is a great use of holo-technology. He is constantly re-capturing the ship single handed, or with only a little help, every few episodes as well.

Larry, you’ve nailed it. Also, there should be an Emergency Security Hologram.