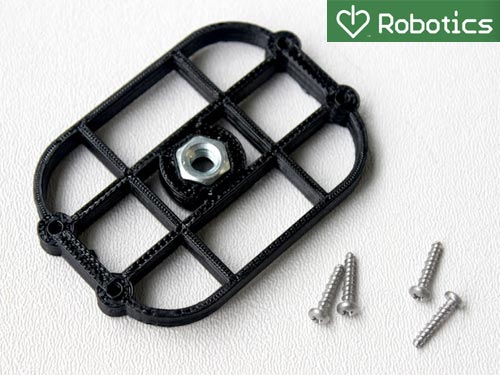 In the spirit of my “Maker Business” posts (like The Real Costs and Lessons Learned) I’d like to point you at this post from I Heart Robotics titled Business Plan: 3D manufacturing. If you haven’t read it, go read it. Then come back here. I’ll wait.

This is my favorite post of the week… and it’s only Thursday! For anyone wanting to get into a maker-related business, it’s a must-read.

The funny thing is, I’d seen one of these TriK Tripod Adapters for the Kinect before, because Mike printed it at Milwaukee Makerspace one day. (You could say I have an interest in various camera related mounting technology.) Yeah, that’s right, they guys who were selling this item also gave away the design for free to anyone who wanted it. Insane you say? The world I want to live in, I say…

This is an area I see open source hardware similar to open source software. Once a problem is solved, why not share the solution with everyone else, for free? You’re welcome to sell the software (or hardware) all you like, and letting other use it for their own use is a great side effect that costs you nothing. (Some could argue it costs you in potential revenue, but I won’t argue that right now.) It’s also worth noting that I Heart Robotics licenses the item with an Attribution – Non-Commercial – Share Alike license. For those unfamiliar with Creative Commons, a simple explanation would be that as long as you don’t make money by selling it, you can go nuts and make (and give away) as many of them as your 3D Printer can make.

This breakdown of costs is also worth studying.

What can we learn from these numbers? Plenty! Some of these items are things you don’t really think about, like labor or equipment operating costs. For instance, I use a drill press in my basement to manufacture things. I don’t really add in the cost to run it for a few minutes per unit, but maybe I should. I also run a fan in my spray booth, and that uses electricity. The numbers might be negligible, but they do exist. (Oh, we also learn that Uline is awesome.)

Since I’ve been dealing with numbers like these in the past few months I’ve become a little more aware of people who complain about such things. I can see someone who owns their own 3D Printer saying “They want $20 for that!? It’s like 5 cents worth of plastic!” and while it may be just 5 cents worth of plastic (or less) there’s a lot of other costs involved. If you have the power to make one on your own, go for it! Either design one and make it, or in this case, download it and print it. I’ve learned that even if you carefully outline exactly how to do something and publish it on the Internet, there are still people who will (gladly) just pay you to do it all for them and then ship it to them, and for that I am grateful.