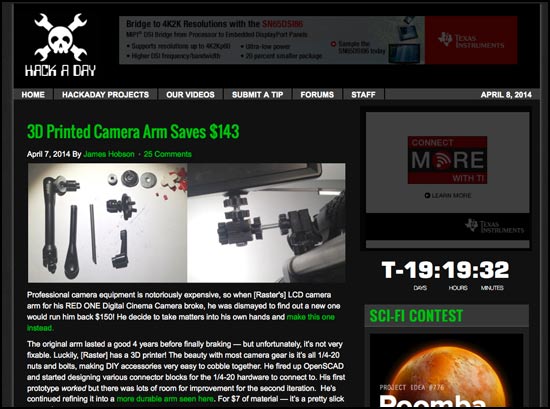 Recently Hackaday posted some tips about tips, which I assumed was to get more people to submit more items, and be better at submitting items. So I submitted an item, and they posted it: 3D Printed Camera Arm Saves $143.

But hey, since I have my own web site and don’t just leave comments on other sites, I can post whatever I want here, including my responses to some comments.

Thanks, Waterjet! I obviously ran out and spent $1000 on a 3D printer so I could make one thing. It’s not a tool I use all the time for many different things. I’m sure I’ve spent more than 20 hours in total learning how to do 3D modeling, but hey, I don’t watch sports, so I needed something to fill my time. Oh, and you don’t have to buy a 3D printer, you can probably join your local hackerspace and use one there. We have three at Milwaukee Makerspace. Yeah, I also spend my free time helping create a hackerspace. You’re welcome.

I don’t get it, is it a joke? come on, ten minutes with a piece of of wood a drill and a hacksaw could have made something less flimsy and looking nicer

Thanks, fonz! I’m still waiting for the blog post that describes the version you’ve made. Oh, what? You didn’t make anything? You just leave comments on things other people made? By designing a thing and making the files available, I’ve shared something that others can build upon. I think there’s value in that. But hey, I really do want to see the scrap wood version you’re working on. I’m especially interested in how you make hexagonal cuts with your hacksaw. Perhaps you can write up an Instructable on that.

I also learned that I’m cheap (I knew that) and I waste my time (duh) but hey, if you too need such a reminder about how you do things wrong, just post your project to Hackaday!

Here’s the thing, kids… I don’t really like watching sports, and I don’t sit around drinking beer. I spend my time learning new skills and trying new things. I make things, and if they don’t work, I try again, or I move on and hopefully I’ve learned something. I share the things I do in the hopes it will help or inspire others. If someone wants to spend 10,000 hours building a replica of the Millennium Falcon out of toothpicks, more power to them! I’m, not gonna knock them for it. In this case, I made something that is actually a useful thing, and to me there’s value in that.

And yeah, being on Hackaday definitely brings traffic to your site. This was not the goal of submitting something. I actually share this stuff because I think that’s what needs to be done with knowledge and experiences—they need to be shared. This is how we all collectively learn things and (hopefully) advance humankind. Or, you know, we could just leave comments on things.

Some people simply can’t enjoy the act of creating something. They immediately have to break down the pros and cons, find the weak points and downfalls, etc. I have no idea why, but it is rampant.

I suspect maybe the first comment about the cost could possibly be attributed to the title being focused on the savings. I get that the thought might cross your mind, but really the articles would all be insanely boring if they titled them in the most absolutely literal way possible.

Good job on the camera arm, keep up the good work. I know more than anyone how demoralizing a bunch of jerks commenting on something can be.

Thanks Caleb, I wrote the title myself, and I thought it was sort of catchy and also amusing. I mean, I could have easily told my boss to pony up for a replacement arm but I thought it would be more fun (and I’d learn something) by making my own. I know some people don’t see the value in that, but I’d expect most Hackaday readers would. Well, some of them would.

The title works for me, though my fallback in these cases was always to just say it was an elegant design. Its a copout, but it saved me from some scenarios much like this. You have to be the 3rd person though, its weird if you brag about your own designs being elegant.

I always have a mixed reaction when the work of someone I follow gets coverage on Hackaday. The initial, “Hey great, their project is getting some attention!” is quickly followed by something like, “Gird your loins, friend.” I wonder why the culture on Hackaday has always been so negative, relative to other blogs. The influence of their dark style sheet?

Consider it an honor, like a celebrity “roast” for the maker community, only the roasters are merely boorish and not at all witty.

Of course, for every obnoxious “meh” comment, there are tens of thousands of readers who read the story and think, “Good job”, but don’t take the time to leave that comment. So….