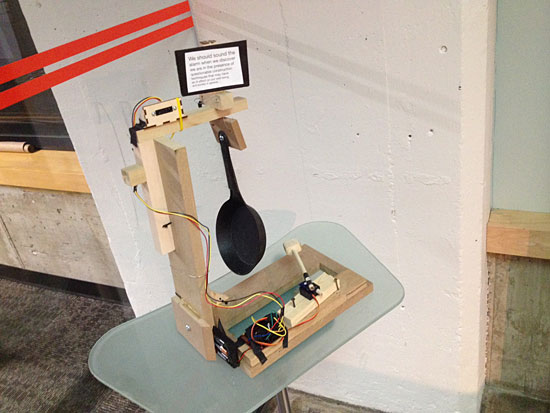 Here are the ‘before’ and ‘after’ photos of a piece I presented at UWM’s Arts+Tech Night titled “Sound the Alarm”, which lasted either 45 minutes or 3 hours, depending on how you want to look at it.

My plan was to build a (mostly) useless machine from (mostly) scrap material. That part worked fine. I added an IR sensor that would trigger a servo to hit a wooden hammer against a frying pan. The sound was really nice. Sort of.

I built this really fast, and did some minimal testing, and it worked fine, but the Law of Deployment, which states “It will work fine with minimal testing, but fail when put in place” took hold…

It worked fine for 45 minutes, and scared a few people. I made a sign with small type that you had to get close to read, and when you got close enough, CLANG! The hammer would hit the pan. It was lovely.

After 45 minutes or so, it just kept hitting the damn pan every few seconds. I assumed the IR sensor failed, or maybe a wire came loose (nothing was soldered) and Vishal from Milwaukee Makerspace (who just happened to stop by) even tried to repair it. 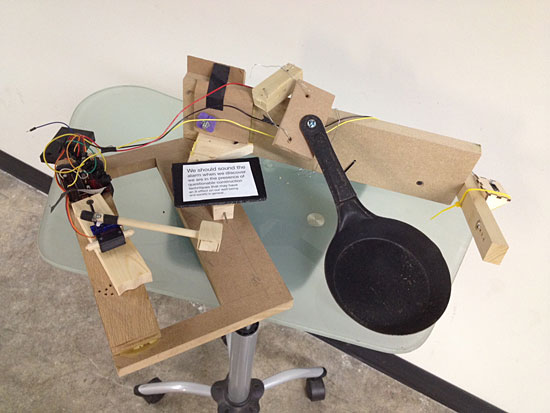 So after 3 hours of clanging loudly, with me stuck just 10 feet away, I shut it down, and wheeled it into the elevator where it promptly toppled off the cart and broke. Which was sort of perfect, as the text on the sign suggested we must “sound the alarm on questionable construction techniques”.

I ended up connecting the Diavolino to my computer to debug things with the serial monitor. To my surprise the sensor was doing the right thing. I then assumed it was the servo that went bad and decided to just trigger all the time. I threw a different servo in place and it seemed to work fine again, for a while.

Eventually I gave up and left right before midnight and went outside to discover I had a flat tire. Awesome! I then used a toy air compressor from Harbor Freight to put enough air in my tire to drive home.

Despite what sounds like a bunch of crap it was a really a great day!