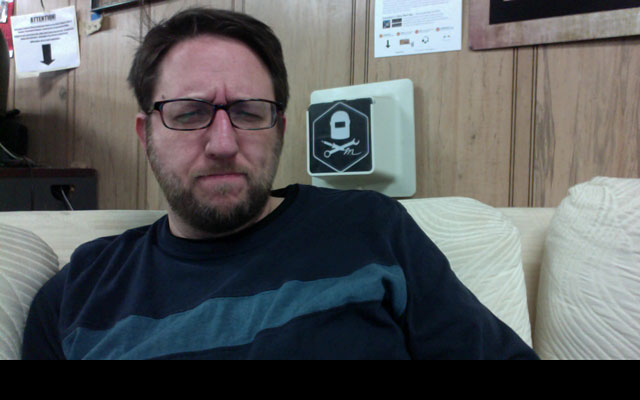 It’s become a tradition around here to update my simple photo booth using Processing when a new version of Processing comes out. I’m not sure Processing 3.x is final yet, but I’m using it, and it’s got all sorts of good stuff. (You probably remember Processing PhotoBooth v2 and Processing PhotoBooth, which are both deprecated now, but see them to know what I’m talking about.)

One of the things new in Processing is the fullScreen() function, which gets rid of the whole “figure out the size of the display” issue, by just saying “run at full screen”!

There’s also a new thing called settings() which can appear before setup(), but I won’t get into that…

And hey, once again you’ve got a simplistic photo booth application. Congratulate yourself by purchasing this lovely button for it. (Or get this “bare” button and build your own damn case.)

Now, I don’t know if the fullScreen() thing has a bug, or if it’s my setup, but here’s what I’m seeing. I typically run my display at 1440×900 using QuickRes, which is a non-standard setup. When I ran the sketch it seemed to display at 1280×720 in the upper-left corner. My guess is that the camera is only capturing 1280×720, so the sketch only fills that amount of the display, no matter what the resolution is. I’ve tested it at higher resolutions and get the same thing. If I set the display to 1280×800 it’s all good.

This is most likely not a bug, but a “thing to be aware of” in the future…

Besides all that, the most exciting thing about Processing lately is that there is finally an official version that runs on the Raspberry Pi! This is super-awesome and has great potential for artists and others who do exhibits and installations. I’ve already got a few ideas in the works. ;)