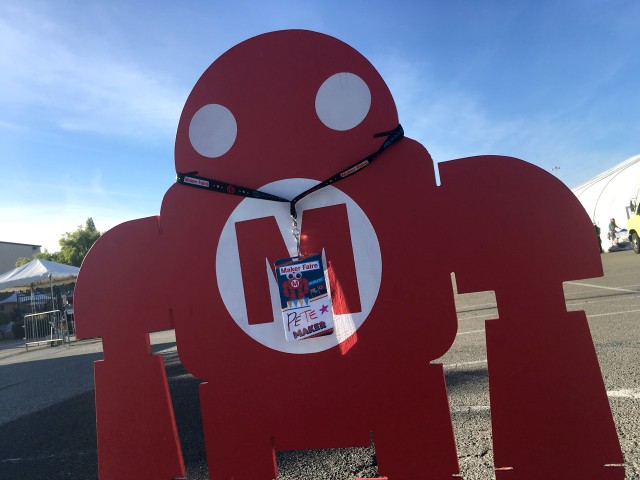 I attended the Bay Area Maker Faire (sometimes referred to as “BAMF”) and while I spent most of my time in a booth helping explain what Crazy Circuits were, I did get some time to run around the Faire and see a few things.

I also got to meet people I may not have seen for a few years, or not met at all, and only know through online interactions, so that was awesome. I’d provide a list of folks but I’m sure I’d forget a few!

So here’s some photos and some notes about photos. As mentioned, I did not get to see everything, and being such a crowded event there would be times I’d really want to talk to someone but it would have meant waiting around for other people to finish talking, and I had limited time! Here we go…

I was really excited to see Robot Dance Party in person. I had read about it (him?) years ago, and it was totally unexpected to come across the #RobotDanceParty while walking around the Faire. It’s as simple and silly as you might expect. Here’s more info on the Dancing Robot that Parties. 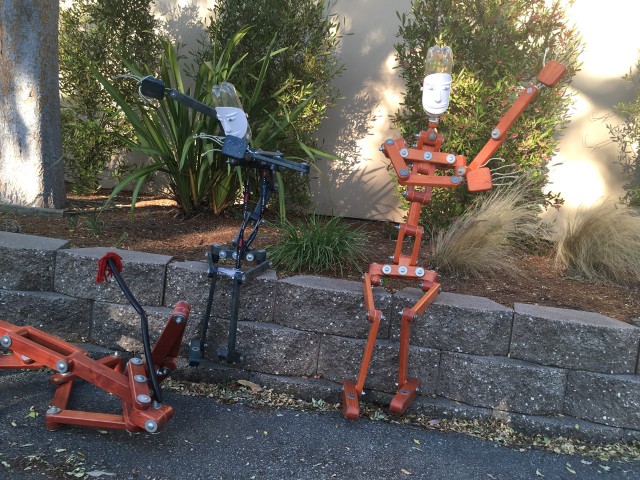 While everyone was eating paella on Friday night I had to find a restroom and wandered down this back walkway surrounded by these weird and creep robot-type things with uncanny valley faces. It was strange, unsettling, and awesome. 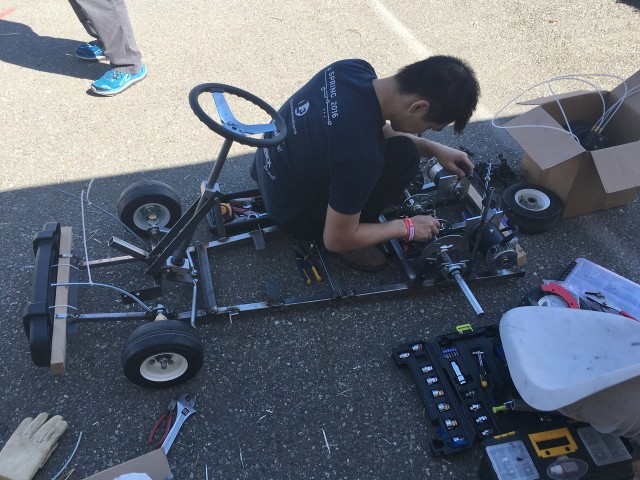 There’s a question those involved in the Power Racing Series ask… What Would Bill French Do? In this case, the answer is, show up Saturday morning with a car that is totally not ready to race, and isn’t even done being built, and solder up a motor controller while someone else works on finishing the actual car build. That’s what Bill French did. 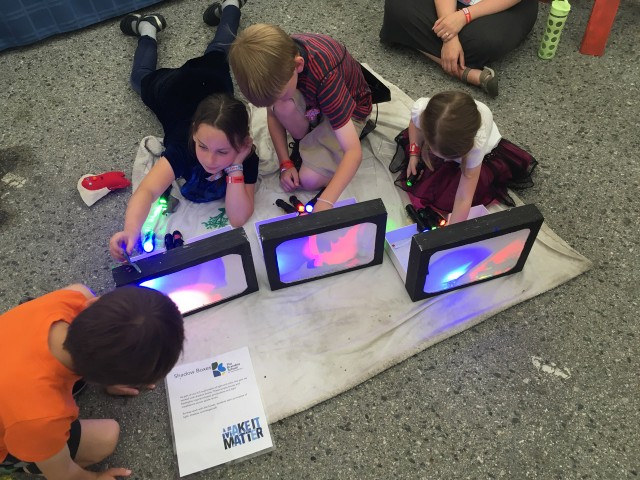 These portable shadow boxes were simple and fun, and reminded me of an activity I’d see in a Children’s Museum. 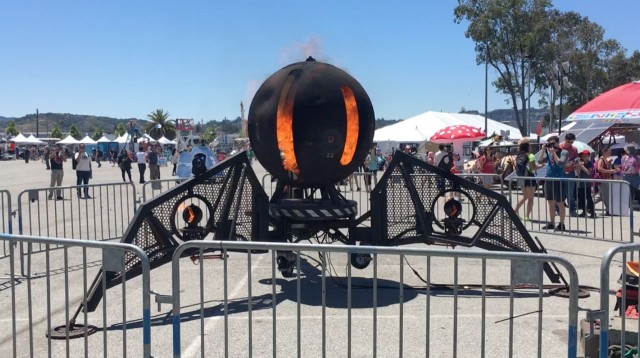 This spinning fire thing was interesting, and I saw it every time I ran from the booth to the restroom and back again…

I call this “French Cleat All The Things!” and wanted to snap a photo to remind me of a good way to organize a creative space… 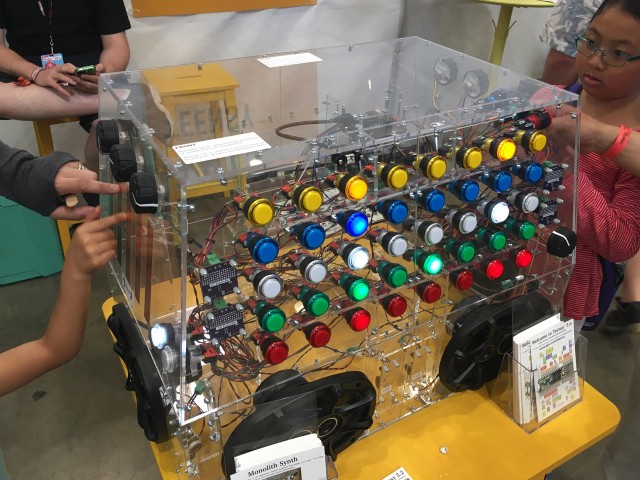 I got to meet Paul Stoffregen of PJRC, though since my voice was shot I’m not sure he knew who I was or the fact that I’ve bought hundred of Teensy boards from him. Anyway, he had this super-cool kid-proof synth at the PJRC booth. 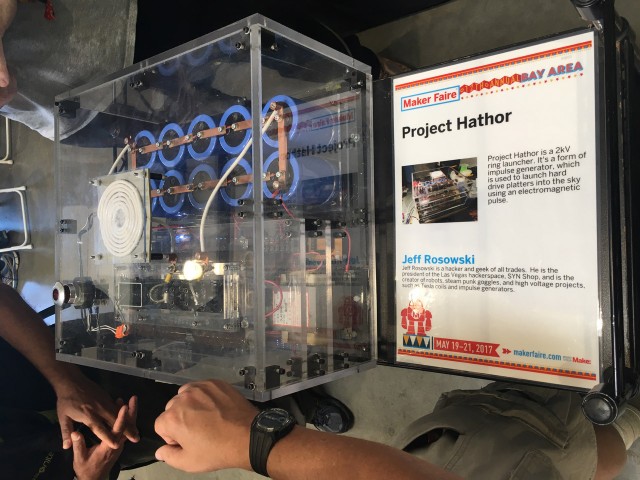 I took this photo to show to a few people at Milwaukee Makerspace. Specifically, Bob and the people who made the coin shrinker and other crazy devices. Once again I didn’t get to talk to the makers or spend a lot of time looking at the thing… I had to keep moving! 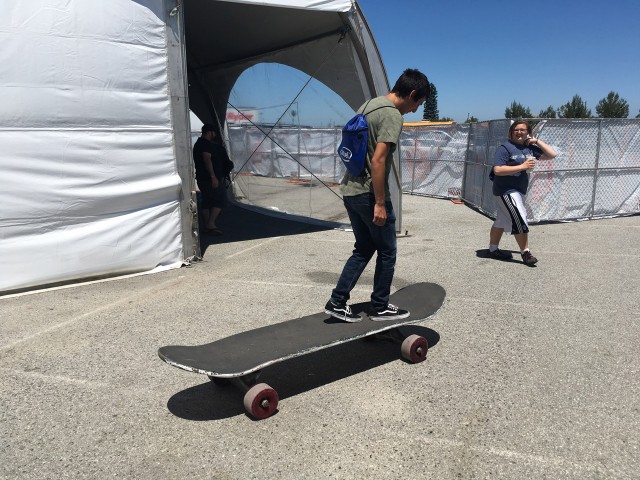 This was a large skateboard. It was so large someone said you could use a normal skateboard to get from one side to the other. They had cast the wheels using Urethane. I was hoping they had cast the trucks, but they were actually 3D printed by some company. (The guy I talked to didn’t know what company.) 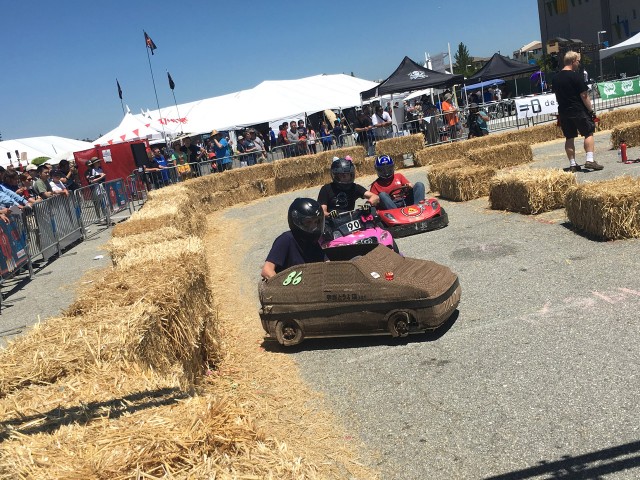 I actually got a little bit of time at the Power Racing Series racetrack and helped marshal a race. This cardboard car was pretty awesome to see. Underneath was basically a Crazy Cart and it drove sideways a lot. 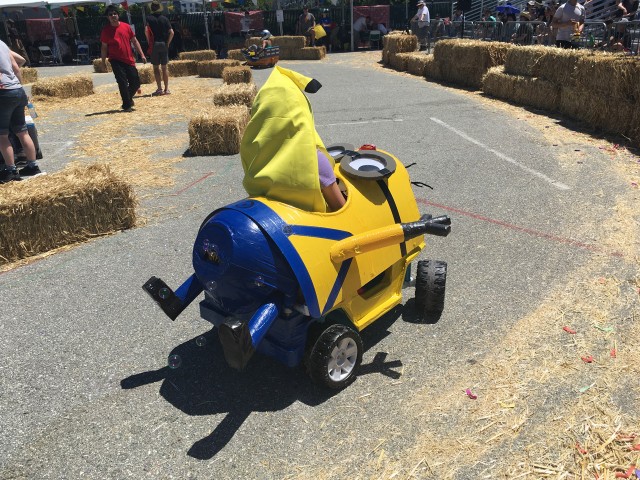 The minion car that was eating a banana and farting bubbles was highly entertaining. I guess the team destroyed the original (nearly stock?) Power Wheels car the first day and had to go buy another one for the second day. 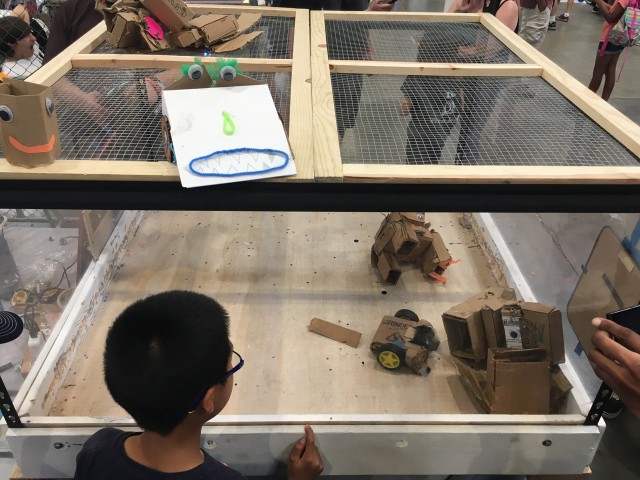 From what I could tell this was a sort of “BattleBot Arena” where you could make a cardboard robot and then see it destroyed by a robot with a rotating saw blade. At least that was my guess after watching it for approximately 60 seconds. 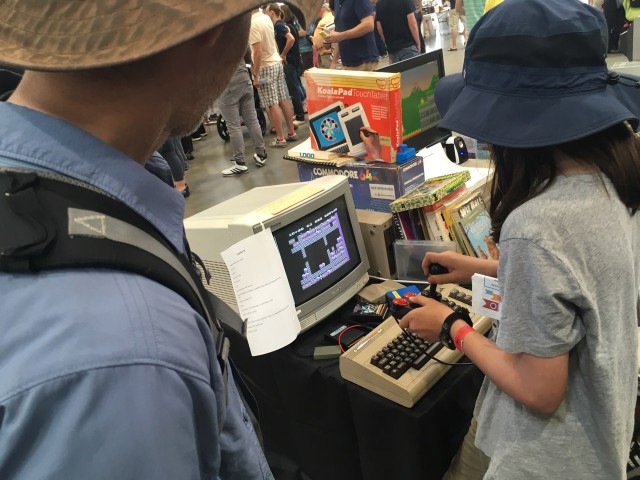 The had vintage computers running vintage video games, and kids loved it. Is that a Commodore 64!? 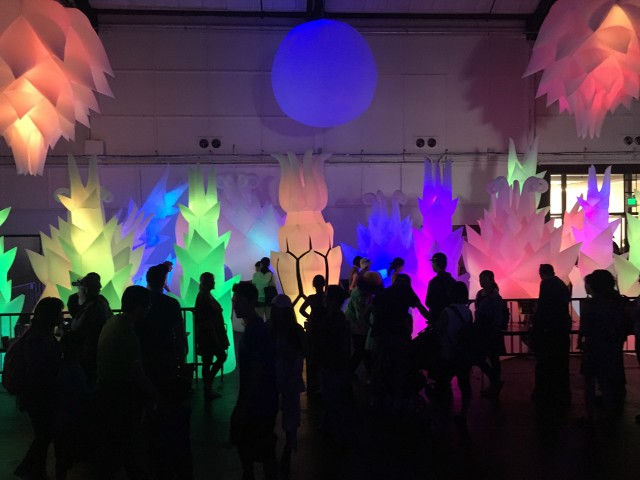 There were giant light-up inflatables in the Dark Room and you could walk and crawl among them and there were pretty cool. 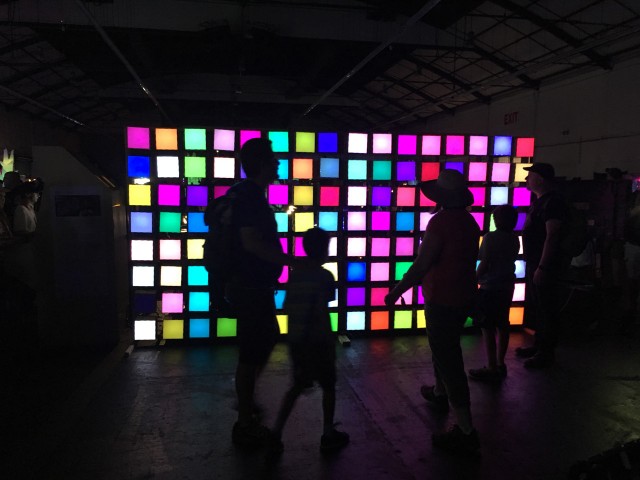 I also loved these colored squares. Simple yet effect method of working with light in the Dark Room. 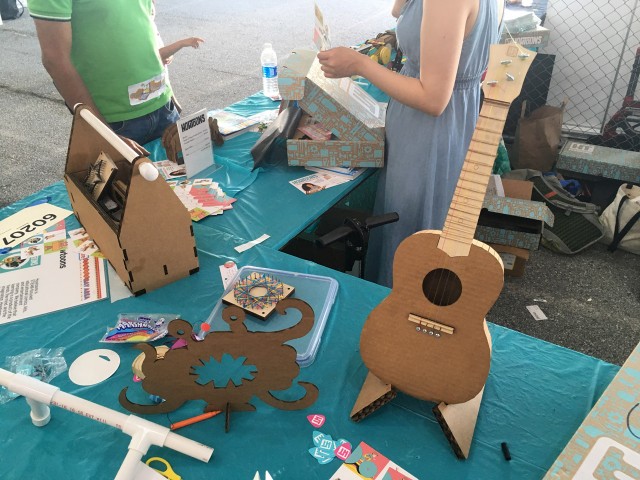 The Howtoons table had some great stuff. I believe they’ve moved from just books & comics to a subscription & kit model. If you’ve got a kid-maker this looks like something they would love. (I loved the cardboard ukulele!) 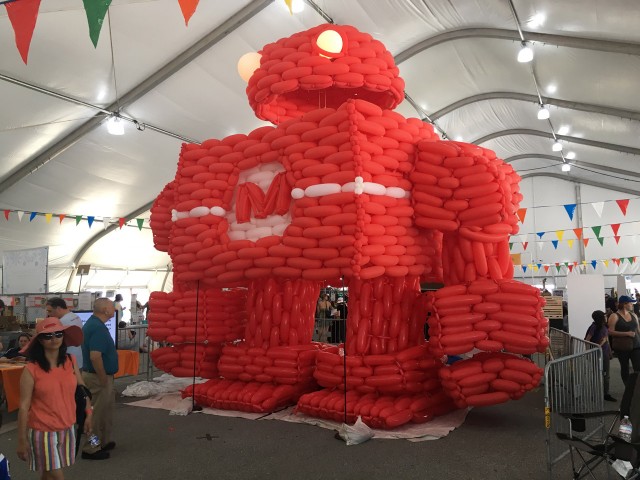 In the tent I was in a group was building a giant Makey Robot using balloons! Luckily I posted a photo of it and my pal Dan from Rochester, New York identified the group as Airigami, and said he saw they at Maker Faire New York. 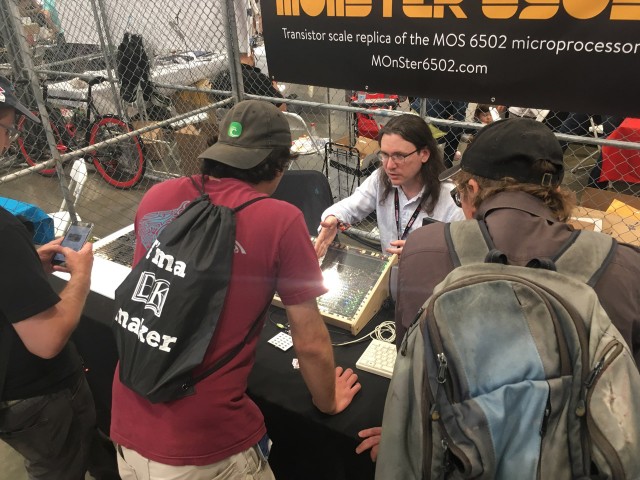 I got to see Lenore and Windell from Evil Mad Scientist Laboratories. Each of them stopped by to see me (separately, because, you know, someone has to stay at the booth) and then later I got to see them both at the booth for a few brief seconds. While I was taking this photo a guy came up with a friend and shouted “This is the absolute coolest thing here!” in response to seeing the MOnSter 6502. It was indeed beautiful. 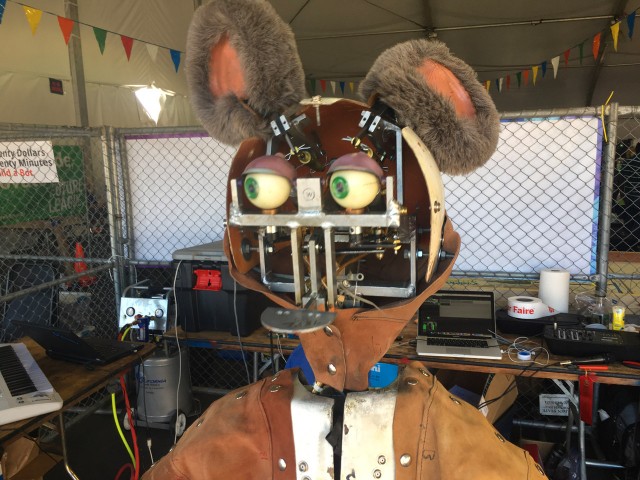 I heard you like nightmares so we took an old Chuck E. Cheese robot and ripped its face off and then turned it on to freak you out. You’re welcome! 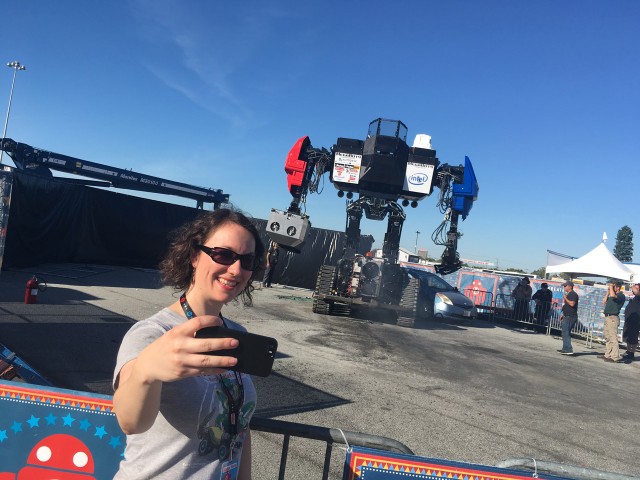 I got to run around with Karen for a bit at the end of the Faire and we saw as much as we could in a short amount of time. And of course… MegaBots! (Though I totally missed the part where some guy proposed to Jen.) 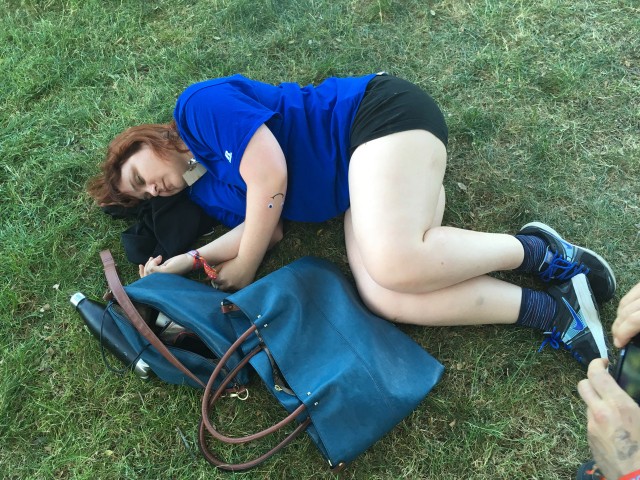 Robin demonstrating how we all felt at the end of Maker Faire. Exhausted. Thanks to everyone I met and apologies to everyone I did not get to meet! I hope to make it back again in the future!