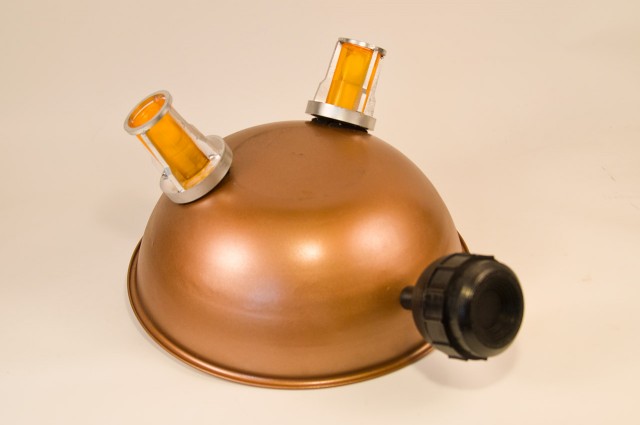 One of the big attractions for Maker Faire Milwaukee this year was a Guinness World Record Attempt for the “largest gathering of Daleks” and since I was drafted to be part of the “Dalek Dream Team” I thought I should make something to be part of it all.

You may have seen a few in-progress shots on Instagram of the Dalek eye which was 3D printed and then painted, but I’ll cover a bit more of the construction of the rest of it. 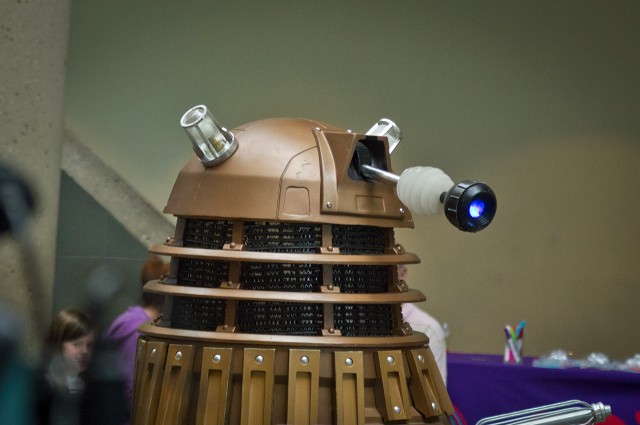 For those of you unfamiliar, the Daleks are evil creatures from the television series Doctor Who. Above is a photo of a Dalek so you can see what the head looks like. I was aiming to replicate the head on a low-budget, and without much time as I was just a little bit busy organizing Maker Faire. 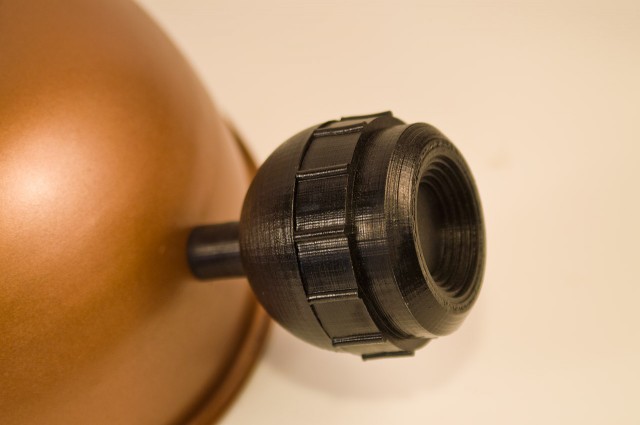 I started with a large metal bowl I got from a retired science teacher who was cleaning out her house and garage that held 30 years of classroom experiments and materials. Getting the bowl (and a bag full of plungers) was pretty much the inspiration for this project… along with the fact that the folks at Dalek Asylum Milwaukee were on a rampage building Daleks at Milwaukee Makerspace every time I was there.

Once I had the bowl and acquired a lovely gold spray paint, I grabbed an eye from Thingiverse, split it in two pieces, printed it, and then painted it and attached it to the bowl with a bolt.

I forgot to get a photo of the two halves, but this is a trick I often use, printing in two pieces and the assembling together. This time I drilled a hole through the bottom part, stuck a bolt in, and then hot glued it in place before gluing both pieces together. It worked out well. 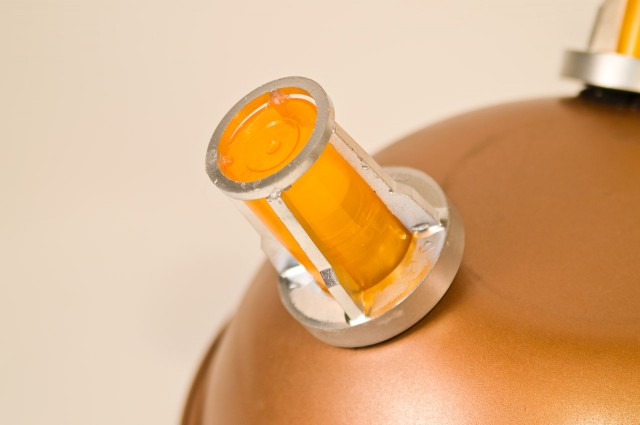 Jon (Master of the Daleks) gave me two light cages, which appear to be laser cut Acrylic glued together and painted silver, along with two ping pong balls. I then got two size PM-40 pill bottles which I Dremel’d to the right size, and put sliced in half pudding cups inside of to hold the ping pong ball at the right height. 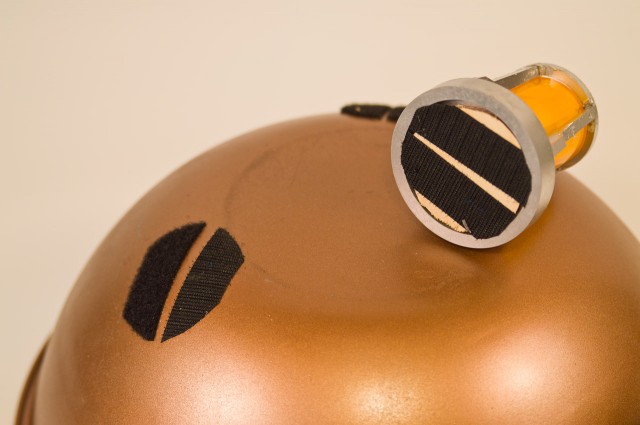 I also cut some 1/4″ Baltic Birch (by hand) to put on the bottom of the light cages. I hot glued those in place then attached Velcro® Hook and Loop so I could easily attach them to the bowl (and remove them if needed.) 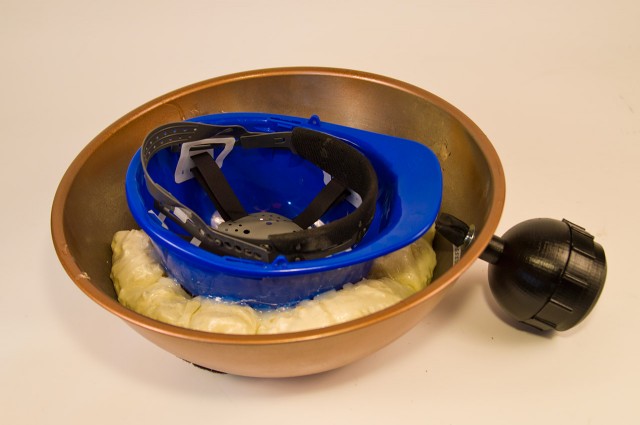 The next part was the most difficult. I should state that I really never make costumes or wearable things, so… yeah. I originally tried to make something with foam, and I thought about chin strap, but then I got a hard hat for about $7 on Amazon and thought that if I could attach that, it would be easily adjustable to (nearly) any size human head. The hard part was getting it attached to the bowl. I tend to deal with rectilinear things, not curvy shapes.

I brought the whole thing to Milwaukee Makerspace and asked for ideas… One member said he could make a wooden frame for it, and we did that, but it ended up being really heavy. Like.. uncomfortably heavy. I ended up removing that and using Great Stuff, as another member recommended. I’ve never used Great Stuff before, and let me tell you, it’s terrible.

I got Great Stuff on my hands, and that shit is nasty! I tried to scrub it off, and eventually using Comet cleanser, probably not the best thing to clean your hands with, but then again, Great Stuff shouldn’t be on your hands either. Wear gloves! I ended up getting my hands clean enough to not be sticky, but my fingers were stained for a few days. Yuck! 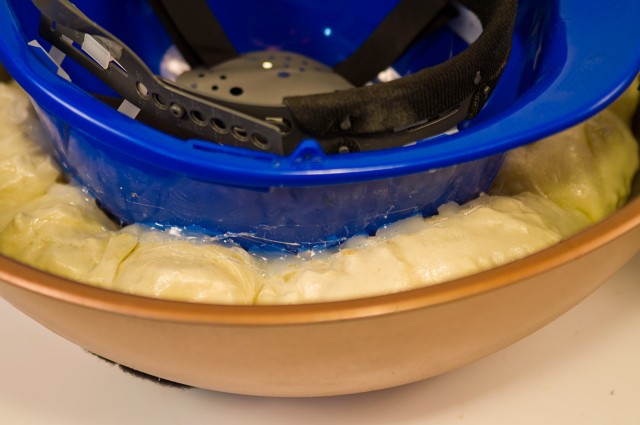 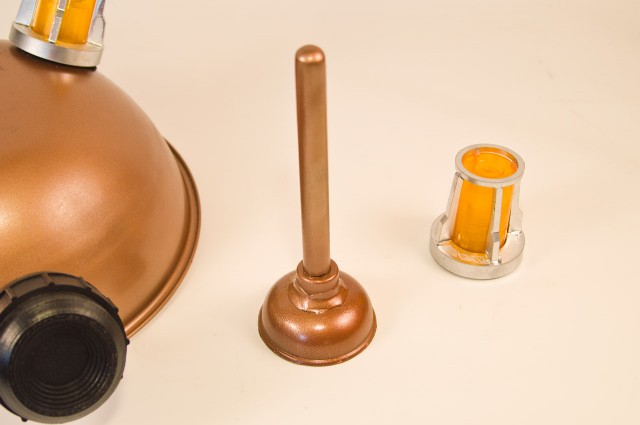 Since I also had some plungers (from the science teacher’s house) I painted one gold to go along with the headwear. Every Dalek should have a plunger and a whisk, or a paint roller, or something that looks like that silly Dalek arm… the one that is not a plunger. 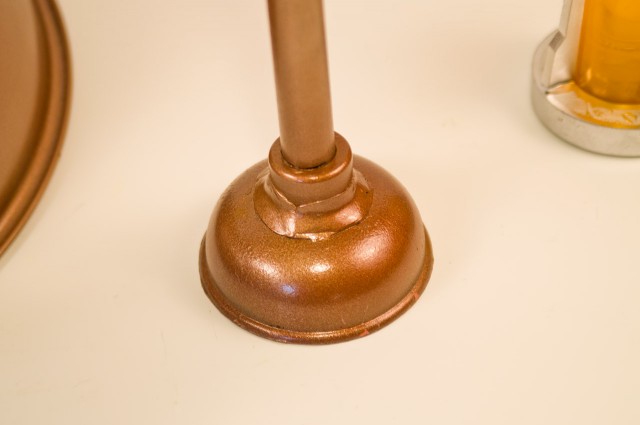 The first time I painted the plunger I ended up flexing the rubber part and flaking off the paint a bit, so I turned to… hot glue, once again, to make a sort of “weld” thing around the base to prevent the rubber from flexing. It worked, but I forgot to bring the plunger with me (a symptom many were guilty of) so it didn’t get to be part of the ensemble. 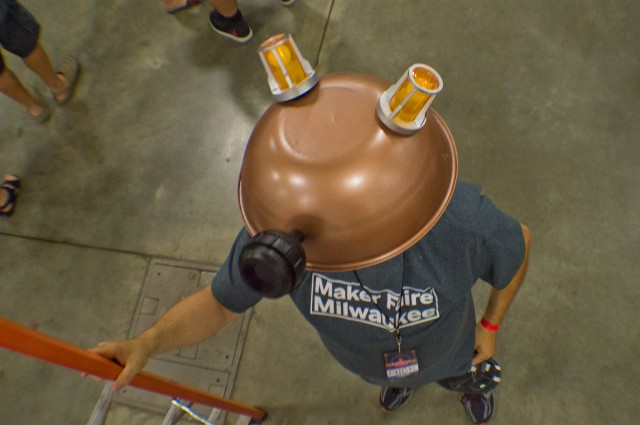 And here’s Rick from Milwaukee Makerspace wearing the Dalek headwear while holding the 10 foot ladder I was standing on. The headwear does work okay, but if you’re moving around it tends to fall forward. And forget about running or leaning forward. Perhaps it does need a chinstrap. Or maybe I’ll just keep it around without actually wearing it. I don’t know… it’s just another ridiculous thing I made because I love Doctor Who and Maker Faire.