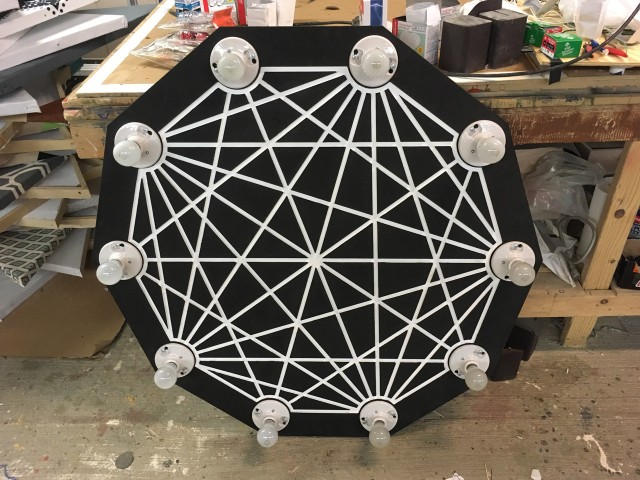 It’s been a while since Decagon Light (Part II), but we’re here with Part III! Thanks to Jason we (mainly he) finally got around to do the CNC work for this monstrosity. Becky then wired it up while I worked on the programming. (Thanks, Brinn Labs!) 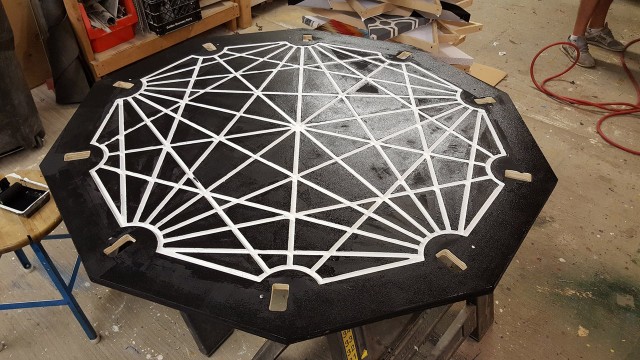 Below is the small prototype again…

Besides adding some new patterns, I modified the code so you can use any consecutive pins. For the LEDs I use pins 1 through 10, but for the lamps we’re using 2 through 11. (Don’t ask why.) I also added an logic flipper, because LEDs and relays work opposite, HIGH is LOW and LOW is HIGH, depending on which you are using, so yeah, a lot of the code writing was just to deal with the differences between two version of this thing. Anyway, I squashed the last bug today, so it’s all good. (I think.)

And here’s a short video of it in operation. There’s still work to do, but we’ve made great progress in the last two weeks. (And yeah, I really wanted it done before Maker Faire, but didn’t quite hit that deadline.)

You’ll notice the design of the lines changed a bit. It’s still a decagon (a 10-sided polygon) but it’s no longer a 9-simplex. It’s almost a 5-orthoplex, but not quite. If you can figure out exactly what it is, let me know.