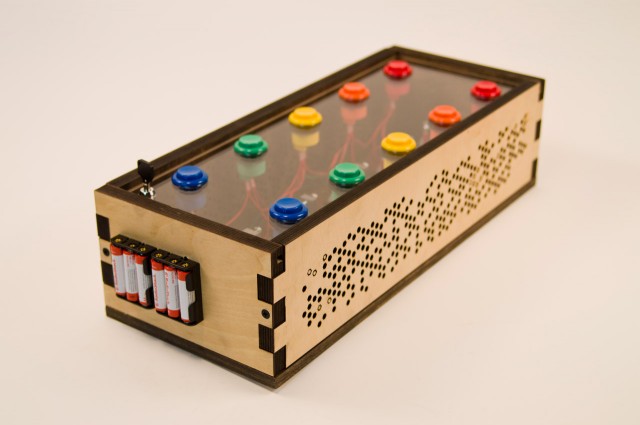 BuzzBuzz is a device that makes noise and light using electricity (somewhere around 40,000 volts, approximately.) There are five “high voltage generators” connected to buttons that when pressed cause them to create a spark with a loud “ZAP!” and then continue to make noise (and light) while the button is held down. 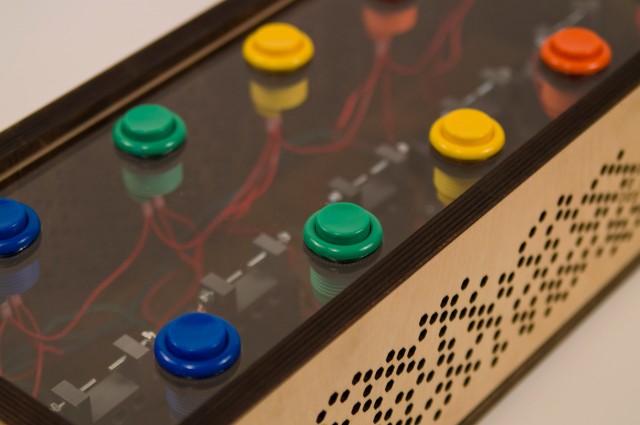 BuzzBuzz was heavily inspired by something Mario the Maker created. I had one of the high-voltage generators for a while and was planning to do something with it. I had an idea for a project and had started on it, but once I saw this thing I altered my plans. 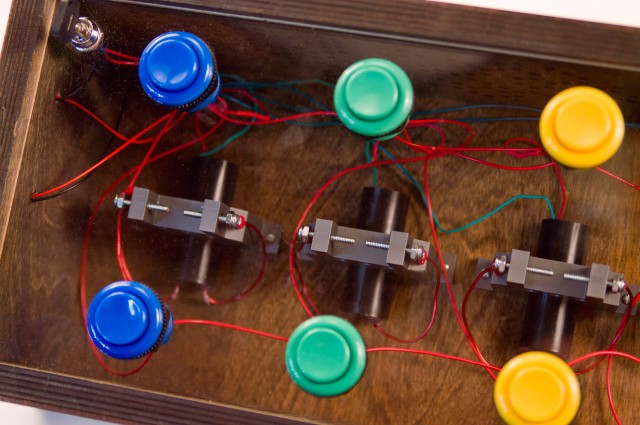 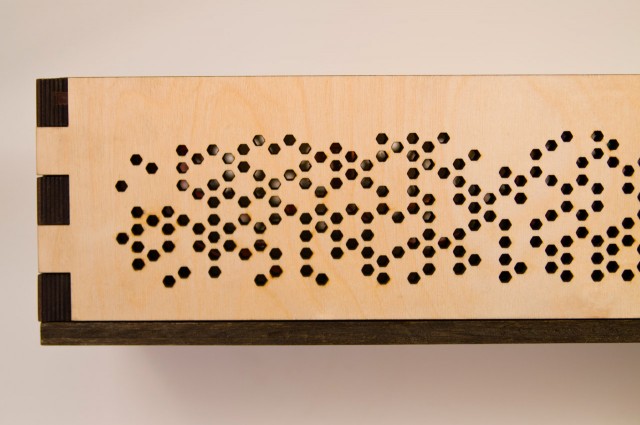 For the walls of the enclosure I grabbed some 16mm thick plywood from the scrap bins at Milwaukee Makerspace. There’s a local tool & die company that donates these pieces to us. They are long and skinny and always have these weird laser cut marking on them, because they use them for calibrating their lasers. I wanted to see if I could cut through the 16mm plywood with the 130 watt laser cutter I have access to. Indeed, it could! At 4mm per second, which is probably the slowest we should cut at. The cuts were not the greatest, but it was more a matter of “Hmmm, will this even work!?” than anything else. 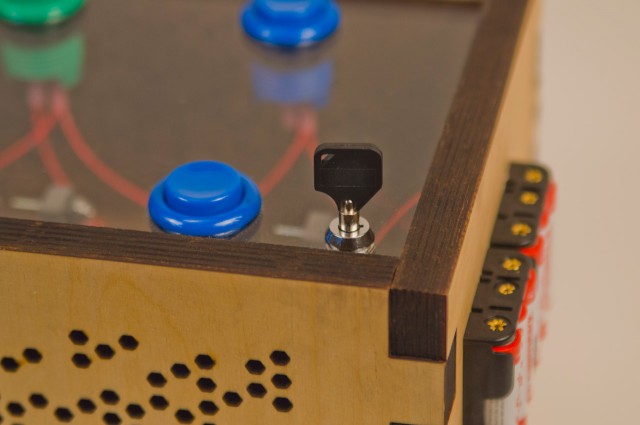 You’ll also notice the hexagonal holes on the sides. Those are “sound holes” since my first assembly demonstrated that the box fully closed up was too quiet, so I decided to add holes that the sound could spill out of. It also adds a nice look, and if you associate the “Buzz” in the name with bees, and notice the holes are hexagonal, well, it all fits.

I mounted the AA batteries on the outside so that you can easily see the power source (it’s interesting that 40,000 volts AC can be produced by just 4.5 volts DC) and so that I can easily change batteries without opening the thing. There are two battery packs because one tended to drain too quickly. I may add an AC adapter in the future so that I can convert AC to DC to AC.

(One more fun fact: The battery holders were one of the most problematic parts of this project. I wasted more time trying to get these cheap battery holders to work. The spacing and springs kept making it so the batteries did not make good contact. I started with a 5-pack of battery holders and trashed two of them just trying to modify them to work. Luckily I got two of them working well enough.) 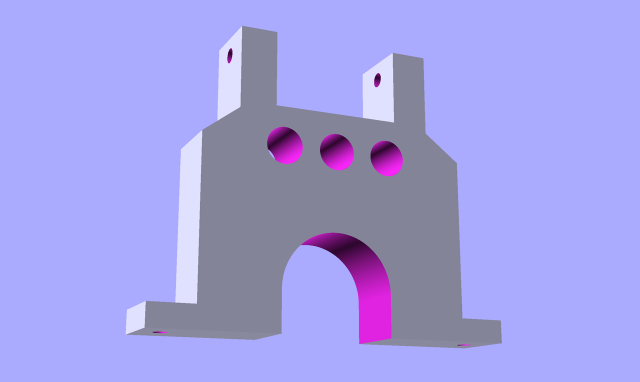 I designed and 3D printed the parts that hold down the high-voltage generators and also allow for bolts to be inserted to carry the electricity. (The design of these parts was inspired by the structures that hold overhead power lines.) The bolts can be screwed in or out to adjust the gap, which gives different results for the zap. I started with the narrowest gap and then did the widest gap, and then calculated the three distances in-between. (For the widest gap, you don’t want to go too wide, because if it can’t properly spark, it’ll burn out the unit.) 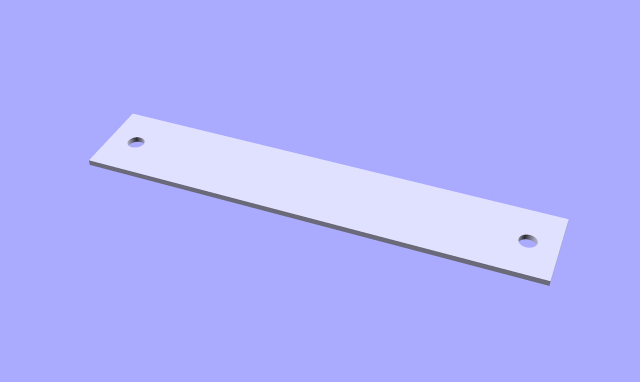 As you may know, I design 3D objects with OpenSCAD. Once I had my object completed, I did a projection to get what it would look like from a top view. This is the 3D version of that. 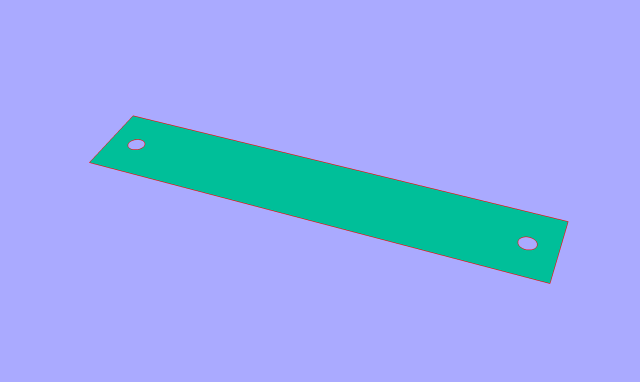 I then render it into a 2D version I can export as an SVG file. This allowed me to easily do the layout needed for the laser cut parts.

Here’s a top view. The reddish parts will be cut from the top clear acrylic panel and hold the buttons as well as an old SparkFun key switch I had in my parts bin. The grey pieces are for the bottom part of the enclosure which hold the high-voltage generators and the mounts. I ended up printing a full-scale paper version and using it as a template to mark the holes that needed to be drilled. It did not have to be prefect, so close enough was fine. 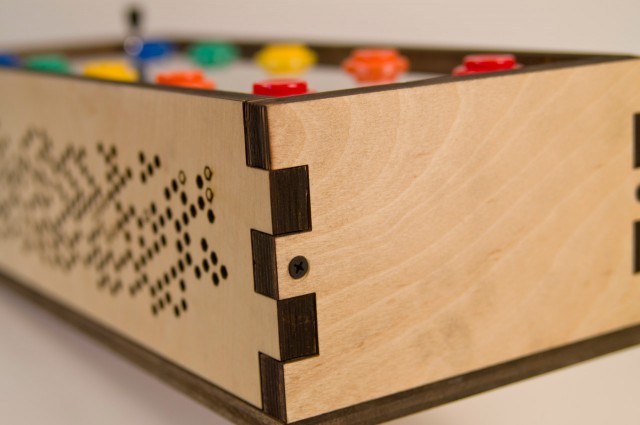 For the construction, there are some screws on the bottom to hold the bottom pieces to the two side pieces, and then the front and rear panels can slide into place and get held in by just one screw on each side. This is not the most elegant, but I realized somewhere along the build process that I did not have a good way to complete assembly or take it apart. This is what I came up with, and it worked well. 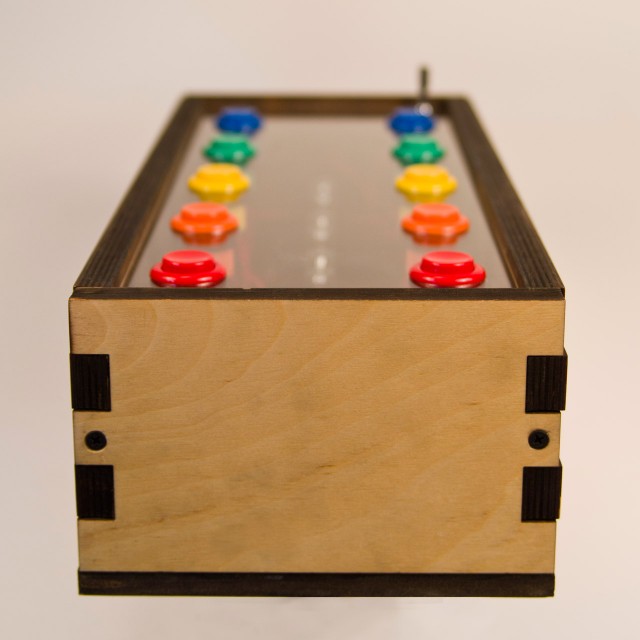 I used two contrasting stains, for a light and dark look, which I think matched the burned laser cut edges, and allowed for making the inside of the enclosure dark so the zappers could light up the inside. 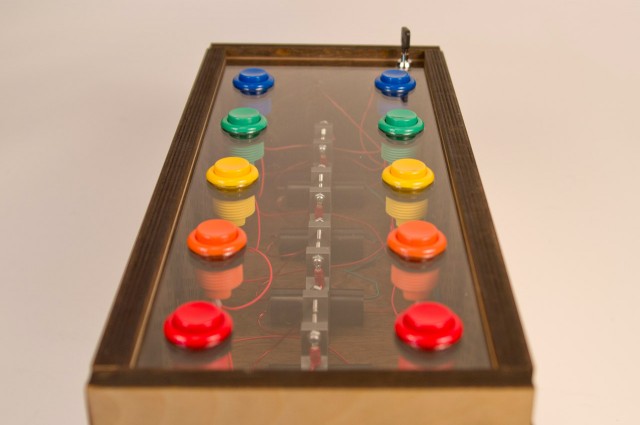 If you’re wondering why there are two rows of buttons, I really liked the symmetry, but I also wanted something I could use when displaying at a table, so that if you’re behind the table talking to someone, you can demo it and press the buttons on your side, and they can try it with the buttons on their side. (In the museum exhibits business we try to make things that are not single used components, so that more than one person can engage with a thing at a time.) 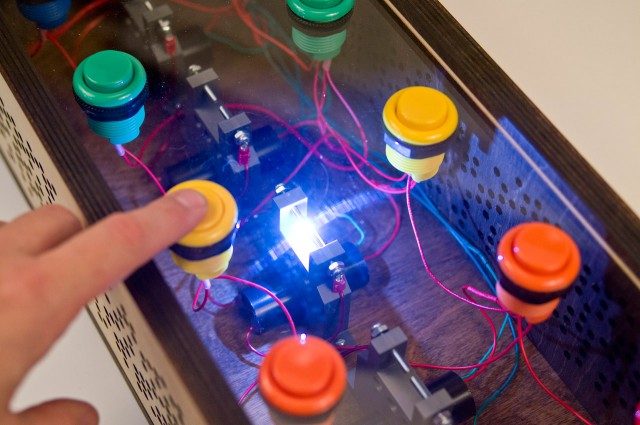 While this was a bit of a rush to get done by Bay View Gallery Night, and like most projects, there are things I maybe would have done differently (or at least in a different order) I’m really pleased with how it turned out. I also brought it to Milwaukee Makerspace to show off and got a lot of positive feedback.

Here’s a video showing operation of the BuzzBuzz. It was difficult to capture on file (well, solid state memory) exactly what it looks like, so this is an approximation. You’ll probably want to see it in person to appreciate the full power of this device. 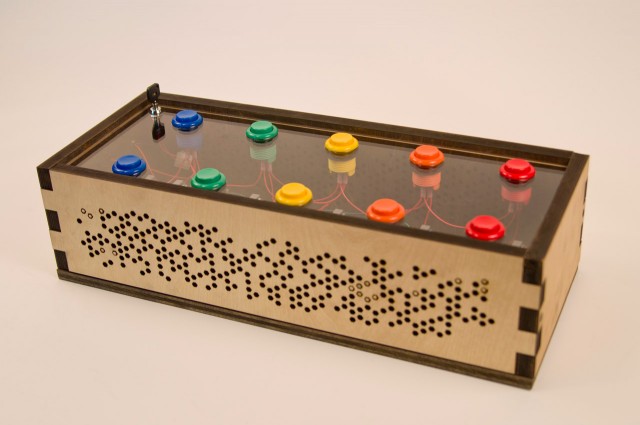 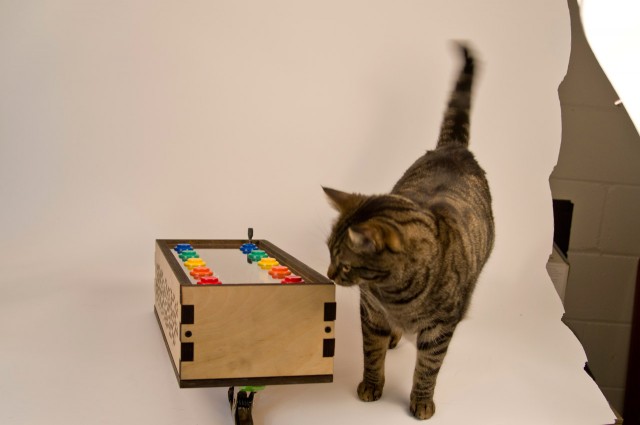