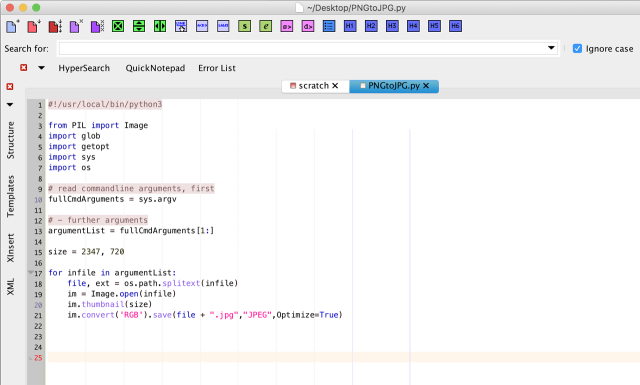 My journey to Python continues. I’ve been playing on a Raspberry Pi project and it’s been working quite well! In the meantime, I’ve still got work to do, and lately (at work) I’ve had to deal with a lot of screenshots that get emailed, and when I started it was just a few, so I’d open the PNG files in Photoshop, resize them, and save them out as compressed JPG files. This started to get painful as I had to do more of them, and as a fun little comparison, while Photoshop CS5 runs quite fast on my 2012 MacBookPro, Photoshop CC 2019 is terrible on my 2017 iMac.

Side-rant: I hate Adobe’s forced subscription model, and Photoshop CS5 does most of what I need to do. Adobe’s Creative Cloud is caught in an forced update cycle where they have to add things, many of which may not be useful (to you) and are probably resource hogs, too. CC 2017 was quite a bit faster than CC 2019. (End of rant!)

Anyway, back to Python. Since I’m often looking for excuses to write Python lately, I checked to see if there was an easy way to resize images and convert from PNG to JPG. There sure is, and it took me just a few minutes to find some working code. This sped up my screenshot situation quite a bit! The one hiccup in finding Python example code online is that it’s often for Python 2.x instead of Python 3.x and needs some minor adjustments. 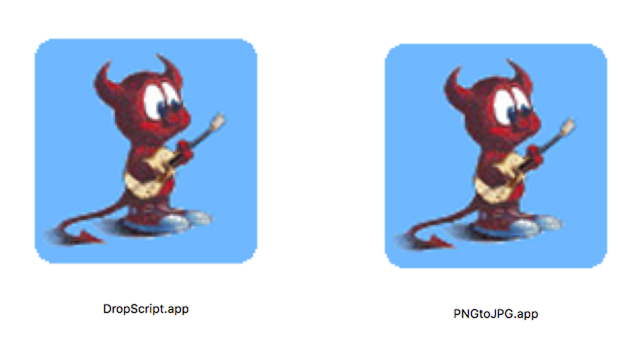 While typing Python commands in the terminal was working fine, I’ve been around the block before with this sort of thing… In fact, in 2012 Wilfredo Sanchez put out DropScript and I used it for many Perl scripts to make my life easier. Luckily I wasn’t the only fan of DropScript, and there’s a modern version of DropScript! Oh yeah, so the way it works is that you can take a script (written in whatever language) and make it run when you drop files on it. It’s a customizable droplet. I remember I had a big folder full of droplets for web development and file management. It was handy.

So it took another 10 minutes, but I converted my Python script to a DropScript application so now things are even faster… drag and drop, no typing!

I still need to make my Python a little more accepting. For instance, I have to drop files on it, but it would be nice to be able to drop a folder full of files onto it. Baby steps, right? I’ll keep hacking away at Python as I get time. And I will admit, the cleanliness of Python is sort of nice…