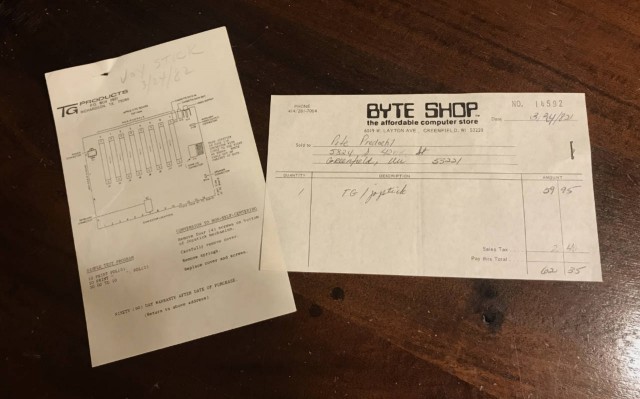 Back in the 1980s my brother bought an Apple ][+ from a local computer store called the Byte Shop in Greenfield, Wisconsin. (And yes, there were other stores that used the same name.) I was lucky enough to be able to use the Apple ][+, and learn about computers and programming, and it was the start of my journey of understanding and using technology that has been part of my life for the past 40 years.

My brother recently gave me the receipt for the joystick I purchased in 1982. Yes, this is what 12 year old Petey was saving his money for, an analog joystick made by TG Products from Richardson, Texas. (And you knew it was from there because it was printed right on the top of the enclosure.)

I remember a lot about this joystick and using it with the Apple ][+ at the time. Computers were so scarce back then, and I don’t think anyone else I knew at school had one at home. I did my best to treat the computer with care, and even to this day, I’m sometimes shocked at the way people treat their technology, as if it’s disposable… but maybe that’s just how it is today, with computing devices being so ubiquitous and easily replaceable. 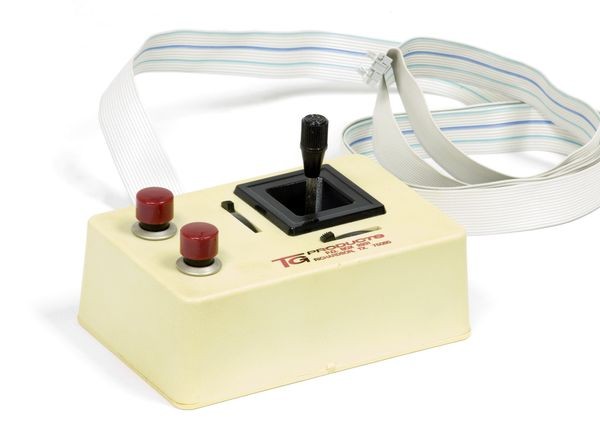 Above is a great photo of the joystick that I borrowed from the Computer History Museum’s web site. Those buttons are still available, and I’m pretty sure I’ve used them for projects. (I may have even bought some from Radio Shack back in the day.) Also, check out that awesome ribbon cable! (Hey, it was an analog device.)

I did a bit of searching for this old joystick and came across a few links. Here one from a Vintage Apple site. It’s a bit weird because it’s extra long… what’s up with that? Well, see this tweet for some interesting info on that.

I found a few other TG Products online as well. There’s also a TG joystick at The Strong (which I wish I had known when I was there two years ago.)

And this one is a little weird… It’s a Super Game Stick for Apple II I found on Amazon which is obviously a clone.

Well, you know what they say… you can’t ESC your past.

That’s about $165 in today’s money, which today would buy a Kindle tablet