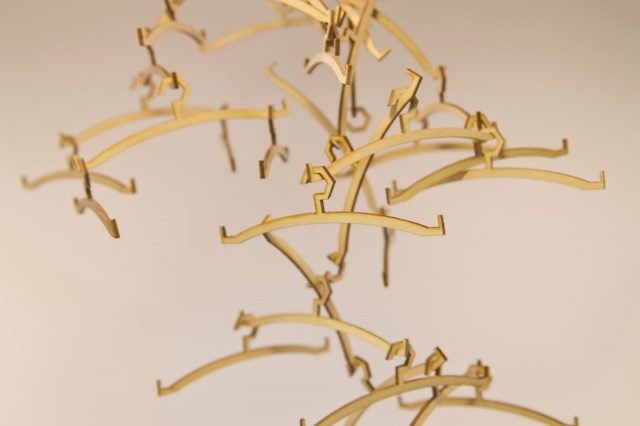 Back in 2018 while at Brinn Labs I was tasked with doing a mobile activity (the kind of mobiles you hang, not the kind that are British cell phones) and I came up with an idea based on the work of Man Ray, specifically his Obstruction sculpture. 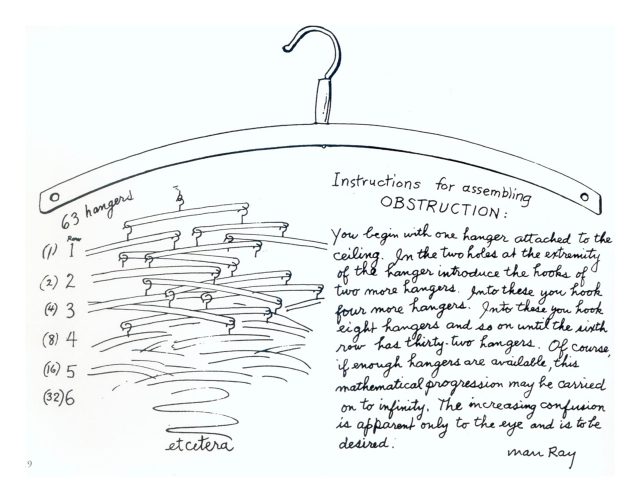 I designed a hanger that could be fabricated at a small size (approximately 5″ x 1.5″) and could hang more hangers from the ends. Man Ray’s version used full size hangers that had wire hooks and holes on each end of the wooden part which made it easy to link them all together. Mine was a bit different with a simpler one-piece design. I assume the hangers Man Ray used could swivel completely around, which is an added bonus my version would not have. (But there’s always more than one way to do it.) 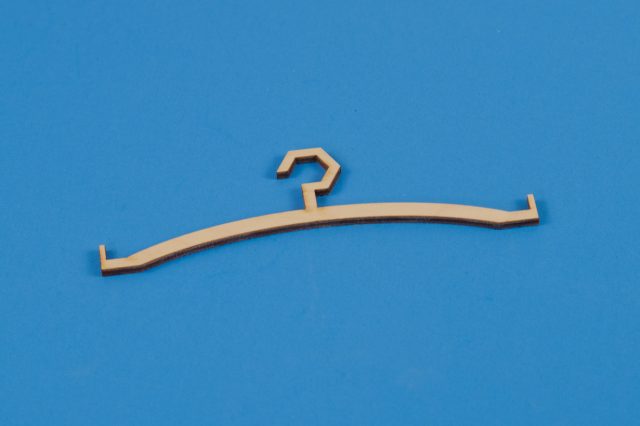 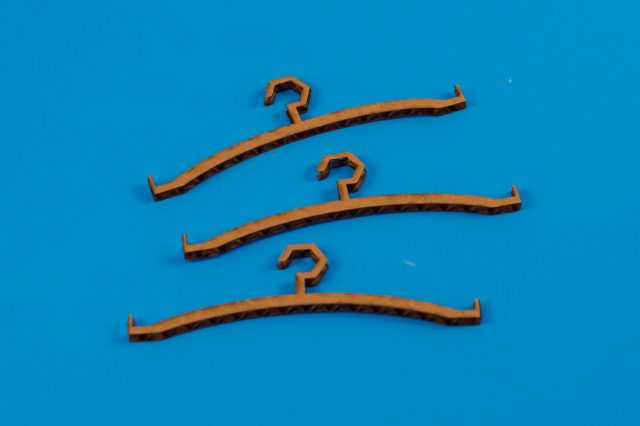 I should note that I originally tried using corrugated cardboard, which is even more abundant than 3mm Baltic Birch plywood. While it sort of worked, it depended a lot on exactly where the corrugation was after cutting. I abandoned the cardboard version after a few tests. (If I had made larger hangers I think the cardboard version could have worked fine.) 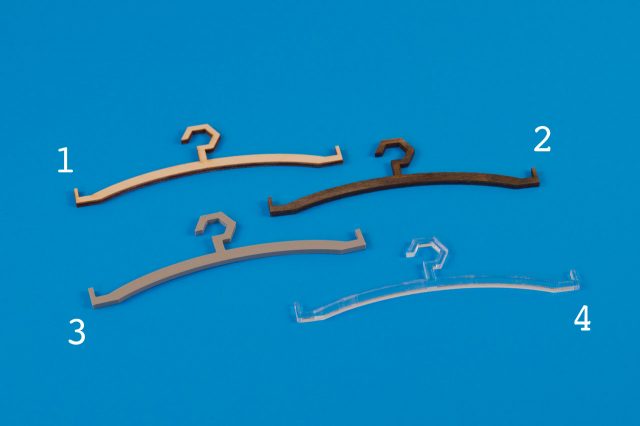 Because the hanger was a simple 2.5D object I also created a 3D printed version of the hanger… like many of the things I create I tend to come up with ways others could make them depending on the equipment they have available. If you don’t have a laser cutter but do have a 3D printer you can still easily create a bunch of these. 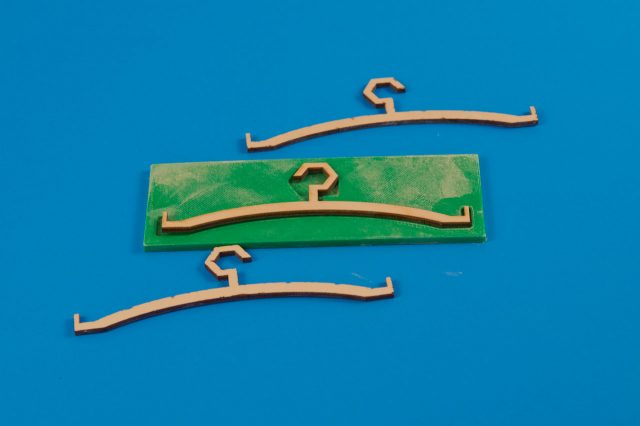 Since I was working towards making a lot of hangers for an event I just cut them all quickly on the laser cutter and didn’t pay much attention to quality, so the backs of the wood hangers got a bit charred from the honeycomb bed. This is the part where it shouldn’t matter, but sometimes things bug you… so later I ended up designing a small jig to hold the hangers so I could sand them and make them look nice. I don’t know why I torture myself… I hate sanding. 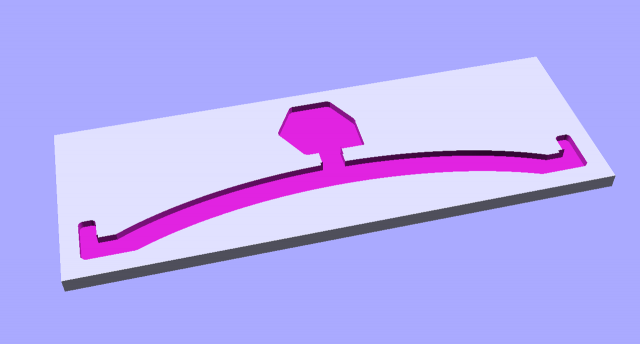 Designing the jig involved creating a slightly larger version of the hanger and then differencing it from a small rectangular shape, then 3D printing it. It worked well to hold the hangers in place while sanding them, but in the end staining them a darker color was much easier. (Again, I really hate sanding.) 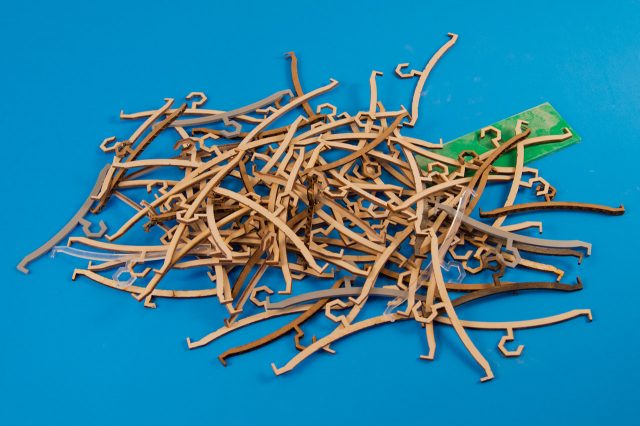 When I made the hangers I sort of envisioned it as a game where one or more people would try to build the hanging structure without it falling. Sort of a reverse Jenga perhaps, or maybe more like Barrel of Monkeys though I’ll admit I was completely wrong about how you play Barrel of Monkeys, and this video shows the correct way. 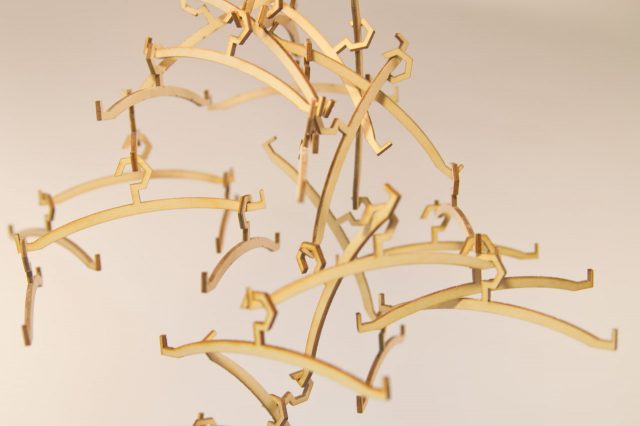 Overall I’m fairly pleased with how this projected turned out. Oh, I should note that the hexagonal tops on the hangers were mean to mimic the hexagonal logo of Brinn Labs. they could certainly have been more rounded or another sort of shape. Who knows? I may redesign these hangers in the future after a bit more prototyping. As I mentioned, this was a quick project and once I got a working hanger I just kicked out a bunch. 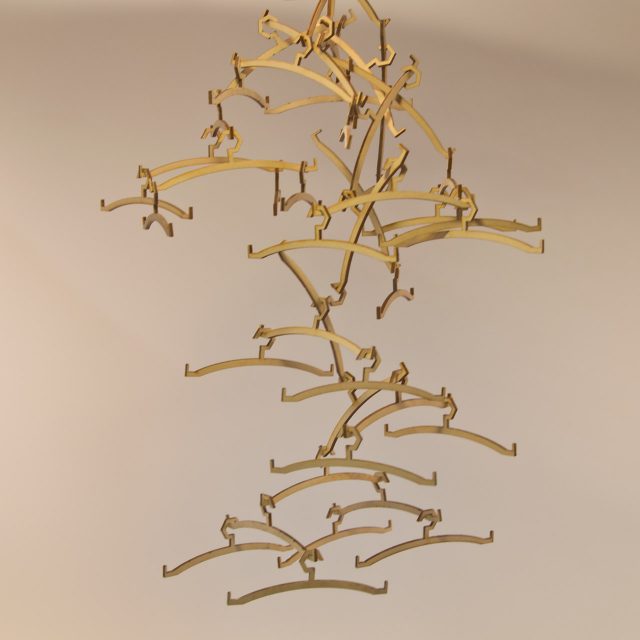 I hope I was able to create the “increasing confusion” that May Ray talked about in the instructions for Obstruction. It’s certainly a bit confusing when you are creating the structure, and at times I wished I had a helper to attach two hangers while I was attaching two hangers. 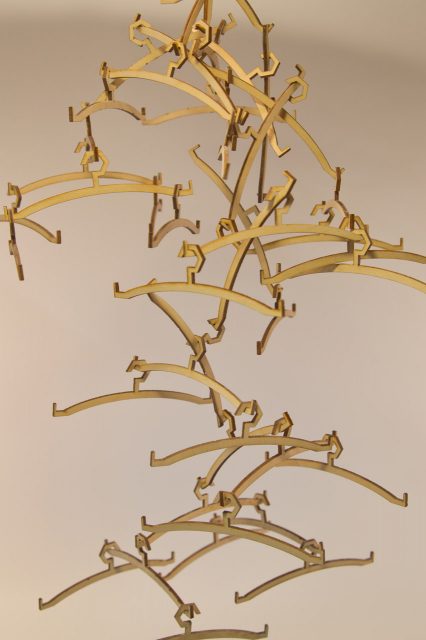 I’ll probably get around to releasing the files for this in case anyone else wants to do something with it.