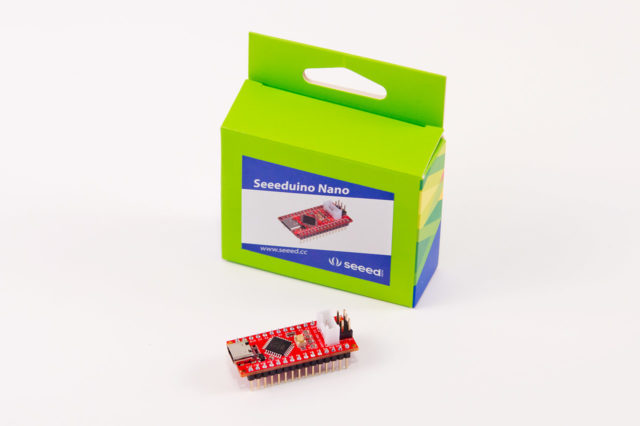 The folks over at Seeed Studio sent me a Seeeduino Nano to check out. I’ve used a lot of Arduino boards over the years, including plenty of cheap Arduino Nano clones. Most of the clones have worked fine but every now and then I’ve seen a bad one come through. The Seeeduino Nano is a nice quality board with a little extra to make it useful for beginners or people more interested in making things quickly/easily than they are soldering wires. 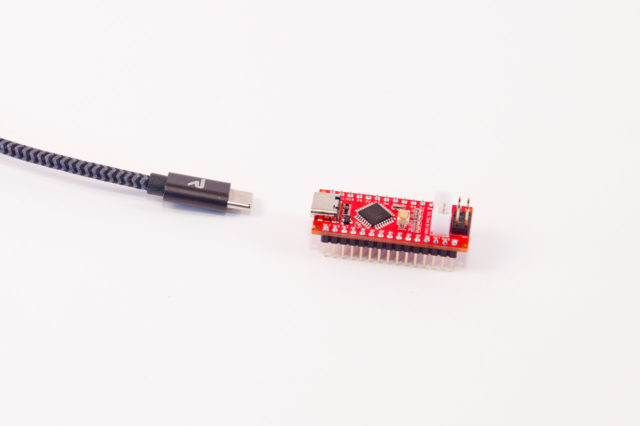 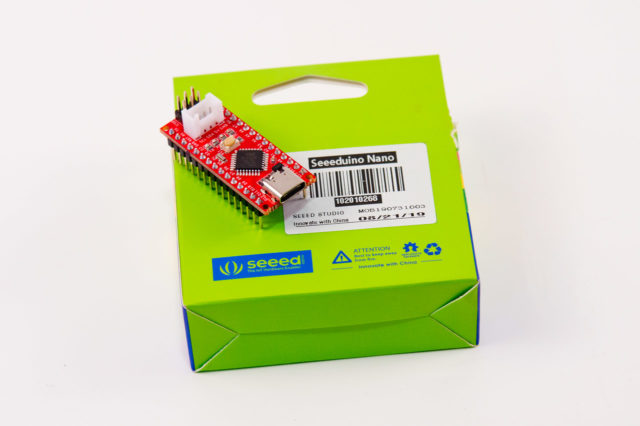 My favorite part about the packaging of the Seeeduino Nano is the warning on the back that says “Best to keep away from fire”, mainly because I’ve worked on multiple Arduino projects that specifically involved fire… But I digress… for most people keeping away from fire is probably a good idea. 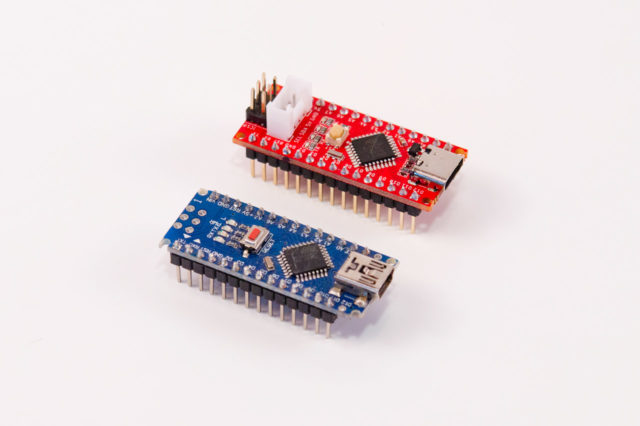 Here’s the top view of the Seeeduino Nano next to a ELEGOO Nano board. You can see the difference in the USB connector and a few other features. One difference with the ELEGOO boards is that they come with the header pins included but not soldered in place. (Here I’ve soldered them to the board.) There are times when you don’t want header pins solder into place. My guess is that for the target market of the Seeeduino Nano, the pins already installed makes sense. 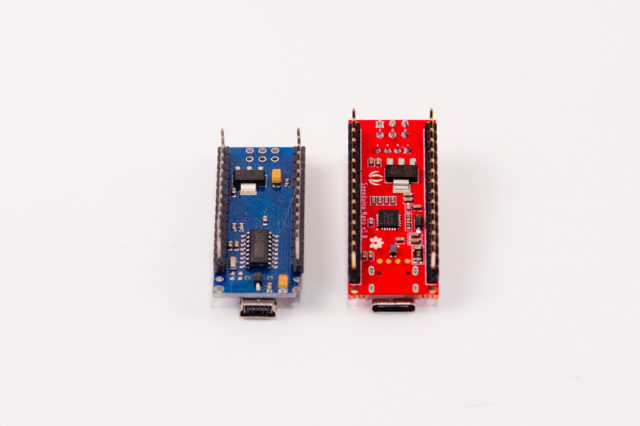 Another thing about the ELEGOO boards is that I can’t easily find them listed on the web site. Here’s a post about them, but in the past if I’ve purchased them I’ve found them on Amazon for a price close to the Seeeduino Nano, though I’ve only seen them as a 3-pack.

(Note in the photo above the boards are the same dimensions, the Seeeduino is just on an angle due to the extra connectors on the top.) 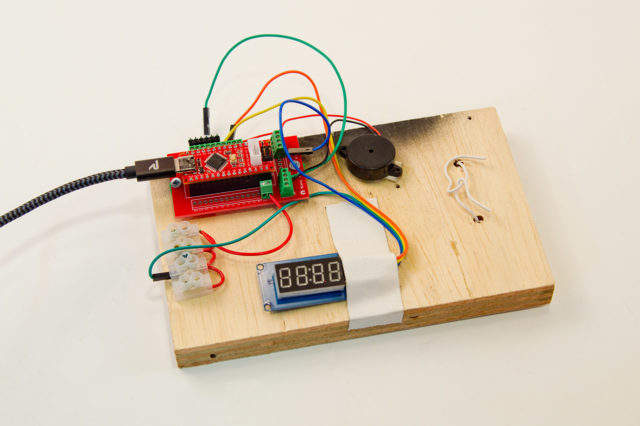 Since I had a project already done with a Nano in place (via my Anrduino Nano Breakout Board) I just swapped in the Seeeduino Nano, uploaded the code, and it worked great. 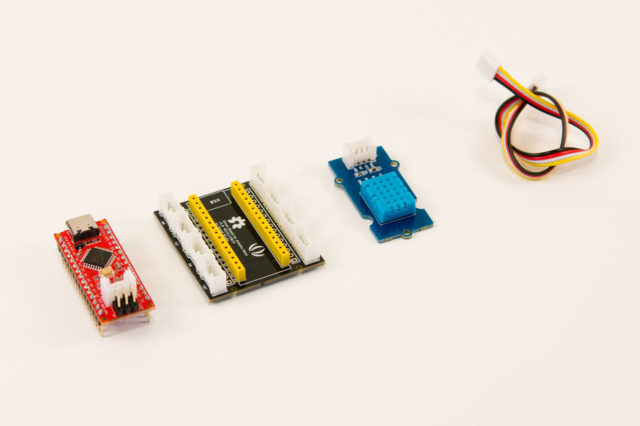 Where the Seeeduino Nano really shines is the capabilities it has with the Grove system from Seeed Studios. If you don’t want to solder, and also don’t want to stick a lot of wires and components into breadboards, the Grove system might be what you are looking for. Again, I see this is a match for those who are more interested in the code than the wiring of electronics, or for workshops where soldering might be a concern (with kids or those not able to solder for other reasons).

In the photo above you’ll see the Seeeduino Nano along with the Grove Shield, a Temperature & Humidity Sensor, and a connector wire. 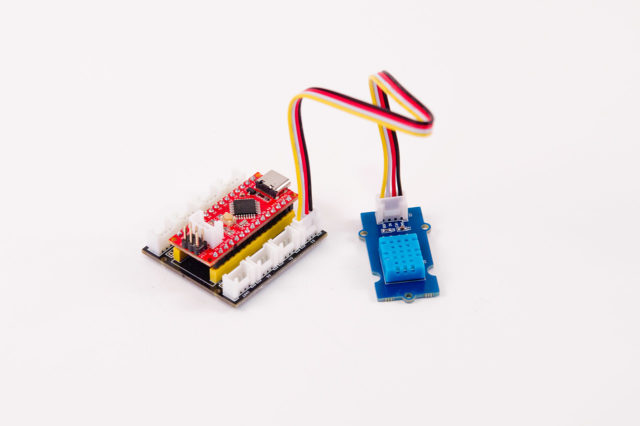 It’s also worth noting that the Seeeduino hardware and Grove system are open source, and others have embraced Grove. Adafruit has a Grove Shield for Particle Mesh and Feather Boards.

Above you’ll see the Seeeduino Nano plugged into the Grove Shield which has a Temperature & Humidity sensor attached. This takes seconds to connect versus soldering things or plugging things into a breadboard. When I taught basic Arduino classes I always told students to unplug their Arduino when they wired up the breadboard, and then to double-check the wiring for errors before plugging in the board again. The Grove plug-in system eliminates much of that guesswork. You can’t really plug things in backwards. 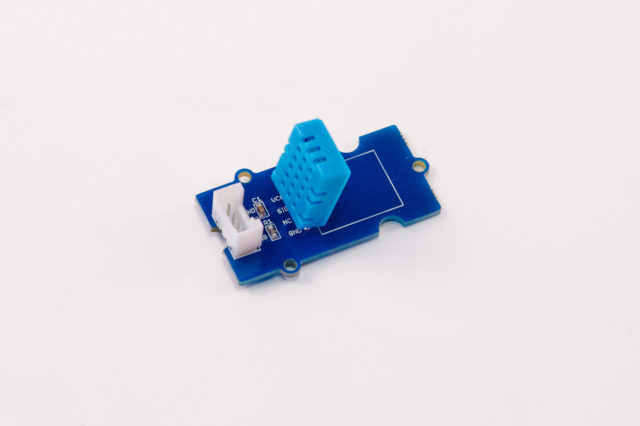 Here’s the Temperature & Humidity Sensor. I’ve worked with logging temperature and humidity before, so I’m not really new to this. The new part is the simplicity of just plugging things in. 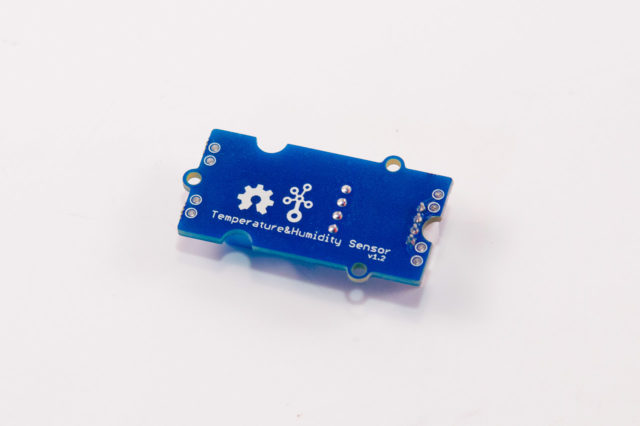 I grabbed the example code Seeed Studio provided and had a few issues. Nothing I couldn’t fix, and I did open an issue about it. In the end I grabbed Adafruit’s library for the DHT Sensor as well as the Adafruit Sensor library (which is required by the DHT library) and got things up and running. If you’re not interested in downloading zip files from Github you can also install these libraries right from the Arduino IDE. 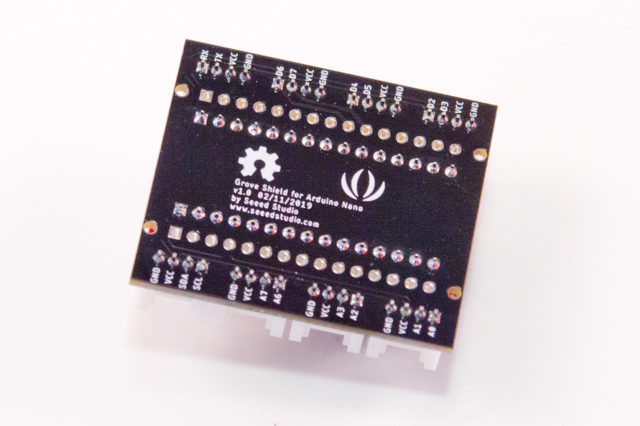 Overall the Seeeduino Nano is a good quality Arduino board, and the Grove system makes it very easy to get up and running. In this specific test I did run into some trouble with their example code, but in most cases those issues are solvable, and there’s probably an alternative example or library out there that will do what you want or need.

Finally, here’s a short video of the game scoring system I mentioned above. The Seeeduino Nano is taking input from a number of pins (that will eventually be triggered by switches or buttons) to keep score, where each pin is a different point value, and then using the piezo speaker to play a sound for each point value as well as displaying the points on a small LED display.