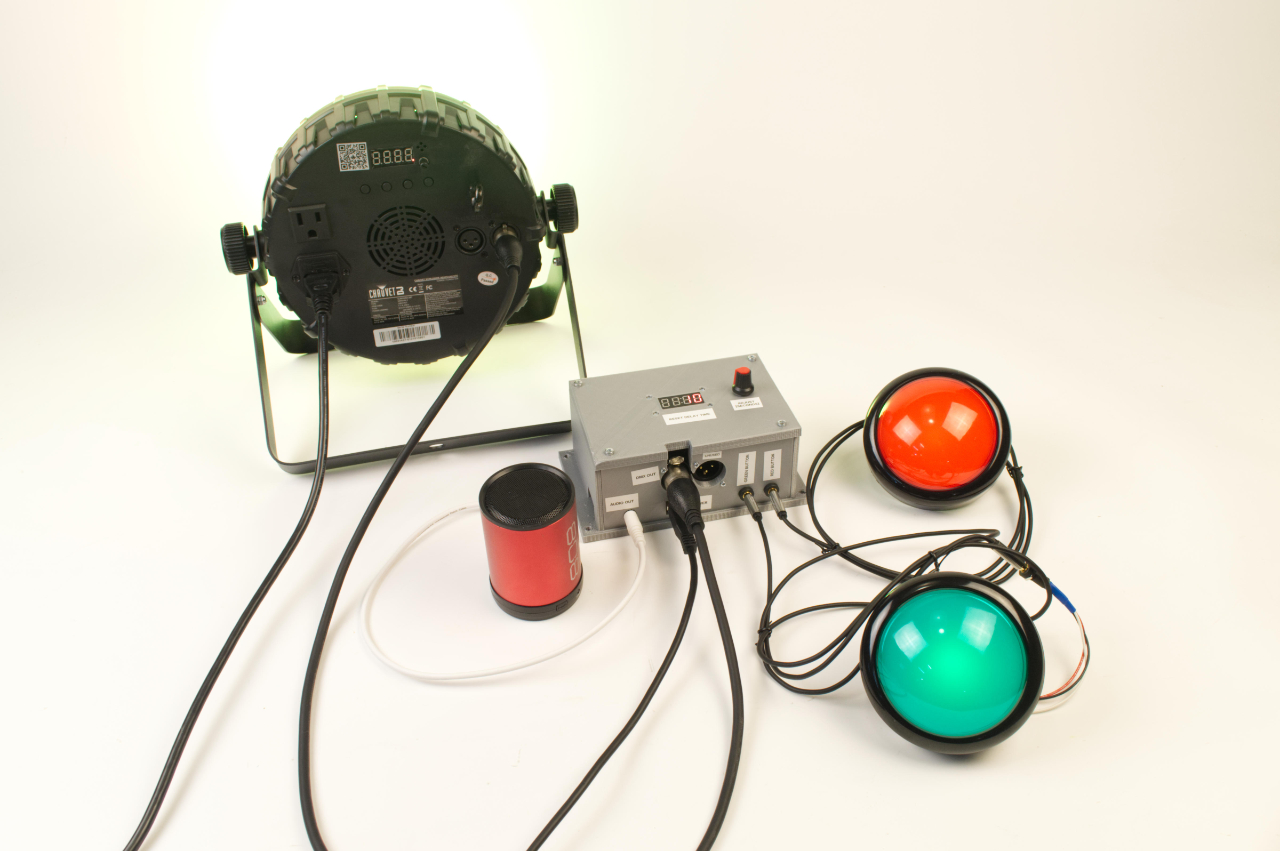 I recently completed a build for a client that I’m calling a “Game Show Buzzer System” because, well… that’s what they asked for. The requirements were a system with two buzzers, green and red, that when pressed each played a different sound. They also wanted a light controlled, as they were going to build this all into a podium for some game show broadcast on the Internet.

At first they asked for colored light strips, so I was going to use NeoPixels, but then they switched to wanting to control a DMX light. I didn’t have a DMX light handy so I got the cheapest one on Amazon to start doing development with. Meanwhile they shipped me a very nice professional DMX light. I got the code working on my cheap light, but once moved over to the good light it didn’t work without some tweaking. Different DMX lights operate differently, duly noted. 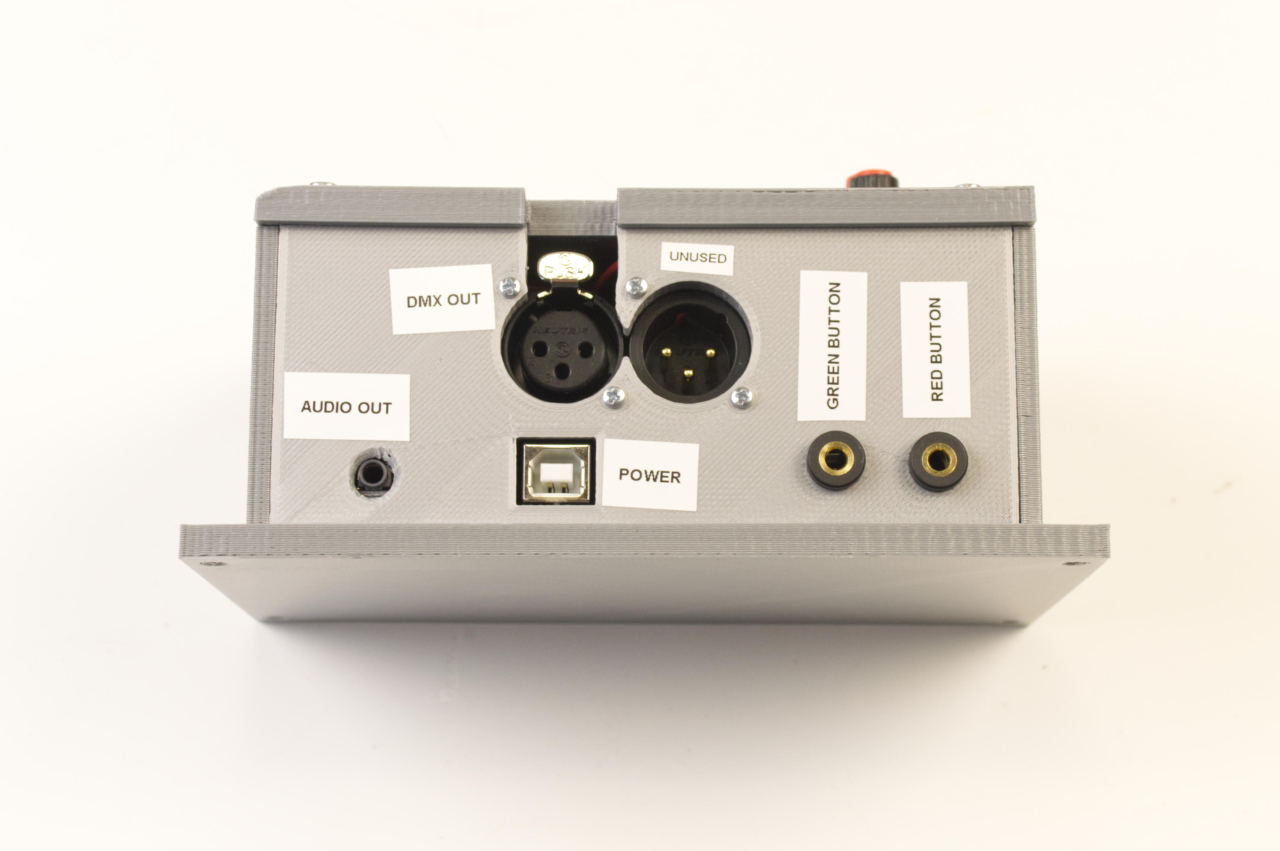 The electronics live in a 3D printed enclosure. This probably took more time than the code. (But since code is often reused, that’s not surprising.) This project came together pretty quickly, but if it hadn’t I probably would have spent more time on the enclosure. It’s not bad, it just has a few things that annoy me about it. Everything is labeled, which is good, because it is possible to plug the 3.5mm plugs into the wrong place. 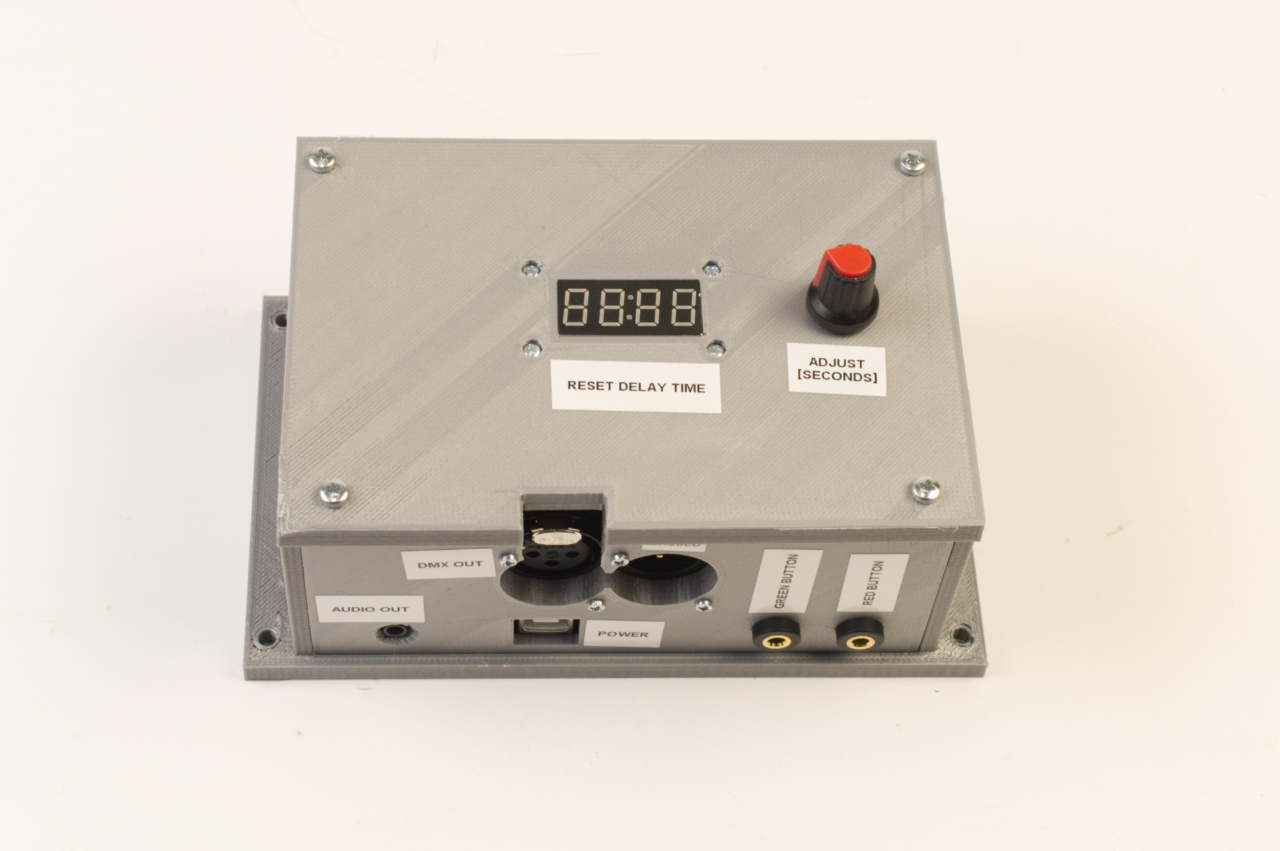 The top features a knob and small display which are used to set the reset time for the unit after a button is pressed. The client thought that 30 seconds for the reset might be good, but while discussing it there was concern that might be too long, so I suggested a way to adjust it. 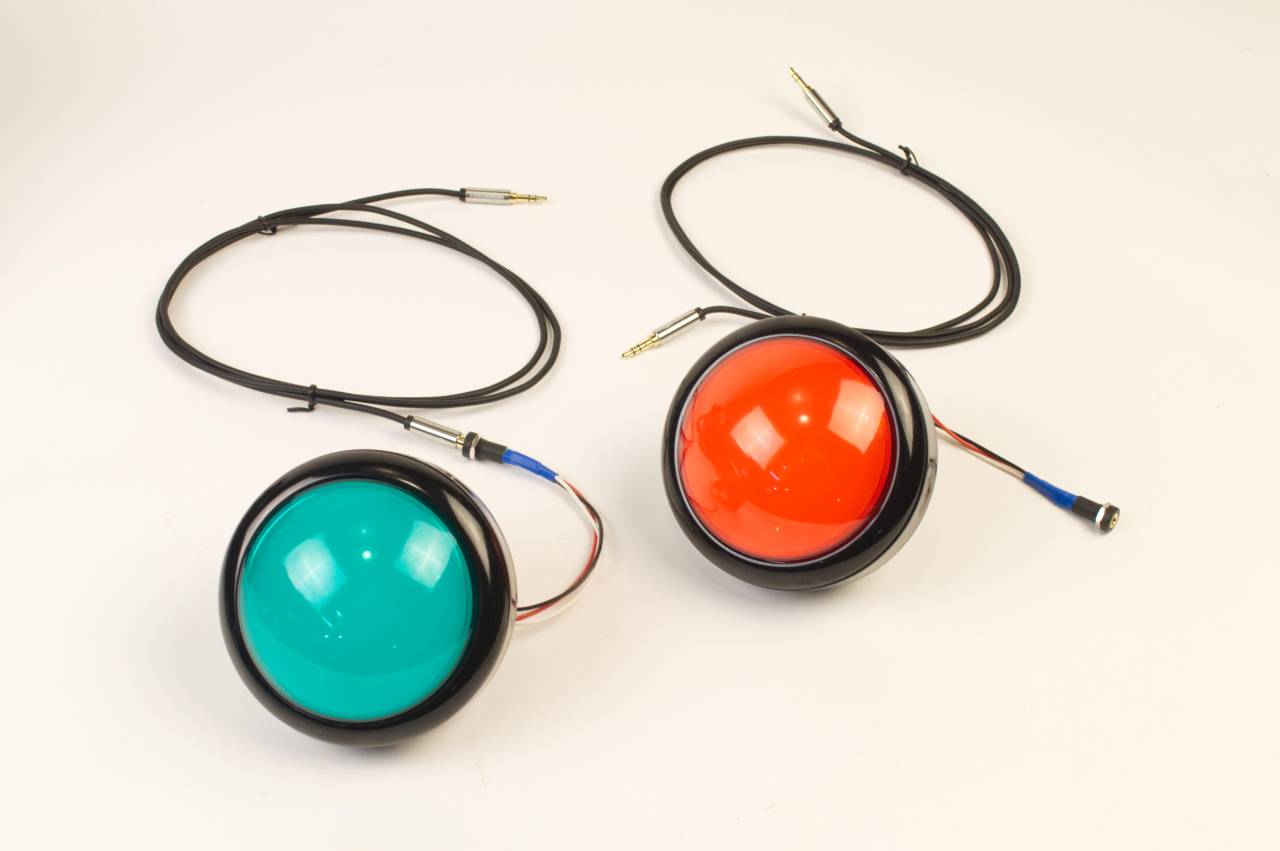 The large buttons use 3.5mm jacks and cables to connect. Since TRS cables have three connections, they’re perfect for items with GND, a button, and an LED. This also allows for the client to easily swap cables if these are too long or too short. 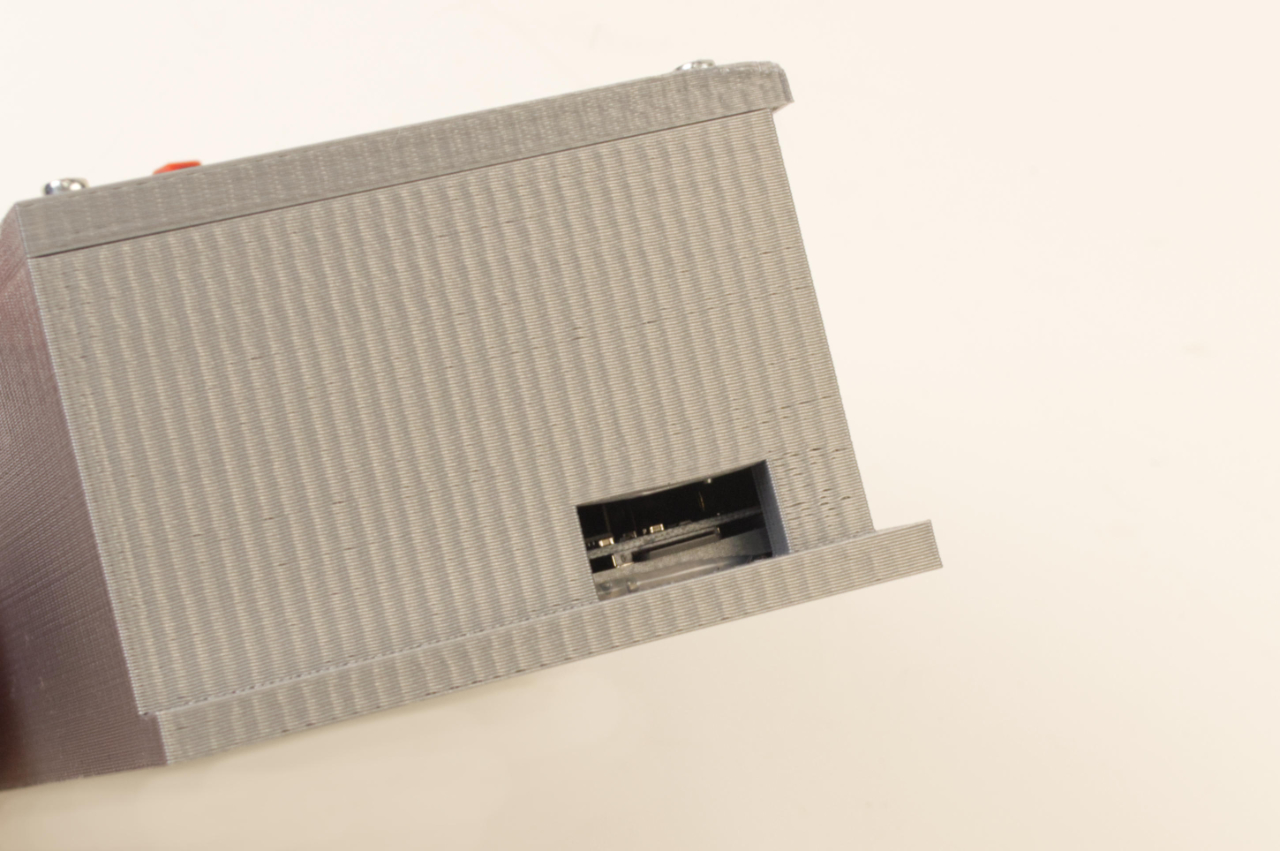 The client provided the sounds. (Well, links to YouTube videos with the sounds.) If they ever want to replace the sounds, or the SD card fails, it can be easily accessed. I didn’t have time to make a door or panel for this, so I covered it with gaff tape before I shipped it. 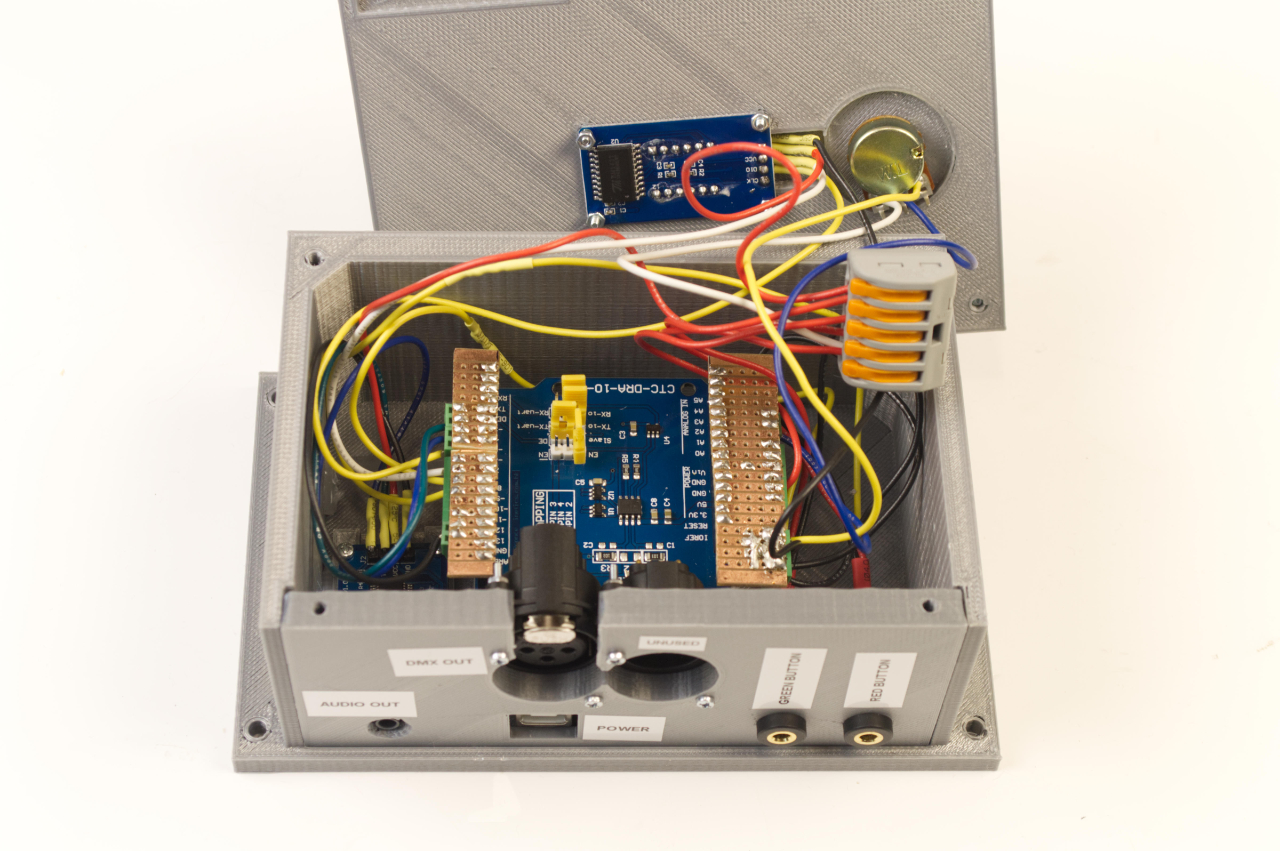 A peek at the inside. It’s a little tight, but there’s a lot going on in there. I ended up making my own “shield” to connect everything because, this was a rush project, but it all works, even if it’s not the prettiest thing I’ve built. I did about 4 days of testing before shipping it out. It all works, and it was a fun and challenging build. Neat!