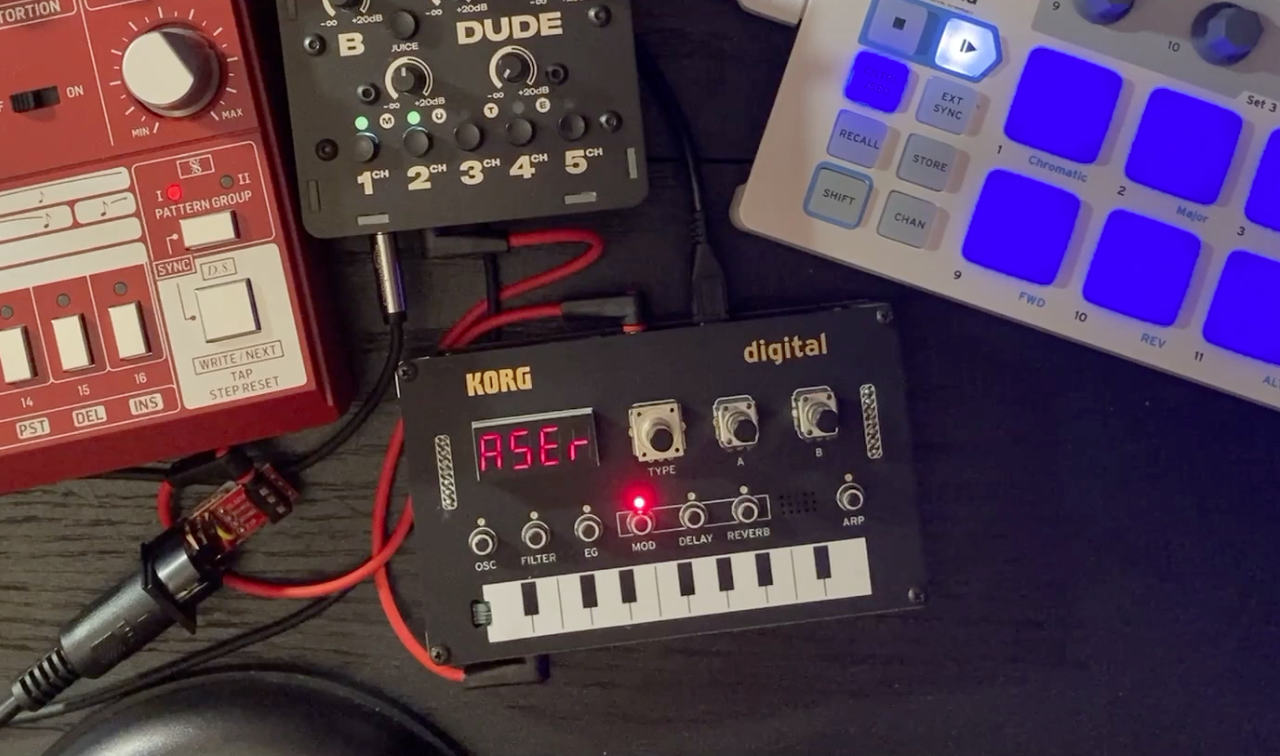 The Korg NTS-1 is a $99 digital synthesizer and effects box that is just straight-up awesome. It’s cheap, but packed with features, including the ability to load custom oscillators and effects, and there are a bunch of them out there for free and for a price. I’ve had a blast making noise with this thing, and there are a few groups online for discussion of the NTS-1.

The NTS-1 is a kit you build yourself. Don’t worry, it just requires a screwdriver (which is included) and it’s really just assembling the enclosure around two circuit boards. Takes about 15 minutes if you go slow. Where the NTS-1 does not shine is in its durability. This is not a device you just toss into your bag, or that can easily travel to a gig. It is… fragile. The main fragility (as many will attest to) is in the connectors. So I’ve tried to strengthen them a bit. 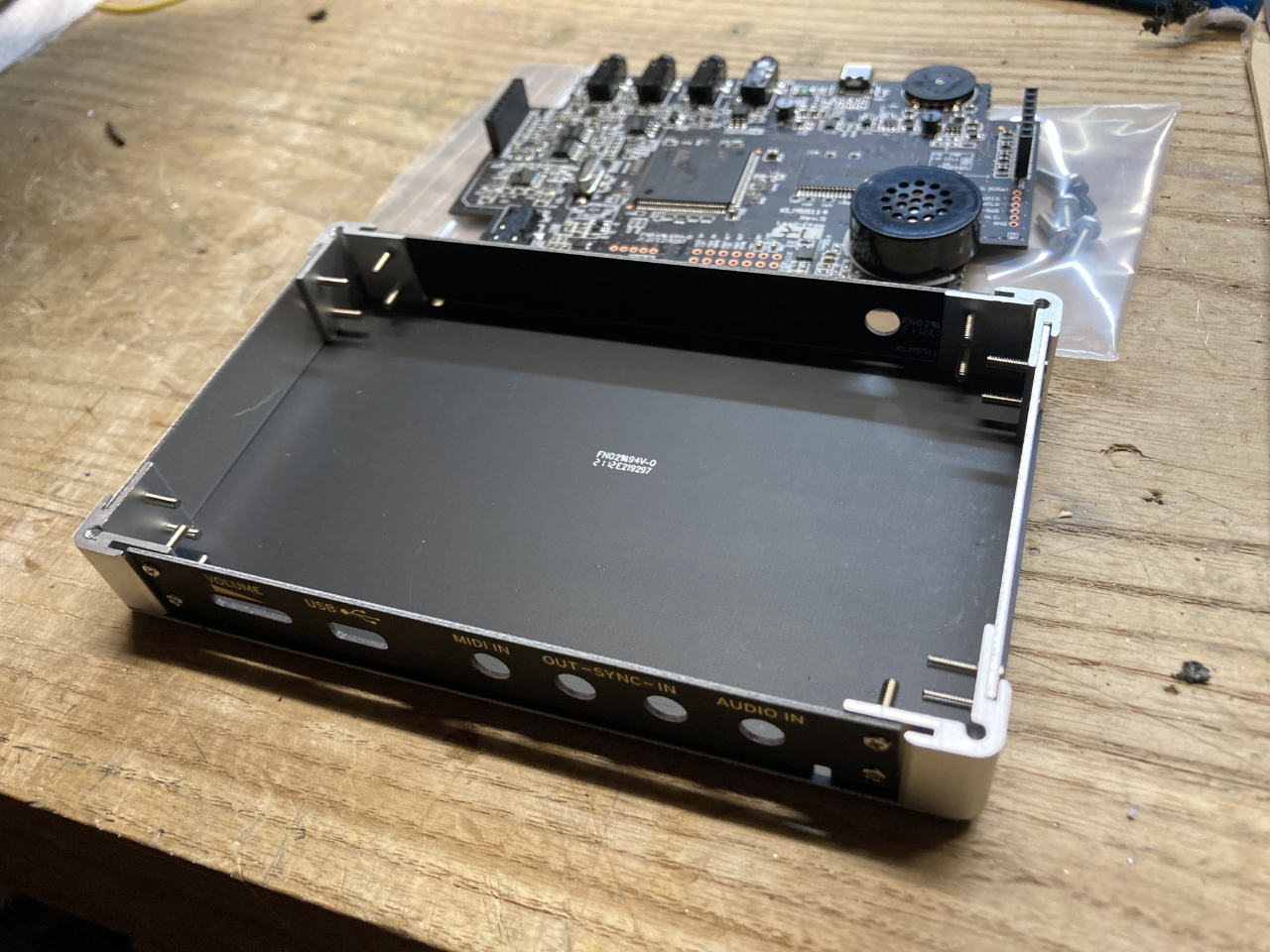 I started by taking the unit apart. Well, just removing the top panel and top PCB. The rest of the pieces of the enclosure can stay put together. 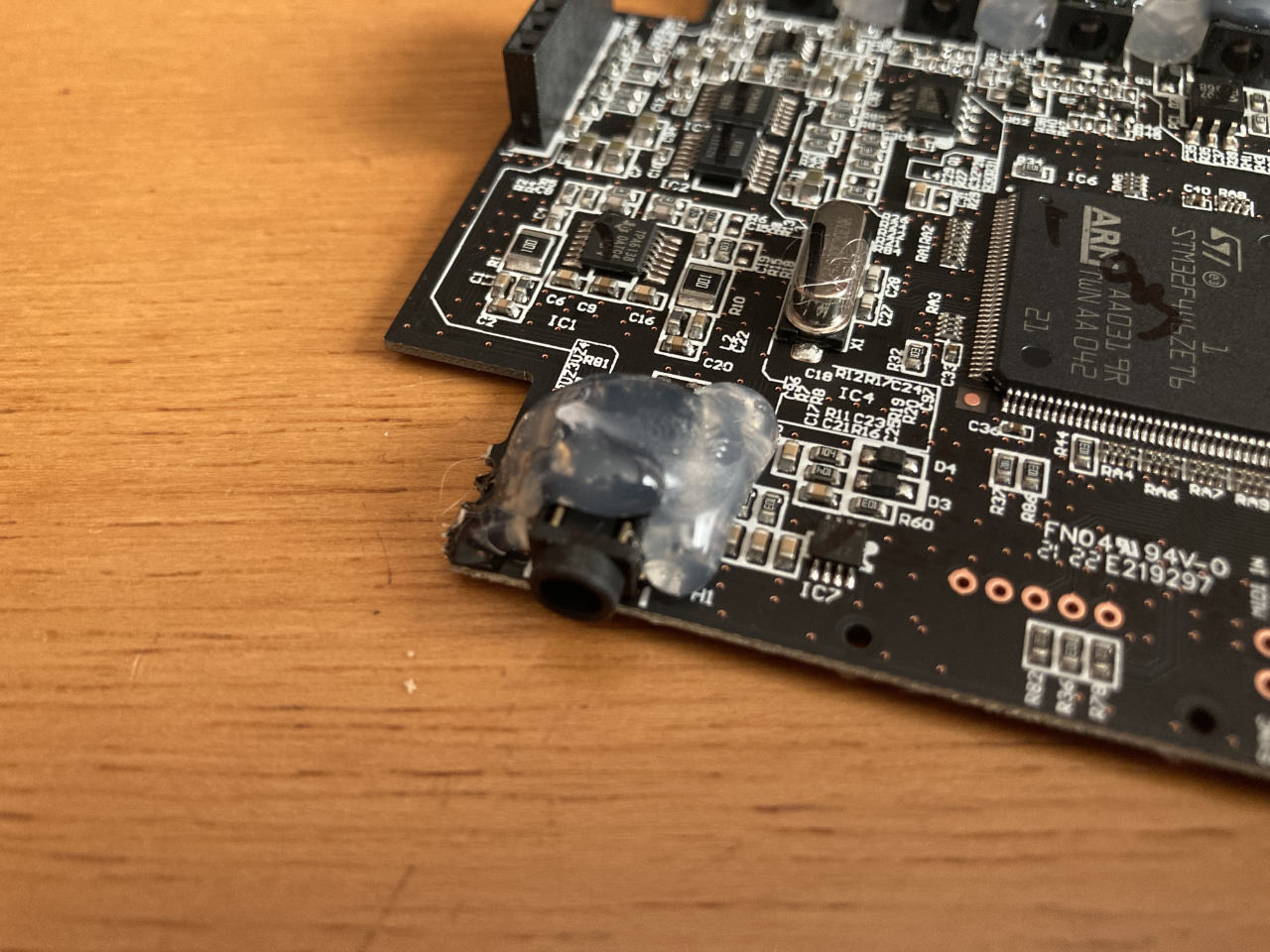 The 1/8″ jacks are soldered on as surface mount components. This is pretty terrible, as they really should be through hole components to help provide a solid mechanical connection to the PCB. I’m sure it was done this way to keep things cheap. The problem is that if the jack pulls off the board it will probably pull off the solder pad as well, so you can’t really replace it. Sigh. I added a bunch of hot glue around the headphone jack. Some have questioned if this will do anything. I figure it’s better than nothing. 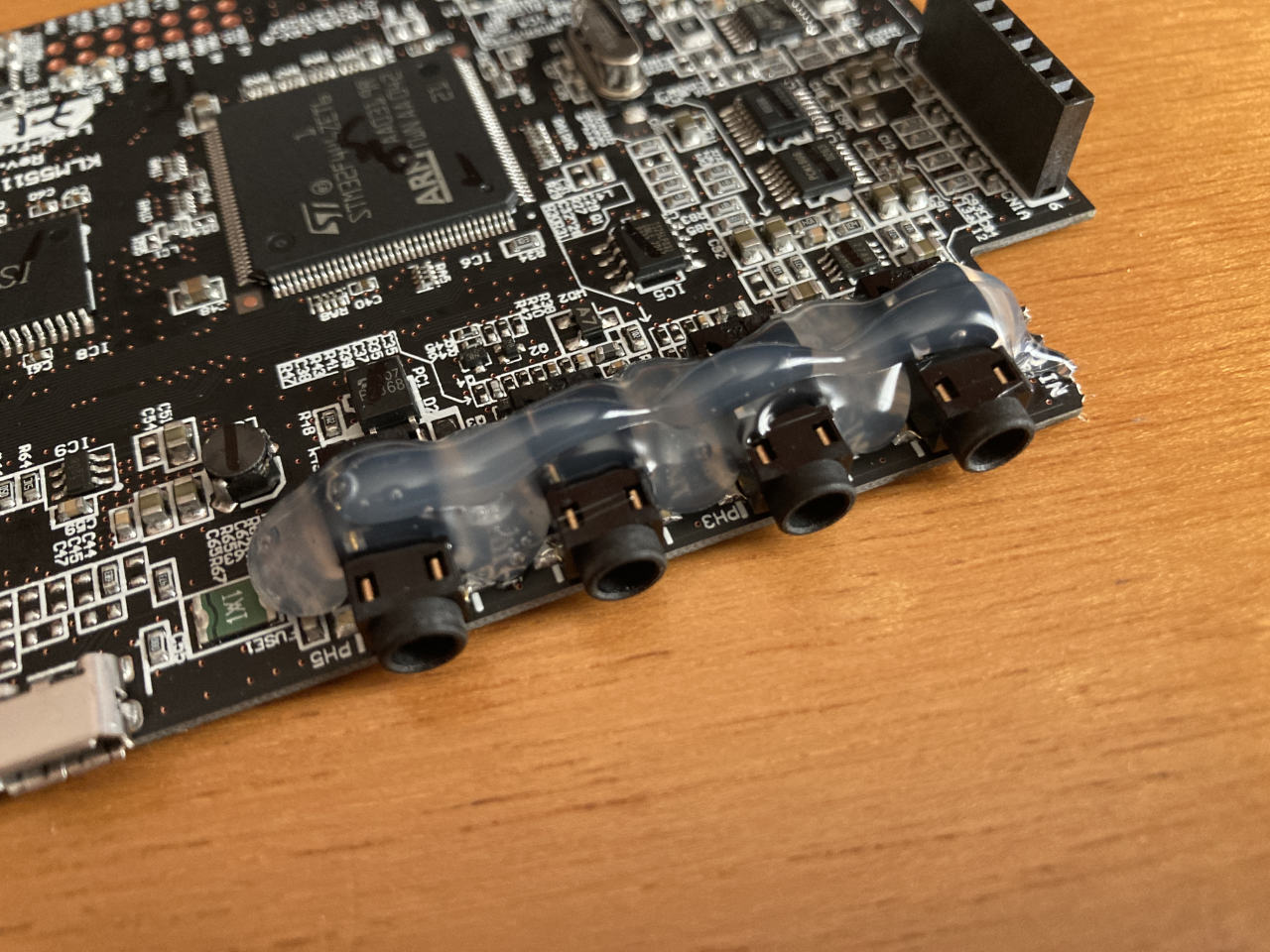 Here’s the same treatment to the other jacks. (MIDI in, sync in & out, and audio in.) Just lots of hot glue. Basically the more you plug and unplug things with these jacks the more stress they’ll be under. I’ve seen at least one person build a larger case around their NTS-1 and then use panel mount plugs so they aren’t repeatedly plugging and unplugging from the jacks on the unit. It’s a good solution but does increase the size of the unit. 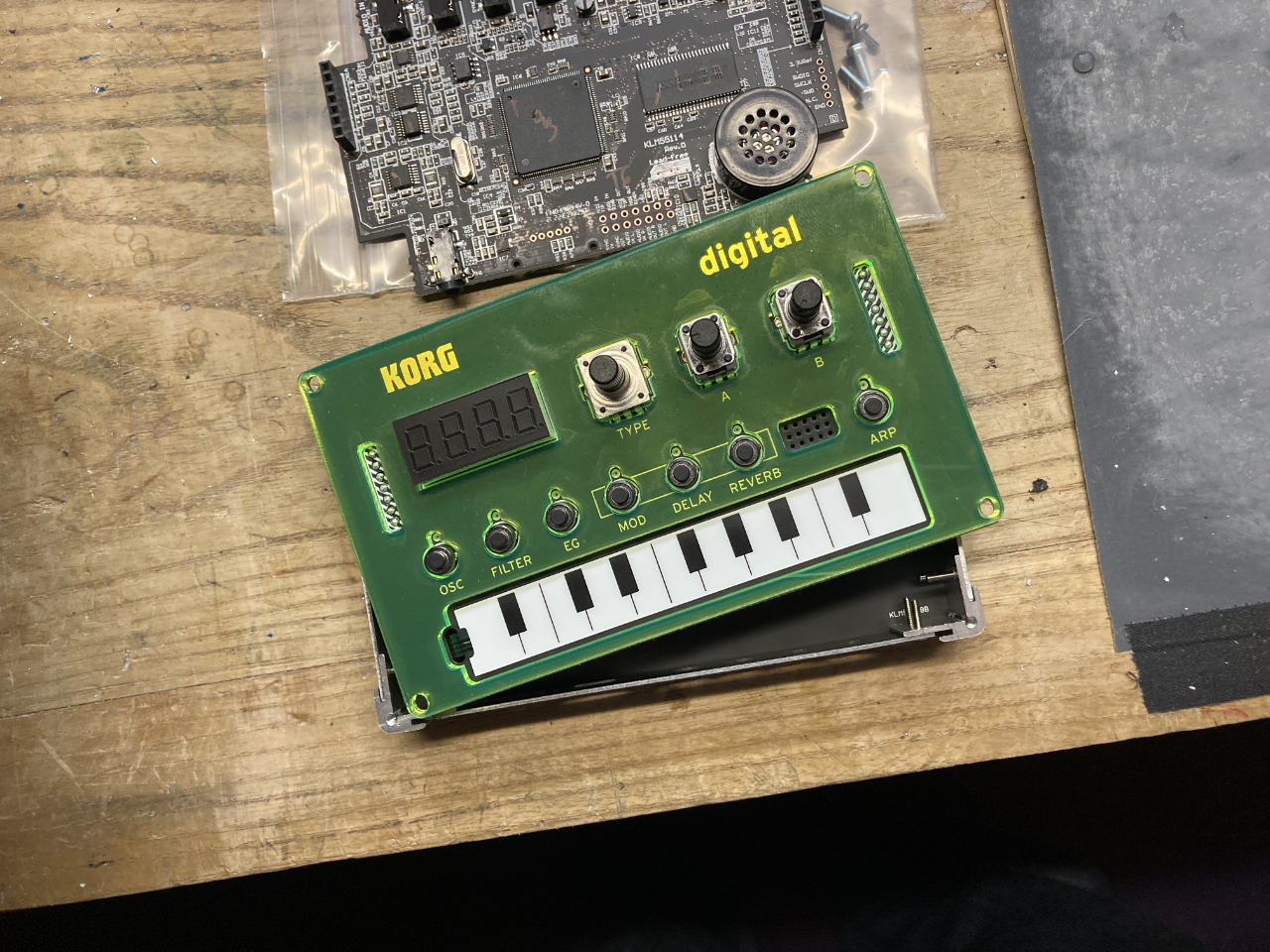 I also added a laser cut overlay panel to mine. (Mostly cosmetic, though it does keep the top surface a bit cleaner.) I did have to grab some longer screws to hold it in place. If I remember correctly they were 2.5mm machine screws about 8mm long. (The stock ones were a bit too short to catch enough of the threads due to the increase is height due to the overlay.) 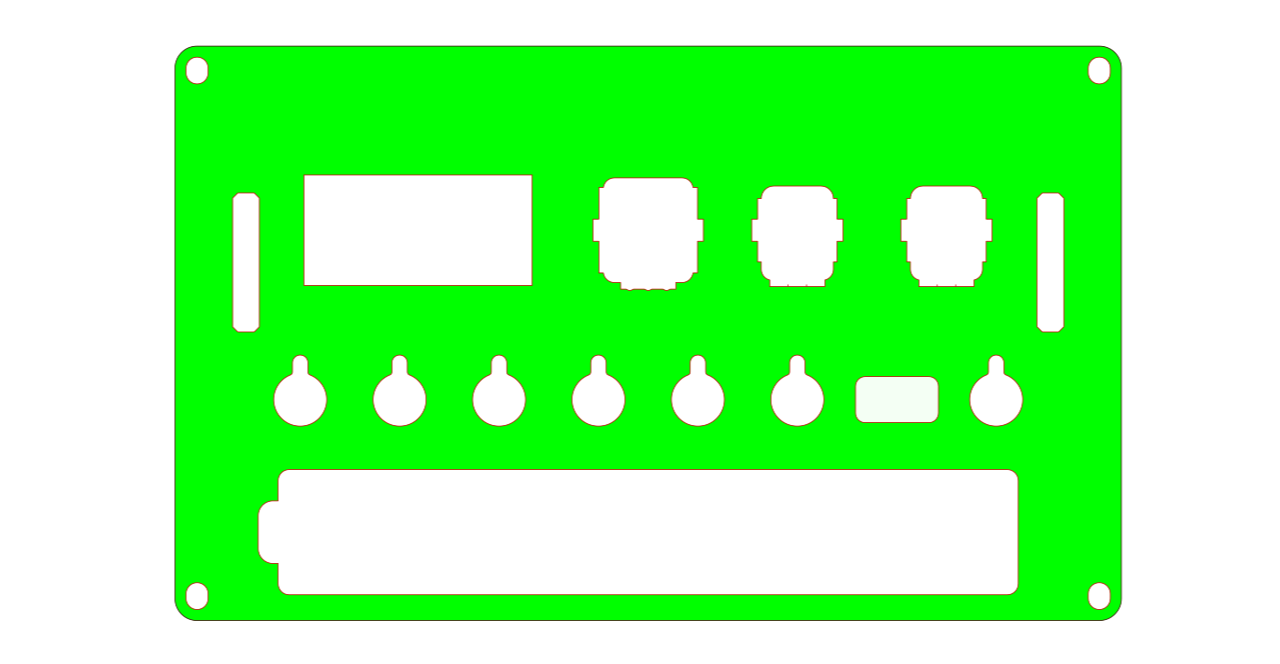 The file I used was just a slightly modified version of one that Korg provided. Since black and green are two of my favorite colors this looks great in my opinion.

Oh, one thing I forgot to do was put hot glue all over the Micro USB jack! I will need to open it up and add more glue to that.

Here’s a little sound demo of the Korg NTS-1 which has a built-in arpeggiator.