I tend to post most of my project updates to the blog, but I wanted a place where I could have a static list of some of the things I’ve worked on. This is that list. (Each project will also have a list of blog posts that relate to or mention it.) 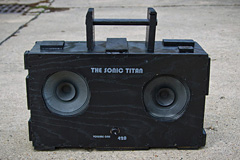 The Sonic Titan ushers in a new era where the “doom box” replaces the “boom box” as an offering to the reptile masters. 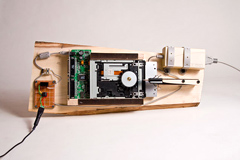 Click Whir Squee is a new kind of annoying machine that is part art, part ridiculous joke, and completely irresistible. 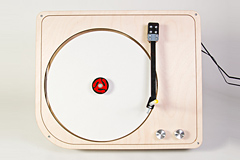 The Turndrawble is a drawing machine that functions as a turntable, but it creates drawings instead of sounds. 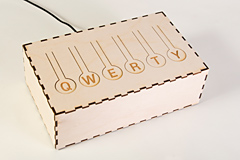 QWERTY Keyboard is a fully-functional (albeit limited) USB keyboard that works with any desktop or laptop computer. 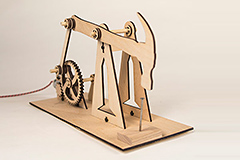 The Hammer of Futility

The Hammer of Futility is a kinetic sculpture created from laser-cut wood that consists of a hammer attempting to hit a nail, and failing, repeatedly. 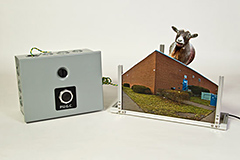 An extensible platform for the control of elements that should pop up behind other elements. Also, there is a goat (sometimes.) 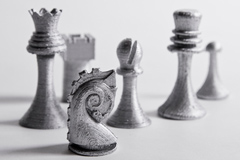 A recreation of Marcel Duchamp’s Chess Set through the process of 3D printing. (A collaboration with Bryan Cera and Scott Kildall.) 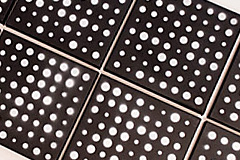 annular is a series of paintings that came about due to my work using Processing to generate grids of shapes with randomized values mixed in. 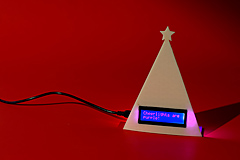 The CheerLCD is part of a global network of holiday lights that are controlled by Twitter and ThingSpeak. I used an Adafruit LCD Display, a 3D printed tree, and some Perl code to build it. 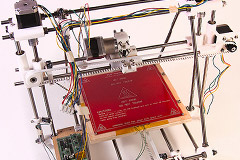 I built a MakerGear Prusa Mendel RepRap 3D Printer from nothing but a box full of parts, poorly written instructions, and the Internet. 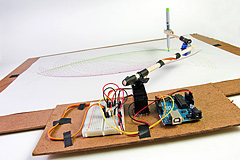 For Spring Gallery Night 2012 I built an Arduino-controlled arm that draws arcs. It consisting of two servo motors, wooden dowels, hot glue, gaff tape, and a C47 to hold a Sharpie marker. 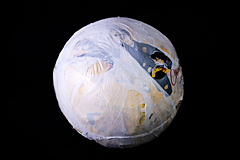 A piece I created for the “Tool at Hand” Challenge, which asked artists to create a work using just one tool. I chose a heat gun, and used plastic bags as the medium. 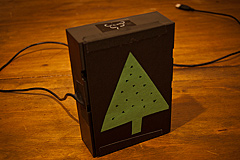 The CheerLight is part of a global network of holiday lights that are controlled by Twitter and ThingSpeak. I used an Arduino, a ShiftBrite, and a bunch of random bits and pieces I found around the house to assemble it. 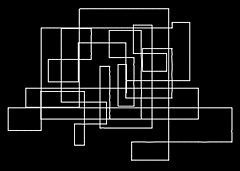 The Make A Sketch features an Arduino-based controller and a Processing application that work together to function like an old Etch A Sketch, letting you draw images using just two knobs. It’s a blend of old-school analog art with the modern digital world. 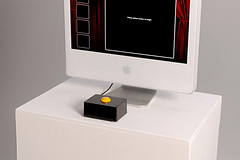 I wanted a good looking photo booth I could use for events, so with the custom-built USB button, cabinet, and an old iMac, The Photo Booth was ready to go. (And yes, it’s available for rental.) 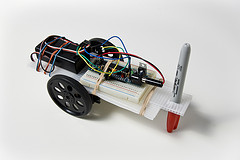 I love robots, and I love art, so one Friday night when I was home alone with my youngest daughter, it was easy to convince her that we should hang out in the basement and try to build a robot that draws things. I’ve also had the Drawbot do its thing in public, at the Milwaukee Makerspace Mini Maker Fair. 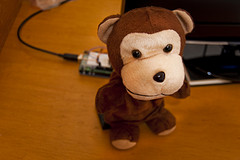 When I first got into using the Arduino microcontroller in 2010 I had an idea for a simple project involving a hand puppet and polling the Twitter stream. I debuted it at the November 2010 Web414 Meeting and it ended up getting mentioned on a number of high-profile sites. 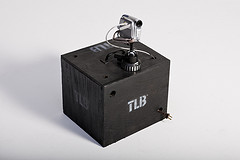 At the first BarCampMilwaukee in 2006, a group of people put together a time lapse webcam using an iMac I provided. After that, I was hooked. I’ve ended up creating “Time Lapse Bots” at many of the events I’ve been involved with, so I eventually built an all-in-one unit. 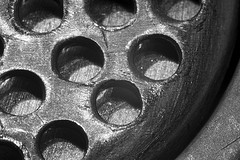 Guess The Photo started as a simple guessing game where I would post a black and white macro photo on Flickr and ask people to guess what it was. People enjoyed the guessing game, and I’ve seen a few “social media” agencies use a very similar idea. I ended up showing the photos at the Delafield Art Walk in May 2010.

A professional panoramic tripod head can easily costs hundreds of dollars. As I was learning about panoramic photography I decided to build my own panoramic head. I constructed it in just a few hours out of scrap material I had around the house. 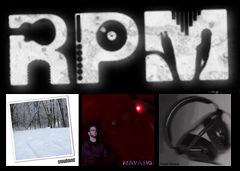 In 2008 I took part in the RPM Challenge, which involves recording an entire album in 28 days. I’ve done it three times now, and will probably do it again.