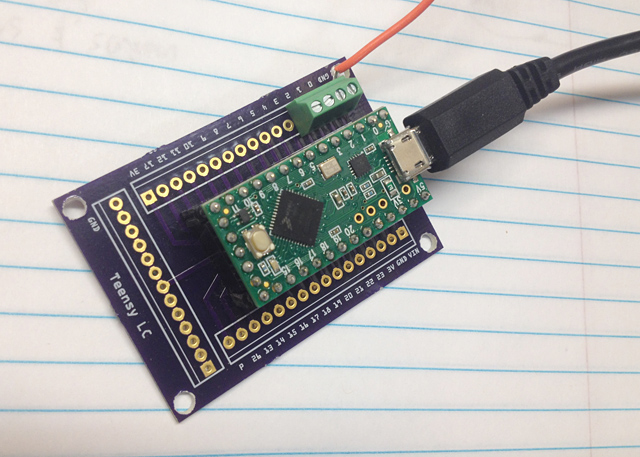 I recently created my first “real” printed circuit board. By “real” I mean one that I sent out to get fabricated, not one I did at home by etching it myself. The board is for a Teensy LC, and breaks out most of the pins to screw terminals. (Pictured above is version 1.0, which has been revised due to a few spacing issues and the mounting holes being too small. You can see I had to drill them a bit larger.) 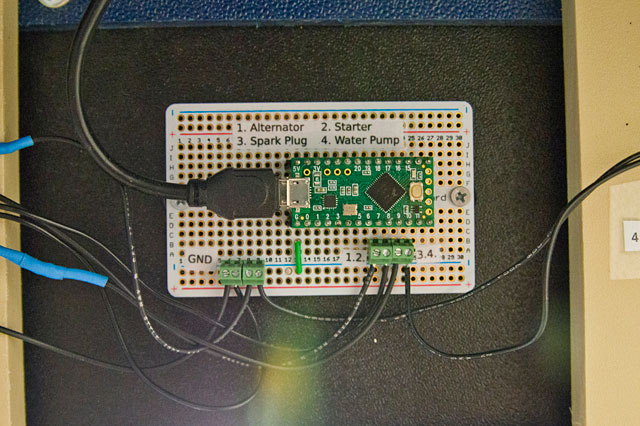 The Teensy LC BOB (BreakOut Board) came about due to my use of the Teensy for a few museum projects that were using the controller as an input device for a computer. I had been putting the boards onto Adafruit Perma-Proto Breadboards which are great to work with, but after building a few of these that were very similar to each other, I thought I could just design my own PCB to get the job done. (The board I designed probably cost about $2.15 more than the Adafruit boards, but it’s also designed to be exactly what I need.) 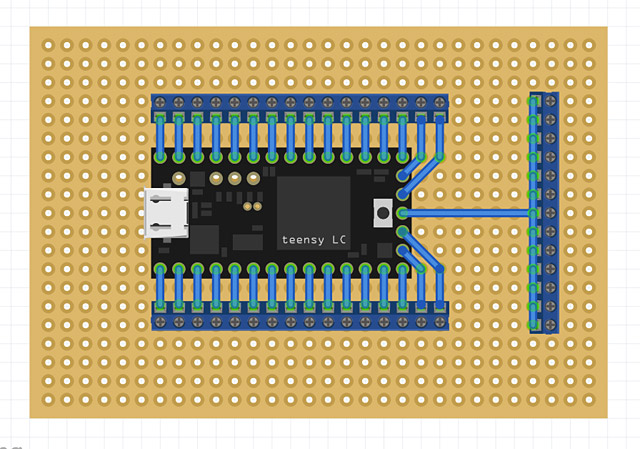 I started by designing what I needed in Fritzing using the breadboard view. I added in the screw terminals I wanted, and wired it all up. At this point spacing doesn’t matter too much, as it’s just to get all the components and connections in place. 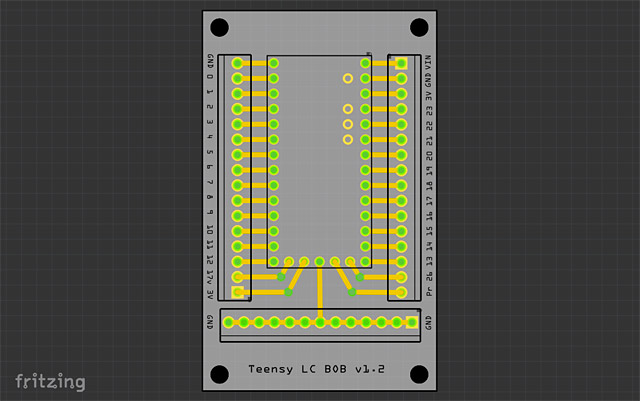 Once all the pieces are in place and connected up I switched to PCB view where you get to see what the actual printed circuit board will look like. Here the positioning and spacing is just like the real world. This step probably tool the most amount of time, and I found the tools a bit lacking compared to something like Inkscape or Illustrator for precise positioning. Part of this could be due to my still learning how it all works. There’s some good info here on designing PCBs in Fritzing. (Eventually I’d like to do custom shapes.) 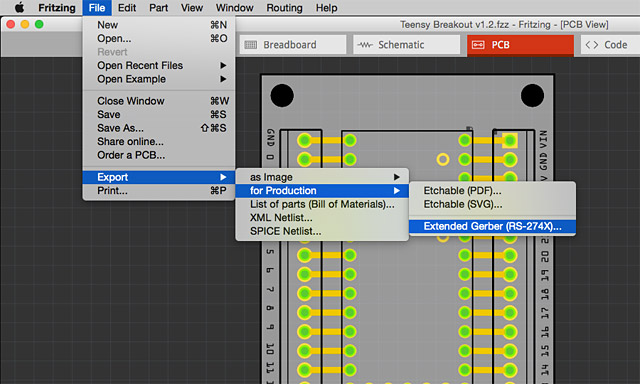 After I was happy with the PCB layout I exported it using Export > for Production > Extended Gerber (RS-274X) from the file menu.

It will output a whole bunch of files to the folder specified. Once I had this folder I made a ZIP file from it, and named it Teensy-BOB.zip and uploaded it to OSH Park. 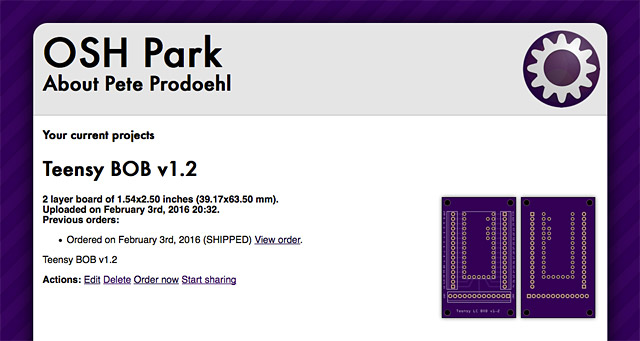 OSH Park’s web site will check your files and show you previews during the upload process. (Hopefully you can figure out what you’re looking at!) As I mentioned, the first version had a few issues, so I corrected those and put in a new order. For the new version I added the name of the board and the version number. Once I get these back and test them I’ll share the project so anyone can order some if needed. (At least one person at Milwaukee Makerspace was interested.)

I should note that the Teensy 3.x board could also be put on one of these, though the pin labeling is a little different. I’ll probably create another version that is specific to the Teensy 3.x for a future project I’m doing for Maker Faire Milwaukee this year.

Update: OSH Park has some docs on using Fritzing. 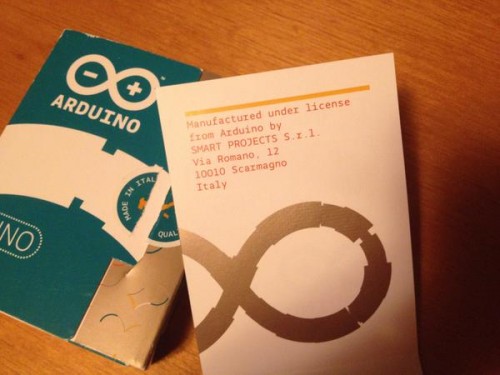 In accordance with a request from organizations and people I respect, here’s a photo take on 2015-04-19 showing the packaging from an Arduino UNO I purchased from Adafruit Industries (in the United States of America) on 2010-10-19 showing the text “Manufactured under license from Arduino by SMART PROJECTS S.r.l.”. 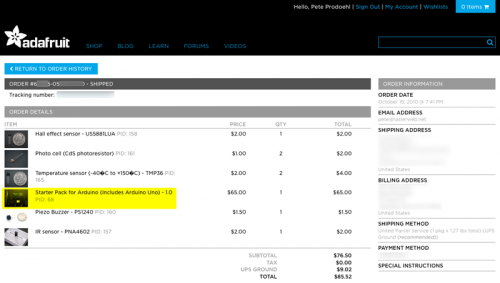 Here is the order information from that purchase. For more info, see the Hackaday post Your Arduino Packaging Could Sway a Court Case and the Adafruit post Please post old Arduino packaging that says “Manufactured under license from Arduino” #TeamArduinoCC. 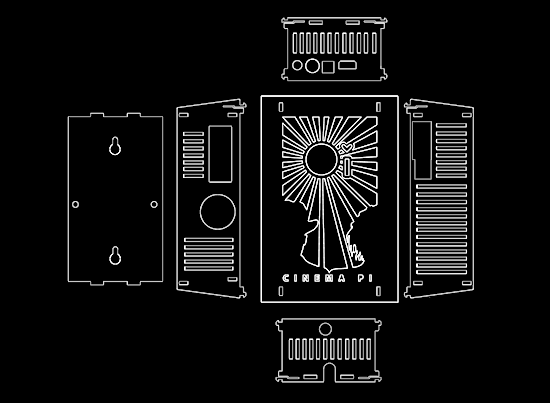 I was alerted to the fact that someone created a new design based on one of my designs. The Laser Cut Case CinemaPi is based on a design I created called Raspberry Pi Case (with Camera) which you might remember from this post. (Oh, if you want more info on the Cinema Pi, see the notes here.)

But wait! It doesn’t end there… 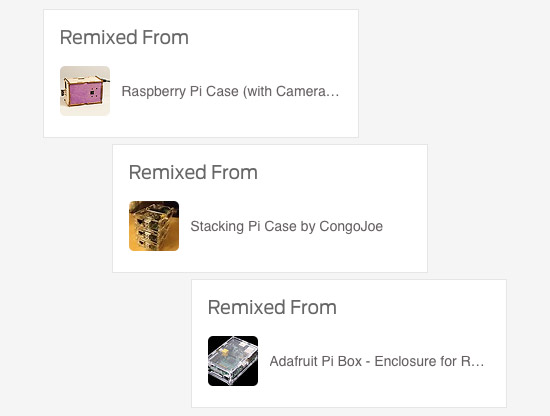 My case is actually derived from Stacking Pi Case by CongoJoe. And CongoJoe? Not even the original creator, as he based his work on a design from Adafruit called the Adafruit Pi Box.

And Adafruit? They created the case and it’s a product they still sell, and they’ll tell you how to put it together. (And yes, they do have a newer, cheaper version if you just want a Pi case.)

Adafruit is just plain awesome, of course. They know that it’s not just about selling products, but about sharing information, teaching, spreading knowledge, and inspiring people. They get it.

This… this is the kind of world I want to live in. 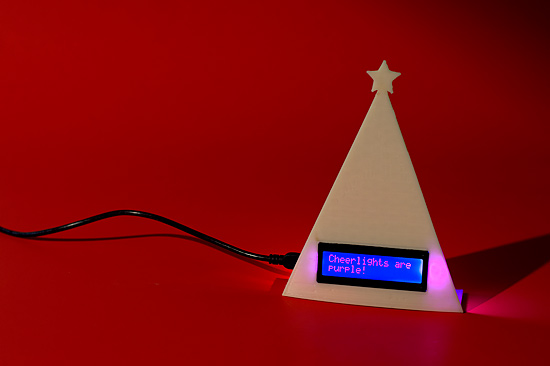 Here’s my CheerLight 2012 device, which I call the CheerLCD! And what is CheerLights you say?

CheerLights is an ioBridge Labs project that allows people’s lights all across the world to synchronize, stay linked based on social networking trends. It’s a way to connect physical things with social networking experiences and spread cheer at the same time.

Much like last year, I’ve opted for a small desktop display—a USB-powered computer peripheral—rather than some giant string of multicolored lights… 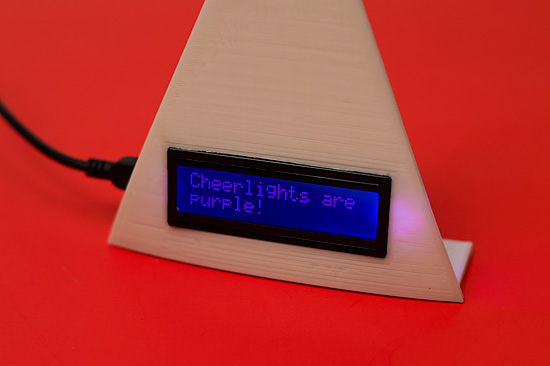 With the combined power of 3D printing, affordable electronics, and the duct tape of programming languages that is Perl, we’ve developed a device that informs you of what color the CheerLights around the globe are, not only with color, but with words!

(Though we’ve not yet done extensive testing, the text should be legible even by those suffering from color blindness. Accessibility, FTW!) 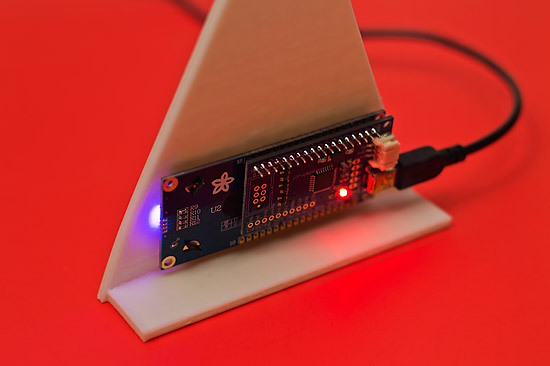 The CheerLCD consists of a USB + Serial Backpack Kit and LCD Display from our friends at Adafruit Industries. But you can’t just have a display without some sort of thingy to display the display properly… enter the 3D Printer! 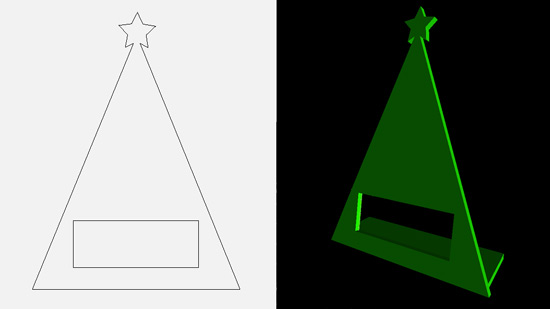 The CheerTree was designed specifically to hold the LCD Display. I utilized Inkscape for the design of the front plate, and then brought that shape into OpenSCAD to add the base and create an STL file for printing. (It ended up warping a bit but that just adds to the charm and aesthetic of the overall device.)

I know what you’re saying, “This is all well and good… but we need to see the CheerLCD in action!” As you wish, my friends… as you wish.

There’s some code over on github/CheerLCD, and some files on Thingiverse for the CheerTree. 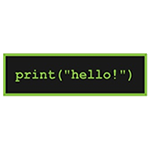 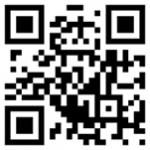 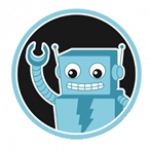 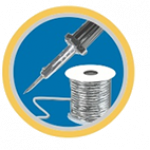 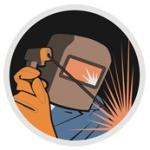