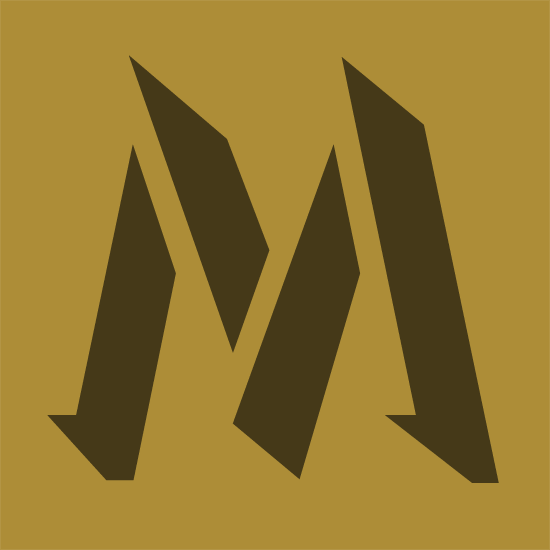 Our story of the M begins when my friend Tiffany from While You Were Out Pet Sitting Service mentioned she was doing a charity event called Red, White & Black: 100 Square Feet of Art. If you remember the old “250 Square Feet of Art” event the Eisner used to hold (and I took part in) it’s like that. Artists create 12″x12″ boards, and they get auctioned off. So I volunteered.

I started with this letter M, in the typeface Umbra BT. I liked the 3D quality of it, and since I also love using the laser cutter at Milwaukee Makerspace, I had a plan. 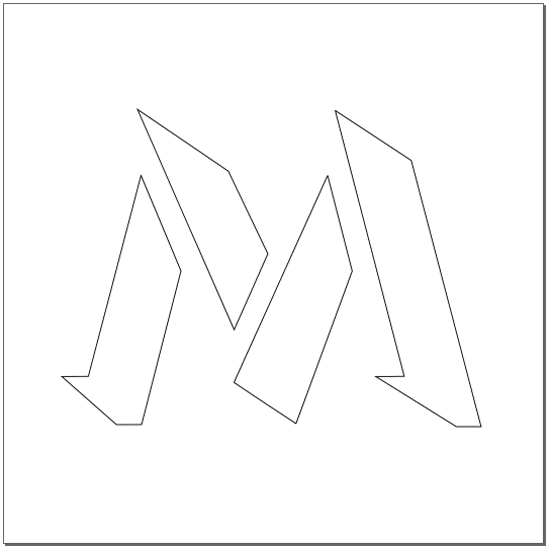 The Photoshop mock-up was just an idea, so I re-created the letter M in Inkscape to prepare it to be laser cut. You’ll notice right now that the M in the first image and second image don’t match exactly. (I wish I had noticed at the time!)

I cut the shapes out of 1/8″ Baltic Birch plywood. My plan was to cut one board like this, and I’d the use the pieces to attach to another board, and the template piece as an assembly guide. Good idea, right? Right. 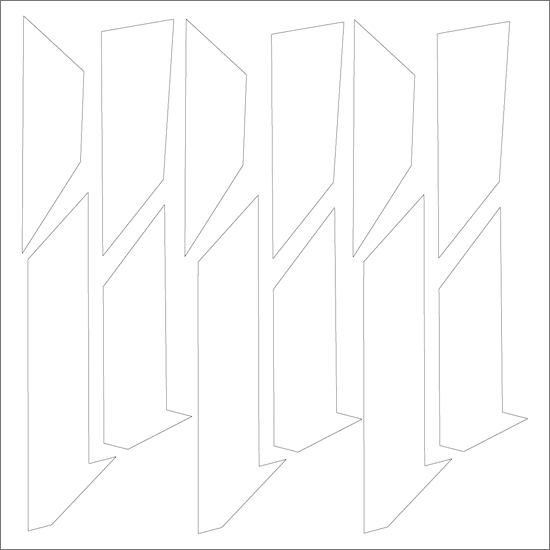 My next thought was, “Why waste full boards to get more pieces?” and I arranged the pieces to minimize waste. This works well for general assembly of things, but for art, maybe not so much. The pieces cut fine, but I did have to deal with kerfs, some scorching, the grain of the wood, etc. None of those things were huge deals, but they’re things to be aware of in the future. 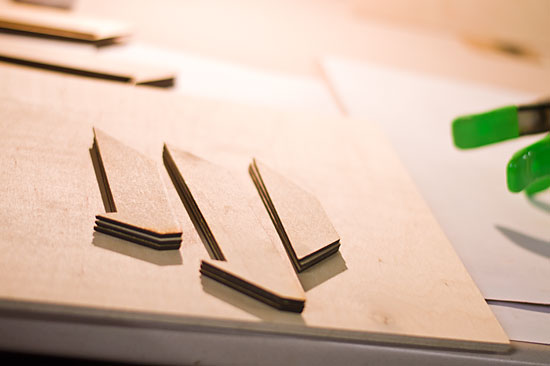 At this point it was just a matter of assembly. A bit of glue, and bit of wood stain, what could go wrong? 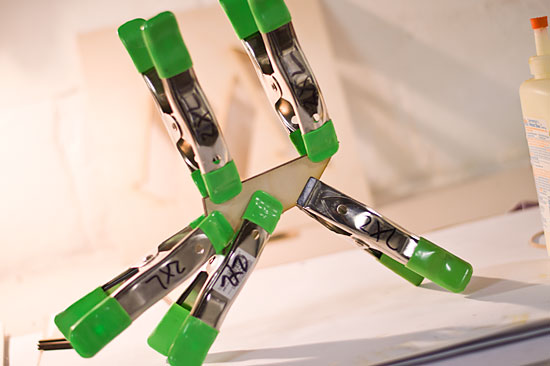 There was a lot of time spent with the glue and the clamps. Well, most of the time was spent waiting for glue to dry. I obviously need another 20 spring clamps. Just for fun, this is about the time I got sick and had a work overload, so I started getting really concerned about completing this on time. (It gets worse.) 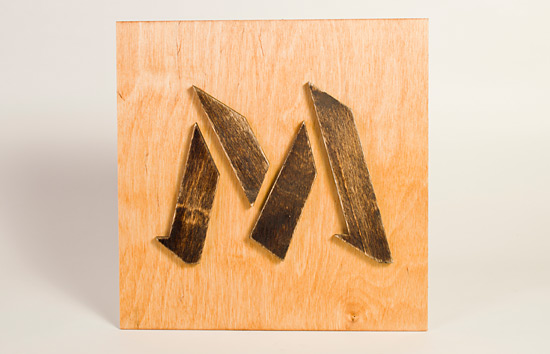 I also had a nightmare time with the wood stain, though I managed to recover that by changing the piece. I learned everything I’d forgotten about staining wood in the 20 years since I’ve last done it. 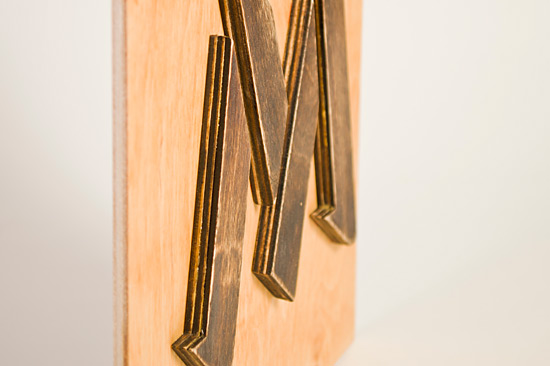 Here’s a side view of M1 showing the dimensionality of the piece. The M is about 3/8″ thick. 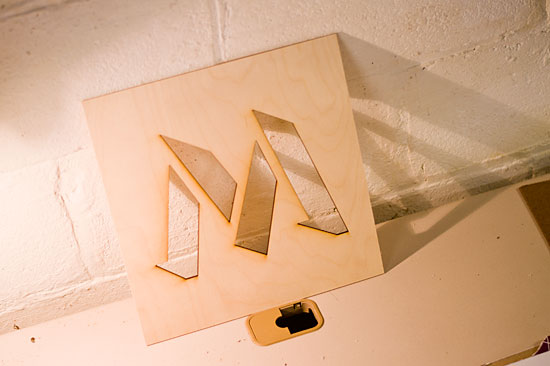 But wait, what’s that? I still have that leftover piece that I used as an assembly template! Hmmm… 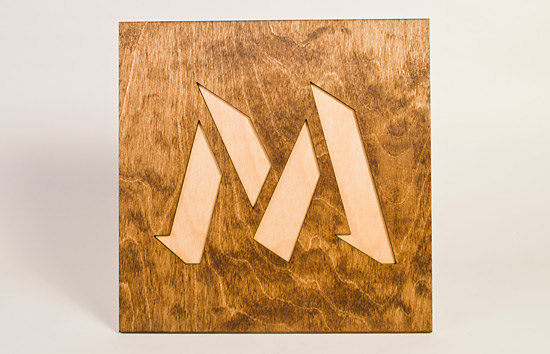 Yeah, here’s “M2” as it were. I figured that a perfectly nice piece of laser cut wood should not go to waste, so I came up with another idea. I reversed the color scheme of the stains on the two pieces of wood, attached the front piece to a back piece, and blammo! Another wonderful(?) piece of laser cut art. 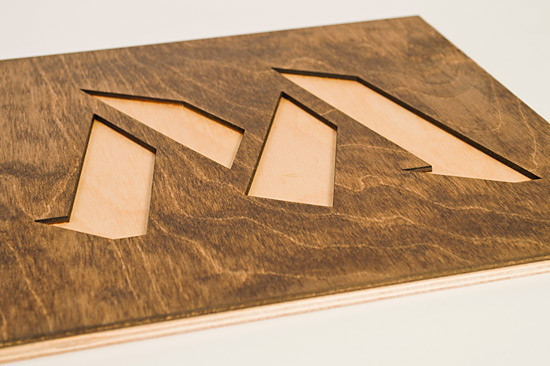 I think I may actually like M2 better than M1, maybe just because of the process that created it, but hey, you be the judge, or the critic, or the bidder, or whatever. Cheers!

This is a Music Video for the “This Time Tomorrow” project, which is helping raise money for The Leukemia & Lymphoma Society to help find a cure for blood cancers. I worked on building the set, preliminary lighting, and served as Assistant Camera and DIT. We shot it on our RED ONE at the Z2 studio in Pewaukee, Wisconsin.

Find out more about This Time Tomorrow at ThisTimeTomorrow.org

The idea behind Help Portrait is really simple… It’s about photographers using their photography skills to give back to the community.

On December 12th, 2009, photographers around the world will be grabbing their cameras, finding people in need, and taking their picture. When the prints are ready, the photographs get delivered. Yep. It really is that easy. And by the way, we don’t want to see your photos. This is about GIVING the pictures, not taking them. These portraits are not for your portfolio, website, or for sale. Money isn’t involved here. This holiday season, you have the chance to give a family something they may have never had before – a portrait together.

Last year I did some Photoshop work for a family friend which involved fixing a photo of the family, with their grandmother, shortly before she died. It wasn’t a very good picture, just your typical snapshot with a point and shoot camera, but making the photo better, and something they could look at in remembrance was big deal to them. When I think about that, I think about how nice it would be to have a really well done portrait of the family for them to hold on to…

I’m really happy to see that Milwaukee-area photographers are jumping on board with this… Check out helpportraitmke.com for more information, if you can help in any way, it would really be appreciated. (I believe they are looking for organizations and sponsors to donate consumables for this endeavor.)

Some of the Web414 members will be trekking up to Minneapolis to compete in the F1 Website Challenge, which is a (friendly?) competition between web-builders to create web sites for Minnesota non-profit organizations.

A few members of this team were responsible for kicking out ihatetreehouses.info in a matter of hours, in a late night session at BarCampMilwaukee2. Just imagine what they can do when they have an actual real-world project to focus on.

Sadly, I can’t take part, as I have to play soccer that weekend, but I look forward to seeing what they can do. And hey, it’s all for a good cause. In fact, I’ve already heard talk that a similar event for helping Wisconsin non-profit organizations may take place in Milwaukee in 2008. How’s that for cool?

I can’t help but guess that Web414 may end up using Drupal cuz most of us are fans of it. It’ll be interesting to see how they do against the other teams, who are listing things like .Net and Ruby as their platforms of choice.

My dear reader, it’s not often I ask you to do something, but I’m asking now…

Vinny, and old friend of mine (who taught me a lot about Linux, Perl, and Apache) is asking for help with something. See his Save Baby Gavin post for the full details, but the short version is that a relative of Vinny’s has a baby (Gavin) with end-stage renal failure. Which basically means that without a kidney transplant, Gavin will not survive.

So please check out the Save Baby Gavin site and help out if you can. Thanks…