I’ve printed a coat hook before, but this time I’m doing it for school. This is the DCRL Coat Hook for the class “Digital Craft: Machines that Make” in the Digital Fabrication + Design area at UWM, taught by Frankie Flood.

The assignment was to create a 3D model of a coat hook using Rhino, and then print it. I’ve been using OpenSCAD for years, and before that I used Sketchup, so Rhino is still fairly new to me. I used it a bit last semester, but mostly just to explore it and for 2D laser cutting. 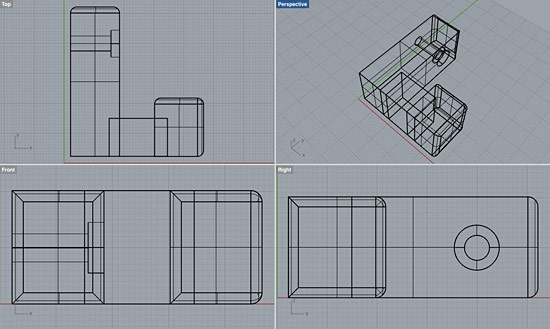 My first attempt was mainly about getting comfortable in Rhino. I’m so used to the way I work in OpenSCAD, and even the way I work in Inkscape, that I found Rhino a little lacking in certain things. I’ve gotten more used to it since I started, but I still see room for improvements to how it works. Version 1 was all about unions and differences and fillets. It worked, but I wasn’t entirely happy with how rectilinear the form was. 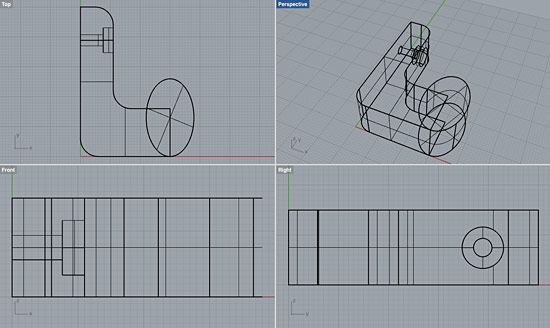 Version 2 was a bit more curvy, and while I was starting to like it more, the non-symmetrical parts bothered me. I did print out version 1 and 2 for our first class discussion, and I noticed that many students went out there with their designs, while mine tend to be very functional and utilitarian. I also have a good grasp of what is possible (and not possible) using hobby-level FDM/FFF. I don’t know if this helped or hindered my design, as I tend to think about the process I’m using at the time. (Sometimes, but I’ll get into that later.) 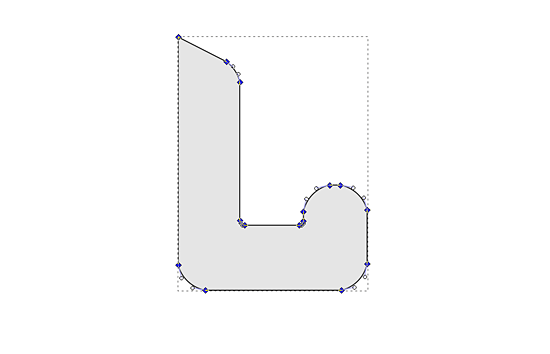 Eventually I ended up drawing version 3 in Inkscape, as I knew what I wanted it to look like, and it was an easy path to get exactly what I wanted, design-wise. I exported the file as a PDF, which imports nicely into Rhino, to get my 3D object. I also tend to look at replicating and/or extending existing workflows I already have. 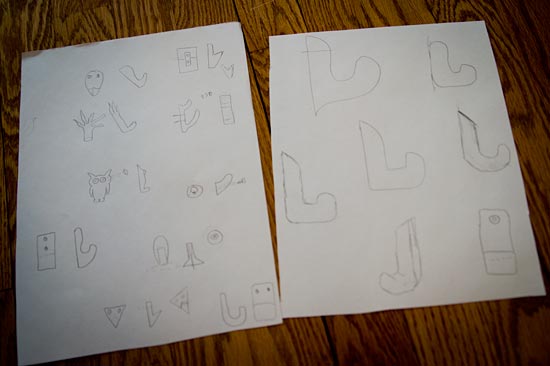 I typically find the desired size of objects by drawing them on paper. Here’s some of my early sketches (on the left) and the later ones (on the right) that I did before modeling in software. 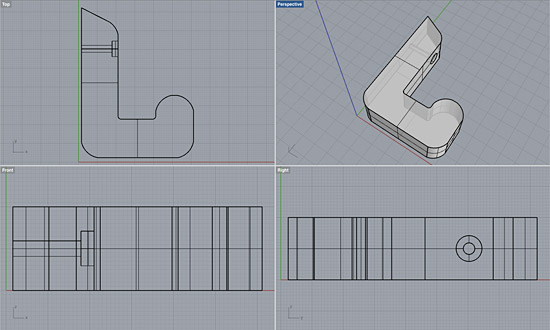 Once I had my vector PDF imported into Rhino I was able to extrude it to the desired height. Rhino lets you type in the height numerically while creating the object, but not after you’ve created it. It’s a bit frustrating, but I’ll get used to it. I then added the screw hole and a counter-sink hole. (I later realized I didn’t properly angle the counter-sink hole, which would have been easy to do. Perhaps for the next revision!)

I also thought about how this design could be used in other digital fabrication techniques. For instance, since the form is essentially an extruded 2D form, it would be easy to create a version using a CNC router or mill. After the profile is cut you could rotate it 90 degrees to get the screw hole, or just use a drill press. You could also cut a piece of pink foam, using a CNC machine, or by hand using a hot wire cutter, or any cutting tools, and cast it in metal (again a simple drilling operation would be needed to add the screw hole.)

If you’d like your own copy of this coat hook, you can grab it from Thingiverse or download from Youmagine.

Here’s a few photos of the final printed piece. There’s a few more photos in the DCRL album on Flickr as well. 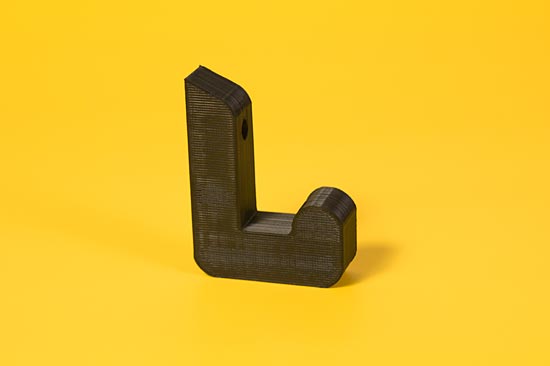 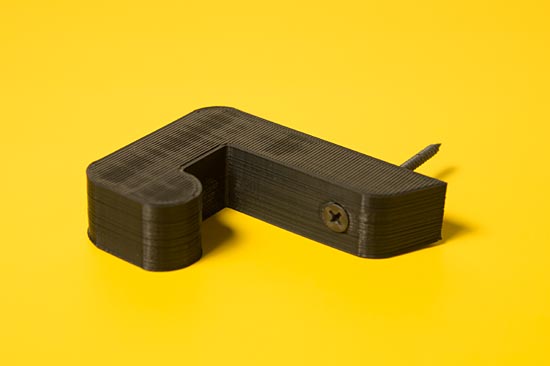 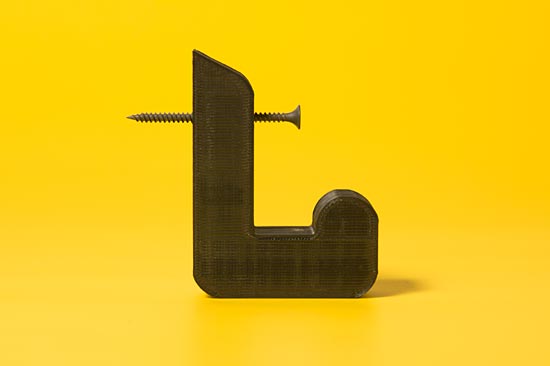 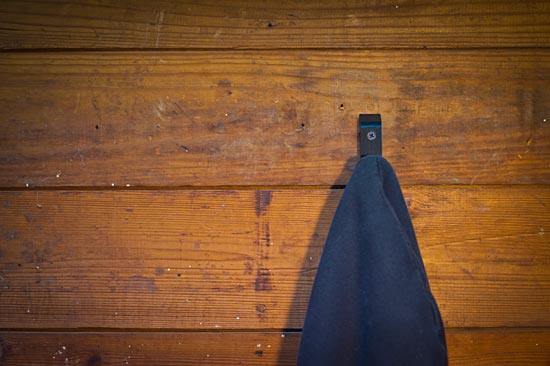 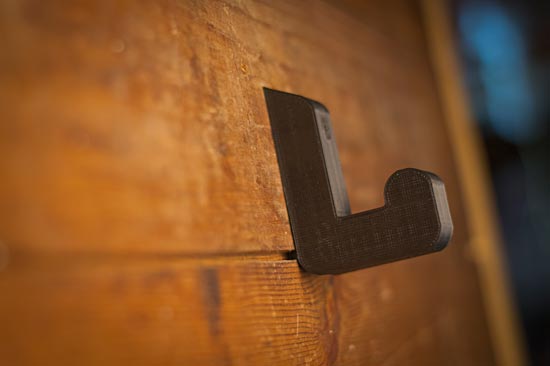 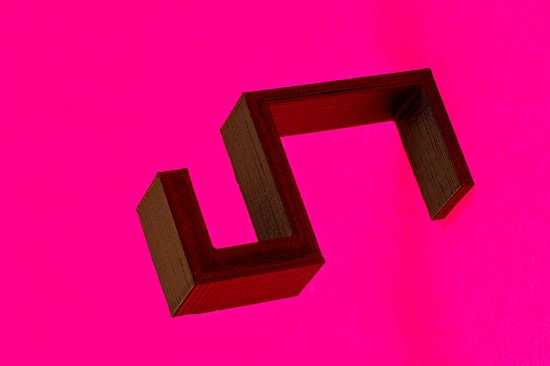 I recently (temporarily) changed offices at work, and with the new office came a new door, and this door has no coat hook! Because I couldn’t drill a hole in the door or mar the surface in any way, I needed an “over the door” style coat hook. Ah yes, the classic coat hook. Adrian Bowyer made one back in 2008, so I decided it was time to make my own. 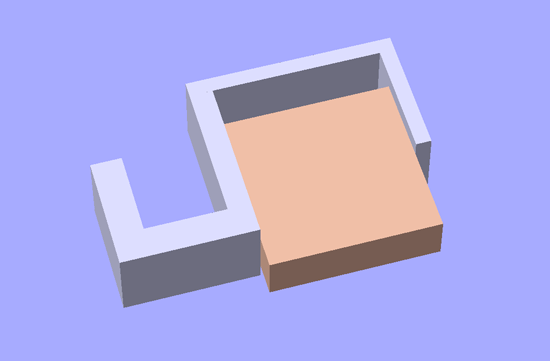 I took a quick measurement of the door to determine how wide it was. I then fired up OpenSCAD and made a bunch of “cubes” of various shapes and sizes, some rotated 90 degrees, but all in all, a pretty simple OpenSCAD model. One thing I did do was add in the “door” based on the measurement I took, so I could see how the coat hook would fit around it. 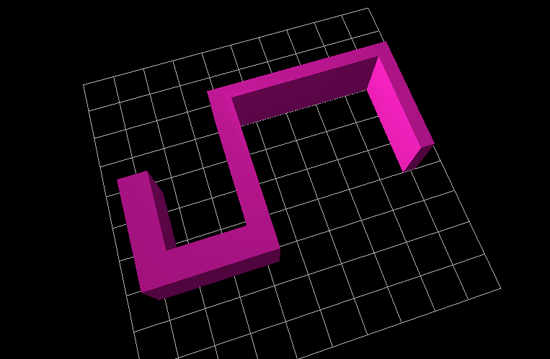 After compiling it in OpenSCAD, I exported the STL file, and at this point I usually use Gary Hodgson’s STL Viewer to take a quick look at the file and make sure it’s oriented correctly. 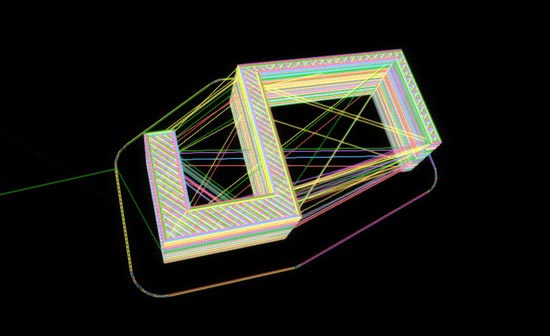 After viewing the STL file, I use Slic3r to generate the G-code, but hey, let’s check out the G-code while we’re at it! Joe Walnes wrote a great web-based G-code viewer you can use online, or download and run locally. If you want a somewhat improved version, Jeremy Herrman’s got a viewer and some code for you. 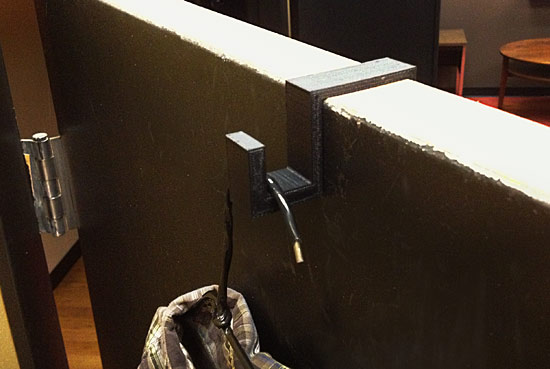 Well, after all that generating files, and viewing files, I printed the file. It worked out well! Here’s a terrible photo of it preventing my shirt from falling on the floor. Success! The magic of a home 3D printer pays off again.