It’s a known problem that I take on too many projects, and that tends to make some of them drag out longer than they should… has it really been more than a month since I started this one?

Yes it has. In my UI Mockup/Diagram Apps post, I was working on a control panel for the CNC Router we have at the Milwaukee Makerspace. 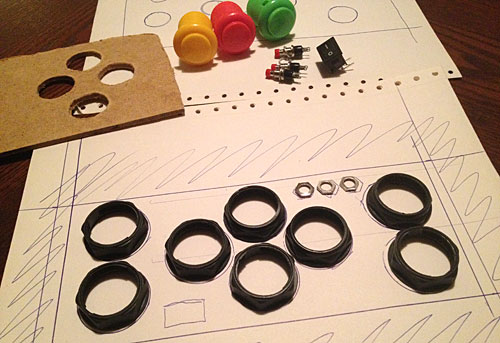 The image above was my first attempt to hack something together. I wanted to do a layout with paper to get a good idea of the physical size of things. As you may notice, the buttons are big, and make the whole thing fairly large. Larger than I wanted. So through a few posts I connected with a fellow maker in Madison who offered me some smaller buttons… 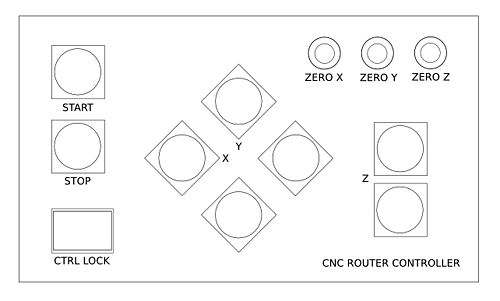 Once I had the smaller buttons, I sat down with some paper and the calipers, and started measuring things, and making the new layout. These were, like the previous attempt, just some rough sketches on paper. Once my paper sketches were done, I moved on to Inkscape, and made the digital version of my control panel. 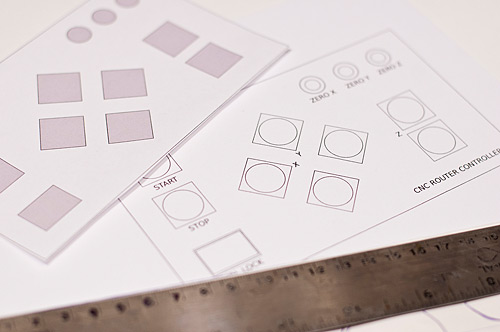 I then went back to paper, by printing out my files, to get a feel for the size and spacing of everything. I didn’t go as far as mocking up an actual 3D model, though it would have been easy with some foamcore or matte board, but it’s one more step to take if needed. 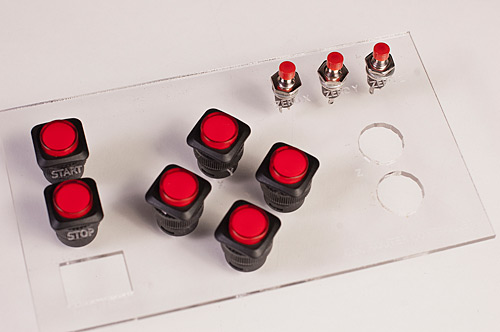 And as long as I was at the makerspace for some laser-related shenanigans, I figured I’d cut a test of the control panel using acrylic. (I’d like the final done in wood, but I had some scrap clear acrylic on hand, and it’s easier/faster to cut than wood.)

As is often the case, I screwed up one bit of the file, and the lower-left cut is too large. The two holes on the right are waiting for buttons I don’t have yet. Right, make that: buttons I didn’t have yet. More buttons showed up, but they are slightly smaller, so I’ll meed to re-size things again before the next cut. Back to the old drawing application, as they say.

And hey, I better finish this project soon, because there’s talk of adding a 4th and 5th axis to the router! I don’t really mind though, because so far I’ve really enjoyed the process, and I’ve learned a lot along the way, so even if this thing is outdated by the time I finish it, I’ll just start on an upgrade. :)

It’s great to see posts like this one from Hugh MacLeod: “Reclaim Blogging”: Why I’m giving up Twitter and Facebook, mainly because he highlights a few key points that freedom loving people everywhere should identify with:

The content on your blog, however, belongs to you, and you alone. People come to your online home, to hear what you have to say, not to hear what everybody else has to say. This sense of personal sovereignty is important.

I’m fine with people using Twitter, Facebook, Google+, Flickr, etc… I use them all too, but much of what I do on those services involves driving people here to my blog. And it’s not about eyeballs and revenue as much as it’s about sovereignty, longevity, freedom, and identity. Since starting in 1997, things like Friendster, and Vox, and even Myspace, have risen and fallen. I didn’t get locked into any of them. I didn’t choose LiveJournal, or Pitas, or any of the other hosted services out there, but chose to have my own domain, and put my stake in the ground here. And today I can still link to a post I wrote 14 years ago, and it’s there. It hasn’t disappeared due to some third party shutting down a service, or a startup running out of funding. It’s there because I kept it there, and I kept it safe.

I think now is a good time to remind people why we all got into blogging in the first place, all those years ago. I think now is a great time to “reclaim” blogging, so that is exactly what I’m doing. Here and now. Rock on.

And why did I get into blogging? I started in the personal publishing world in the mid-1980s when zines printed on paper was the best you could do… Once the web came along, I saw the potential, and jumped on it. The Internet is a world-wide publishing platform where the distribution costs are close enough to zero to make it available to anyone. Think about it. Think about it in terms of publishing in the 19th or early 20th century…That’s pretty damn powerful.

So remember kids, if you’ve got a blog, keep it up… if you abandoned it, reclaim it… and if you don’t have one, start one now. 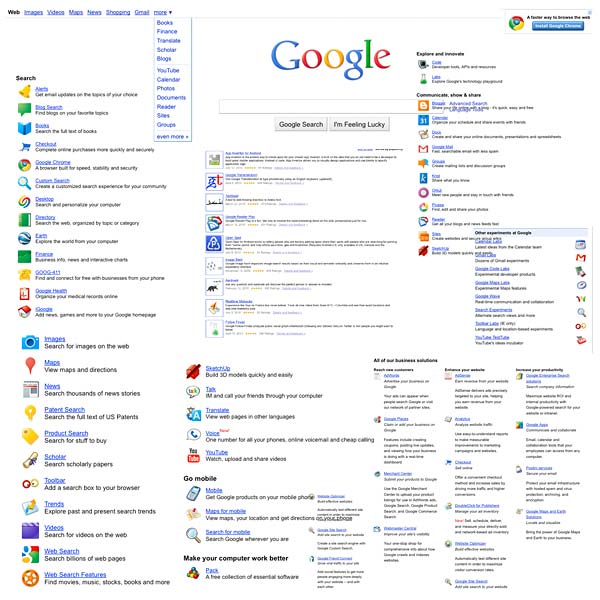 To suggest that Google is busy would be an understatement.

You might even suggest that if they have their fingers in a lot of different things, that they are some multi-armed, thousand-fingered monster, trying to take over and control the entire web…

But I’m sure that’s not the case…