A new request came in for the 8K Controller along the lines of “I’m using Blender on Ubuntu and would like these eight key commands programmed to make life easier.” So yeah, that’s what we’ve got.

While the 8K Controller (and all the USB devices we create) should work fine on macOS, Windows, Linux (and even Android and iOS) I still wanted to do the testing on Ubuntu. Luckily I’ve still got a Linux laptop lying around, even if it’s not running the latest version. (It worked great!)

There was also a request for specific colors, which we were able to do. (Note: I’m debating if I should add button color choice to the ordering process or make it a “get in touch” sort of thing. This is the first order that has specifically asked for certain colors.) 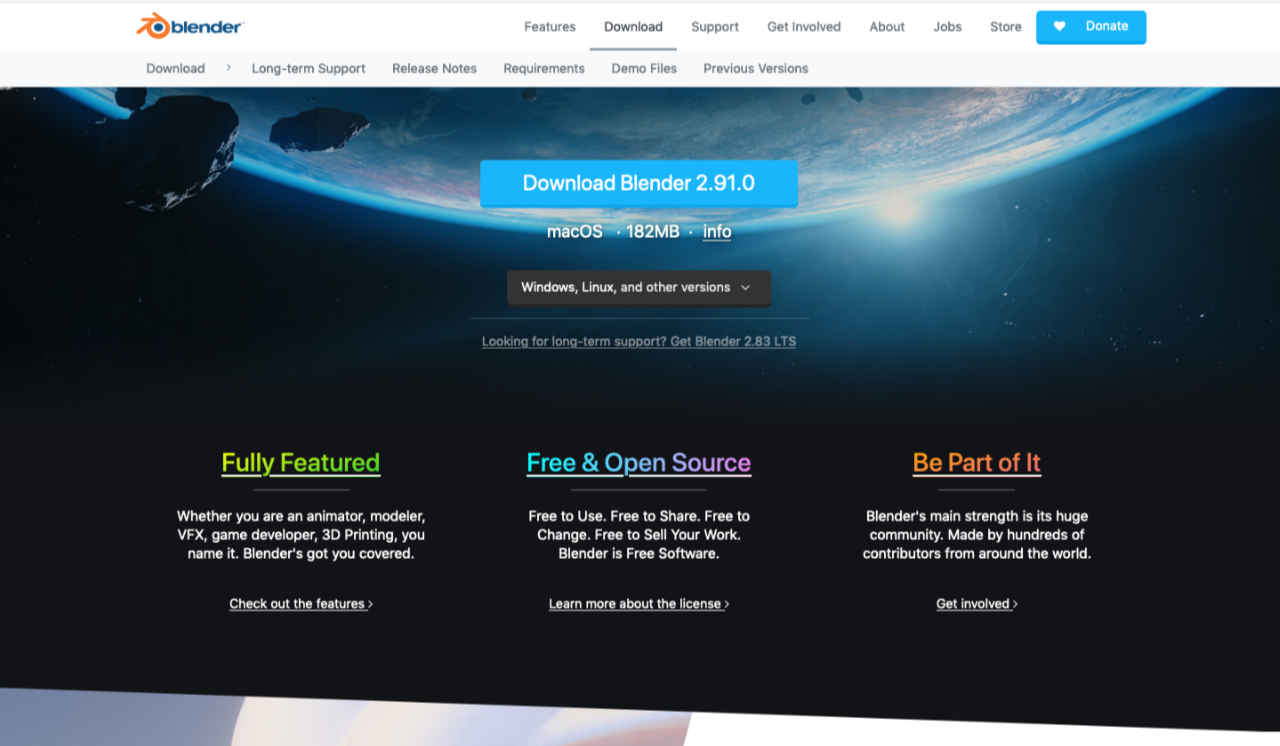 As for Blender, it’s been years since I tried to use it, though people have told me it’s gotten a lot easier to use. I know a few die-hard users who just love it.

Reminder: The 8K Controller is a USB controller. By default, it’s programmed for function keys F13 through F20 (which are not found on most keyboard) but can be customized for any key or key combo. You can get one at the 2XL Networks Shop. 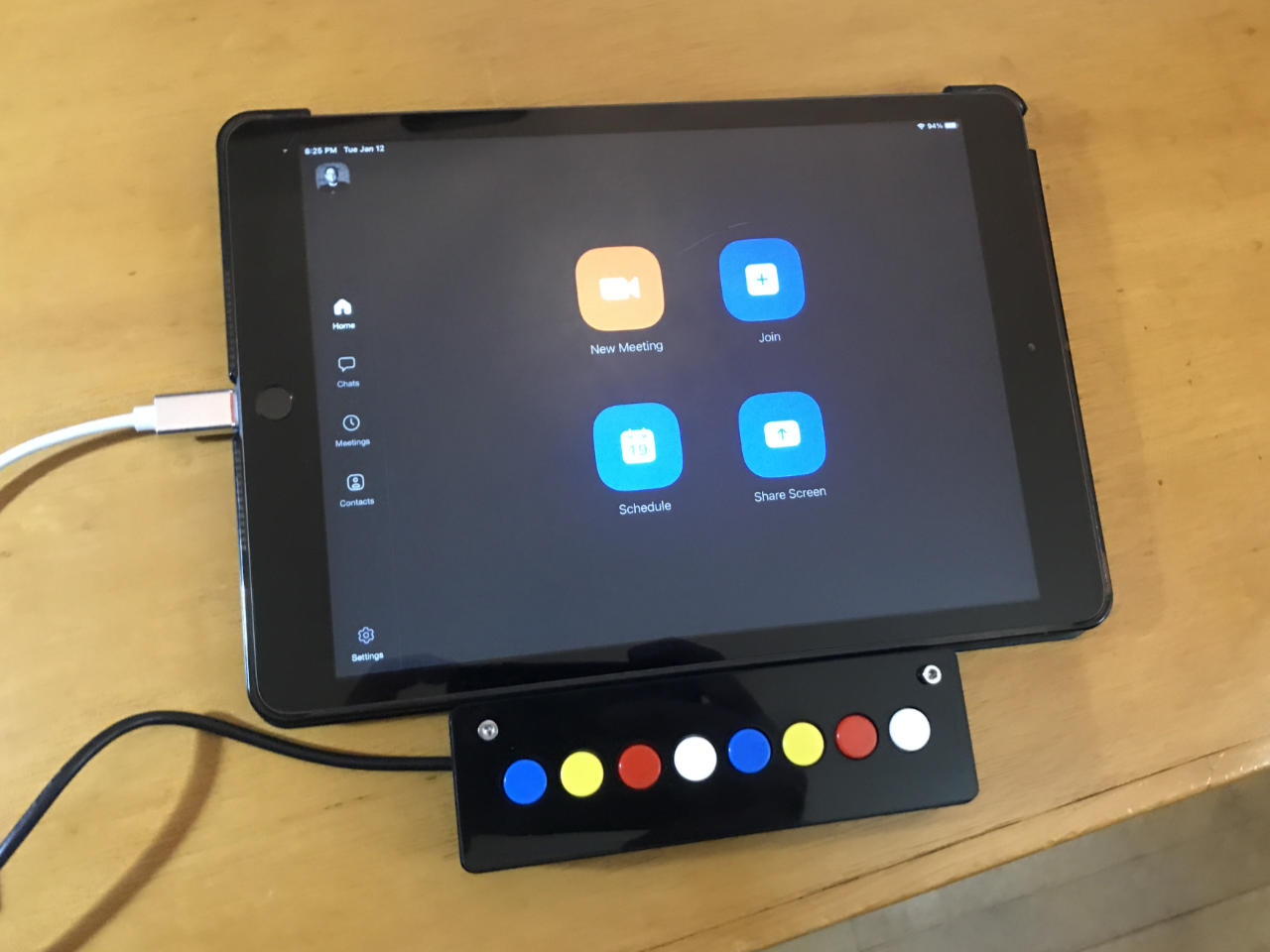 While it’s possible to use a Bluetooth keyboard with an iPad, you can also use a USB keyboard (or keypad) with an iPad. Some quick tests revealed that the 8K Controller worked just fine. In fact, we programmed it for the following Zoom controls: 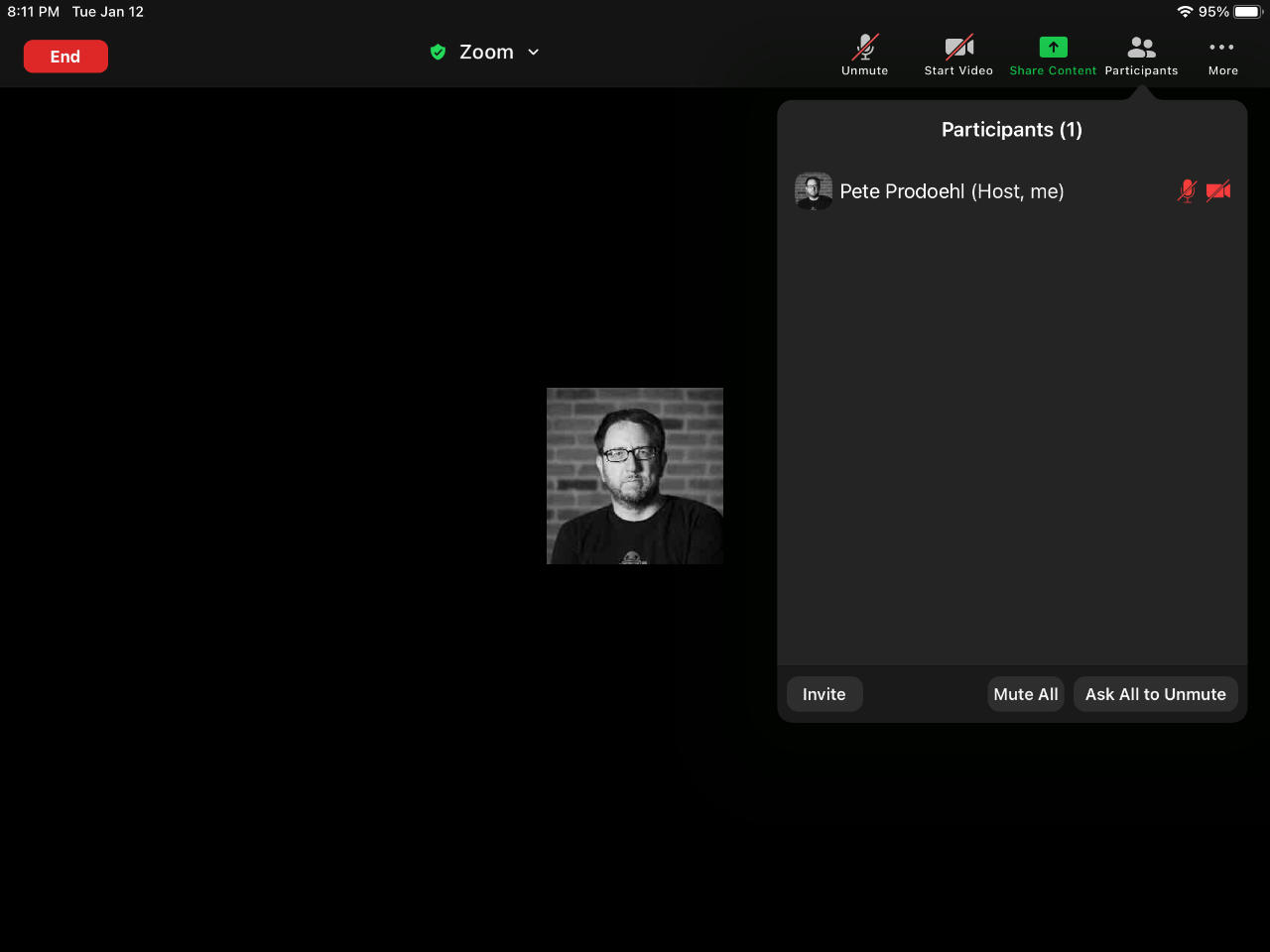 While “Minimize meeting” only minimizes and does not maximize, all the other controls are toggles. Press a button to mute yourself, press it again to unmute yourself, etc.

The command to “Close the front window” (which works fine on the macOS desktop application) did not work on iOS. (This may be due to being the host of the meeting… more testing is needed.) Everything else worked great!

So how do you connect a USB device to an iPad? It doesn’t exactly have USB ports… While Apple’s Lightning to USB Camera Adapter and USB-C Digital AV Multiport Adapter should fit the bill, I used a cheaper option, an OTG USB Adapter that was less than $11 USD. 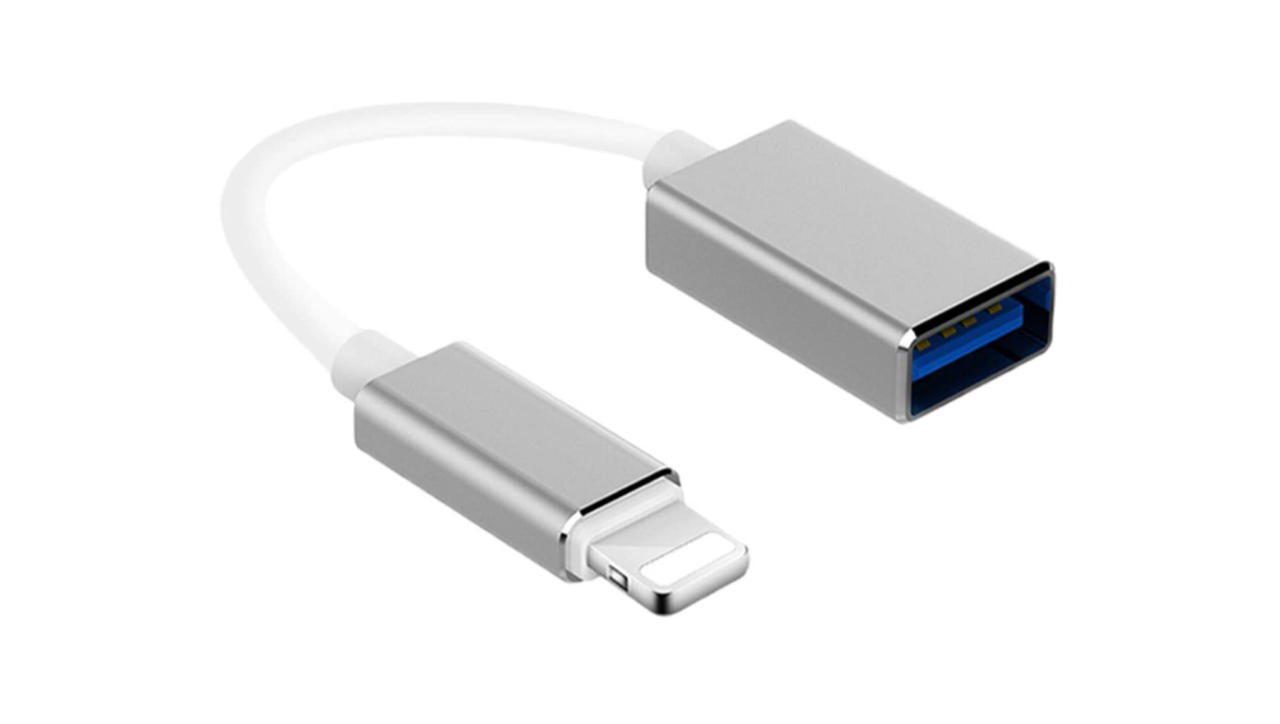 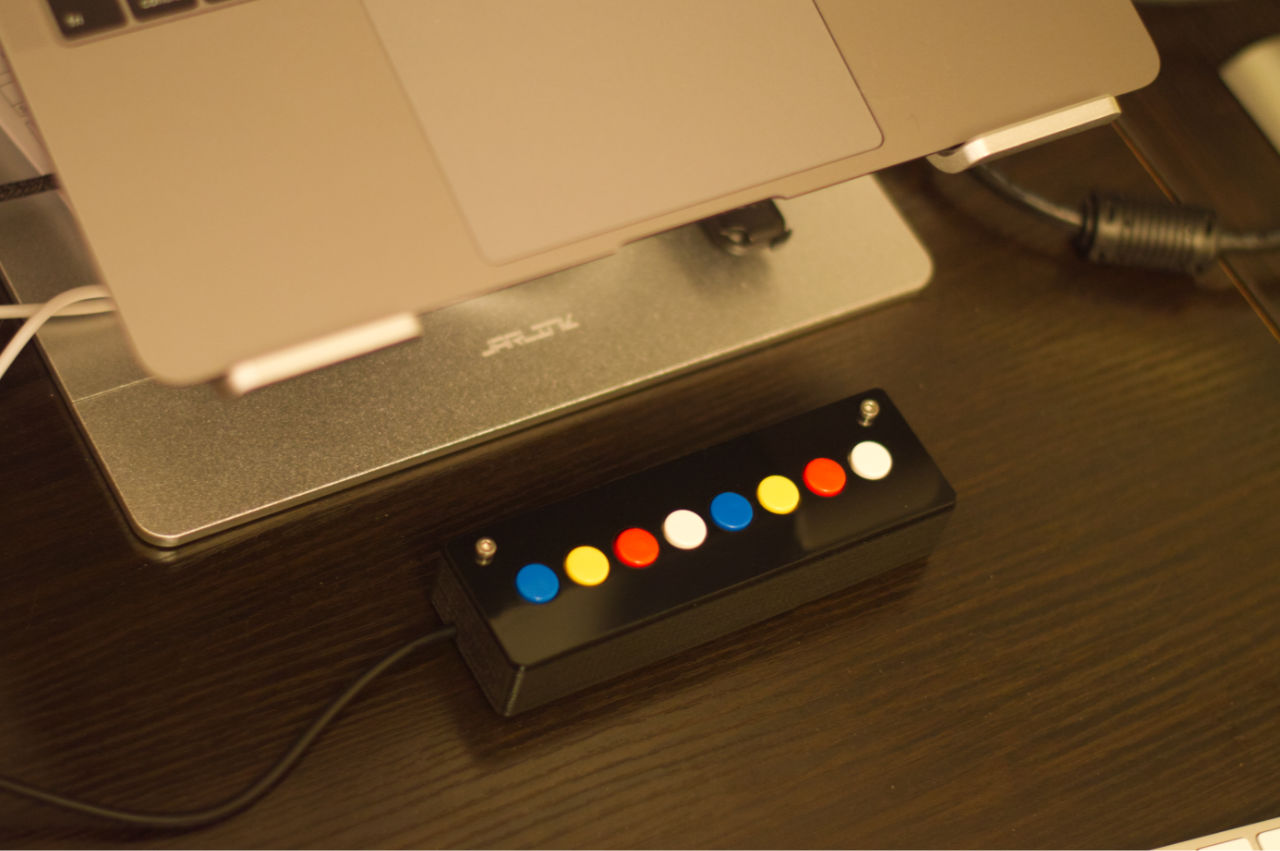 Note: While the following screenshots were taken using macOS, this all works fine on Windows as well. (And once we install Zoom on Linux we’ll test it there.) 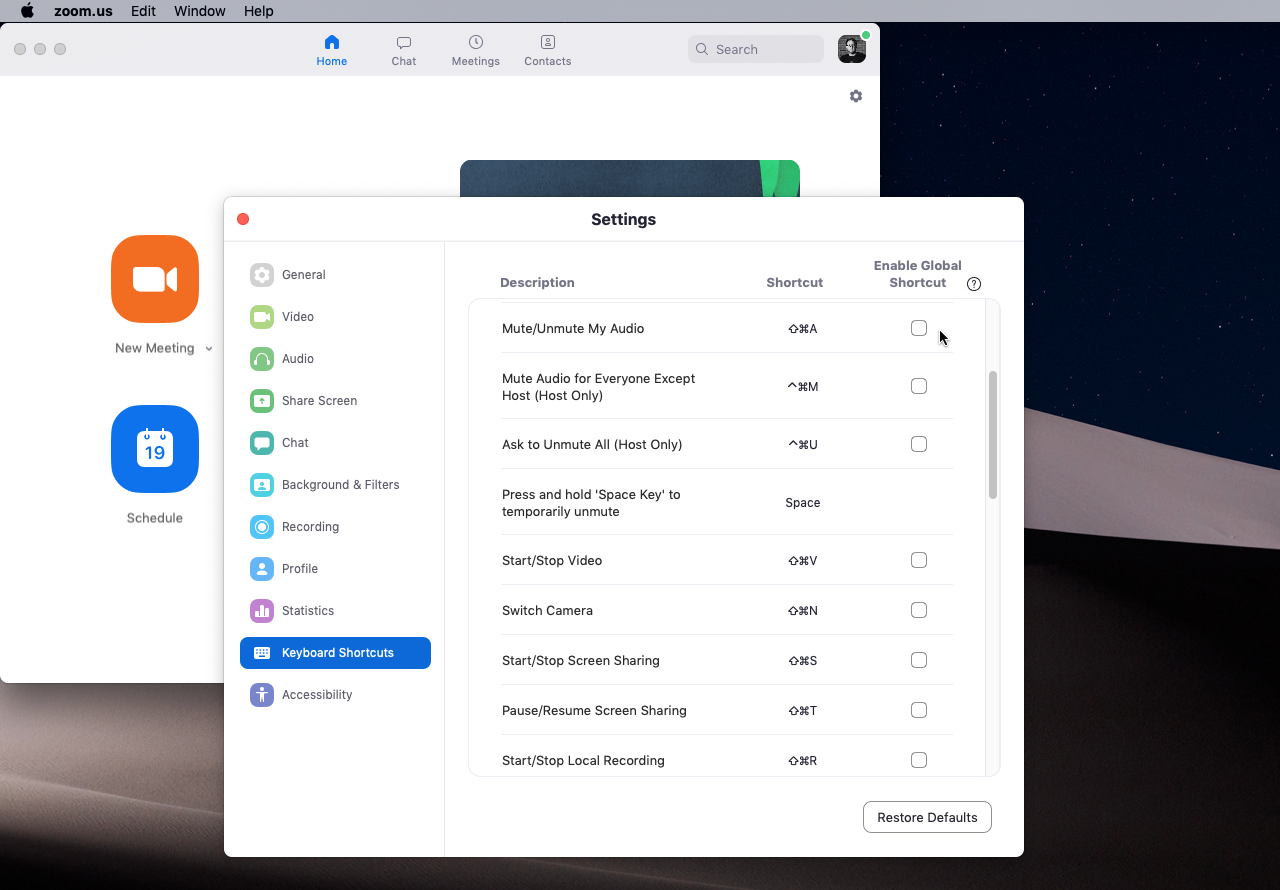 In the Zoom Settings you’ll see Keyboard Shortcuts. It lists the actions that can be controlled by key commands. One of the most popular things people want to do is mute and unmute themselves. You can do this with the key combo Command-Shift-A on macOS, or Alt-A on Windows and Linux. 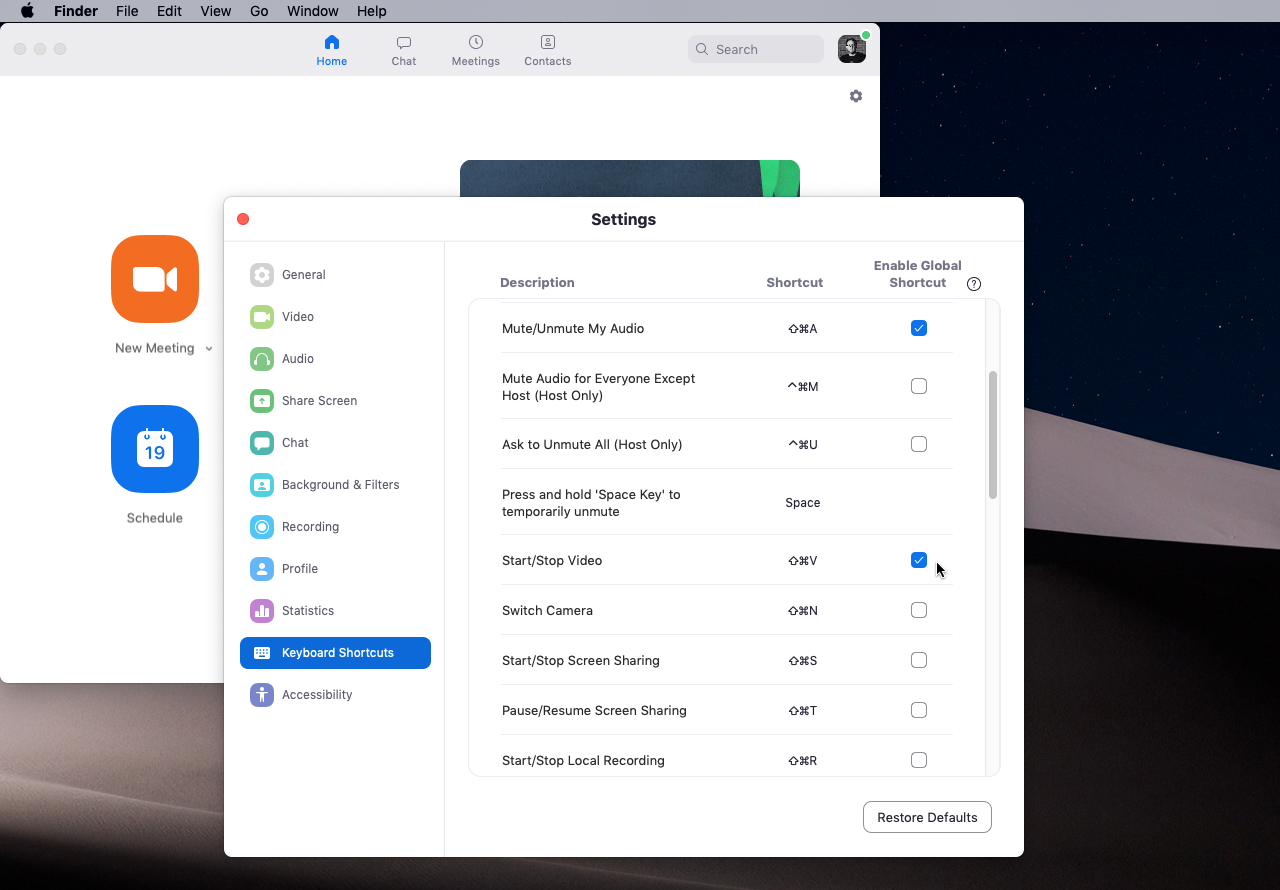 You can even set some of these key commands to be Global Shortcuts, which means they’ll work even when Zoom isn’t the frontmost application. This is handy if you’ve got a browser or some other application in focus. It’s up to you which shortcuts you want to be global. 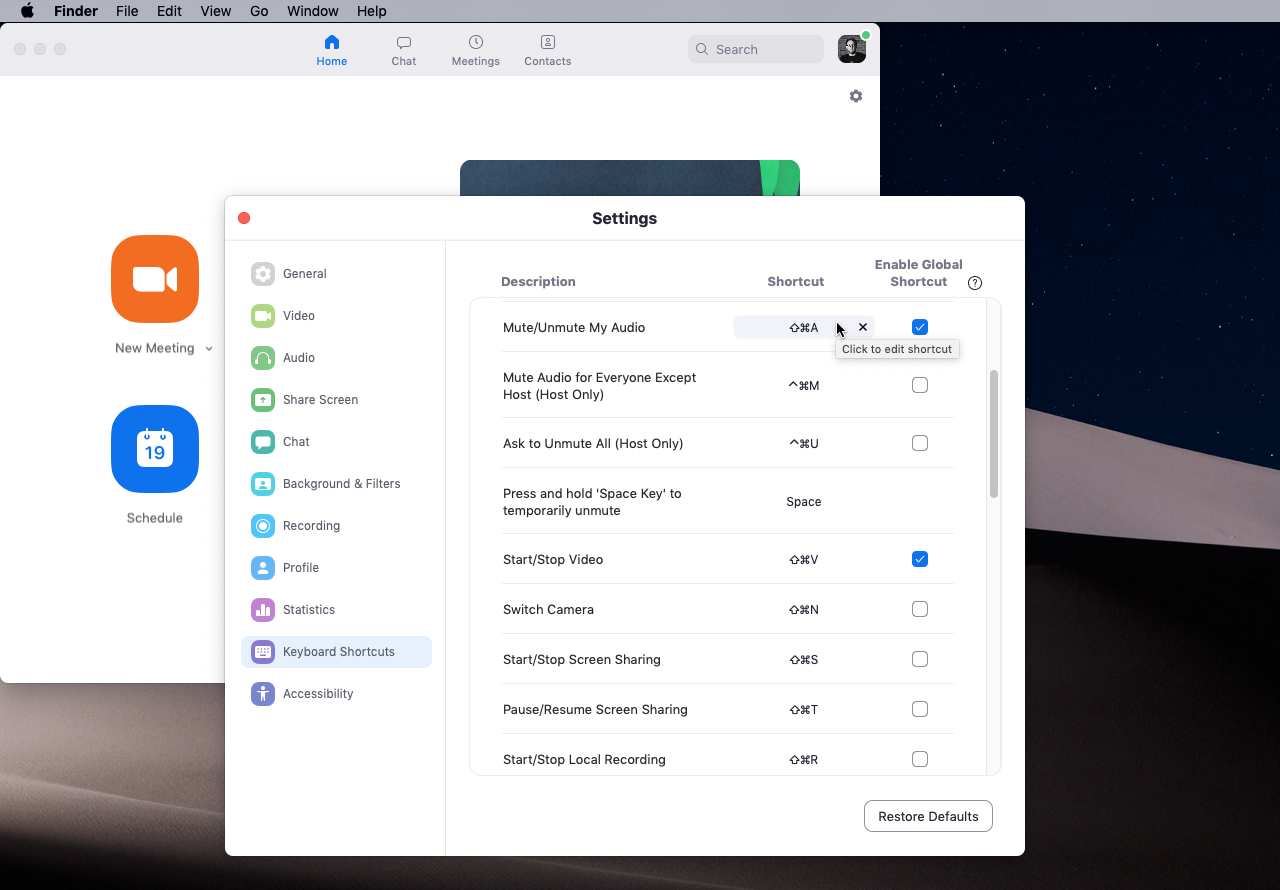 Nearly all of the shortcuts allow for customizing. Just click on the already populated shortcut and it should allow you to edit it. 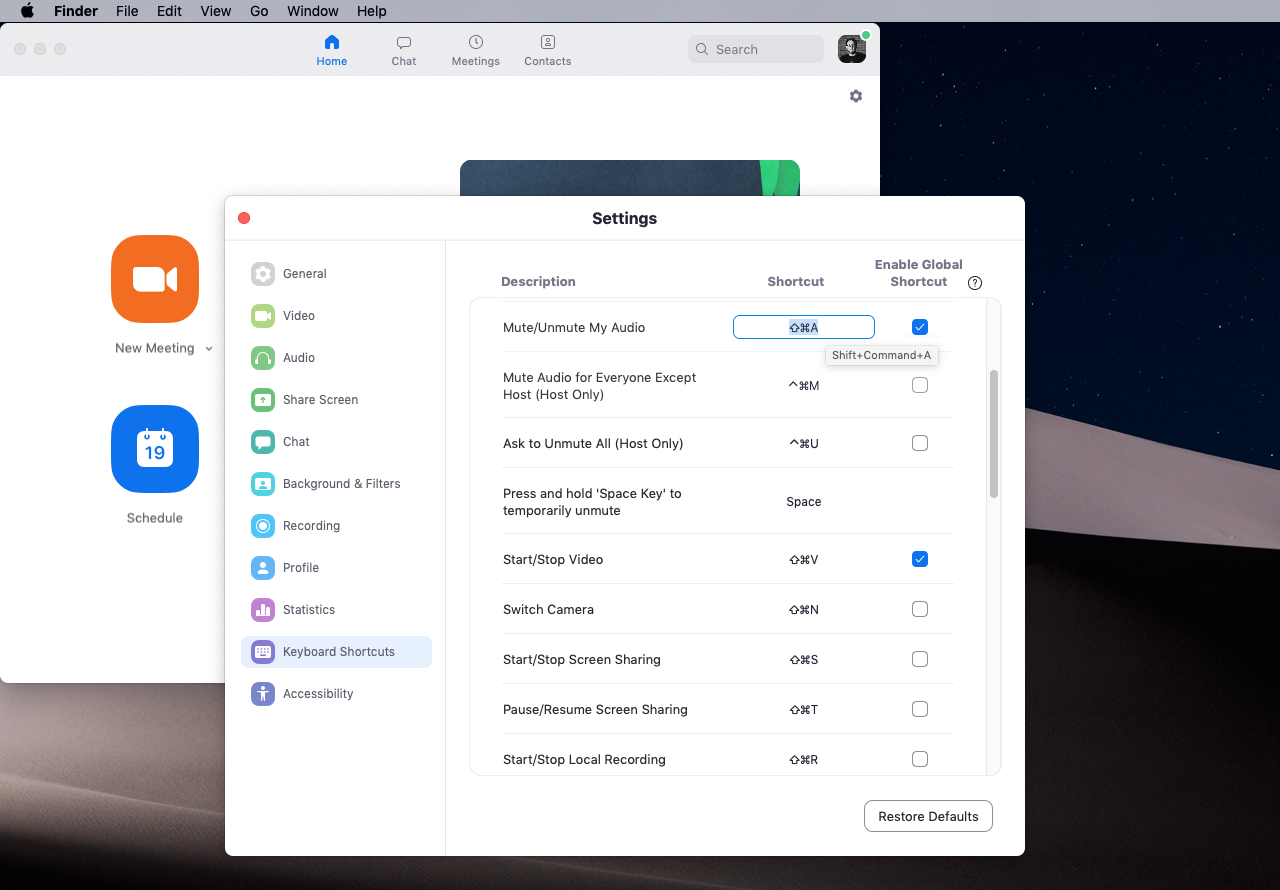 Once it’s highlighted and ready to be changed you can just press a button on the 8K Controller and it will populate the field. Let’s press the F13 button. 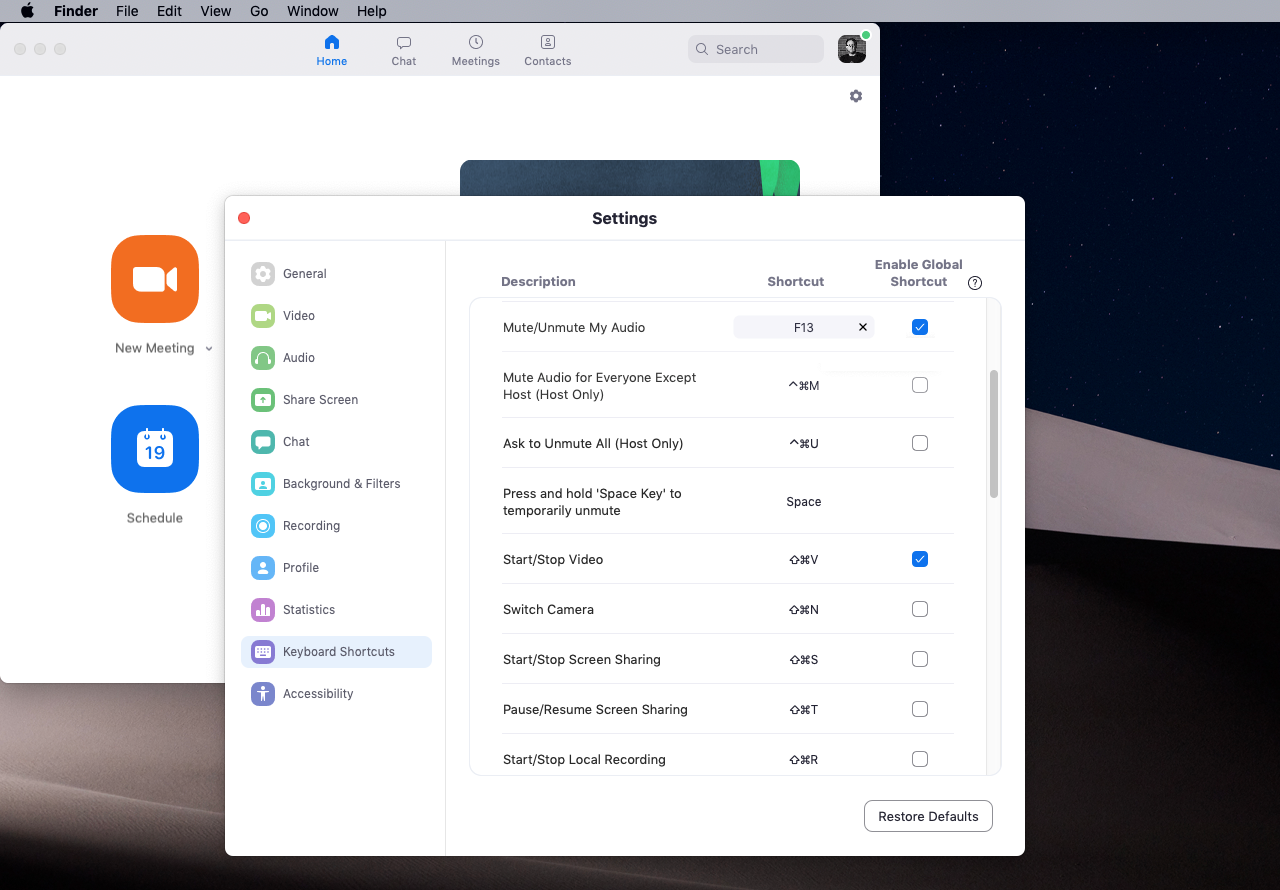 Boom! We’ve now got F13 (the first button on the 8K Controller) set to mute/unmute Zoom, and it will work globally, no matter what application has focus. But wait, there’s more! We can keep going… Here’s a list of all the shortcuts I set.

Well, there’s seven, which isn’t too bad. Zoom on macOS does not recognize F20, though on Windows 10 it works fine. This was all done with the default F13-F20 that the 8K Controller uses. If you really wanted something custom, we can program the controller to use any key commands found on the Zoom Hot keys and keyboard shortcuts page, including the commands that are not customizable in the settings. 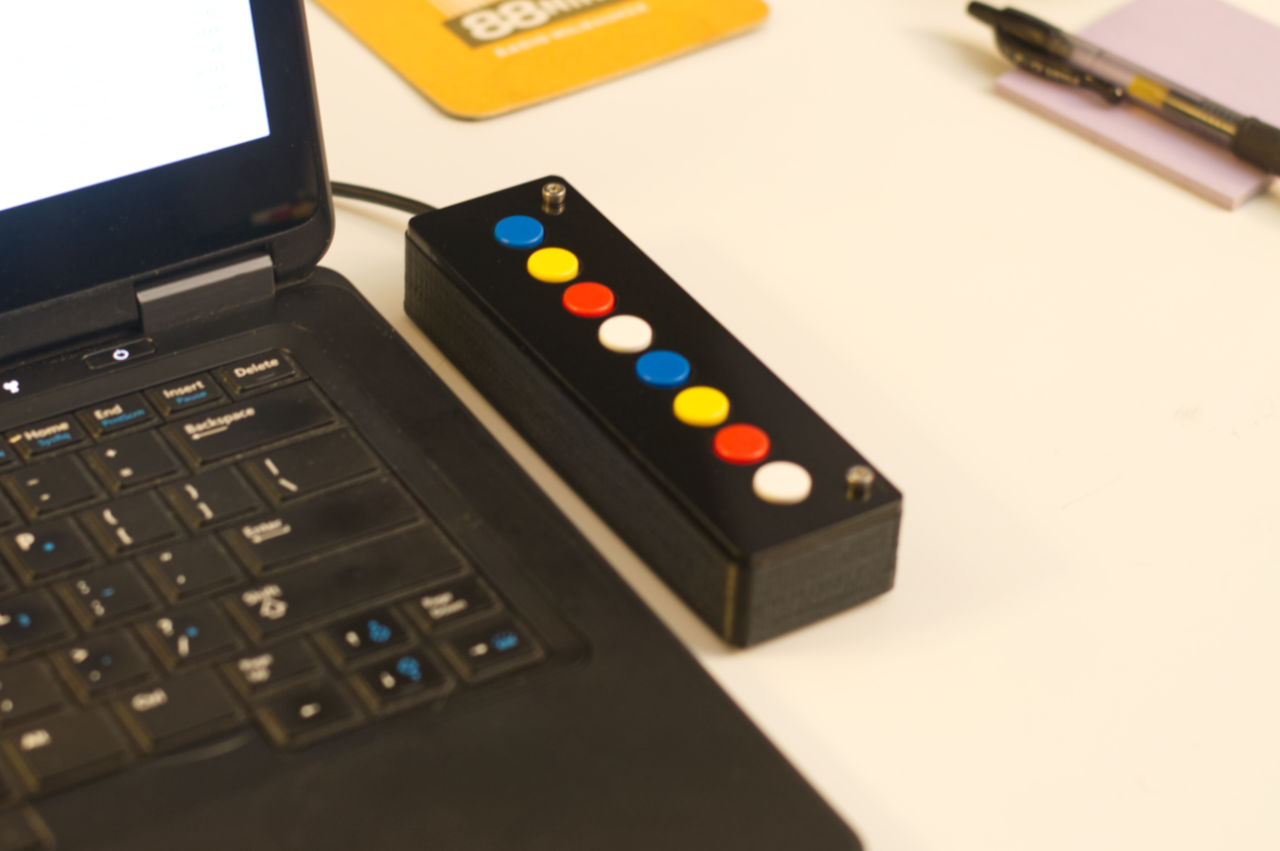 In our previous installment for the 8K Controller we used Quicksilver on macOS. This time we’ll use AutoHotKey which runs on Windows. 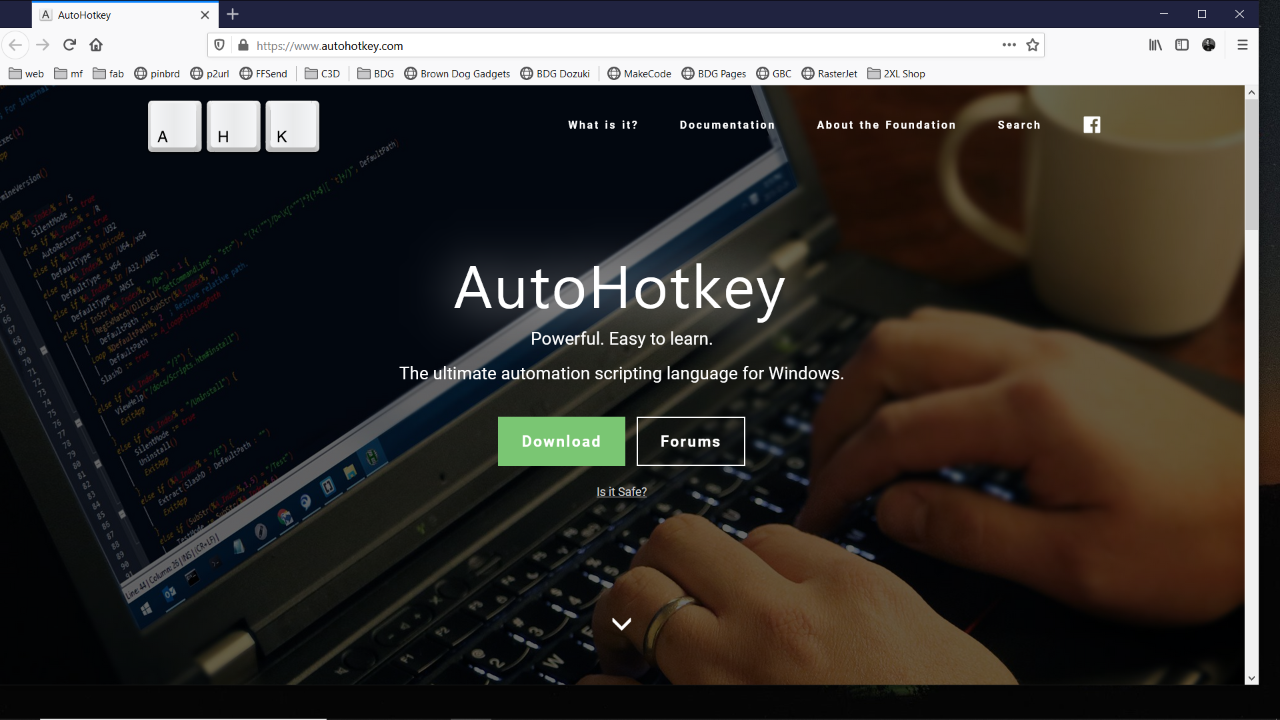 While I’m not using Windows as much as I used to, when I was building museum exhibits that ran on Windows I had a great collection of AutoHotKey scripts that fixed a lot of annoying things. It’s free, and pretty awesome. If you’re a Windows 10 user it’s definitely worth checking out. And hey, we’re going to use it right now! 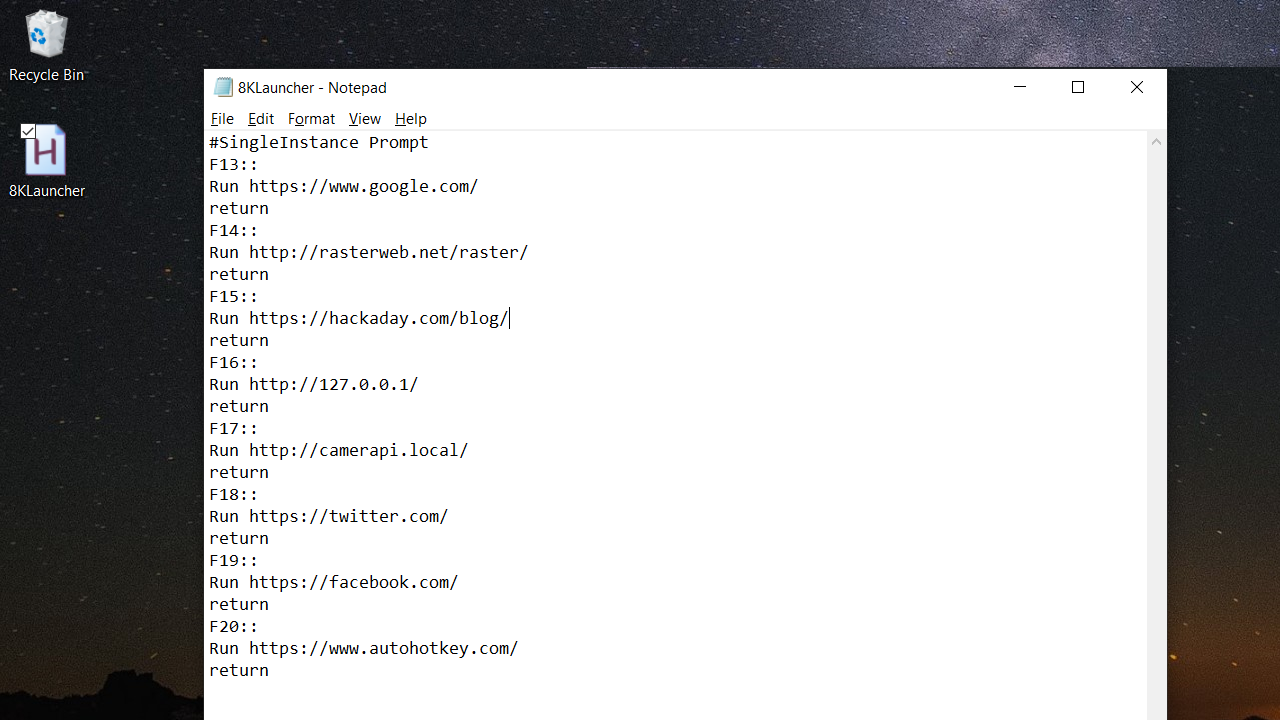 You can easily write AHK scripts that will respond to hotkeys (I mean, it’s in the name!) Once you write your script you’ll want it running all the time. I just made a shortcut for mine and dropped it into the Startup folder so it would be running automatically each time I started my computer. 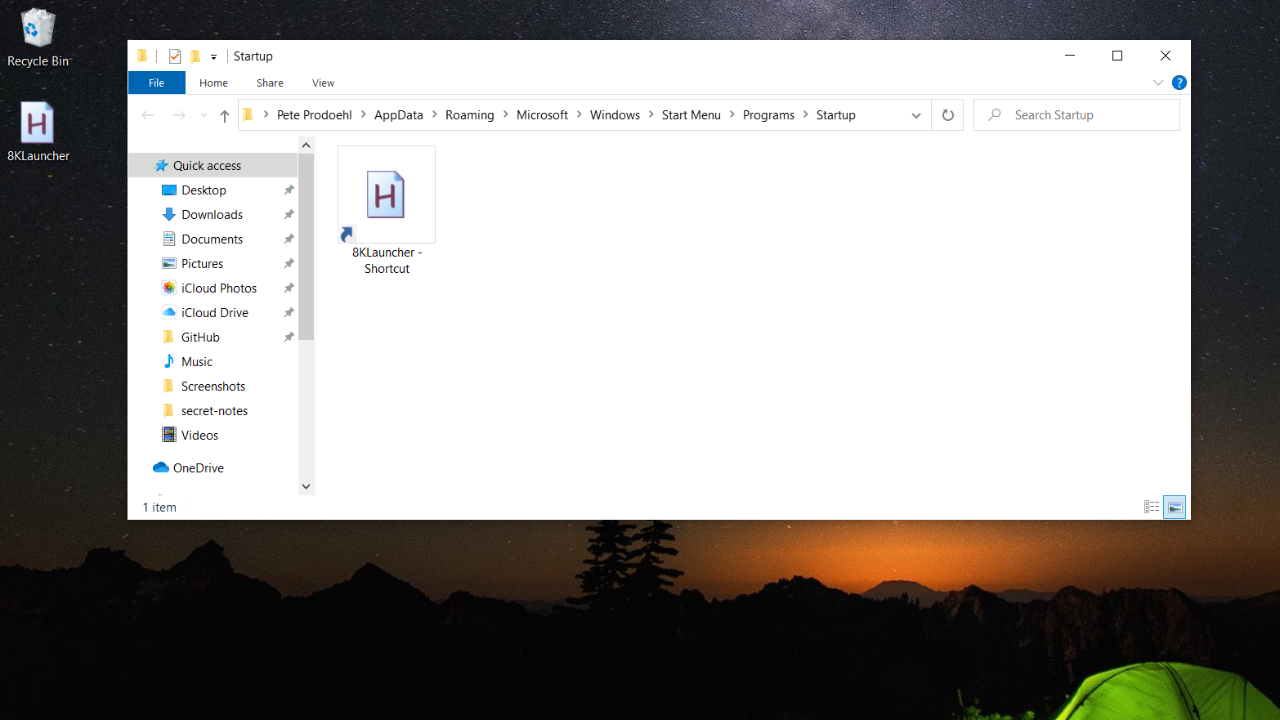 And what is this magical code I wrote? Well, it’s extremely simple. Not complex. Easy. Really. Check out the code for 8KLauncher.ahk. It really is easier than Pi.

And of course you are not limited to just opening URLs with AutoHotKey. It’s extremely powerful. I just wanted to choose a demo that was on parity with the previous example. 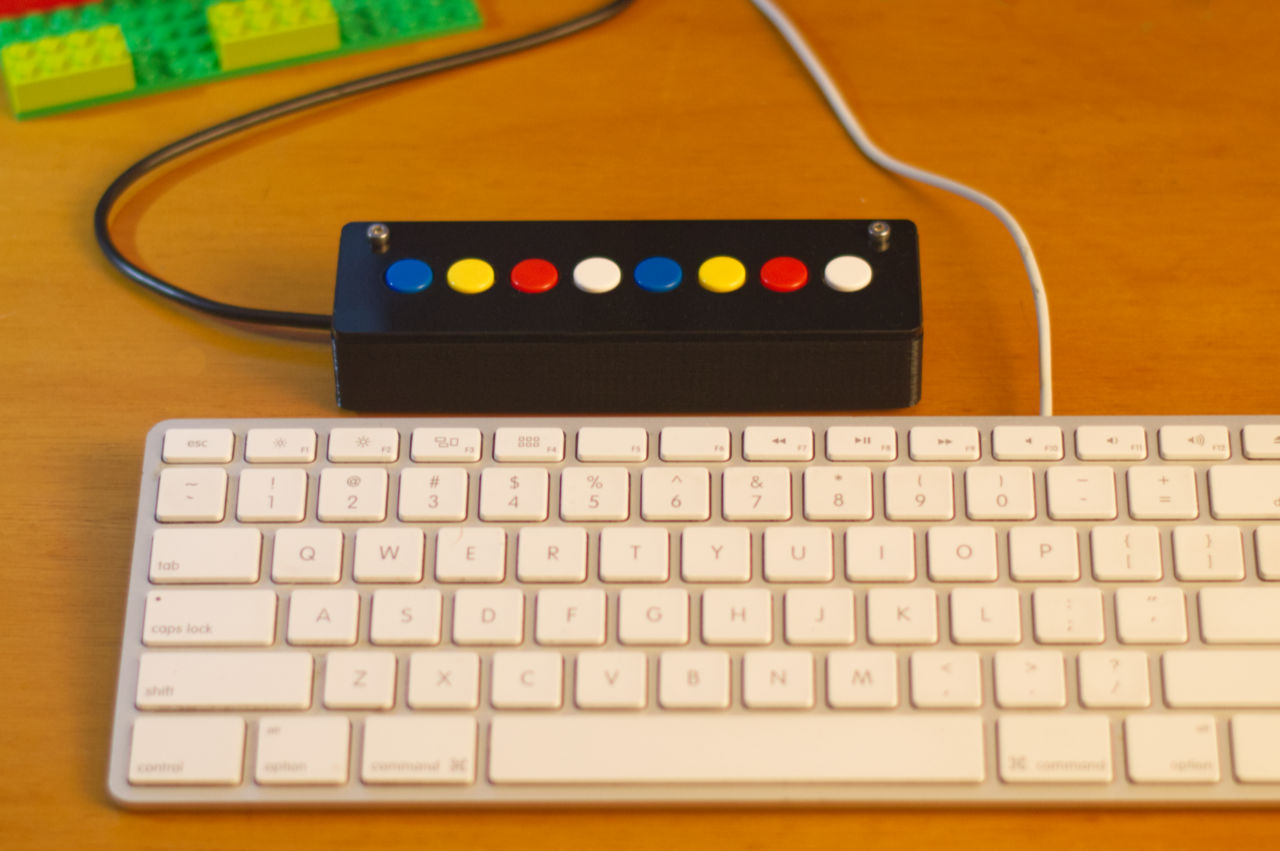 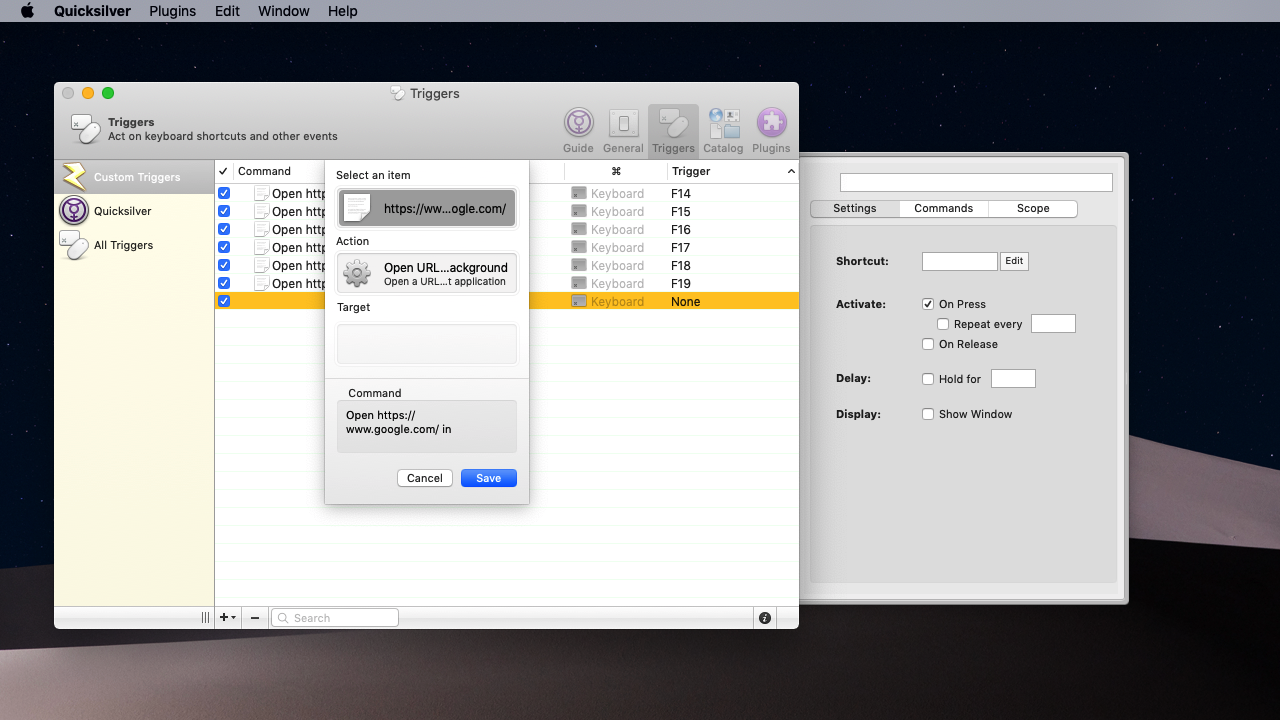 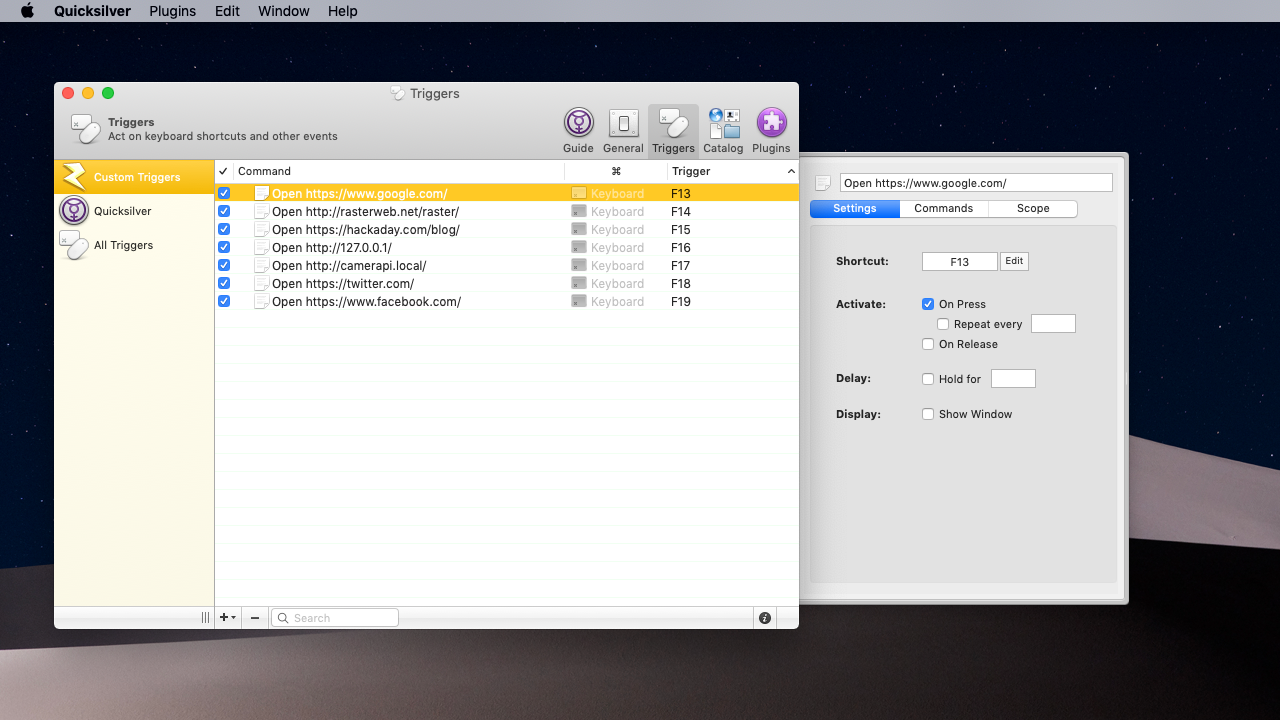 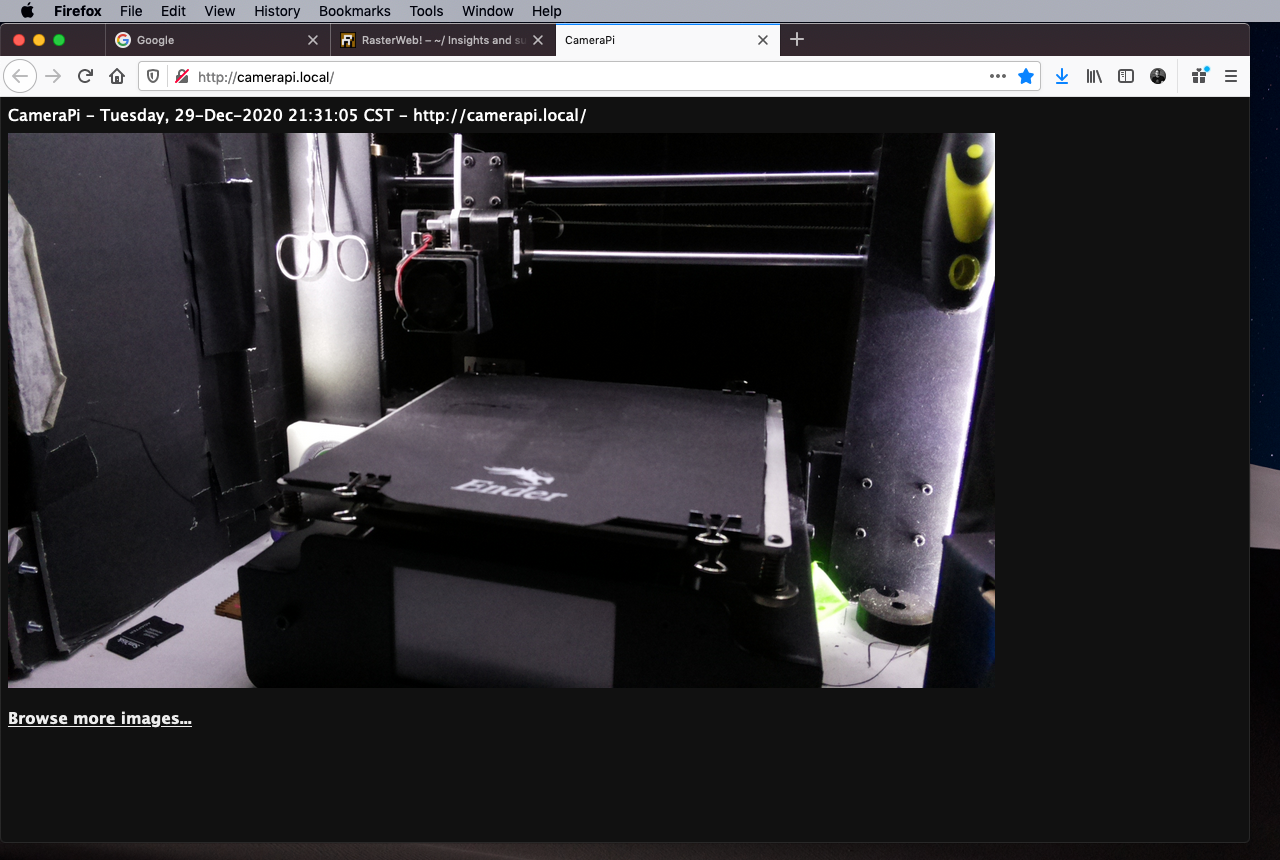