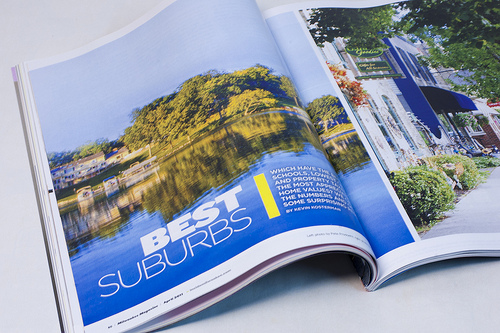 It’s that time of year… Let’s talk politics. You choose one side, and I’ll choose the other. It’ll be fun. (But not really…)

I read a post yesterday about how someone was amazed by how they could feel so different from their friends, neighbors and co-workers on certain issues, and how the divide in US politics seems to have widened more and more in recent years.

To some degree, I blame the Internet for this (supposed) widening of the gap. By that I mean, I think people being able to freely and easily post (to a worldwide audience) their beliefs has made these divisions more apparent.

Ten years ago you’d probably have to go to a specific political forum on the Internet to get into politics, and maybe five years ago it was political blogging that let people spew their beliefs freely, but now, with the recent rise of things like Twitter, Facebook, Flickr, and other sharing tools, it’s way to easy to determine someone’s beliefs. In some cases a single photo, or even a post of less than 140 characters, is all it takes to determine the political affiliations a co-worker or acquaintance has. Are posts the new bumper stickers and yard signs?

Times were, you didn’t discuss politics at work… and while that may still hold true in many places (and I think it should in many places) it’s become fairly easy to determine the beliefs of others by what they say online, unless they say nothing, or are selective in what they say… which for some of us, is pretty damn hard. 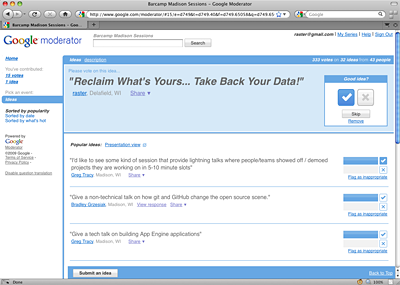 The following is a proposal for the use of machine tags for content related to Bucketworks. I’d love feedback from people familiar with machine tags, and people involved with Bucketworks.

The idea behind machine tags is adding a sort of namespace and hierarchy to a tagging system, and to assign it to a specific thing.

So for Yahoo’s Upcoming site (which lists events) PhotoCampMilwaukee had a tag like this:

These are used by Upcoming, which uses the Flickr API to gather photos for display on it’s site.

Now, we can assume that every event at Bucketworks would have a unique ID number, and use something like this:

This number could come from Drupal, CivicCRM, SalesForce, whatever… Just needs to be unique, and referenceable.

Now, we can see the same thing with users… on Flickr, if I see that Gabe is in a photo, I could use the tag:

So… extended to Bucketworks, if Gabe’s username there is “gwollenburg” we might use:

Hmmm, maybe Gabe is not a member… and lots of people who come to events at Bucketworks might not be members (yet!) so maybe it is better to use “person” (but then, “user” could be the proper term as well, as the people are “users” of Bucketworks, right?)

Obviously every person needs a unique (to the Bucketworks network) username we can reference them with. (Note that I used Gabe’s Yammer username “gwollenburg” and not his bucketworks.org username: “heygabe”. (Is there also a username in SalesForce? It would be nice if there was a way to cross-reference all of them, though really, we want the most publically used one, so they are easy to determine.)

Jenn asked about tagging photos at Bucketworks with the room names, so we might use:

Here are photos on Flickr with the tag bucketworks:space=playspace

(I went with “space” rather than “room” because I think it’s open to a wider interpretation, and luckily, Bucketworks seems to agree…)

(Are you thinking about geotags yet? They are another form of machine tags, and we should be using the coords for Bucketworks as well…)

The thing about machine tags is that you don’t so much just “come up with them” as they are defined by some entity, and then presented, and (hopefully) used.

So, if we did come up with a bunch of these, we would need to make them public, promote the use of them, show why you would use them (what cool things could be done, like, a slideshow with all photos from an event at Bucketworks) and having tools that make these things valuable would also be good…

What’s that? This reminds you of RDF, well, that’s okay :)

I’m never sure if I think about these issues more because I’ve been involved in publishing for over 20 years, or if it’s because I’m a big fan of Creative Commons, or because I create music and images… or maybe it’s a combination of all those things…

Chances are, if you are reading this blog, that you are a publisher too. Most us are nowadays… If you have a blog, or a Flickr account, or upload videos to the web, you are a publisher. So my question to you is, do you think about the rights of others when you publish something you created, and incorporate their work?

I’ve seen it too many times in videos… someone puts together the visuals, the part they created, and then grabs some artist’s song to drop on top of it. Often it will be a song from a well known artist, used without permission. People often say “I’m not making money from it” or “It’s just for fun, no one is really going to see it” but saying those things dismisses the value of the artist’s work, and missed the fact that by publishing, you are showing it to the world.

Worse yet, is when people do this and re-license the work. Sorry, but you can’t just grab some Foo Fighter’s song, use it in your video, and put it under a Creative Commons license… or can you?

This is where I think things get a little gray. I mean, my old pal Dave Slusher of the Evil Genius Chronicles often uses material in his shows that have different licenses, and makes note of it in the show. So while the portions of his show he creates are under a specific license of his choosing, other parts (often songs) are not.

So the question is, can you create a work, put it under a license, and use material from different licenses in it? We start to see that whole “infection” thing they talk about in the software world.

I don’t have the answer to this, and it’s one of the continually nagging parts of licensing, and copyright, and Creative Commons I think about.