Since the iBook died (R.I.P. and if you are keeping track, that’s 2 Macs that have died so far in 2007) it was time to revive the old Powerbook G3 (Wallstreet) and get computing!

The last time I even mentioned it was 2004 when the power adapter needed repair. After that I had a G3 iBook from work to use, until I didn’t, then I just stuck the old Wallstreet in the office to be forgotten, except when I stole RAM from it last year.

Well, it’s back folks! I am now using a Powerbook G3 running Mac OS X 10.1.5, and I’m trying to get apps on it. So far I have Firefox 1.0.7, and jEdit 4.1something on it, and am trying to find a version of Adium or Fire that will run on it. I think I’m stuck with Terminal.app over iTerm too… Sheesh, talk about the dark ages! I don’t even want to think about Thunderbird.

Wifi? Well, sort of… thanks to wirelessdriver.sourceforge.net and an old wifi card I had laying around. One problem, the card does not work with WEP, so while I can use it in my own house (by turning off WEP and restricting to MAC addresses) using it out and about is pretty much impossible without an ethernet cable. I also tried a USB PC card and a USB wifi adapter, but that didn’t work. I’d actually consider getting a wifi card that would work with WEP (and Mac OS X 10.1.5) if I could find one for cheap enough.

Anyway, I am mobile again… if you consider “mobile” sitting on the couch browsing the web very slowly.

It’s been over a month now since I got an iBook. I’ve had old PowerBooks before, but they were never that portable (meaning they had almost useless batteries, and no wifi.)

So, having a working laptop is an interesting thing. I know, some people live by their laptops, but I’ve always been a desktop guy. These are my observations so far on carrying around and using an iBook.

Those are my notes so far. I’m sure I’ll have more as I go. 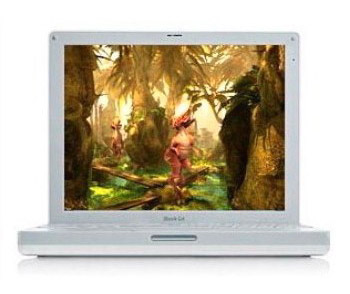 If all goes as planned, we should be mobile by next week with a 1GHz iBook G4/512MB/30GB/CD/AirPortCard…