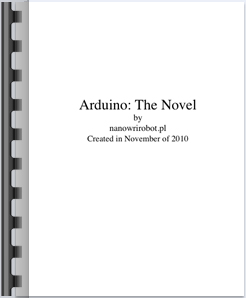 This year I did it again, and I’ve also published the code I used to write the novel. (See nanowrirobot on GitHub.)

The script needs a source to do it’s work. I did my original development by just pointing it at /usr/share/dict/words which creates some of the most beautiful gibberish you’ve ever seen. You can also just point it at a text file, and it’ll use the words in that. That’s what I did last time, and this time as well. Since this one is titled “Arduino: The Novel” it had better be about the Arduino, right? I ended up creating a word lists from the HomePage, Introduction, FAQ, and ArduinoBoardUno pages of the Arduino web site, and built a list of just under 1,000 words. The results were astounding…

And that’s not all!

Wow! Have you ever read a computer generated novel about a microcontroller with such suspense, drama, and intrigue!?

And look! You can download it in a variety of formats:

Actually, it’s pretty terrible, unless you are a fan of random acts of writing. If you want some writing that makes sense, take a look at nanowrimo.org, where you can find information about novels written by real people.

If you’re more interested in microcontrollers (specifically the Arduino) maybe you want to read about a Trashcan Accelerometer, or Baker Tweet, or a steampunk bandwidth meter…

So last year, during MilwaukeeDevHouse3 I gave old pal Boone a bit of guff as he was doing some writing for National Novel Writing Month and I told him I would just write a Perl script to write my novel for me.

Enjoy some of the excerpts below, and then download a PDF of the whole thing…

I ended up using source text from various places… Text of Obama’s Speech: A More Perfect Union, 75 words every sci-fi fan should know, and I believe the Unofficial Jargon File Word Lists. At least that’s what my notes tell me… Here’s some more!

Anyway, you can find the code here: https://github.com/raster/nanowrirobot

I don’t review many films here (maybe I should!) but I recently saw Persepolis, which was adapted from a graphic novel into an full-length animated film. I really liked the style of the animation, which actually looked like a graphic novel translated to film, rather than a graphic novel make into a live-action film, which probably works fine for most superhero genre films, but probably not so much for this sort of story. (The film’s animation was done the old fashioned was, hand drawn!) I also learned a lot about Iran which I hadn’t known, though honestly, my knowledge of Iran was pretty minimal, as I’ve lived in the U.S. my entire life, and well, you get a tainted view of other countries from here.

If you get a chance to see it, watch the DVD extras, as there’s some great stuff in there about the story behind, and the making of the film. I mean, if you’re into filmmaking that is…