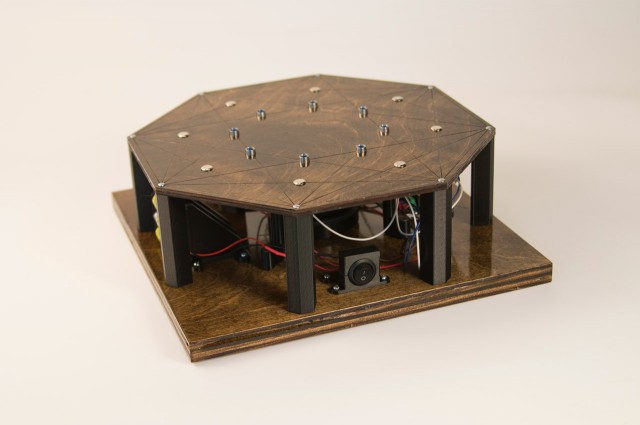 For this year’s WMSE Art & Music event, I created a new board I call OctoNoise. It’s an eight note piano featuring capacitive touch pads, LEDs, a Teensy LC microcontroller, and some fine woodworking. This is somewhat similar to last year’s piece. 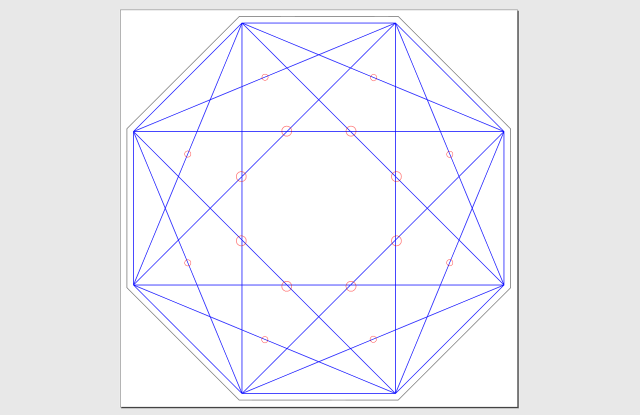 You may know me for my work with decagons, but I also work with octagons, and this pattern is known as a 16 cell and it worked well for my design which utilizes 8 touch pads and 8 LEDs. 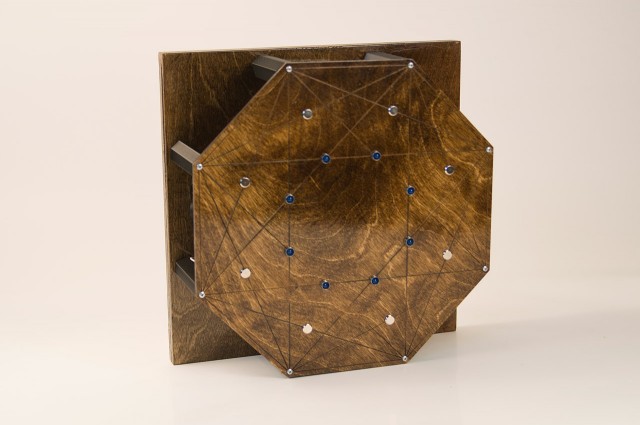 I’m not an amazing woodworker, but after laser cutting wood I can typically sand it, stain it, and add some polyurethane. At least it looks (somewhat) nice. I didn’t alter the bottom piece, and I just left it as a square, the way I received it from WMSE. My original design for this piece (over a year ago) was a bit different, but I wanted this to match the style of last year’s WMSE piece (and I was a bit rushed getting this done.) 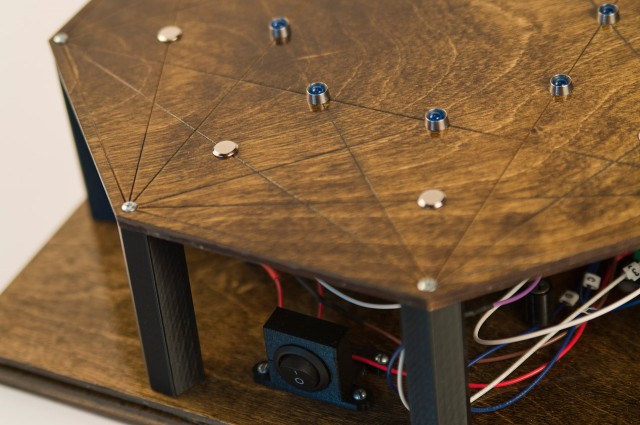 The OctoNoise features and on/off switch, which is handy because it runs on batteries. I can’t tell you how many times I’ve made electronic things for myself and not included and on/off switch. It’s nice to have one! When you turn it on the touch pads calibrate for about 5 seconds. There’s a startup sound that happens during calibration. (I added a note about that on the back of the piece.) 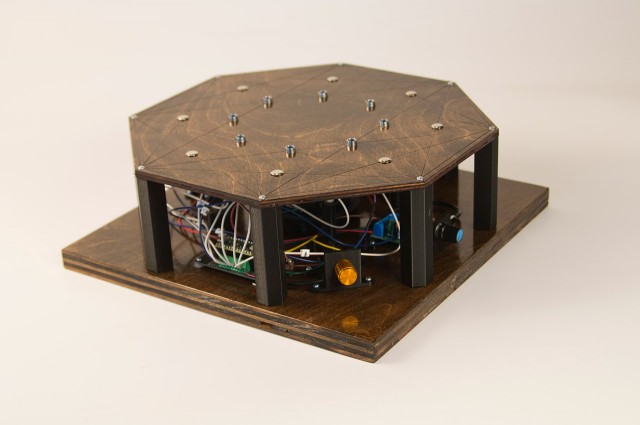 There’s a “somewhat” hidden control knob on the side that ajusts the delay between notes. The way the code is written, it plays one note at a time, but you can alter that to very quickly (or slowly) oscillate between multiple notes. You can get some interesting variances in sound by turning the knob.

Note that it is difficult to turn the knob while also touching the pads to make sound. This is by design, as it’s also difficult (if not damn near impossible without using various parts of your body) to play all the notes at once. This was done to encourage collaboration and playfulness. 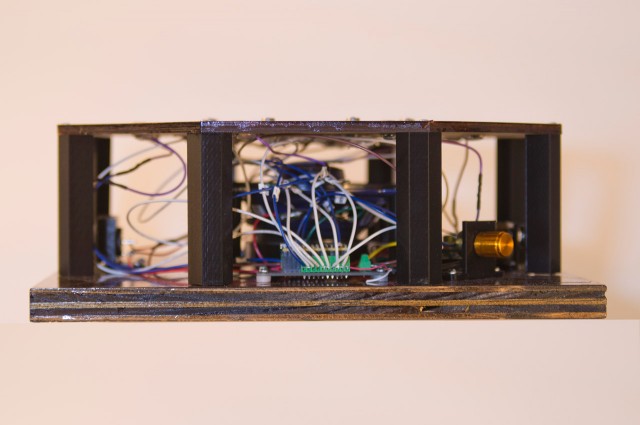 Here’s a side view. The height was determined by the speaker that was chosen. Once again we’ve put the electronics on display as part of the piece rather than hide them inside an enclosure. They are mean to be celebrated! (Each wire has a label showing what it connects to, if needed.) 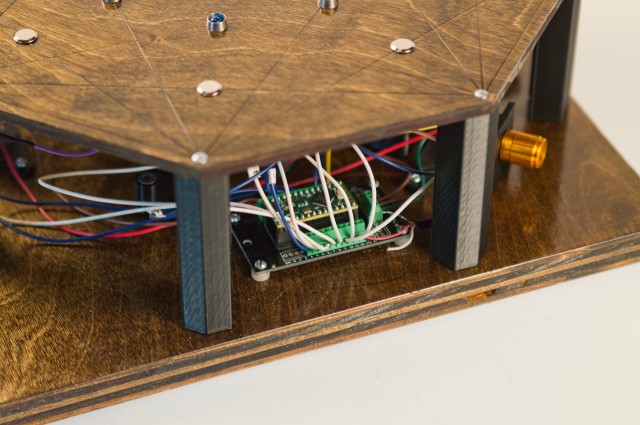 Here’s the Teensy LC, which runs the code. The board has built it capacitive touch pins, which make writing the code fairly easy. The notes used are C5, D5, E5, F5, G5, A5, B5, C6. This is real piano, and you can play actual songs. I based the code on a project I did for Brown Dog Gadgets a while back. You can check out their Touch Piano on Github. 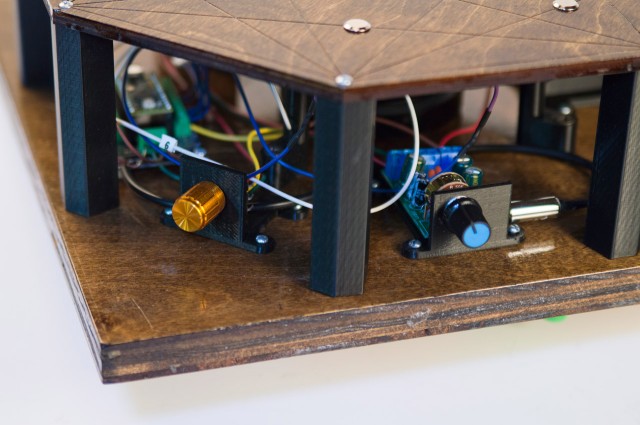 This device also contains a built-in amp with a volume control. Again, a sometimes rare feature in the things I build. Often amps require 12 volts and that’s not always fun to deal with, but I’ve found some that work on variable voltages from 3 to 12 volts, so running them at the same voltage as a microcontroller becomes very easy. 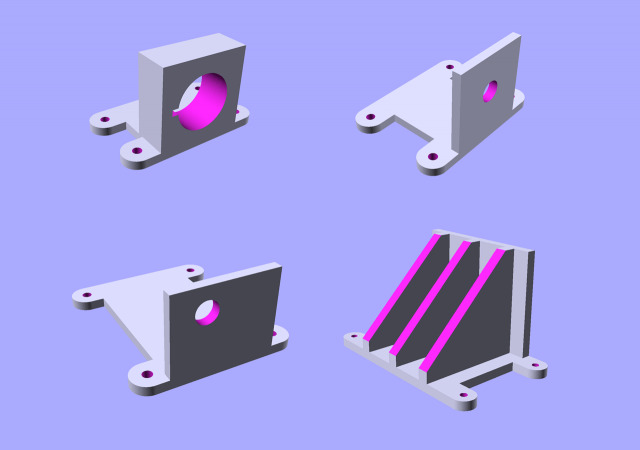 Besides all the wood and electronics, there are some 3D printed parts that pull it all together. The on/off switch, delay control, amp, and battery holder all have their own 3D printed part that they attach to and then easily attach to the wood with some #4 screws. Once again, things are left “open” to celebrate rather than hide the electronics. 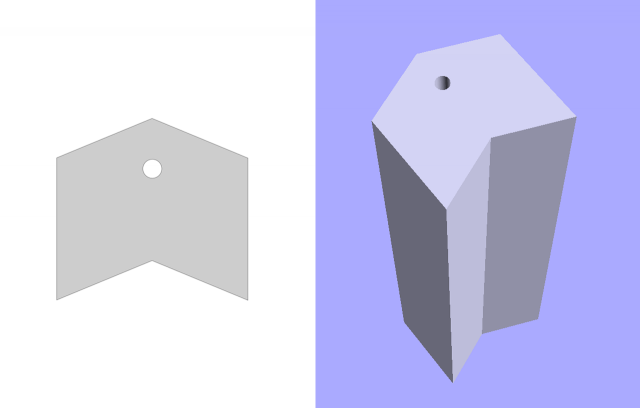 The other 3D printed pieces are the custom standoffs that raise the top piece above the bottom piece to (partially) enclose the electronics. I created a 2D profile from the original artwork used to laser etch & cut the piece to create the correct angle. I then extruded that design to make the tall standoffs and printed 8 of them.

Oh, one thing I forgot to mention. I liked this piece so much, I made another one so I could keep one for myself. As the old saying goes “If you’re gonna make one, make two!” So I did.

Finally, here are some videos, including one showing me playing both of them at once, which might never happen again!