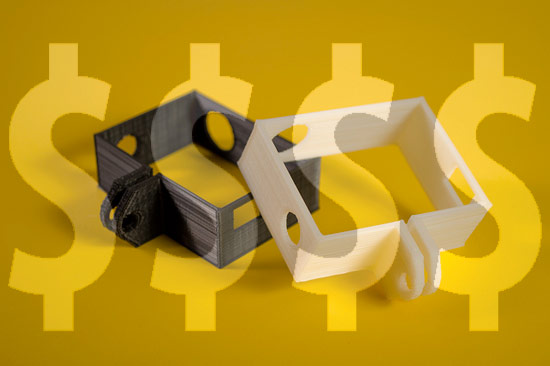 This is an interesting one, and I’m still not sure what I think about it…

I’ll start by saying that I’m a fan of open in that the sharing of knowledge is important to me, as is the sharing of sources, not just in software, but in other areas as well. Yes, there’s money to be made, but generally, besides the fact that money allows us to have a place to live, and food to eat, and all the other things needed to survive, I’m not really a fan. Money itself is boring, but it can allow you to do interesting things.

I recently posted about the GoPro Hero3 Frame I made. I made it because it was a thing I needed, and didn’t feel like spending $40 on the nice one that GoPro sells. I shared the design files because I thought they might be useful to others. I share things because I’ve gotten so much value out of others sharing things over the years. It’s been over 20 years that I’ve tried to live by that ideal. It mostly works.

I was quite pleased to see that someone found value in my sharing, and improved upon my design to create GoPro Hero3 Frame – Improved. Again, this is how I want the world to work. I made a thing, and someone else made it better. Everyone wins, right?

So anyway, I’m doing the daily browse, and I come across this blog post from Shapeways titled 3D Printed Stand for the OP-1 Synthesizer. I have little interest in a synthesizer stand, but I love 3D printing, and think it’s the future. In the post is a link to all the GoPro items on Shapeways. (Shapeways, for those who don’t know, lets people design things, get them 3D printed for themselves, and even sell them to others. It’s a great thing for people who don’t yet have a 3D printer, or want higher quality, or different materials, etc.) 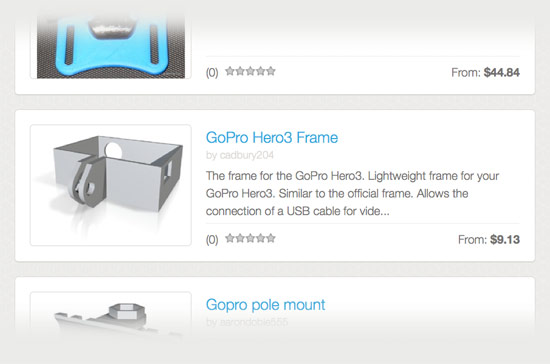 Where was I? Oh yes, I click on the link to see the GoPro related items and see a GoPro Hero3 Frame and think “Hey! Someone else made one too! Cool!” and I read the text, and it sounds just like mine! Now, it was about 4am so my brain was a little slow… but I clicked on the link… 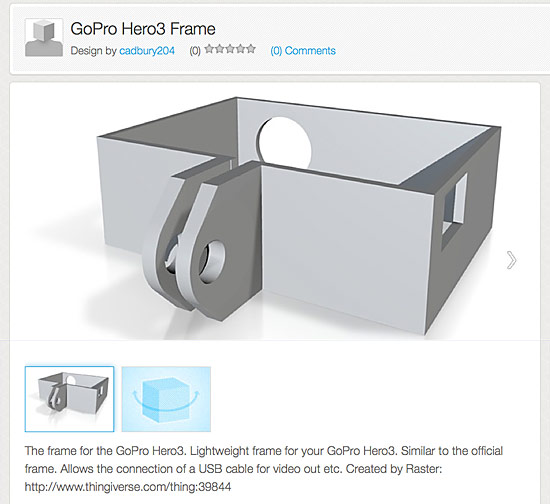 Holy Crap, that is mine! Yeah, that’s mine. And it’s for sale, but not by me. Here’s where you decide whether to freak out… and to what degree.

Now, I designed my item, and shared it freely on Thingiverse, and even used a Creative Commons Attribution License. I specifically wanted others to be able to have it. Mission accomplished, right? Right.

So the freakout… is it a good freakout, or a bad freakout, or a weird mixture? Do I want to be in the business of selling GoPro Hero3 Frames? Probably not. I have enough other business to deal with, and as I said, GoPro sells one, and it’s probably of much higher quality. Am I upset that someone is using my work? I shouldn’t be (right?) The description does say “Created by Raster” and has the URL (but not a link) the the Thingiverse page. But who is cadbury204? They have no designs of their own in their Shapeways shop. Is it some automated bot that pulls items from Thingiverse and sells them on Shapeways? I don’t know… if it is, does that change things? I don’t know…

If I think about the “spirit” of open source, as it’s ofter referred to, is this “cadbury204” following it? Are they providing value just by allowing someone to easily order the item through Shapeways? Are they just out to make money from the work of others? Again, I don’t know… I don’t even know if I should care, but I guess I do, mainly because I find it interesting.

And, I’m interested to hear what you think about it.