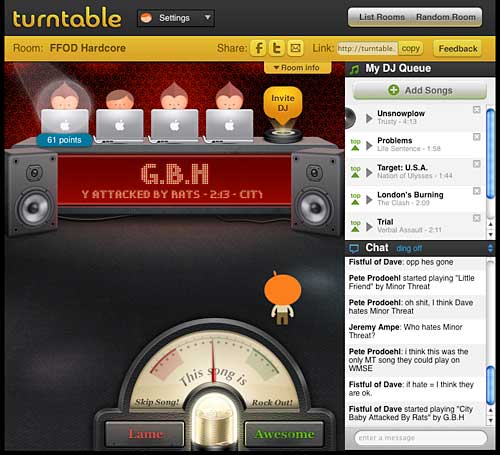 Damn… this turntable.fm thing is a bit addictive!

Dave provided a fistful of awesome when he posted about it, and it probably helps that we were in bands together and liked a lot of the same stuff.

Turntable.fm uses Flash (urgh) and the search isn’t that great, but you and some friends who are into the same genres can have a good time taking turns “spinning discs” as it were. I finally decided on a session for BarCampMadison… How Social Can You Get?

I’m hoping to look at the typical “social networks” like Myspace and Facebook, but also look at how sites like Digg, del.icio.us, last.fm, Flickr, and others leverage social networking to enhance what they are already offering.