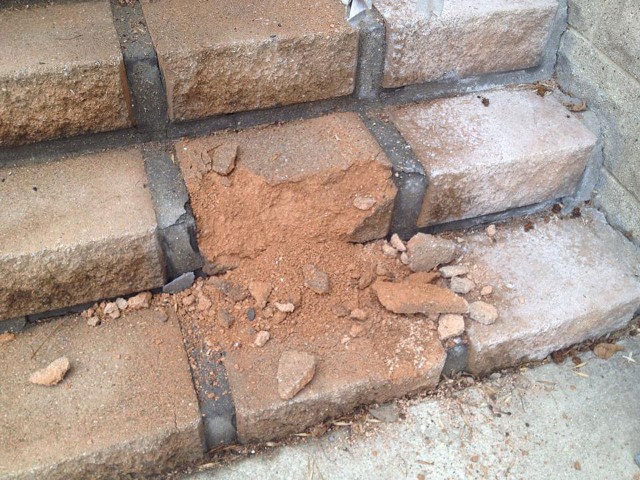 We spent the weekend replacing the crumbling infrastructure that was our front steps. We moved into this house in 2013 and less than a year later the steps were looking pretty sad. They were built by the previous owner using stones that weren’t really meant to be steps. The first repair we did involved pulling out the bad stones are replacing them. This was a quick-fix that lasted long enough for us to do a complete rebuild, which is what we did. 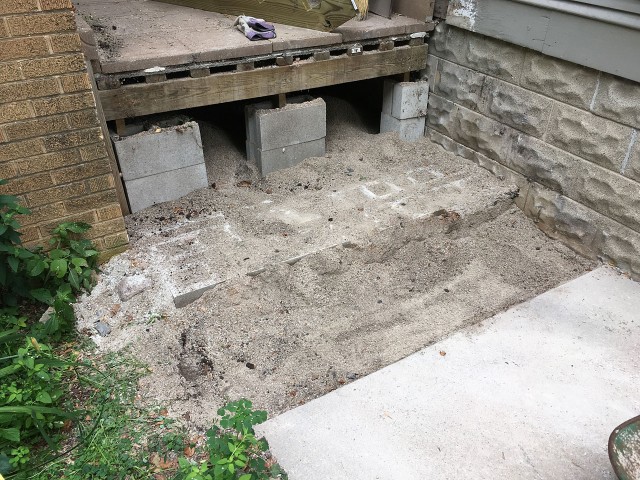 We spent Friday pulling out all of the stones. I got to work with a chisel and hammer and started the removal and when Dana came out to check on me she explained that I was working way too hard and the stones would just pull loose without much chiseling. As usual, she was right and things went much faster after that. 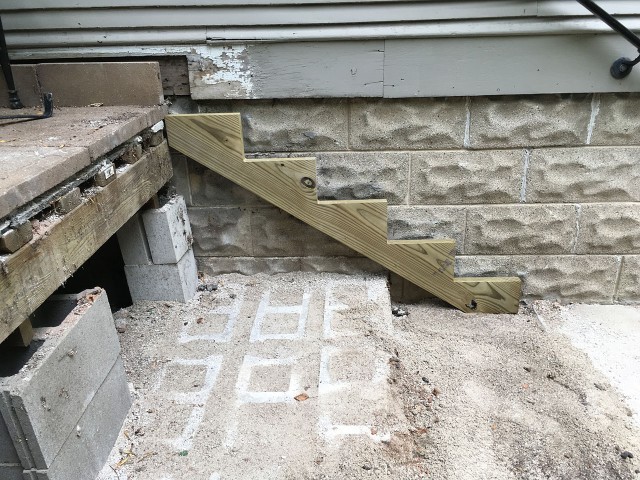 The first real problem: The porch is 32″ high so a 5 step stringer was required. You’ll notice that the stringer doesn’t quite reach the concrete. Not good. We thought about pouring concrete, but that wasn’t something we wanted to do due to the skills required (which we lacked) and the time it would take. Our alternate plan was to lay down gravel and then put some paving stones in place for the stringers to rest on. Here’s where Hank comes in…

After I put those 20+ cinder blocks on the curb we ran to Lowes (again) and figured we’d put a note on Nextdoor or Craigslist mentioning a big pile of free cinder blocks. Well, we never got a chance because when we got back the cinder blocks were all gone. I put out a few more and eventually some guy showed up with a truck and Dana let the guy know we had more stones (all the ones from the steps) and we then met Hank. Hank said he did concrete work and would take all the stones we wanted to get rid of. Dana then told Hank she loved him (and yeah, at this point I did too, since we was carrying hundreds of pounds of stones away from my house.)

Hank then gave us lots of advice and a few suggestions for how to fix things up. He suggested quick set concrete and some 4x4s as posts under the stringers. We thought about that and while Hank drove away to unload more stones (including 5 buckets of busted up stuff) we ran to Lowes (again) and when we came back found that Hank had made another trip, grabbed all the stones we offered him, left us a few 6x6s pieces of wood (thanks!) and his business card. Awesome. Thanks, Hank! 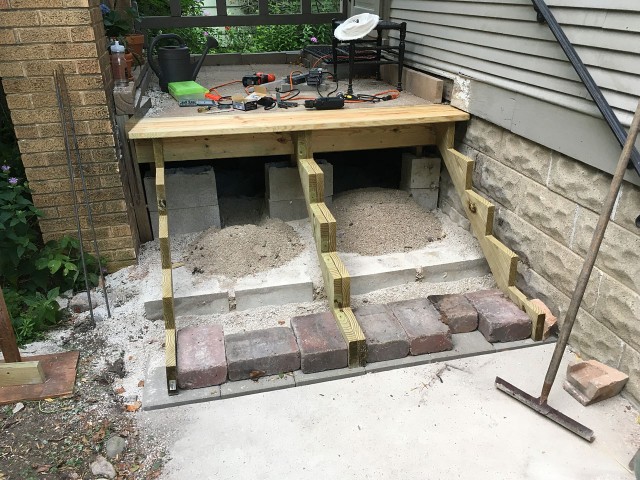 We originally bought 3 foot wide steps (because that’s all Lowes had) with the idea we’d do a double stringer in the middle and basically two sets of steps next to each other. After some discussion on the matter Dana made some phone calls and found out we could get 6 foot wide steps at Menards. While we prefer Lowes or even Home Depot to Menards, we drove over and picked up 5 of the 6 foot wide steps. I left the double stringers together since I figured more stringers are better, right? Right.

You might also notice in the photo that we added a 10×2 to the front of the porch so we could attach the stringers to something. This also helped push the steps out another (almost) two inches so the front would be a bit closer to the concrete, creating a smaller gap. 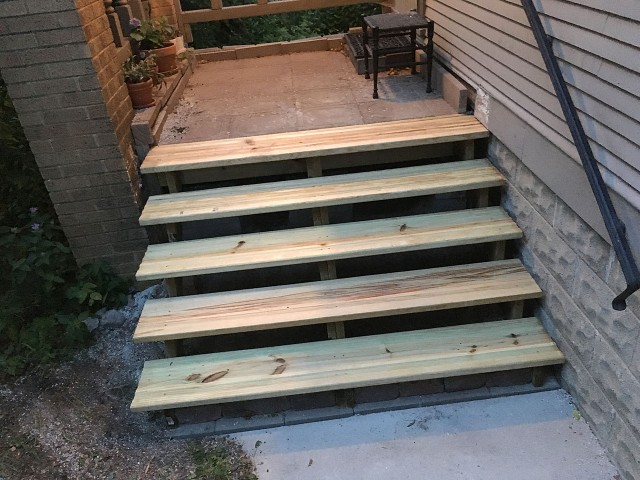 After 12 hours of fun on Saturday we ended with this. Stringers are in place (attached to the 10×2 board) stones are under the end of the stringers (with the rebar in place, as Hank suggested) and the steps are attached. Painted screws were use for everything so they don’t cause issues with the weather treated lumber. We still need to cut the boards for the risers and put them in place, and put a side piece on to make things a bit more cleaner, and keep the animals out, but the steps are functional, so that’s the important part.