Flattr is a way to reward people for the things they do online. You can check out this intro to learn more, but basically, with some money in your Flattr account, you can monetarily give thanks. It’s pretty much the old “tip jar” idea that bloggers had about 10 years ago, but the time is probably right for Flattr to be a big player in this market.

Big you say? Well, they just decided to open the floodgates, so you no longer have to give money to get money. They are doing this (I assume) to get Flattr buttons on everything, because now anyone can start asking to be Flattr’d or, paid, as it were.

For instance, on this very blog, where I’ve been providing you posts since 1997 (and other content even longer than that) there’s a Flattr button you can click, and it’ll let you Flattr RasterWeb!. (Note that I added a donate page a while back, which has seen very little action.) I’m still not sold on putting Flattr buttons on every blog post, and am just doing the entire blog right now.

So besides this blog, you can Flattr the things I do at Thingiverse. Expect many other sites to follow. Discussion and help forums seem like a no-brainer, and any site where you might want to “like” what someone does, or thank them in some way, may fit.

Will anyone get rich from Flattr? Well, right now it looks more like a “thank you economy” type of thing. I mean, no one every got rich from a “tip jar” right? But you get that “good feeling inside” as well as a small amount of cash, which should (for many people) be an incentive to keep on keeping on.

Did I mention you can Flattr RasterWeb!? Due to popular demand (one person asked for it) you can now donate money directly to RasterWeb!

What will this money be used for? To guilt me into posting more.

Yeah… that’s the brutally honest truth. Beyond that, I promise nothing.

Keep in mind, I’ve been doing this since 1997. How many other blogs have been publishing for that long, without giving up, quitting, going away, being deleted, getting “lost” on someone else’s hard drive or domain or whatever.

Also, I originally mistyped the title as “Donations will not be accepted…” which I think would have been a more amusing title. Wow Howza! It’s a crazy-time! Somehow my wife (aka “The Doctor”) secretly gathered up my friends and family and tricked me into going to Bucketworks (even though I was already there just an hour earlier) and confused me by standing around near a big statement of fact declaring it to be my birthday… 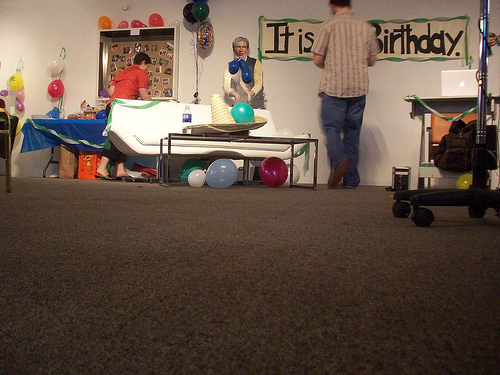 Yes, despite my own best efforts to completely ruin everything (unknowingly) things all worked out. Don’t worry folks, I had no idea… I mean, James came close to blowing things once or twice, but still, I had no idea. The award goes to The Doctor for the amazing acting she did throughout the whole thing.

And a big Thank You goes out to all of my friends and family that were there, making it the Best Birthday Ever, which is quite a change from last year’s Worst Birthday Ever. I’ve been told that media from the event may start showing up at PeteIsOld.info