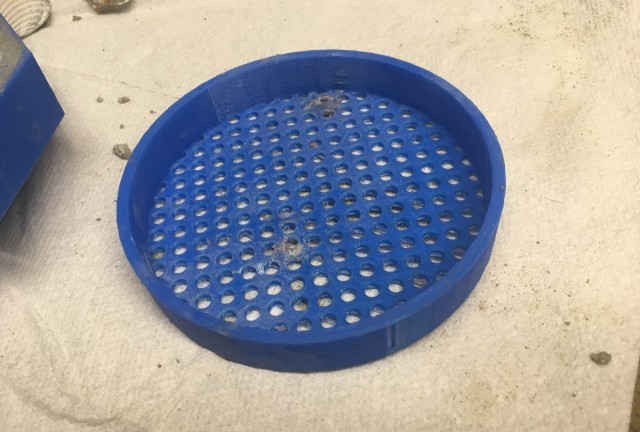 I needed a sifter to remove some small pebbles from concrete mix, so I designed and 3D printed one. Now, like many things that get 3D printed, you don’t always get it right the first time. After testing the sifter I decided it needed larger holes, so. I started on version 2. 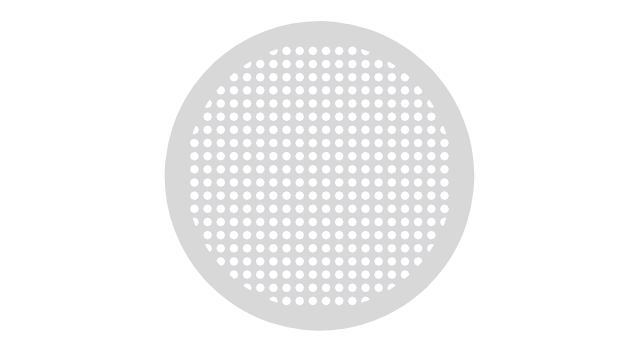 For version 1 I used Inkscape to quickly create a grid of circles (using the clone feature) and then differenced them from a circle. Once I had this done I exported as a DXF file and used that within OpenSCAD to create the bottom of the sifter. I added a ring and Bob’s your uncle. I use this Inkscape/DXF/OpenSCAD/extrude method sometimes, because it seems like the right way to do things, or because it’s pretty fast. But it’s not always the best.

The problem with the Inkscape/DXF/OpenSCAD/extrude method is that you have to go back to Inkscape and redo your DXF file if you want to make changes or tweak the design. This may not be an issue for many designs, but for some, I want the flexibility to easily change things.

So for the next version I redid the holes portion of the design in OpenSCAD. The great advantage here is that you can very easily tweak things like the size of the holes, and the hole spacing, and automagically see how it looks. (Note: in the image above you’re seeing the positive “solids” of the holes. In the final file I differenced them from another solid object to make them “holes” in the design.)

While the method of doing it all within OpenSCAD has advantages, the one way it suffers is when it comes to render time. I should note that in OpenSCAD you can choose how “smooth” circles are by applying a number between 1 and 200. It basically sets how many “sides” a circle has. You can typically use 100 and circles will look pretty circular, but you can also drop the number down to 6 for hexagons, 8 for octagons, etc. That said, at a setting of 100 rendering the sifter took nearly 15 minutes on my 6 year old MacBook Pro. Changing the circles to hexagons with just 6 sides took about one minute to render.

This is where The Cloud™ should save us, right? But while there are various versions of OpenSCAD running on public servers, no one is running a version that worked properly. And since OpenSCAD is a niche piece of open source software, I don’t know if this will change. But since there is a command line interface to OpenSCAD, maybe I can do complex renders on one of my more powerful computers. (Anyway, I’m getting off-topic, so let’s continue.) 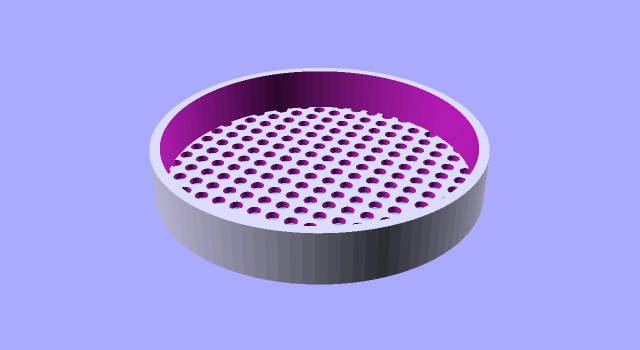 Hey, it’s a sifter! Yes, I designed and 3D printed a sifter. I often design things and then print them overnight so I have them the next day. 3D printing is awesome, but it’s often not fast. I did consider trying to make a sifter plate with a drill press, and then I remembered I had a laser cutter, and considered using that, but ultimately I was not in a hurry and 3D printing one seemed like a good idea. 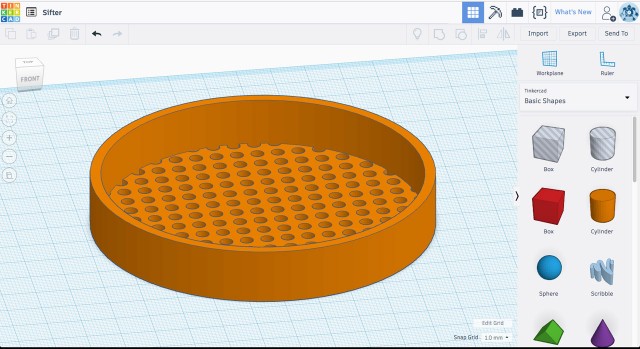 While I’m a bit more impressed with Tinkercad than I thought I would be, I still have the problem I had with Inkscape, that if I want to tweak some values, I need to redo work. In fact, I have to pretty much create a whole new model. For simple designs, this isn’t a huge deal, but it is a bit of a pain.

What’s a bigger pain is the fact that while I will always have copies of Inkscape and OpenSCAD to use, Tinkercad (and the files I create with it) may disappear. Tinkercad is own/run by Autodesk, and while it’s a great tool for beginners to get started with 3D modeling (without having to install any software) ultimately I’m concerned for its long-term existence (like any hosted/cloud service.)

I can easily edit the OpenSCAD files I created seven years ago, which is something that is important to me. That said, I do want to explore other software, because reasons, you know?

In the last month I’ve made some progress in my 3D modeling education, so I thought I’d provide an update. (Besides my last post, I got some good feedback on Google+) Oh, and just a reminder, my interest in 3D modeling all has to do with creating objects I can produce with a 3D printer like the MakerBot or the RepRap.

So what am I using (or not using) now? Here’s the list:

Google Sketchup
I’ve made some good progress with Sketchup. A few tutorials (and a lot of playing around) has me creating actual 3D models. You’ll want the STL Importer and STL Exporter to deal with STL files. Sketchup is nice, and I’m sure I’ll end up using it more as time goes on, but it’s not the end of my 3D quest.

Blender
Urgh… I’ve made no progress with Blender. Haven’t even tried. I may just wait until we do a Blender class at Milwaukee Makerspace.

3DTin and Tinkercad
I talked about 3DTin last time. I haven’t used it since, but it still seems like a great way for kids to get into 3D modeling. As for Tinkercad, it seems like a more advanced version of 3DTin. Make: Live covered Tinkercad in Episode 17 if you want to check it out.

Inkscape
Say what!? Inkscape is a 2D drawing application. I’m still using it. I’ll often open vector files (SVG) and export them to DXF files and then extrude those to 3D files. Here’s a great Inkscape to OpenSCAD dxf tutorial that explains it all.

OpenSCAD
I’m still just barely using OpenSCAD, mainly in conjunction with Inkscape as mentioned above. I need to dig in a bit deeper, as time allows.

So what else is there? Well, I found Pleasant3D, which isn’t exactly modeling software, but it’s what ReplicatorG might look like if it were a full-on Mac OS X application. I’ve found it useful on a few occasions.

The other one worth mentioning is MeshLab, which may have some uses when it comes to converting or transforming files. I haven’t created anything with it yet, but it sure looks impressive.

So that’s my 3D modeling software update… Anything new to report from your desktop?