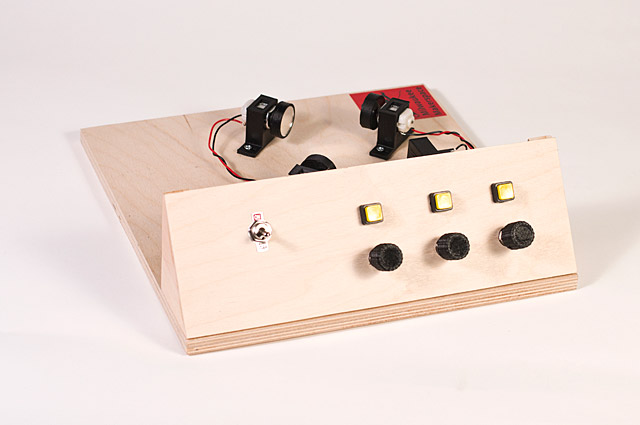 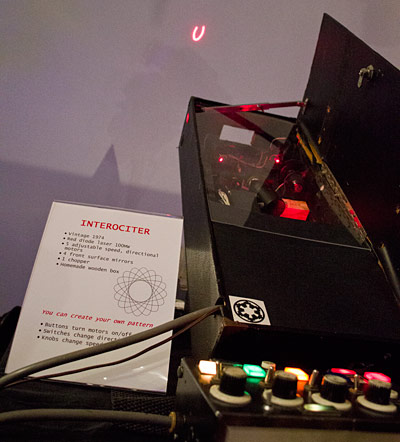 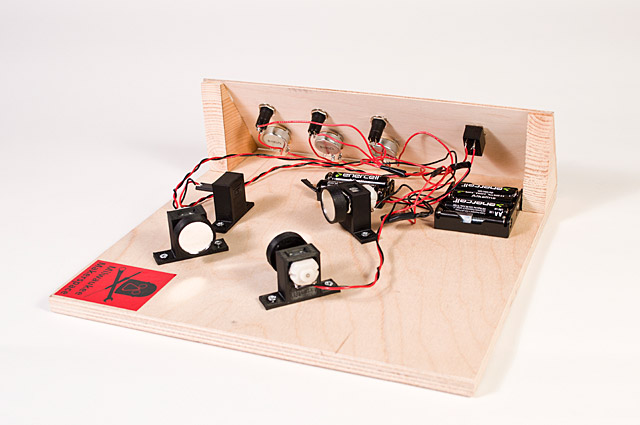 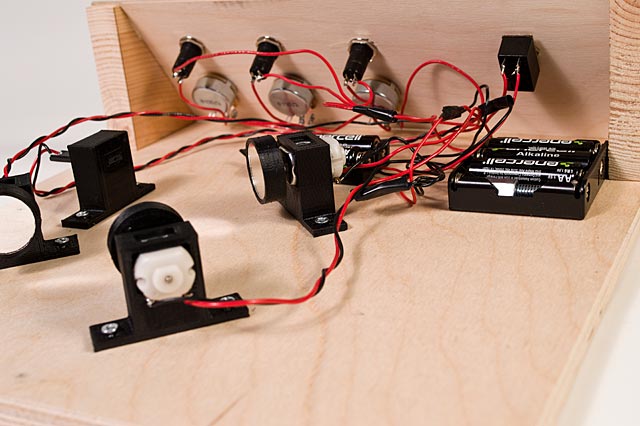 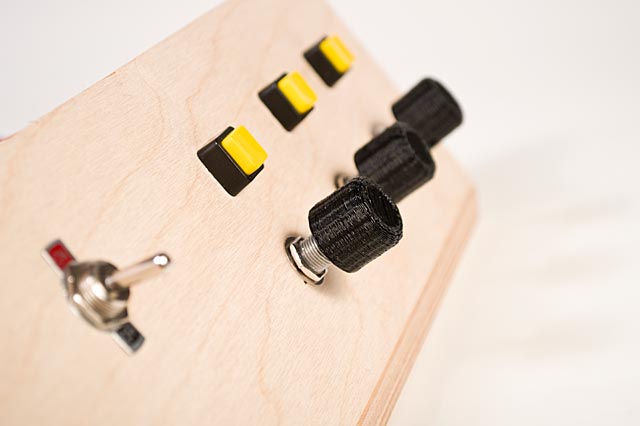 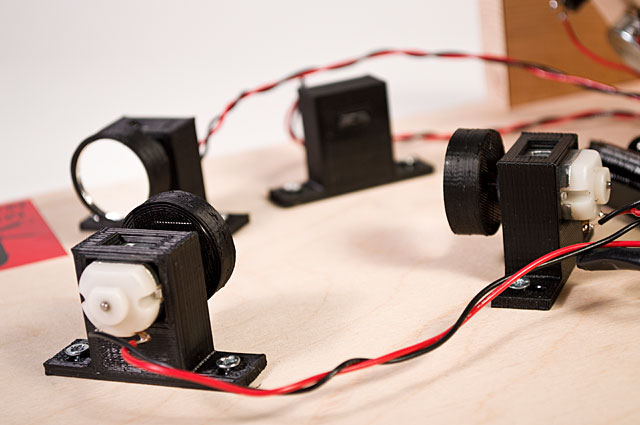 This is awesome! Did you design in the wobble of the mirrors by printing the mirror mounts with a certain angle?

The best thing about 3D printing them was that I didn’t need to introduce anything to make them non-precision, it just sort of happened. I probably printed more than 6 mirror mounts and ended up selecting the 3 that worked the best.

Hi Pete, I’m trying my best to imagine the whole thing working and what I can’t figure out from what you describe and by looking at the photos is how are the mirrors arranged. I understand it can work with one, two or the three mirrors rotating but I can’t figure out the placement. Could you make a quick sketch that just outlines the path the laser follows through the mirror setup?

Alex, see if this image helps to explain things: http://rasterweb.net/raster/wp-content/uploads/2013/02/laserpath.jpg

Thanks Pete! I’ll get started on my prototype right away!

Alex, awesome! Let me know if you post any photos or info on it.

nice knobs!! :D I love this project, too. Awesome!

That’s very cool! The path diagram really clarifies how it works – I might just have to give it a try.

Hey, regarding how you mounted the mirrors… did you mount them onto a flat and perpendicular surface that attaches to the motor shaft, or is there any angle to them? I think I’m way overdoing it on having an angle , and by the time the beam gets to the third laser, the “spray pattern” is so big that it’s missing it most of the time. I’m probably answering my own question.

Steve, Luckily my 3D printer is not precise, so a gentle angle is introduced by default. I printed maybe 7 mirror holders and picked the best ones (with angles) out of the bunch. Too much wobble will mean bigger mirrors, which is actually what I’d like to do when I upgrade this one…

Ok. That’s pretty much how I would describe my 3d printer too, so I’ll undo what I’ve done to add the angle (puffy foam mounting tape) and see how it goes. Thanks! Seems like the smaller mirrors are ok for the first two legs of the trip, but by the time it gets to the third leg, things are getting crazy. My office is right down the street from a fabric/craft store, and I did see larger mirrors, so if I can’t get the light path to tighten up, a larger mirror should do the trick.

it lives! http://www.youtube.com/watch?v=B71f9m_MZGI&list=UUATIgSjWM4WXxYdM6nPoJjw&index=1&feature=plcp Mine is arduino driven for motor speeds via PWM pins. Although I did try dumping more voltage into the motors I found in a surplus store beyond the 5V that the PWM pins can output, and they ran a *lot* faster. So, I’m thinking about using transistors to let the arduino control a 12V power supply for the motors. i’ve never done that before, so that’s kind of why I want to do it. Not sure how it will affect the laser light show, but it doesn’t even matter. :)

Nicely made, especially the printed parts. One suggestion – add a circuit to pulse the laser and you’ll get a whole new range of patterns. A simple 555 based PWM circuit with variable frequency and duty cycle would work well.

Yes, excellent suggestion, I was just looking at some other projects in the similar vein on youtube, and pulsing the beam is on the todo list for tonight. I’ve also been really itching to do stuff with steppers, so I bought a couple Easy Drivers from sparkfun and have been messing around with them since it’s so easy that way, and then I saw that some of the higher end laser light show boxes use an XY stepper scanning technique… so I may go that a try too. I just picked up some TIP120 darlington transistors, so I’ll use them to let the arduino run the motors at 9-12 volts… should be cool!

Ultimately, I think I’m going to try to migrate all of the PWM over to a texas instruments TLC5940 chip, which is a 16 channel PWM controller. It takes 4 pins of input for 16 PWM out. pretty cool. I recently used one for another fun project and they’re surprisingly easy to interface with. If I can get all the code to fit, even minifying the project onto an ATTiny85 would be icing on the cake. MIT’s High-low tech group has what looks to be an excellent tutorial on that topic, so giving that a try is on my list after beam pulsing and adding the transistors.

We have two young kids, 4 and 1 years old, and I’ve been basically out of commission for most of the last year… my desire to make stuff has been building up this whole time. So, yay.

Noob here…any chance you could give a quick sketch of the wiring layout? Want to build one with my son and I’ve not soldered up potentiometers before or messed with “LASERS” before.
Thanks!

Hi Bill, yeah, I’ll try to work up a wiring diagram. It’s very simple though. The toggle switch is just on/off for the laser itself, wire to 2 AA batteries. For the 3 motors, they each have a button for on/off, and then the potentiometer are wired to each motor to control the speed. The 3 motors all run from the same 3 AA battery pack.

But if that’s confusing, I can see how a diagram might be more useful. :)

This is really neat. Anyone know of any other resources/tutorials for relatively easy projects like this?

jc, it all depends what you are looking for. Make Magazine and their blog at http://blog.makezine.com/ are great resources for project ideas, and range from simple to very complex. Instructables and DIY.org and two other places to look for easy to do projects.