Building upon the work of others is something we all do, and this is one more project that does that. Back when I first started to get into Arduinos, I found this post about an articulated plotting robot. I bookmarked the post and added it to my “TO DO” list.

Along the way I built the Friday Night Drawbot (and a second one!) and really got into the idea of melding art and technology to create art robots.

The Milwaukee Makerspace was invited to show our stuff at Bucketworks for Spring Gallery Night 2012… so the Arc-O-Matic was born. 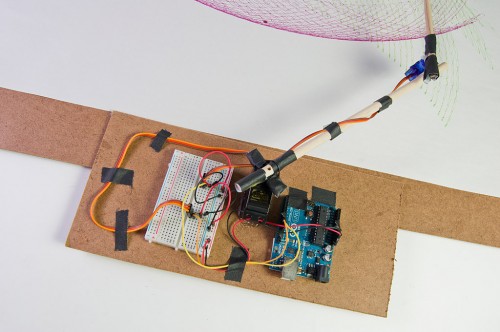 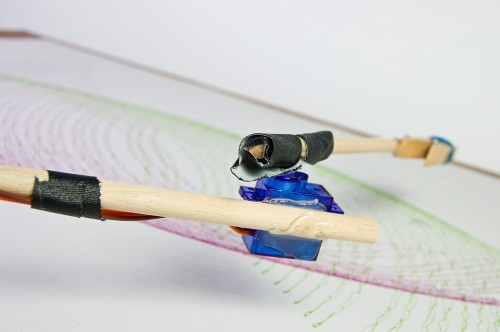 For holding the Sharpie, I ended up using a clothespin (C47) which I had filed out to make wide enough to hold a Sharpie. I also added a rubber band to hold things a bit more securely.

Oh, I also had to make sure the servos were at the midway point (pointed straight out at 90 degrees) before gluing everything in place. (Luckily, it’s fairly easy to heat up the glue and take things apart. I use a Heaterizer XL-3000 from SparkFun for that.) 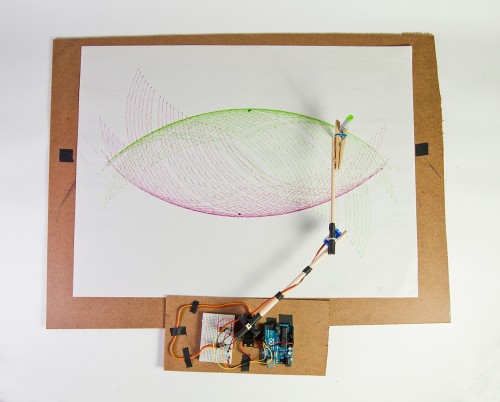 So to make it all work we start by putting an 18″x24″ sheet of paper down with a few pieces of tape, and then insert an Ultra Fine Point Sharpie Marker into the C47 (clothespin) and power it up. It then sweeps to the right, and starts drawing arcs. It’ll do this while gradually moving to the left side of the paper. When it’s done, you can switch the marker and run in again, or shift the paper a bit, or flip it upside down. At this point it’s all up to you. 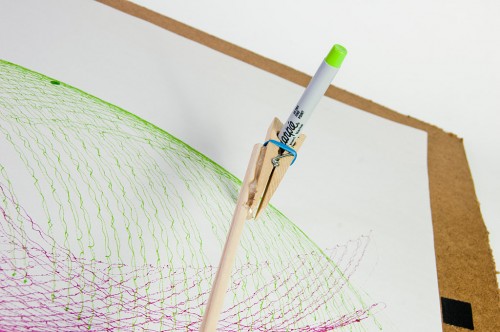 Part of what I like about these art robots is the way the interaction between the machine and the human takes place. The person sort of acts as a “helper” for much of the process, but none of it could happen without the person. The person loads the paper, loads the pen, and starts it all. The machine does the actual drawing, but couldn’t do any of it without human interaction. It’s a symbiotic relationship, which sounds weird, but that’s how I see it. 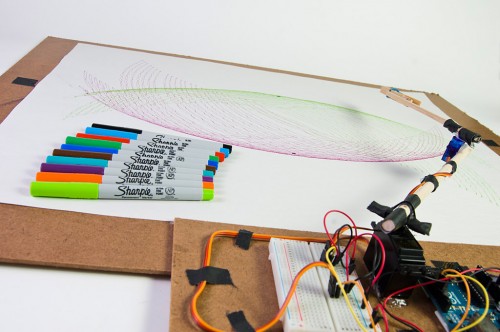 A rainbow of choices

Because of the lack of precision in the build and the parts used, the lines are not even close to perfect. They are shaky and jerky and uneven, which is even more fun when you consider it’s a machine doing it. We’re so used to machines being able to repeat things over and over the exact same way every time that seeing a machine (creating art) that can’t draw a line on top of another line exactly the same is interesting. That’s part of the random chaos I like about it. 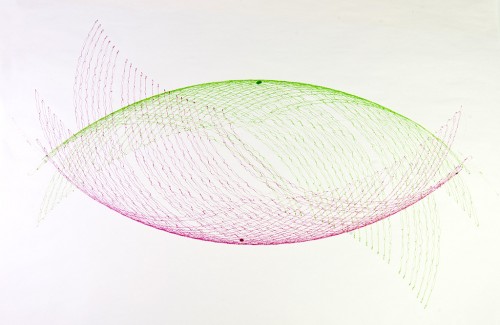 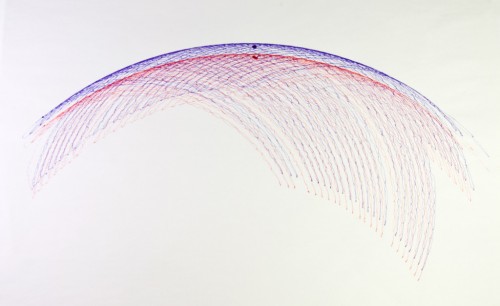 As far as the programming, that took much longer than the actual building of the piece. The building process was probably an hour or so, but getting code I was happy with probably took 5 times as long. (In my defense, I’m not that great with math or angles.) After about 6 attempts at producing code, I ended up going back to my second attempt and tweaking it from there to get the results you see above. It’s not great, but I like it, and just like the Friday Night Drawbot, once it’s built, you can spend the rest of your time programming and re-programming it and always come up with something different. Physical computing is pretty awesome like that.

Need a code sample? Look at this gist.

The Arc-O-Matic also got a mention on the Make Blog.