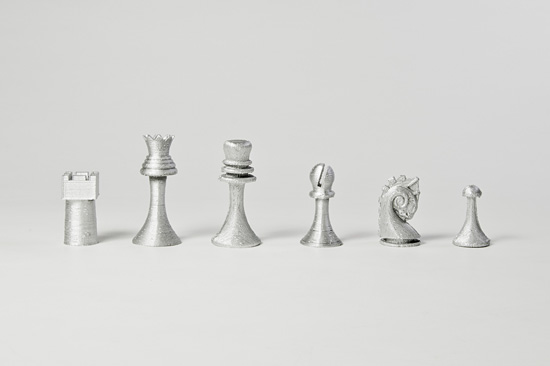 The Duchamp Chess Set I made was part of a project that Bryan Cera and Scott Kildall hatched to recreate the lost hand-carved chess set that Marcel Duchamp created.

To be honest, it’s been a while since I’ve taken an art history class, so I did a bit of homework on Marcel Duchamp and reacquainted myself with his work. My favorite piece is Fountain, which I remember well from my art studies, and yes, you can grab the file from Thingiverse and 3D print your own version.

(Note that Rob Myers, who commissioned the 3D model of the urinal, has a few thoughts on Readymades. I mention this because Bryan and Scott have chosen the term “Readymakes”, a play on Duchamp’s Readymade idea.) 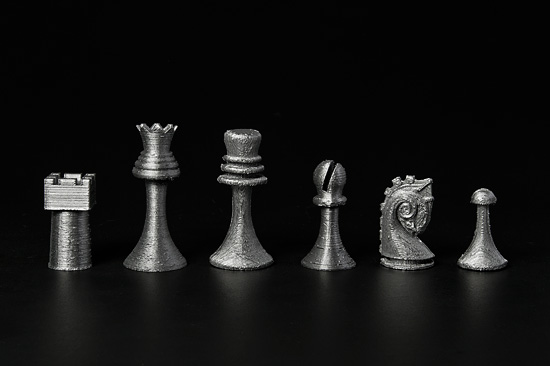 As for my contribution to the project, Bryan invited me to print my own set, and I did, but I chose to split each piece in half and reassemble them after printing. I found this to be the cleanest method of getting quality prints on my specific 3D Printer. I also gave mine a coating of metallic paint, which transformed them from simple plastic-looking piece into metallic-looking pieces, or at least, metallic-plastic-looking pieces.

Another interesting tidbit is that Duchamp helped define the development of the Plastic Arts. The Plastic Arts are not exactly about “plastic”. (The term “plastic” in this sense refers to materials that can be carved or shaped, such as stone, wood, concrete, or metal. Another definition of “plastic art” defines it as characterized by modeling and three-dimensional art, which is also fitting.) I found it amusing that we were using actual plastic to create the chess pieces, and then further amusing that mine were coated with metallic paint. 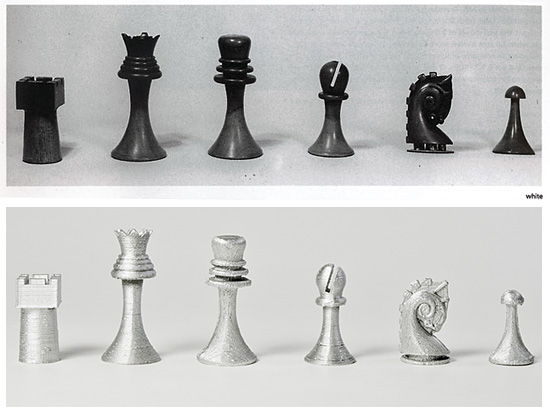 I had one last challenge when my set was done… to document it. I tried to replicate the shot of Duchamp’s set, but it could not be done… at least not in less than an hour. If you compare the two, you’ll notice that the angle of the knight and pawn just don’t match up. When I did get them to match up, the other pieces didn’t match up. The angles just didn’t cooperate. I started to wonder if Duchamp’s set was not placed on a flat surface, or if there was some other reason the perspective didn’t quite match. In the end it didn’t matter too much, because art is unique, even when it’s a copy.

The Duchamp Chess Set was also mentioned in a post by Scott Killdall: Materiality of the Readymake and in the Instructable Readymake: Duchamp Chess Pieces (3D Recreations from Photographs).