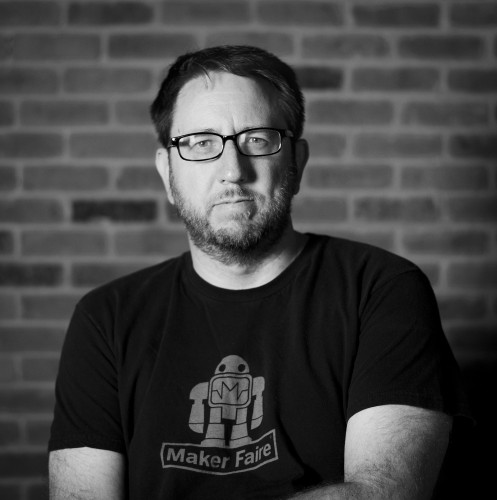 Greetings. My name is Pete Prodoehl. I am the publisher behind RasterWeb! which started in August of 1997.

On a good day I like to consider myself a serial enthusiast, in that I get involved in a lot of different things. Some I tend to stick with, some I move on from, but I’m usually interested in exploring and learning new things.

I like to think that RasterWeb! is about art, life, and technology, though not necessarily in that order.

As far as this Internet stuff, I helped start the thing we now know as blogs/weblogs back in 1997, got involved in RSS and later Atom, helped kick-start podcasting in 2004, and then got involved in videoblogging in 2005… In more recent years I’ve been exploring open source hardware, Arduino & Raspberry Pi hacking, 3D printing, laser cutting, digital fabrication, and just generally making things. Check out the Project pages for some of the things I’ve made. I’m also a former Board Member of Milwaukee Makerspace, and was one of the organizers of Maker Faire Milwaukee from 2015 to 2019.

I’ve been involved in personal publishing since the mid-1980s and don’t plan on stopping any time soon. I prefer free, open, and cheap technologies and I am not a fan of vendor lock-in.

I like macOS, Linux, and most *nix-based operating systems. I’m really not a huge fan of Windows, though I’ll admit Windows 10 is the least terrible version of Windows I’ve used. I’ve been using Apple computers since 1980. Despite that I try really hard not to be a “fanboy” of Apple, and I tend to criticize much of what they do, especially in the last 10 years. I don’t run the “latest and greatest” because I care more about getting things done than being “wowed” by new technology.

I’ve served as a technology manager, and I’ll be the first to admit that technology often sucks, and creates more problems than it solves.

I live in Milwaukee, Wisconsin. I (mostly) like it here. The winters are cold and unbearable and the summers are hot and unbearable. I don’t travel as much as I’d like to, though that’s been improving in recent years with trips to England and Scotland. (Iceland was put on hold by COVID-19.) I also spend time in Maryland.

If you think you once knew me, or met me, or do know me, or have a question or comment, or whatever, contact me. (If you’d like me to come to your event, or party, or rummage sale, just ask.)

That’s it for now!