I made a Wire Holder. It’s like a pen holder/pencil cup but for wire of a specific length. It’s difficult to tip it over, especially if you use a high infill. Just visit PrusaPrinters to grab the files for the Wire Holder. (There’s an STL file and an OpenSCAD file available.) 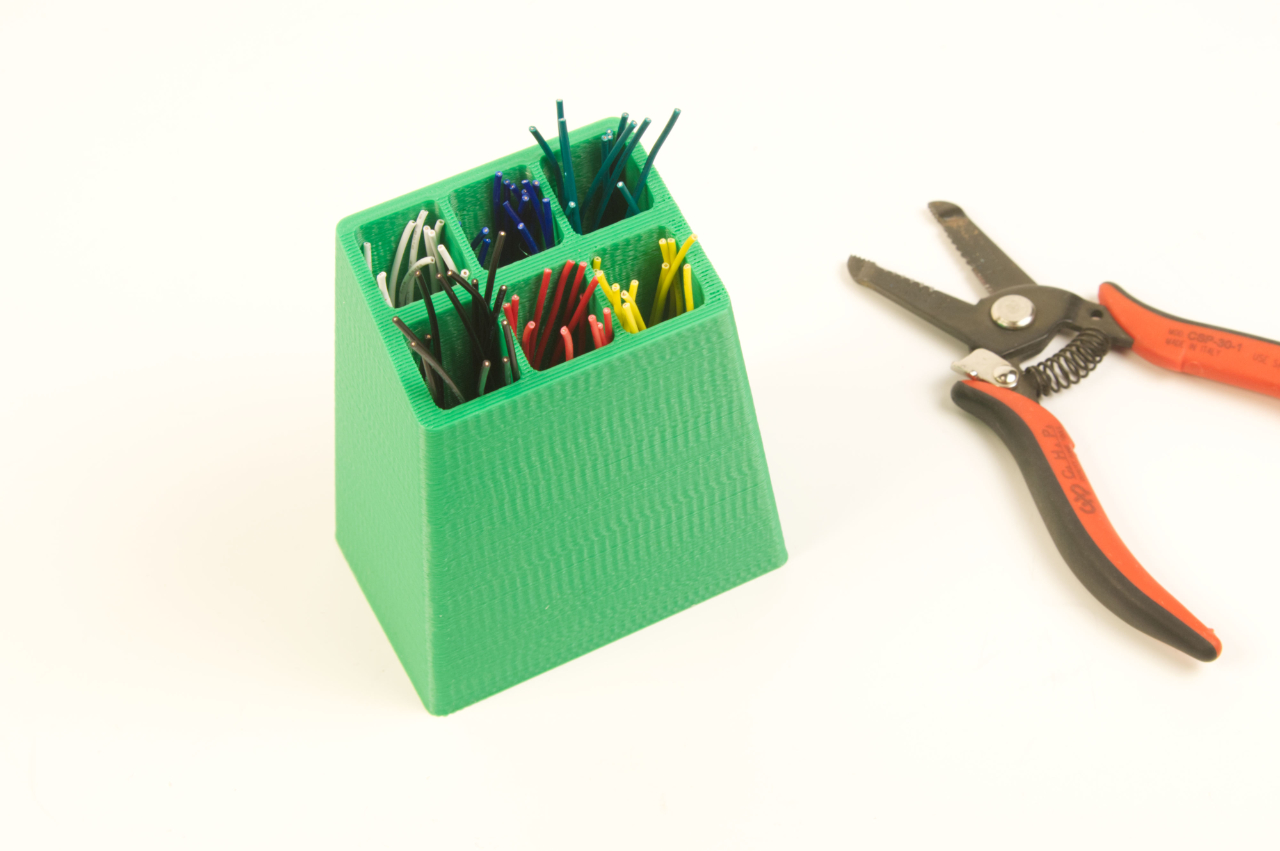 I printed this on my old Monoprice Maker Select Plus, which explains the (poor) print quality. If I had printed it on the Prusa, I’m sure it would look much better. It doesn’t really need to look good though… it works, that’s what matters. (The Prusa was busy printing something more important at the time.) 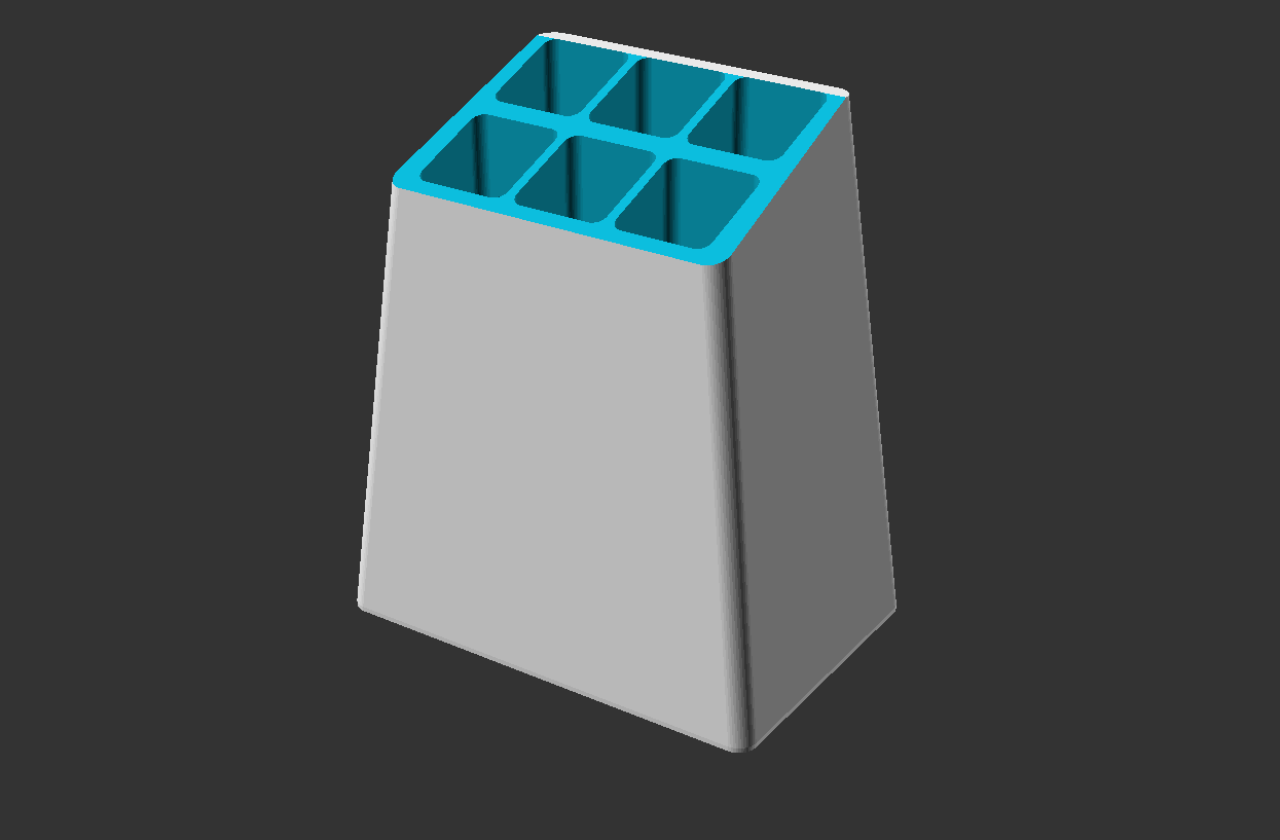 Also, yes, I know… but this is for wire of a specific length. 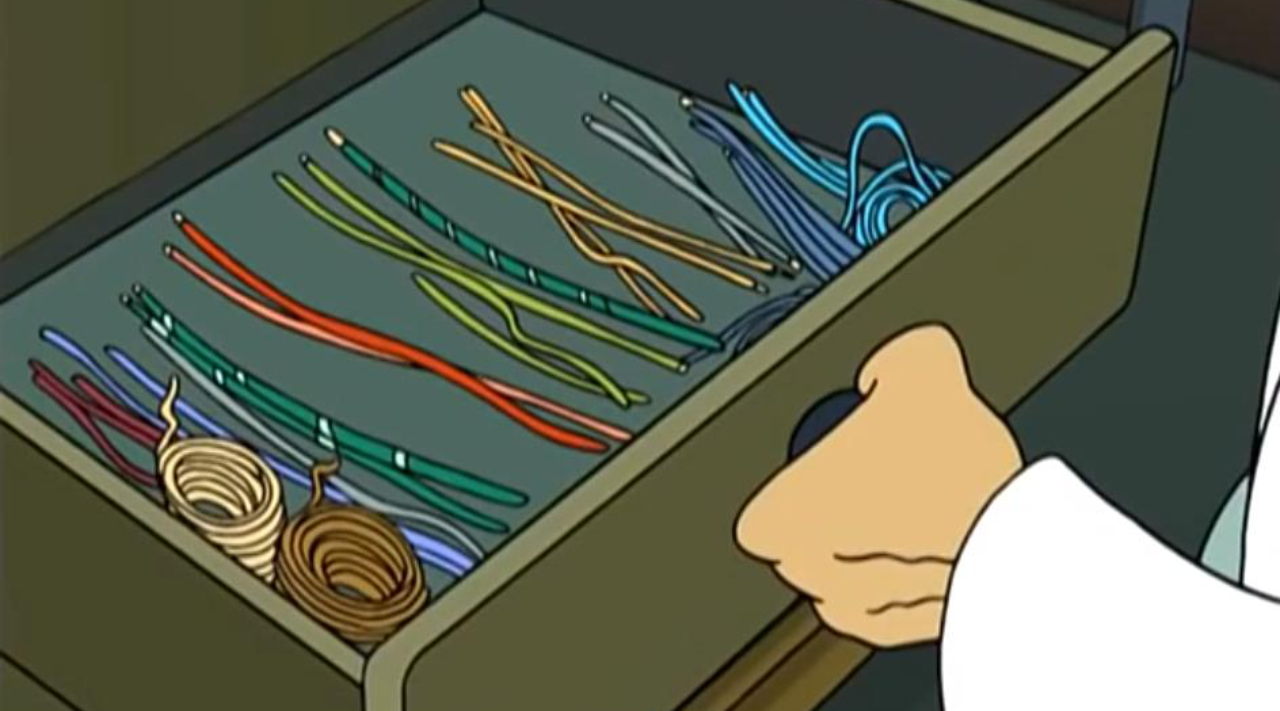 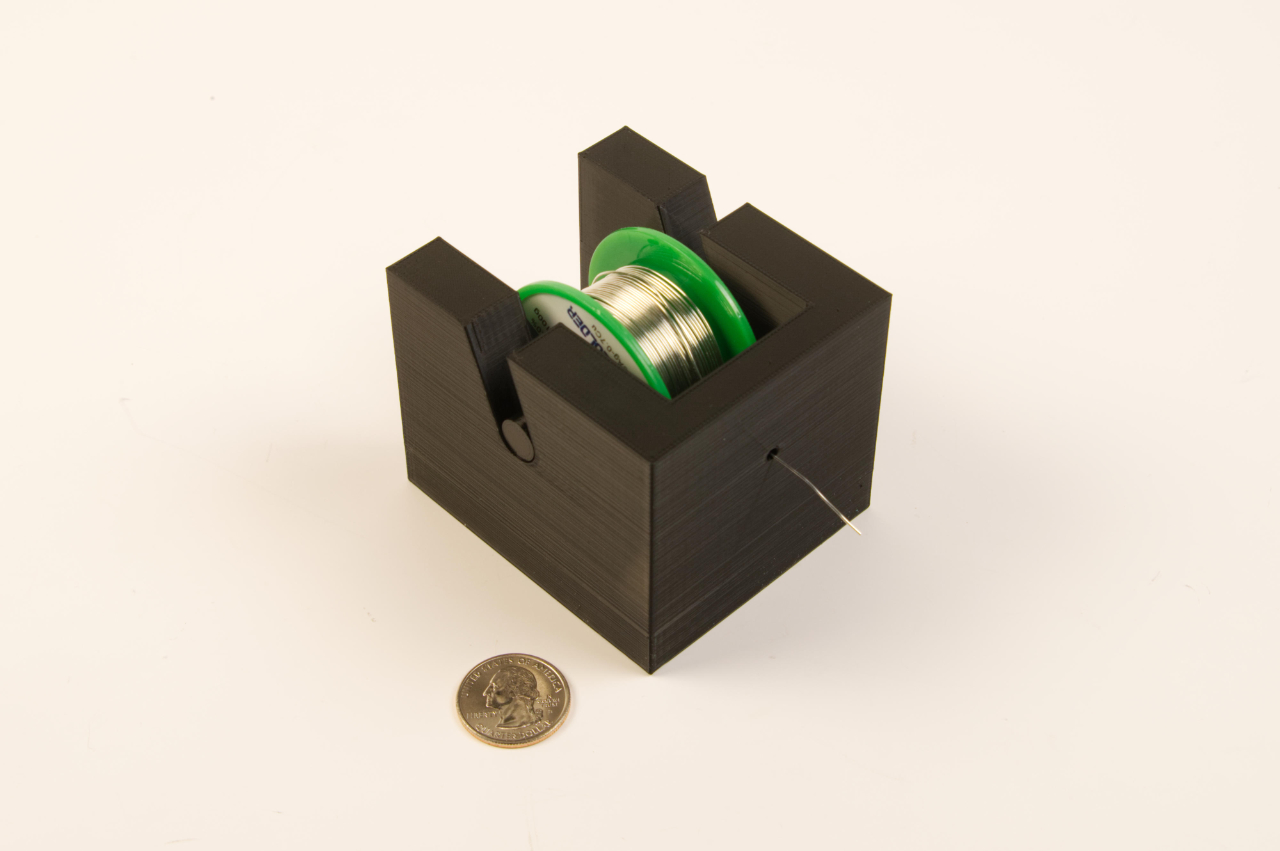 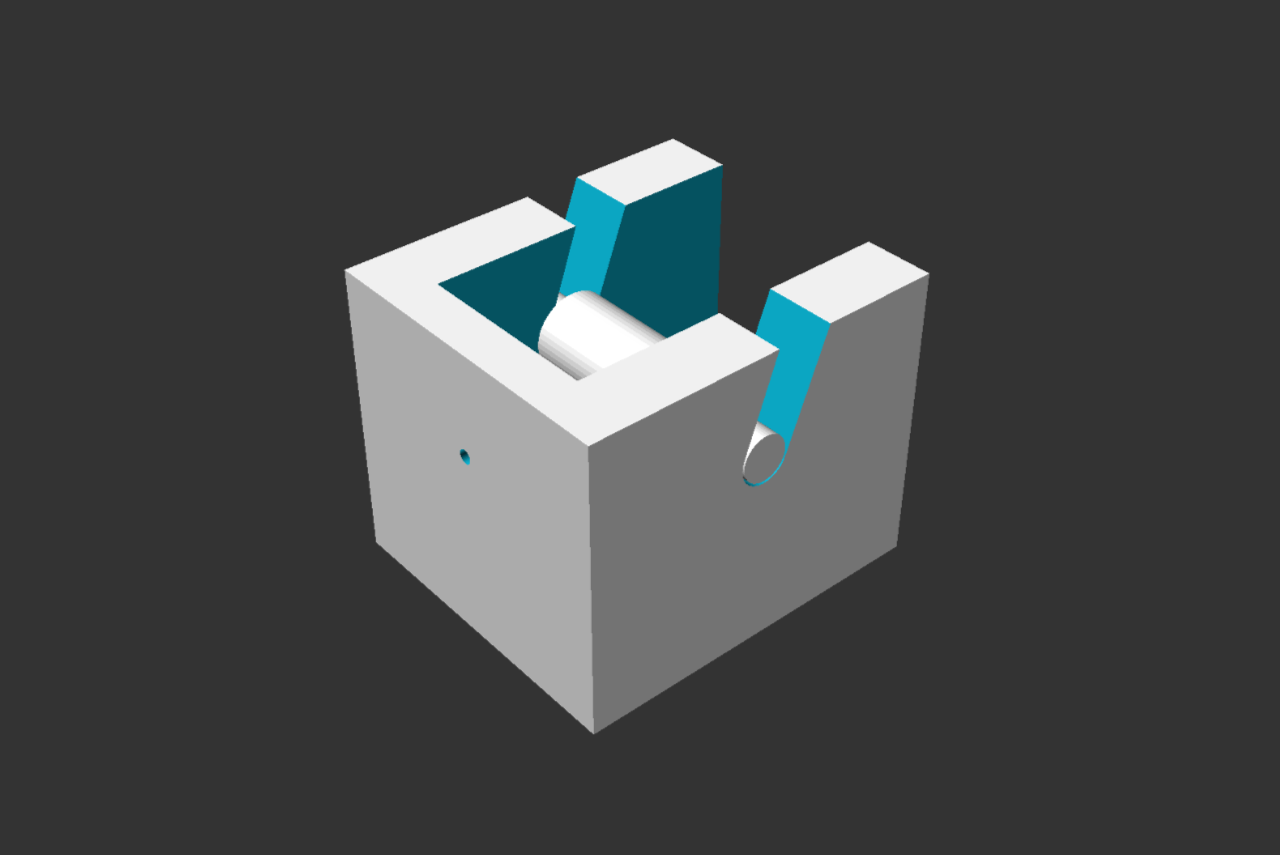 This is a chonky spool holder for sure! I really just designed this in about 10 minutes and then hit print before going to bed. It’s a bit more chunky than I expected but I don’t mind much. It’s also not perfect, but it’ll do for now. If I didn’t make this I would have kept using the old crappy one that I’d been using for years. 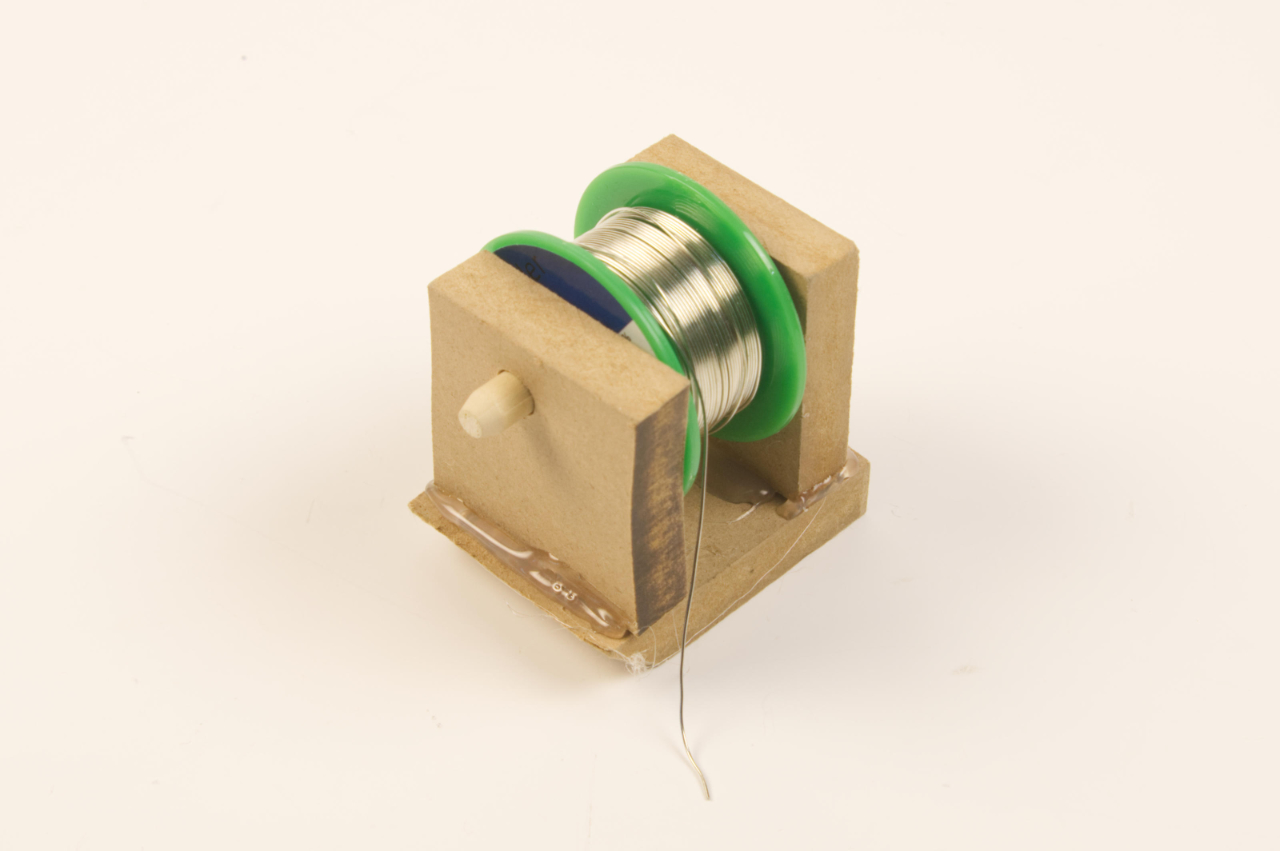 Here’s what I replaced, which I call the “crappy spool holder” because it’s make from scrap, and I slapped it together in a few minutes, and I’ve had to hot glue it back together after it broke. (I still hate MDF, BTW.)

Print your own! Grab the files from Printables.com 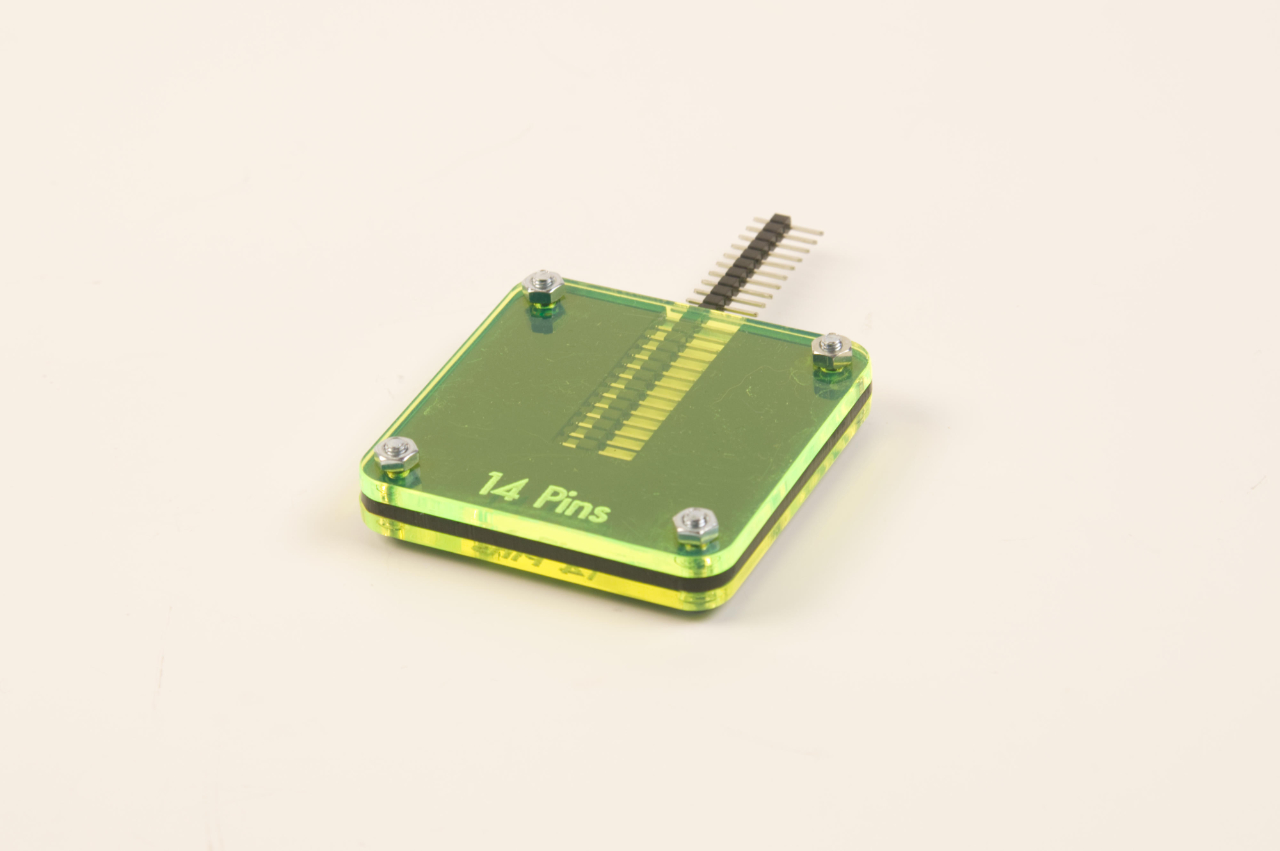 Things have been busy lately. I’ve been building a lot of electronic devices and since there’s soldering and assembly involved I’ve been looking seriously at my tools. In some cases I’ve bought new (and better) tools, and in some cases I’ve looked at making my own tools. Here’s a “Header Pin Snapper” that makes it easy to get a 14 pin header from a longer strip. 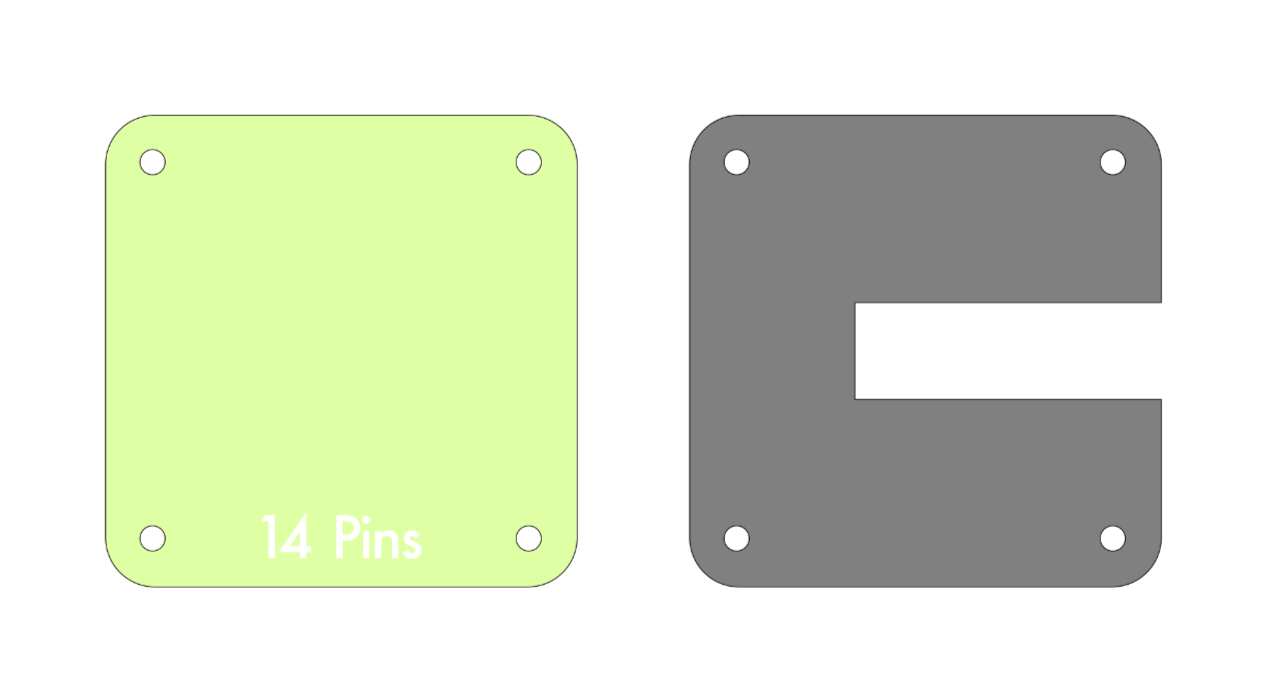 I used to use a diagonal cutter to snip the pins to length, and that works fine if you do a few, but if you need to do a bunch a tool is a quick way to do it. I’m not the first to make one of these, you can also check out the Header Snapper – WHSN, the BlueBreaker, this Pin Header Snapping Tool, and a parametric pin header snap fixture, among many others… including the OctoSnap! 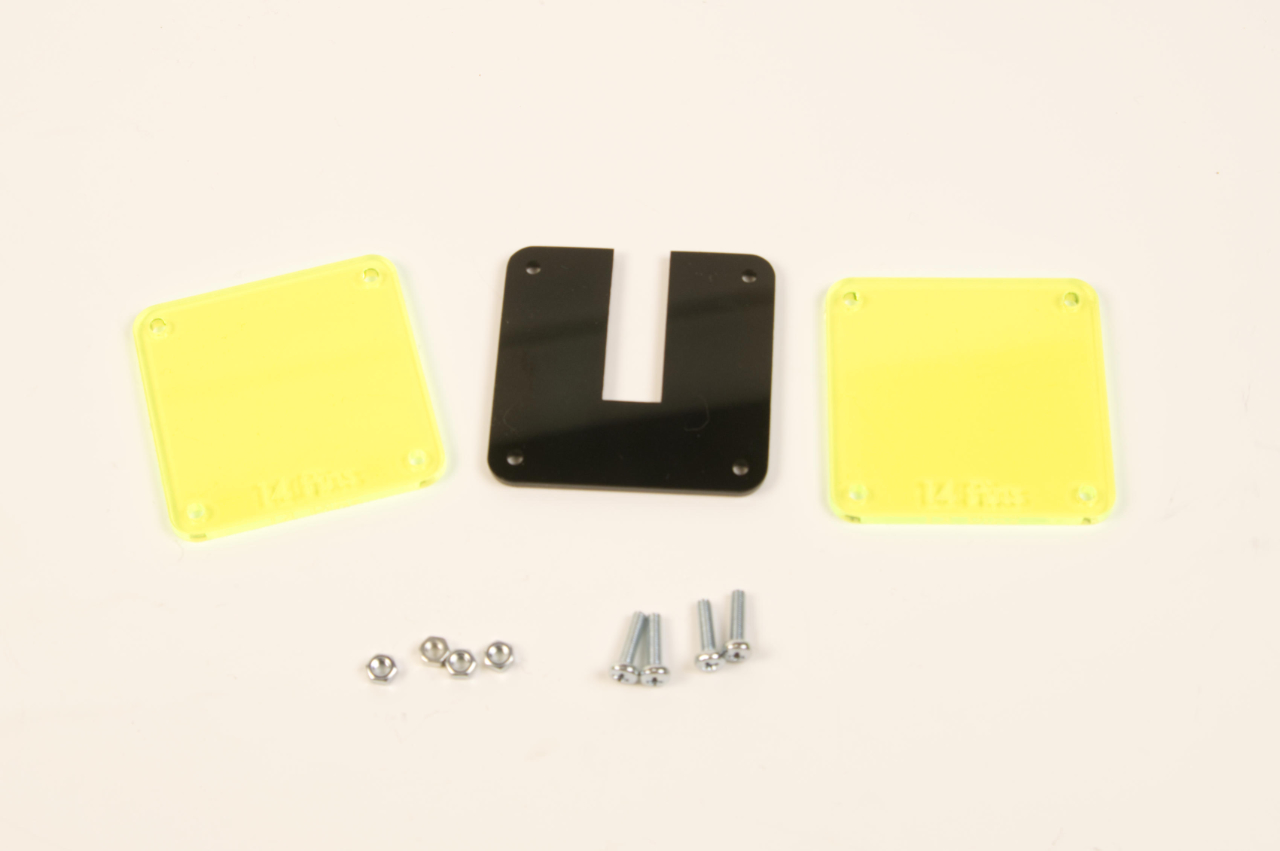 So I spent a few minutes making this simple device that can snap pin headers to a length of 14 pins. Exactly what I need, and it works fast. Working fast is often better than working slow. I didn’t need an adjustable one, or a customizable one, so this one fulfills my needs, but might not be useful for others.

It’s just three pieces of 3mm thick acrylic, and four 3mm x 12mm bolts along with four 3mm hex nuts. I’ve got plenty of small scraps of acrylic lying around so made two just in case I misplace one. 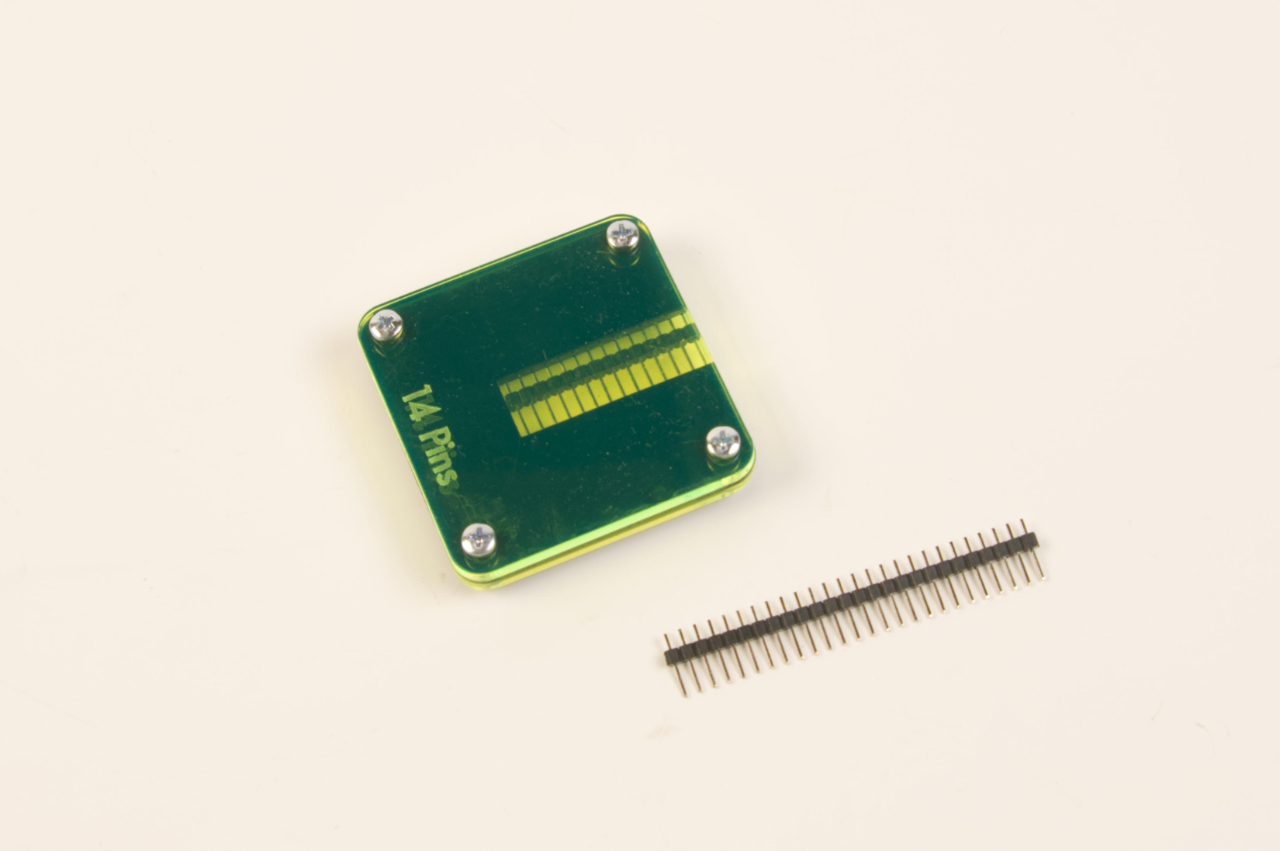 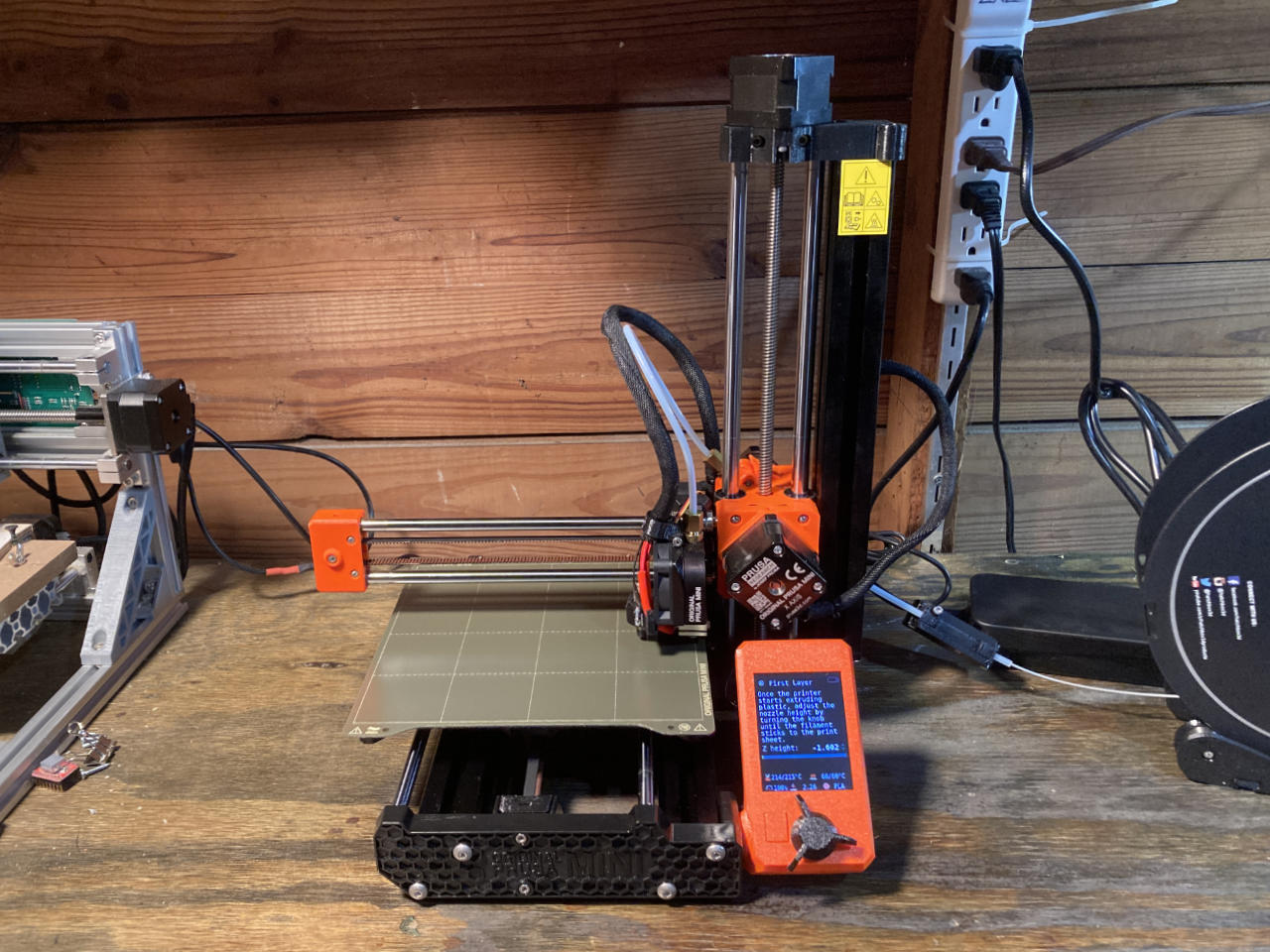 This is not really a review of the Prusa MINI+ 3D Printer. There are plenty of full reviews out there. What this is though is a post about my own experience with the Prusa MINI+, at least the first week with it.

First, some background. I am not new to 3D printing. My first post about 3D printing was in 2011. (See them all!) I got my first RepRap working in 2012, and helped start the Milwaukee 3D Printing Meetup the same year. I was using printers at Milwaukee Makerspace, UWM, and other places around town (including at work) and in 2017 I replaced my ageing RepRap with a Monoprice Maker Select Plus. So I went about five years between printers, which is fitting, because it’s five years later and I just got another printer. (I’m not counting the Creality machine I gave to my daughter or the Maker Select v2 I just gave away to someone I know.) So yeah, I get 3D printing. ;) 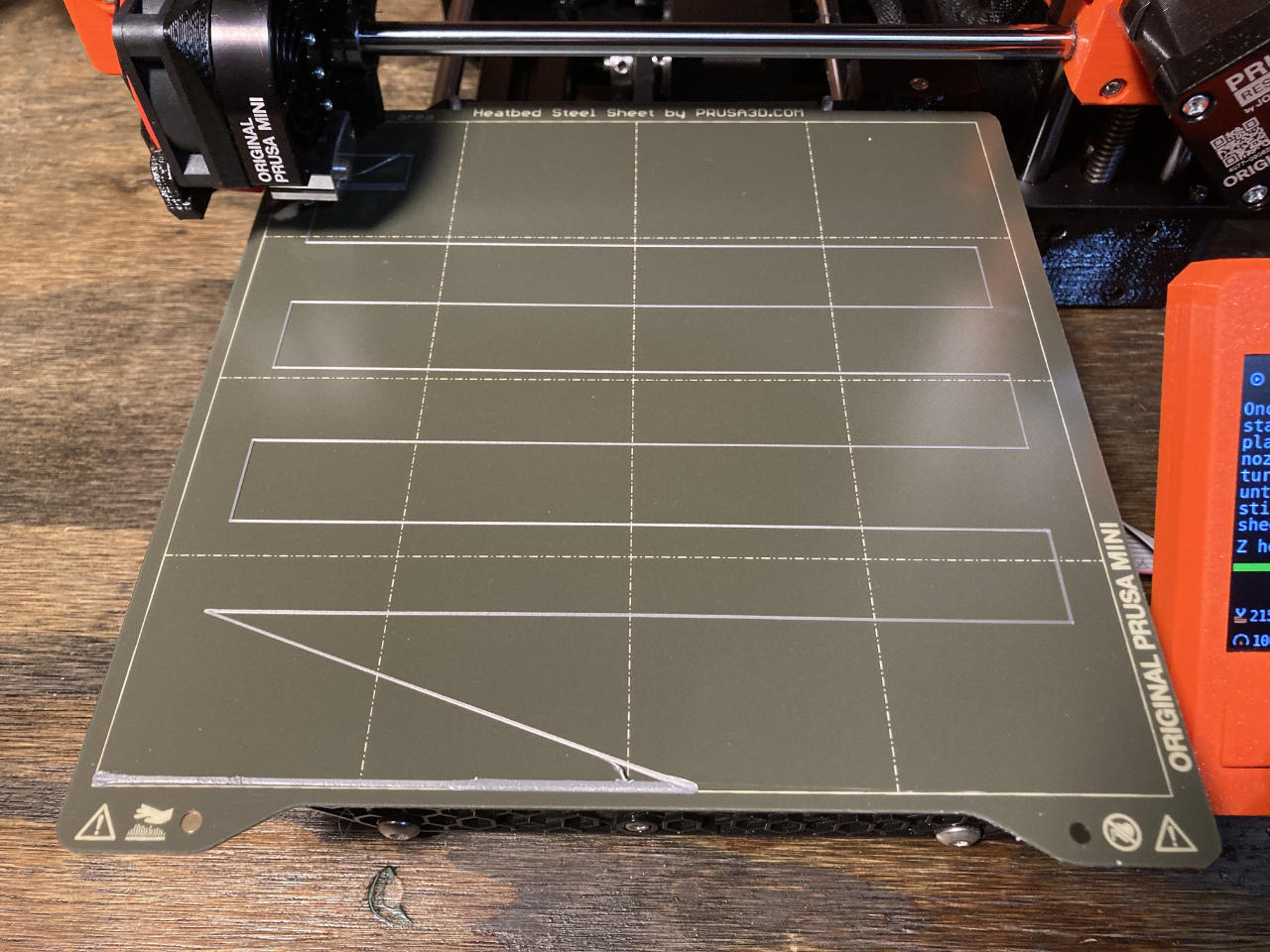 So while the Maker Select Plus served me well (after a few upgrades) I wanted something a bit better in the quality department. Years ago I spec’d a Prusa i3 at work to replace an ageing (and often broken) MakerBot and I loved that machine. I basically told everyone I knew to get a Prusa if they could. (They got a whole bunch of them at Milwaukee Makerspace.) The experience was top notch for someone coming from the old RepRap/Pronterface world. Alas, I left that job and left the Prusa behind.

Print quality from the Maker Select Plus was pretty good, but I’m hoping for much better quality from the MINI. One important thing to note is that while the MINI has a smaller bed, it can probably print more reliably across the entire bed. I’ve found that cheap printer with large beds don’t always excel at using the entire bed. Part of this is probably leveling. While I’ve been a gruff old veteran who says “Argh! All ya need is a sheet of paper and some patience to level things!” the probing and leveling system of the Prusa is great. (Yes, I know I could add it to the MSP, and upgrade the firmware to support it and… at this point I really just need to print. 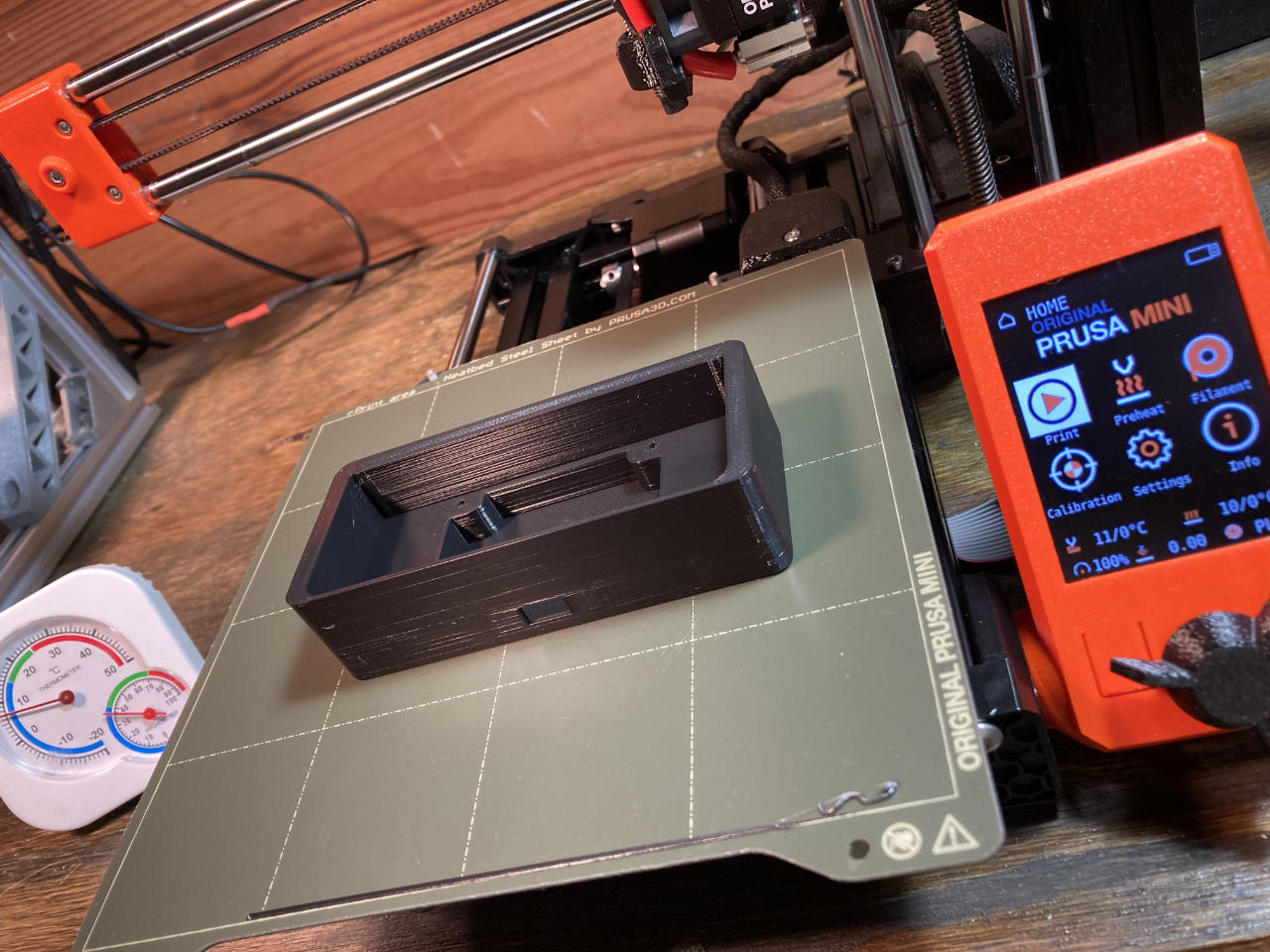 In 2021 I started having to print more quality items that were for sale, and sometimes it was difficult to keep up and get good quality prints. I started eyeing the Prusa MINI again. I finally decided to grab one (after selling some other equipment I didn’t need) and it arrived in less than four weeks, which sounds like a long time but I was expecting 6+ weeks. So that’s a win. 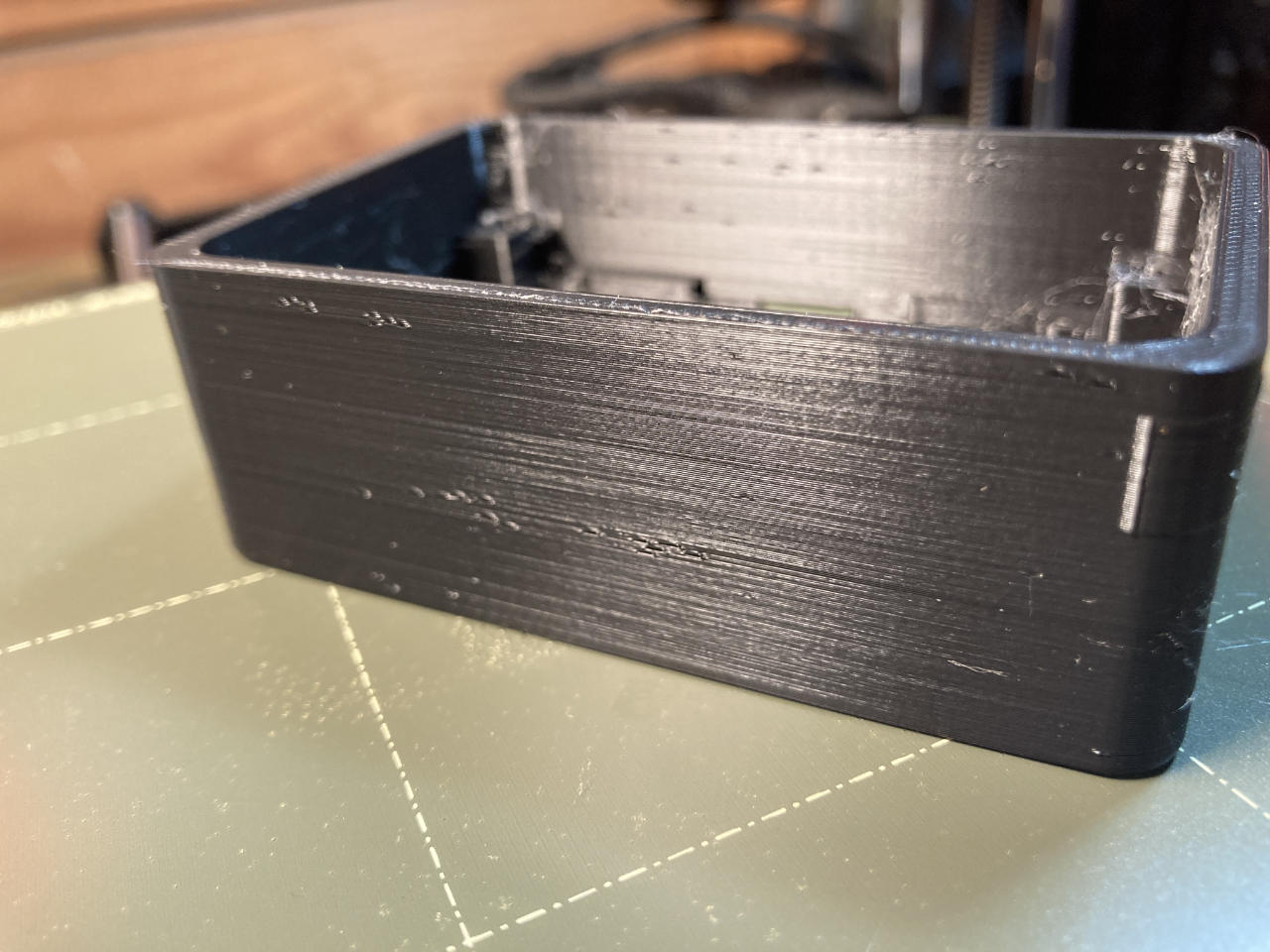 As for the actual experience, here we go. Assembling it was a bit of a pain. I’ve put together two Ender 3 printers and it was very simple. The MINI assembly (while not many steps) kind of sucks. Maybe because I expect a certain level of Prusa experience. Luckily you should only have to do it once. (To be clear, I got the assembled model, so it was just bolting the two halves together, plugging in and routing all the wires, and that was it. Still a painful experience.) Remember how I said “you should only have to do it once”? Well…

After assembly the setup and calibration was great. Excellent experience! The machine walks you through the process very smoothly. I then did a test print found on the included USB drive and it looked good. (I used some Hatchbox filament, not the included Prusament.) So yeah, cool! From opening the box to getting a first print was a little over an hour in my freezing cold basement. I called it a night. 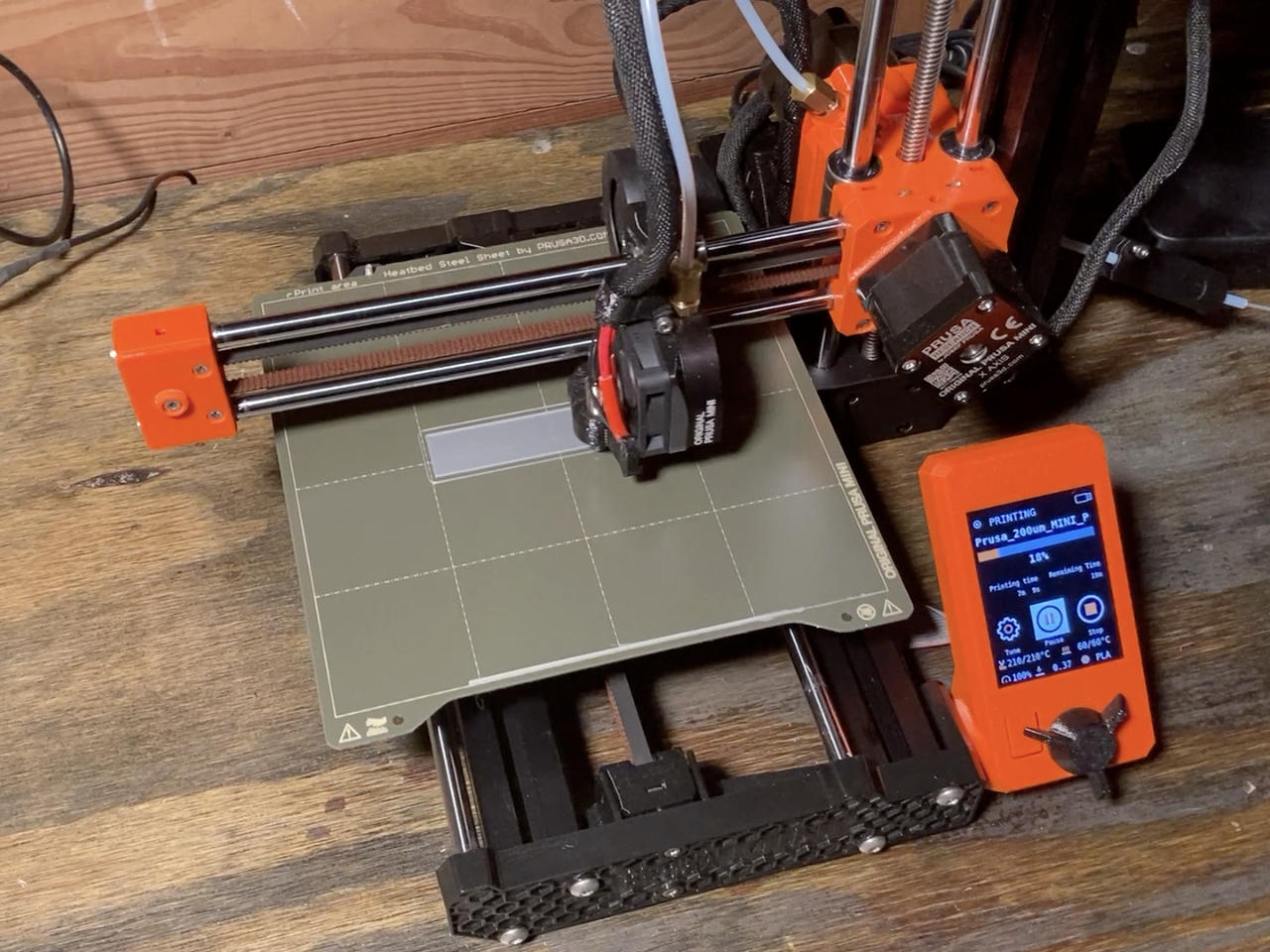 The next night I went down with a file I sliced with PrusaSlicer (which is a really nice piece of software) and get ready to print it but… ERROR! It showed an error on the screen. You can then look up the error code online or scan the QR code with your mobile. Seems the hotend thermistor was having issues. I checked on it, including opening up the enclosure to check the wiring, thinking maybe I didn’t secure things. Again, the wiring is a pain. Ugh. Painful. But at least I was getting used to it. So here’s the deal… It was cold in my basement, and this printer is so smart (ha!) it thought the thermistor had failed because, well… if the reading is that low, something is wrong. The only thing wrong was that I have a basement in Wisconsin. I ended up pointing a space heater at the printer until the thermistor read warm enough to pass the check. (It was honestly just a few degrees, but still.)

Okay, that was the second night. Not great, but a little annoying. I get why they do it, but hey, it’s winter in Wisconsin. I know how cold my basement is. And yes, the cold may affect the print quality. I know that. 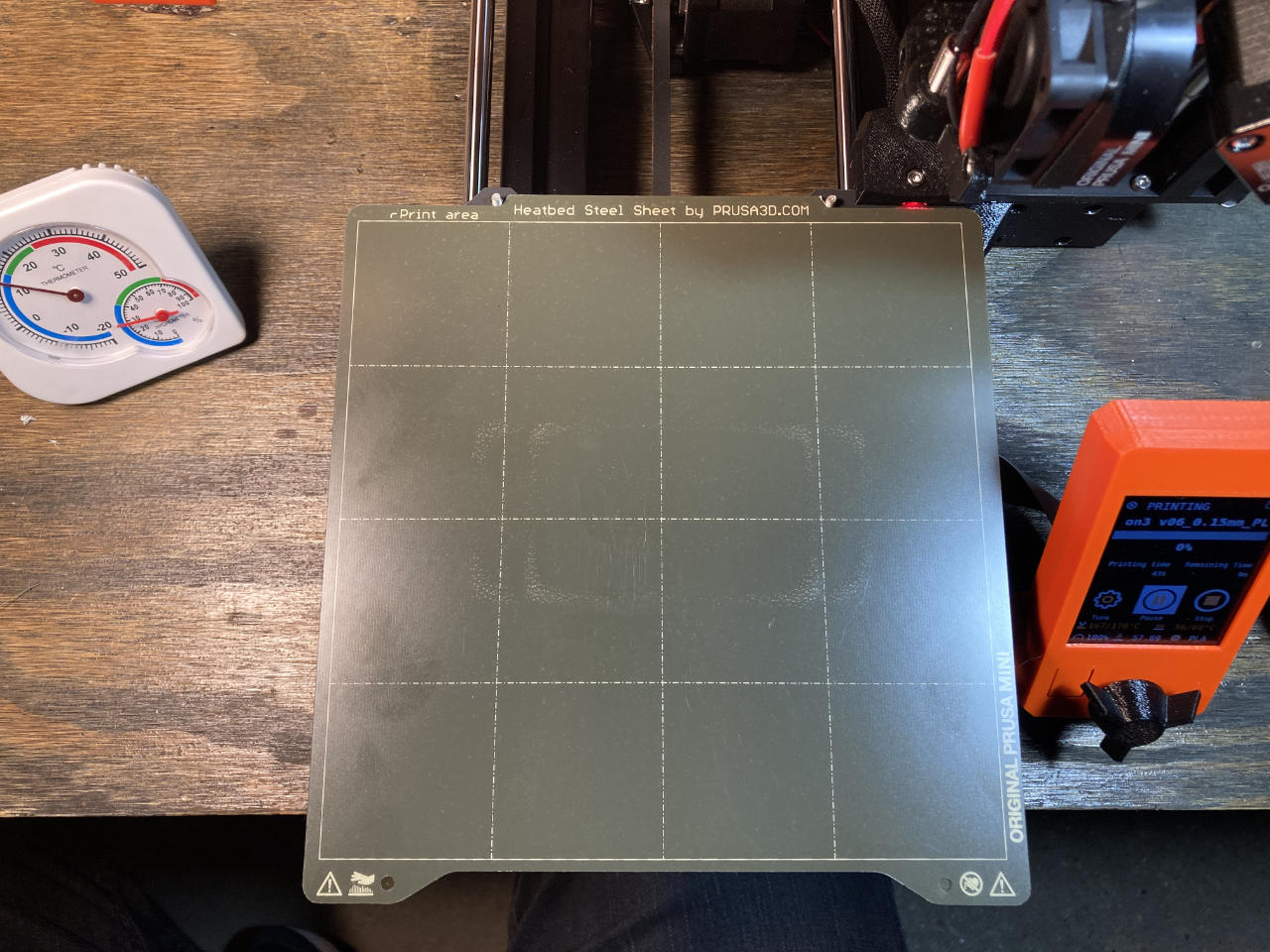 Right so time to print! I put in the included USB drive and… nothing. It doesn’t see the thumb drive. Oh hell, now what!? I go upstairs to my computer, insert the drive, and… it’s corrupted itself. Damn. My old printer used SD cards and they always worked. Is this going to be a normal occurrence? I hope not! I reformat the drive, then copy files to it again, and I print. All good. (Note: The drive had been fine since then, as is the other one I use for printing.)

A bit of a rough start, but overall I am really pleased with the machine itself, the experience of using it (apart from the few hiccups at the beginning) and that printing plate is awesome. I was at first worried about the “bubbles” that appeared on the surface, because the (cheap) plates I’ve used with the MSP wear out, but I’ve been told these will last… and they sort of “self heal” after a bit of time. Sweet.

Now of course the real test is when things go wrong. With the Prusa i3 I used at work, it was amazing, but once we had to tear down the extruder to deal with a nasty clog and that was a nightmare. So time will tell as far as how things go when things go wrong. Right now I can pull apart the extruder to remove a clog on my MSP or an Ender 3 in less than ten minutes. For the MINI, well… I don’t know yet. Maybe it won’t clog. (Ha! Just kidding! It will. It’s a 3D printer after all.) 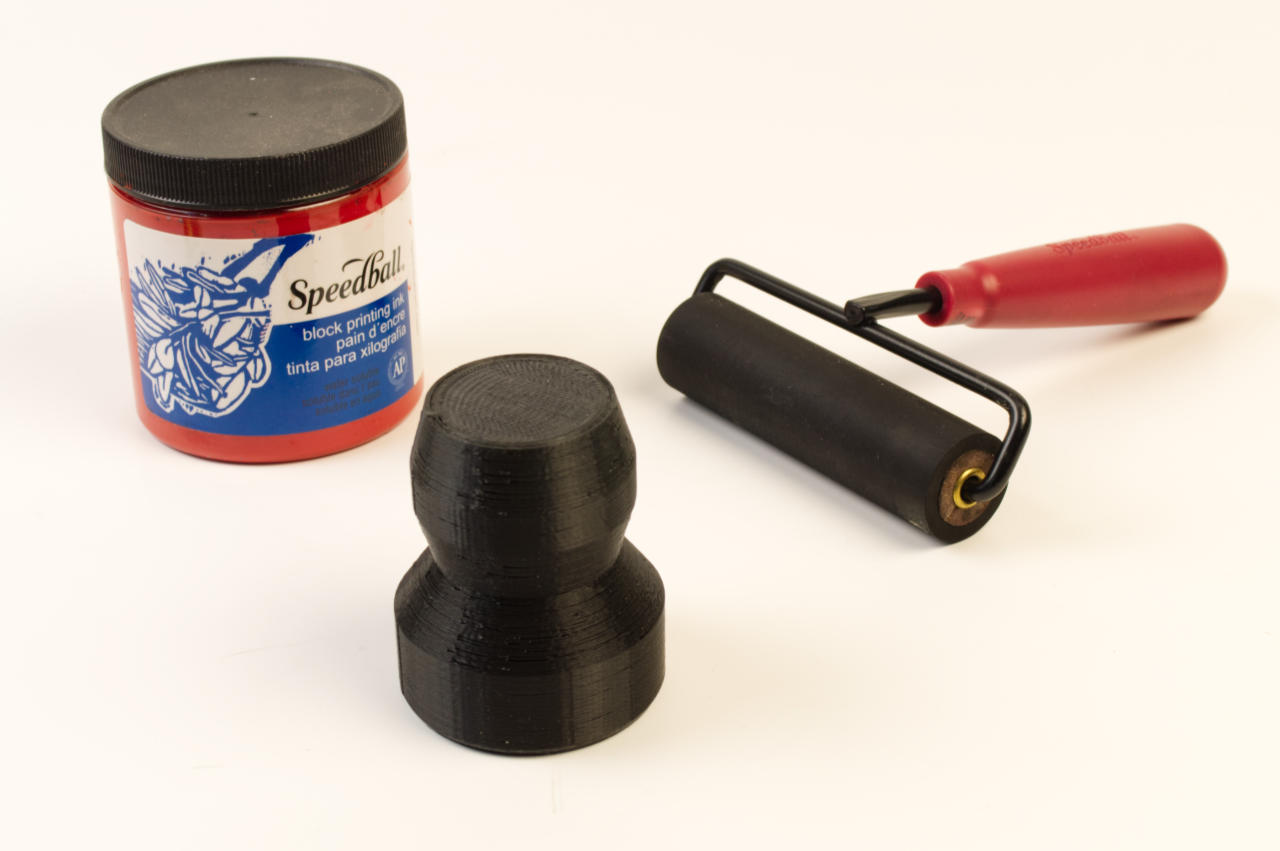 In the world of printmaking (of which I am far from an expert) there are many ways to print, including a printing press. I no longer have easy access to a press, so I’ve been using alternate methods of getting ink on paper. One method is to use a baren. The baren is a thing you hold in your hand to rub the paper against the printing plate, thus causing the ink to be transferred.

I bought a cheap Speedball baren years ago, and I never liked it, so I started looking at other barens. Now, printmakers tend to appreciate fine things and aesthetics, and there are a lot of different barens out there. Some are made of glass, some are bamboo, some have rope or ball bearings or pads, etc. So I finally asked the wisest of printmakers I know, and Jessica told me she just uses a wooden spoon. 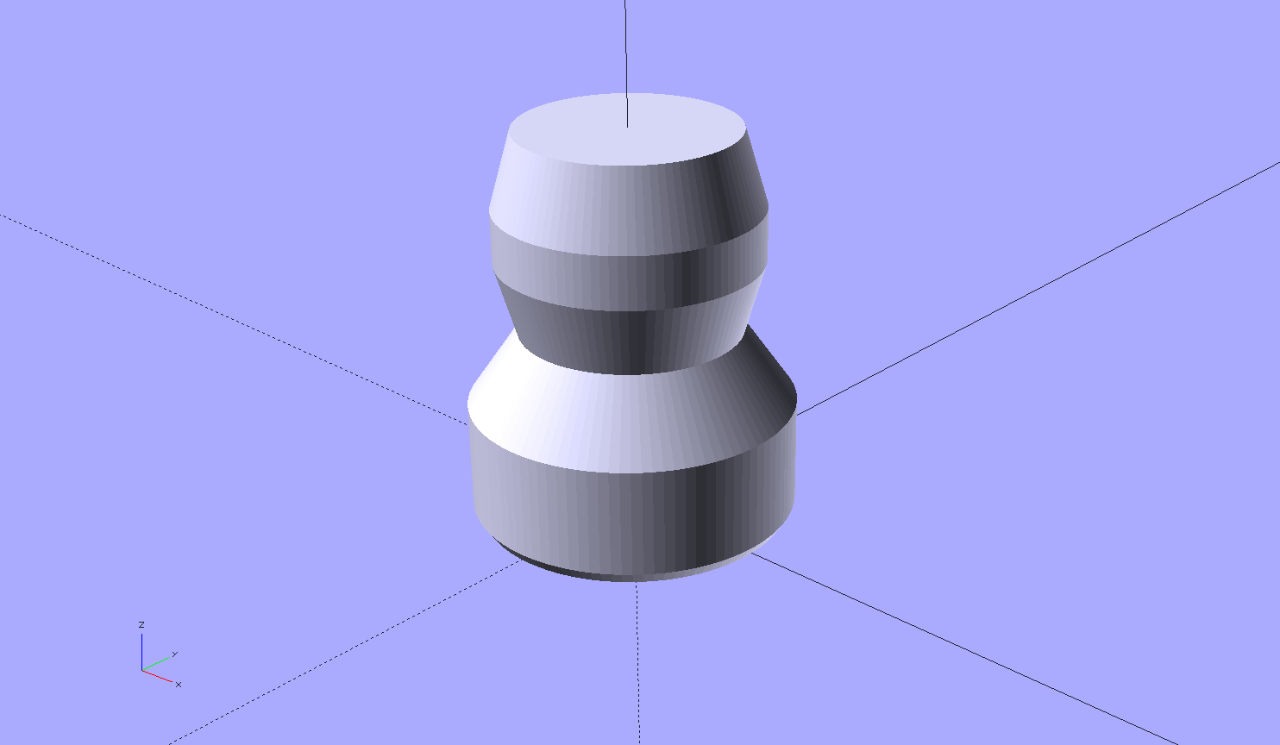 Well, I decided to just make my own baren. So I quickly modeled something really ugly, and I 3D printed it. After I printed it I thought of a better way to model it, and I still haven’t made a new one. This one works, so I’ll just keep using it for now. It’s functional. It’s good enough. 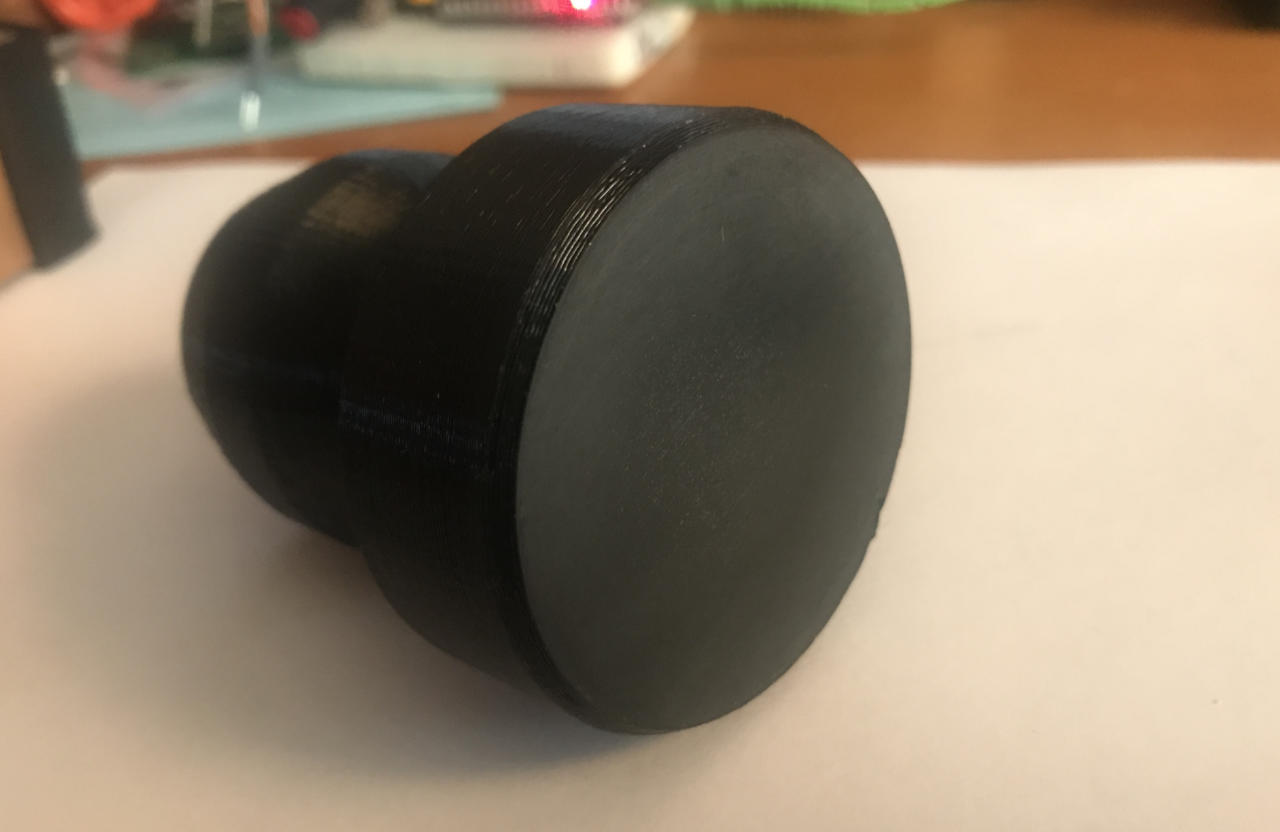 I did sand the bottom of it… quite a bit! Working my way up to high grit sandpaper until the bottom was smooth. Really smooth. It’s smooth. Yeah. Smooooooth. I also sprayed it with Liquid Wrench and rubbed that in real good. It glides across the paper really nice. I’ve done a few prints with it and I’m pretty happy. 3D Printing. It’s handy! 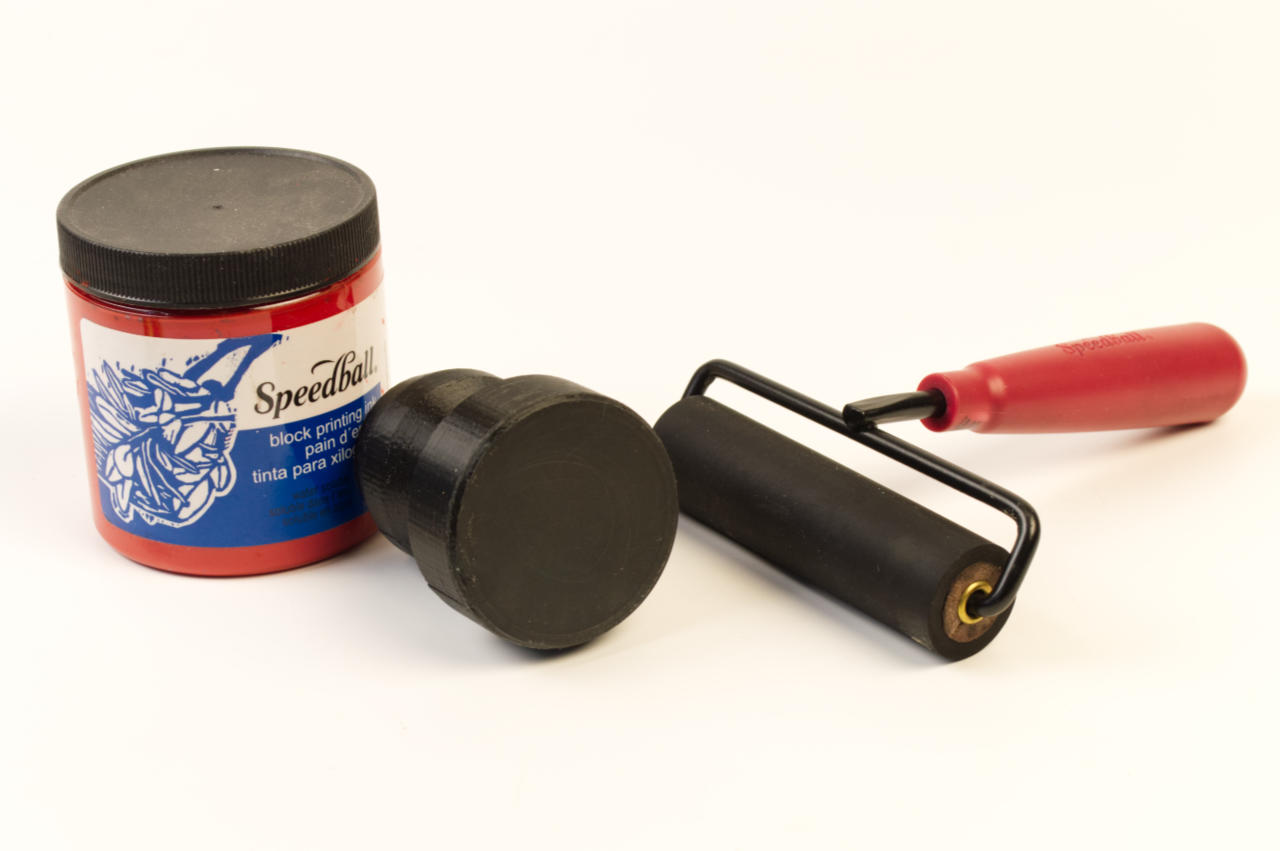