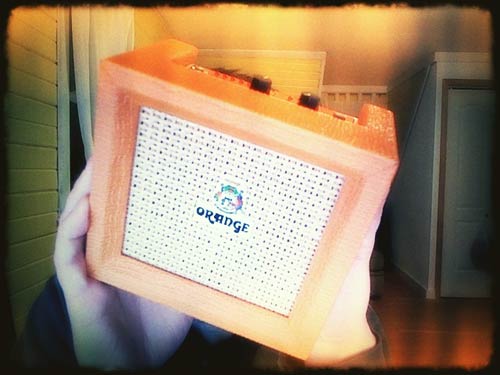 This is just a simple mellow song with bass and guitar. It’s totally boring, but I wanted to try something without drums, which also means I played all the instruments on the track.

The background sound in this song is me taking the steps down to the basement, which is not where I recorded this, but the steps are old and wooden, and look like they could collapse at any moment. As for the name, this is definitely not “high fidelity,” though I do like the movie, but it’s a bit more “Medium Fidelity” or “Medium Rare Fidelity” as it were… (Yes, I like word play.)

Phaser + Wah + Fuzz + Echo… yeah, I like this guitar sound. The background audio is from the May 2007 Web414 Meeting. I had it handy on my hard drive, and needed some background noise, it fit the bill. I also like the cymbals (there’s a bunch of them) and the slow pace of the song, but the standout, for me, is the guitar.

The name? I dunno, I was thinking of “Cinder Block to the Head” (since I never got to use “C-stand to the Head”) and decided on “Cinder Bloc Party” instead. (I guess there is a band called Bloc Party but I’ve never heard of them.)

This is probably my favorite song on the entire album. With this one I feel like it’s a complete song, and don’t listen to it thinking “It needs more!” so I’m actually happy. I even used it in a video I put out recently. As to the name? I don’t know where I came up with it, but I really like the sound of it.

I think at this point in the recording I hit a good groove, which is a shame, because we’re almost done… This also tells me I should start recording in January so by the time February rolls around I’ll be ready to track some good stuff.

On a scale of 1 to 10 (10 being awesome) I’ll give this song a 5. It’s really one of those things I think would work as an intro to a longer song… eventually.