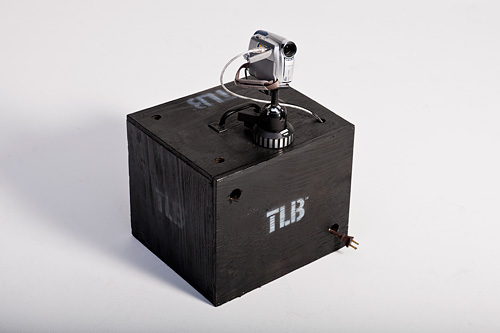 I built the original “Time Lapse Bot” in September 2009 before BarCampMilwaukee4 happened. I managed to get an old office chair that someone was throwing away and thought I could put it to good use to move around the iMac and camera rig I had attached to it. You can see the original Time Lapse Bot post for more info.

The main issue with the original Time Lapse Bot was that if you unplugged it, you had to boot it up again, set the clock, and then restart the image capture. We thought about a UPS to give it a bit of “unplugged” time, but never added one.

Next up was Time Lapse Bot 2 which used an old clamshell iBook in place of the old iMac. This made everything much lighter but because the battery couldn’t hold a charge we still suffered the inability to unplug it and move it while it was running. (We typically solved this problem with really long extension cords.) 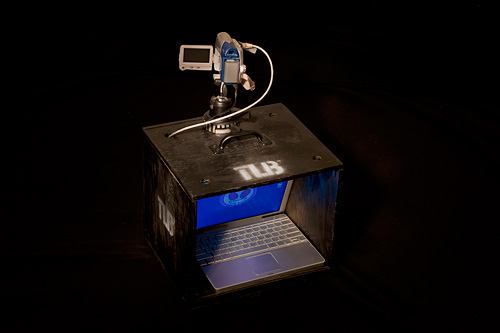 Time Lapse Bot 3 is the next step in Time Lapse Bot technology. We’ve taken an old PowerBook G4 (donated by Matt Gauger) which has a good battery in it, and paired it with a Canon ZR800 MiniDV camera, which also has a good battery. The result is a unit that can run on battery (at least for a few hours) and starts charging the batteries as soon as you plug in the AC power cord.

The entire unit is housed in a custom case which allows for easy transport. By “custom case” we’re referring to the plywood box that I constructed and painted black. That’s what we consider the pinnacle of “custom cases” around here.

The software that runs Time Lapse Bot is EvoCam by Evological. It’s $30 and well worth it. It’s feature packed, and rock solid. If you’re putting together a Mac-based time lapse rig that uses a video camera, or a web cam, or whatever, I highly recommend it.

Here’s a few of the time lapse videos we’ve made with the help of Time Lapse Bot.

We’ve finally reached a point where we are fairly pleased with Time Lapse Bot and it’s performance, so this is obviously not the time to sit still and relax. We’re currently working on a few upgrades to Time Lapse Bot, and hope 2011 brings even more Time Lapse Bot goodness to all the folks who enjoy time lapse videos…