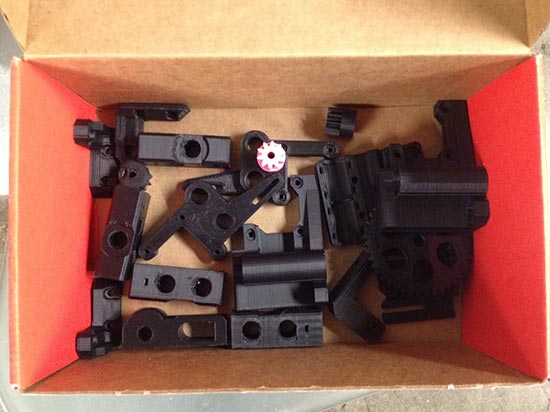 I’ve got a box full of Prusa i3 Rework parts! Well, not the full box, but we’re working on it. When I say “we” I mean myself and my team. This is all for a class titled “Digital Fabrication and Craft: Machines that Make”, which Frankie mentioned recently.

The class so far has been a blast! We’ve talked about the RepRap movement, and open source hardware and software used for 3D printing, and we’ve even designed a coat hook (yes, a nod to Adrian Bowyer.)

For the first assignment we are build Prusa i3 RepRaps, hence all the parts. We have a few MakerBots in the DCRL and the other students have been frantically printing parts. Meanwhile, I’ve printed most of my team’s parts on my RepRap Prusa i2. I sort of like the idea of my i2 making an i3. I may print enough parts to build out a frame and then transfer my i2 electronics and extruder over to it. Or I may just build another 3D printer instead.)

We’ve talked a lot about machines that make, and a little bit about MIT and what they’ve done. If you’ve seen the Othermill, you may or may not know it originated from an MIT project called MTM Snap.

One thing I’ve come to realize over the years is that you can design and build a thing, and you can design a product, and you can manufacture a product, and there are always compromises in process, materials, complexity, cost, quality, and fifty other things. A recommended reading in this area is Confessions of a Hardware Startup. Here’s an excerpt:

Our obstacle was that Jonathan had never intended MTM Snap for production. It was a design challenge experiment: to see if he could build a machine without screws. This is a great feature if you’re trying to save money as a graduate student, but from a manufacturing standpoint it had two major disadvantages.

Go read the whole thing if you’re interested in this. Since I’ve also been designing kits that are meant to be assembled and disassembled multiple times, I’ve seen similar (but different) challenges arise. But honestly, this all fits under the heading of “design” to me, because I still think design is about solving problems.

I’ve also been thinking a lot about the machine I’ll build. I probably won’t build a drawing machine right now (more on that later) but there’s a reason I’ve been researching the Othermill and been hankering to use a Shapeoko. It’s all coming together!

(See also: How To Make Something That Makes (almost) Anything.)