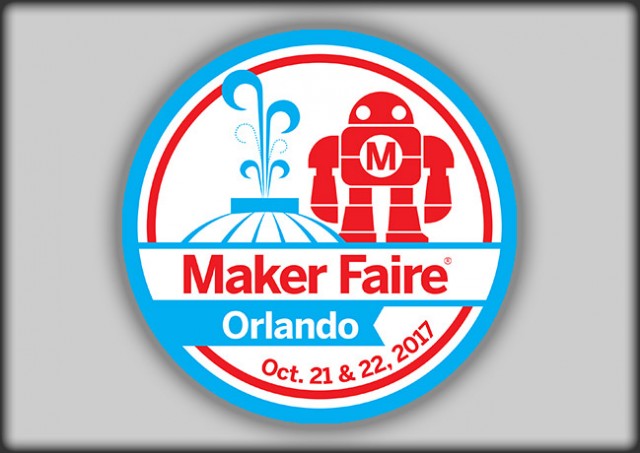 Maker Faire Orlando happened the weekend of October 21st & 22nd, 2017, and I was there! The team that produces the event asked if I could be part of their team as a “Producer in Residence”, so I jumped at the chance and after a few weeks of recovering from Maker Faire Milwaukee, I was headed to Florida for my first Maker Faire down south. (I managed to miss Nashville and Pittsburgh because I had some other commitments and wasn’t sure doing four Maker Faires in four weeks was the best idea.) 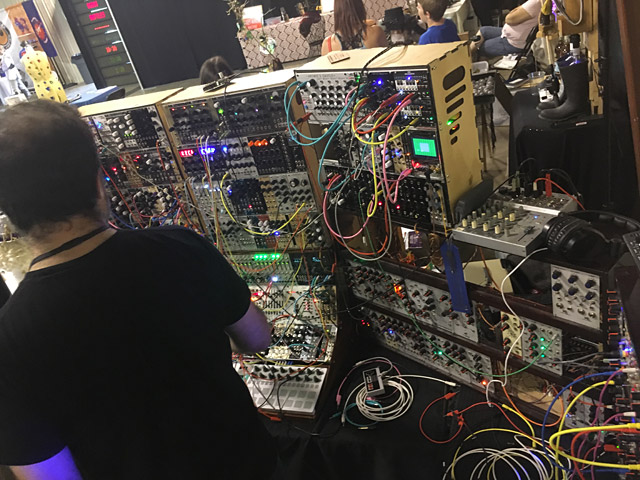 When I produce the Milwaukee Faire I’m part of a small team that coordinates everything. I’m usually in charge of Maker Relations as well, so that means I deal with 250 makers in some way or another. It was strange (and exciting) going into Orlando not really knowing any of their makers. (Well, even that isn’t really true, as I started browsing the list and looking up some of the makers I definitely wanted to meet.) 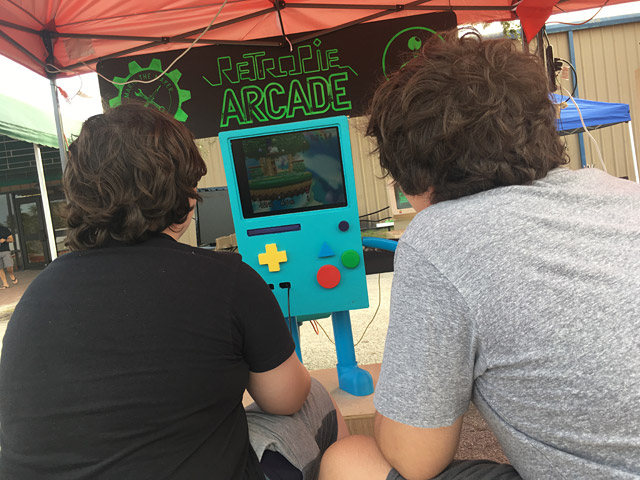 I arrived Wednesday afternoon and headed right to MakerFX Makerspace, which is home to the Maker Effect Foundation, which organizes Maker Faire Orlando. We took care of things there with a plan to hit the fairgrounds Thursday morning. Compared to Milwaukee, it felt like we were a little behind schedule. In Milwaukee our core crew goes on-site Tuesday morning and starts moving things in and getting set up so that we can bring in large exhibits and complex setups on Wednesday. In Orlando we were running just a bit behind, so we spent a good amount of time Thursday chalking the floor grid, dealing with signage, electrical, water, barricades, and other set-up things. More people joined the crew as time went on, and everyone was busy getting things ready. 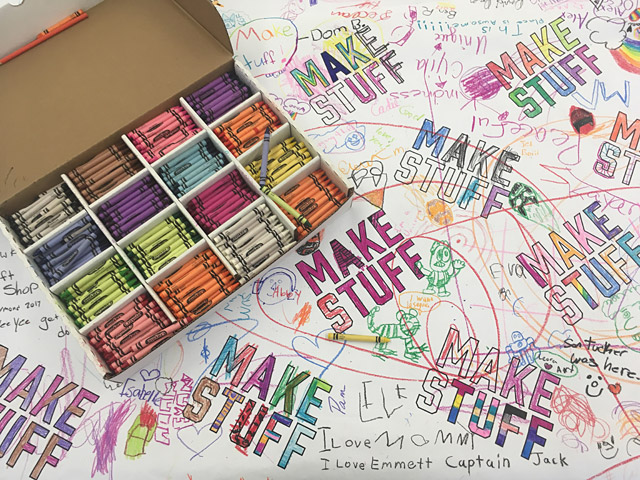 Friday was the day for maker load-in, and I think that’s always a bit hectic no matter what city you’re in. It’s all about getting dozens (or hundreds) of people and exhibits in place as quickly and efficiently as possible. All at once. Does anyone have this process perfected yet? We also had a Maker Mixer Friday night and then some of us managed to get a bit of sleep before the Saturday morning madness began. 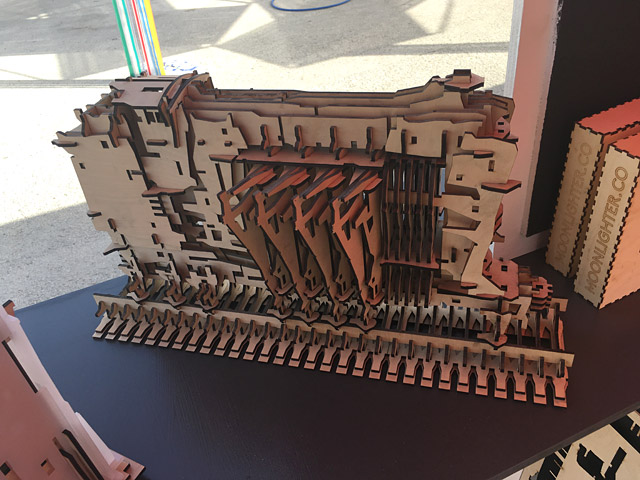 Again, Orlando is different than Milwaukee. We’re both at a fairgrounds, but Milwaukee is a free event, and Orlando is a paid event. Both of those create a unique set of challenges, but both share many of the same issues. That said, while we had to scramble a number of times, the critical things got resolved quickly. (One of the biggest problems was air conditioning not working properly, or working too well. People were too hot, people were too cold. You can’t please everyone, right?) Orlando had a much larger crew than Milwaukee, and everyone had a radio with an earpiece, which made a huge difference! The best thing about helping out in Orlando was seeing how they do things, and being able to analyze the process in Milwaukee to look for improvements. 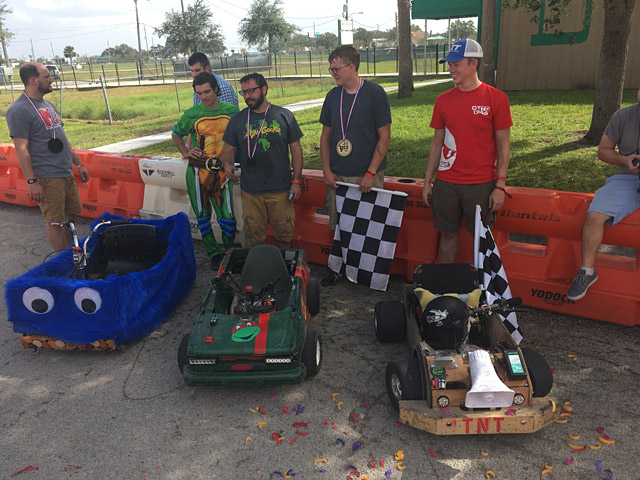 While I was busy making a list of all the things Orlando does really well (often by just quickly snapping a phone photo of something) I also offered advice about how Milwaukee does things, and some of the problems we’ve been able to solve in the past four years. Through all of this, Chad from HackPGH was an MVP (that’s Most Valuable Producer) because he’s been a producer in Pittsburgh, Milwaukee, and Orlando, so he’s seen a lot. He’s also served on the crew for Bay Area Maker Faire, and the National Maker Faire. I see Chad as a conduit between Maker Faires, and able to share best practices between them. 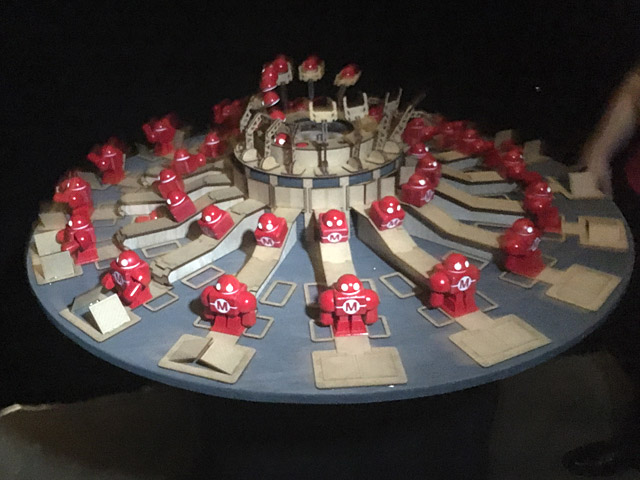 Saturday was a long day, with a lot of running around dealing with various issues, but we got a short break to hang out at FamiLab in the evening. (This was my second visit, as I was there back in 2016.) Sunday in Orlando was typical of many Maker Faires I’ve been involved with. A bit more relaxed than Saturday. Most of the critical issues are dealt with by then, and you can ease back on the throttle and let things run a bit. I was really pleased to be able to take a break on Sunday and see a good amount of the exhibits. (I also handed out some Maker of Merit ribbons, which was super fun!) After the Faire ended we had to deal with load-out, which again, is not a lot of fun, and pretty hectic and stressful. (Once again, does anyone have this process perfected yet!?)

So yeah, I’ve now helped produce a Maker Faire that wasn’t in Milwaukee, or even in Wisconsin, or even in the Midwest. It was in Florida, where it’s hot and humid and they have “fire ants” and no cold water from the tap. It was awesome and amazing and different… and I loved it.

Oh, I diverted from where I thought this post was going, so I’ll be following up with a look at some of the exhibits and projects I saw.