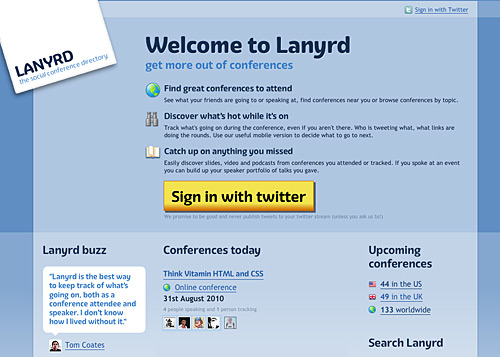 Lanyrd has launched. It’s a social conference directory. You log in using your Twitter credentials. It sounds like a neat idea. Obviously I need to complain about it…

Now, I’ve been a fan of Simon Willison for many years. He’s a blogger/developer who has done a lot of interesting things. He’s even written a lot about OpenID over the years. I sort of feel like that’s all been thrown out the window with the launch of Lanyrd. Twitter is your only identity.

Now, to be fair to Simon, I have no idea what is planned for Lanyrd, and it may grow to support other identity options, or maybe it’s just another tool that was built for, and works specifically with Twitter. It does make sense, as it would use your Twitter network to make all the connections.

But part of me sees this fracturing of the web, and makes me a little depressed. If Lanyrd was a services I wanted to use and I was not a Twitter user, I’d feel excluded. It makes me feel like Twitter is my main identity online, and I guess that bothers me. I’ve been using things like usernames, and emails, and even URLs to log in to web sites for years, but now it’s just my Twitter account. Don’t have a Twitter account? You’re out of luck.

Again, I don’t mean to be hard on Lanyrd or single them out… I guess I just see sort of thing as another step in the centralized identity that you can’t really own, and I’m a fan of decentralizing things.

I guess the old method of making connections would be something like:

Yes, that’s probably inefficient, and a lot more work, but sometimes freedom comes at a price. There must be some sort of middle ground between making a system elegant, simple, and easy to use, and providing choices. I just don’t know where that middle ground is.

I can’t say I wasn’t expecting this – as a big advocate of OpenID (as you can see from this Lanyrd search http://lanyrd.com/search/?q=openid&people=simonw ) releasing something that’s entirely locked to a single identity provider was always going to be a controversial move.

Then I got bored of waiting. By plugging in to the Twitter ecosystem I get all of those advantages, but I can actually build something successful and popular today. We did talk about building Lanyrd to be identity provider agnostic – accepting OpenID, Facebook and other things – but in the technology conference space it’s extremely rare to find a speaker who doesn’t have a Twitter account. The engineering and UI/cognitive effort involved in supporting multiple identity providers simply didn’t feel like a good investment of time.

I think we’re doing some really interesting things with identity in Lanyrd – my favourite thing about the service is that you can add people as speakers at a conference via their Twitter name without them even having signed in to the service, but their followers will then see their appearances when they visit the site. Before launch, we had over 1,000 Twitter identities associated with conference speaking appearances (and in some cases book authorships).

That’s my justification, anyway. Make of it what you will.

I went ahead and added BarCampMilwaukee 5 to their conference databases.

Thanks Simon, I think understand where you’re coming from, but I still get a little twitchy when I see something new, especially something that looks useful and cool, and seems like a good idea, and I am limited to registering/signing in with my Twitter identity. It sounds like we share the same frustration in many ways…

Well, I thought I should give it a try, and it was definitely easy to use… The results are here:

The only real issue I had, which is probably BarCamp/Unconference specific, is that there is no set line between staff/organizers/speakers/attendees. For most typical conferences though, those dividers probably work quite well.

Jeramey, Crap, now we have two of them! Quick, you change yours, ok? :)

I like the BarCamp Milwaukee 2010 page. It makes me think I’m missing out by not adding my name to the list.

Mine was first, but yours does appear to be more complete. I’ll see how I can go about merging/destroying mine.

If Simon is still following this conversation, we found a glitch in the site. I used .com and Pete used .org, perhaps a “is this what you’re really looking for?” type test should be applied to cross-domain check.

We’re working on better duplicate detection during the process of adding a conference, and we’re also building a merge tool (there are a few duplicates in there) to fix duplicates and redirect one to the other. Thanks for trying out the site!

Quote (can’t find syntax guide):
“We did talk about building Lanyrd to be identity provider agnostic – accepting OpenID, Facebook and other things… [but] engineering and UI/cognitive effort involved in supporting multiple identity providers simply didn’t feel like a good investment of time.”

This is something we really need base libraries for. I am in the same situation, but in a market where no identity provider is used by the majority (non-techie audience, older people). Yet it’s great to have user information, so I don’t want to fall back to plain ‘ol stand-alone email + password signup.

I’m kind of running into this with a social service right now, too. I don’t really want what I’m building to be *too* concerned with identity, and want to outsource it as much as possible to other sites that people call home.

This looks especially ominous as I started playing with OpenID widgets that pre-build URLs for high-profile providers.

This sounds like a job for webfinger – but I don’t think it’s quite there yet.

I had thought webfinger would be simple, but I spent well over 30 minutes and couldn’t get it all working. Urgh… (also, does Badger have any relation to this? https://www.drumbeat.org/project/open-web-badges )