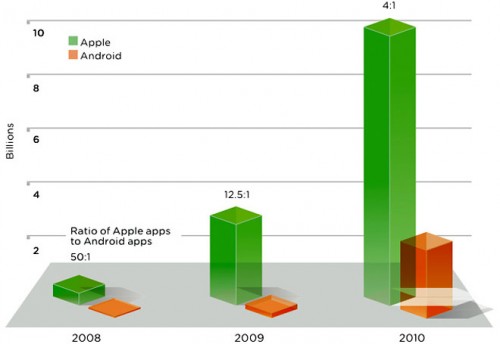 10 replies on “Android vs. iPhone”

I found that Wired article really disappointing. It doesn’t at all explain how the Android ecosystem threatens the iPhone; it just assumes it does and tells a story under that assumption. It briefly mentions at the end that we’re still years out from the point at which the two are competing more against each other than they are cooperating against the complacency of non-smartphone buyers. So in years, they might start really competing. But if we go back just as far as we’re being asked to take a leap of faith forward, neither of these platforms existed yet, and Windows was the dominant mobile platform. So how do we even know Android and iOS won’t be completely gone by then, replaced by something totally new?

Then the article ends with “make no mistake: As is often the case in technology, only one platform will prevail.” But again, there’s nothing to back up this assumption. Apparently I shouldn’t be typing this on a Mac, because only one platform can prevail. Oops.

Back to your decision, just like the wider market, I say it’s a false choice. You could buy an Android device, keep your iOS device, and enjoy both.

I could buy an Android device and have both, but like anyone with limited income, or bandwidth, or attention, or whatever… I’d probably opt to carry just one around with me, and primarily use one. As for as a “phone” goes anyway. For the tablet world, if Android devices get cheap enough, I’d perhaps consider one and love to explore it’s “openness” with some specific uses in mind. Make no mistake, the future is unwritten.

One other thing to consider: Android is “open” on paper, but not always in practice. For example, Google still hasn’t released the source for Honeycomb, the latest version of the Android OS http://www.businessweek.com/technology/content/mar2011/tc20110324_269784.htm Also, carriers hold much more sway with the Android OS and devices than they do with Apple’s. In fact, they hold NO sway with the OS and device with Apple. Compare a stock Android device from Verizon or AT&T with the iPhone. The Android device will have a lot of carrier customizations, crapware, even things disabled. Also compare how OS updates are rolled out. Yes, Apple will sunset devices at some point, but you can be sure if you have a relatively recent device and a new iOS comes out, you’ll get it. Not so on Android: you can buy brand new devices in stores now that have an OS 2 or 3 releases behind with no clear upgrade path.

On the other hand, if by open you mean freedom to tinker, I would say that Android does have a slight edge by default here, but if you want to tinker on an iPhone, just jailbreak it and the world is now your oyster. Yes there will be a little cat and mouse game every time a new iOS release comes out, but that hasn’t been a serious roadblock.

Joel, yes, I’m talking “freedom to tinker” as it were… You can run Java apps on Android devices, and not on iOS devices, right? I’m hoping there’s a bit more “hackability” to Android devices.

If you’re defining freedom to tinker as running Java apps on your device, then yes Android is a clear winner. If you just mean run your own arbitrary apps then iOS is a candidate if you don’t mind jailbreaking (it’s super easy to do and reverse if you want). You can’t run Java apps on a jailbroken iOS device (that I know of), but you can run arbitrary iOS code. There are toolkits for building native iOS apps from .NET or Javascript, maybe there’s something similar for Java if that’s your language of choice.

I seem to recall from your mkepug presentation that you weren’t too fond of Java though ;)

Joel, yeah, I have a love/hate thing with Java… just like every other language.! :)

I’ve not gone the jailbroken route yet, and I think it’s a shame that you have to think about that if you just want to run your own apps on your own devices. This is where Apple/iOS falls down in my opinion…

That said, I’m having fun with Processing.js right now, and will look at iProcessing to see where that leads me.

I had an iPhone 3GS. I hated AT&T. I made the stupid mistake of running over to Verizon and getting a Droid Incredible.

Android as an OS is nowhere near ready for primetime. It’s slow (at times), cumbersome to use, not visually appealing, and oh yeah, sucks up my battery life just by looking at the phone.

Oh and let’s not forget when I powered my phone off for a 4-hour plane ride only to discover it had a dead battery on landing b/c powering it off apparently “failed” and it never fully powered off. (I battery pulled for the flight home.)

Adam, thank you for confirming what I had thought… everything sucks, in it’s own unique way.