One of the promises of 3D printing is being able to print replacement parts to things around the house that break. Since I’ve got access to a MakerBot Cupcake at Milwaukee Makerspace, I figured I’d give this a try, not just downloading some object from Thingiverse, but actually going through the entire process of measuring, designing and printing a part. 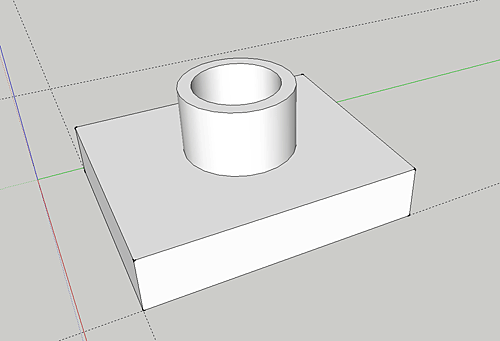 I got out the calipers and measured the light switch to determine the size of the replacement part I’d need to create, and then I used Sketchup to design the actual object at the correct width, height and depth per my measurements. Since the original part was long gone, I had to estimate how it should be designed, so I just used my best guess.

My first attempt (version 1 above) may have looked good, but even if it was a perfect match to the original, the fact that it was a very small part, and had to be printed on a older model MakerBot meant that the actual print was terrible. The part was just 10mm x 12mm x 6.7mm. That’s pretty damn small. 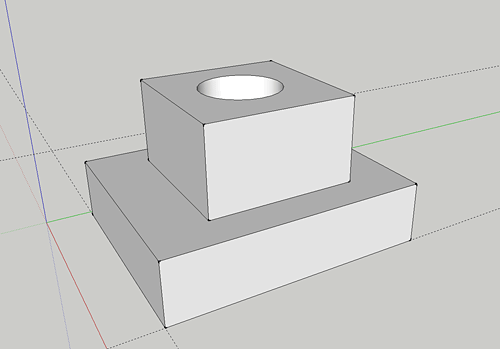 Version 1 just didn’t work. The hole that was meant to slide over the shaft of the light switch was too short, ill formed, and not even close to round in the inside. So for version 2 I changed the circular structure to a rectangle with a hole in it, as well as making it a bit thicker all around.

Version 2 was definitely better than version 1, but the hole still wasn’t looking too good, and the top (where the MakerBot finishes printing) was pretty ragged. I figured I could sand it down flat though if needed, which is why I ended up making it taller.

(Oh, I should mention that with version 1 I just printed it at the makerspace and then brought it home to test it out. It would have been awesome to have a 3D printer in the house, because I probably could have just kept tweaking it until I got it right, but as it were, I printed one, took it home, and then there was a week before I could try the next version. So yeah, this is why you need a 3D printer at home!) 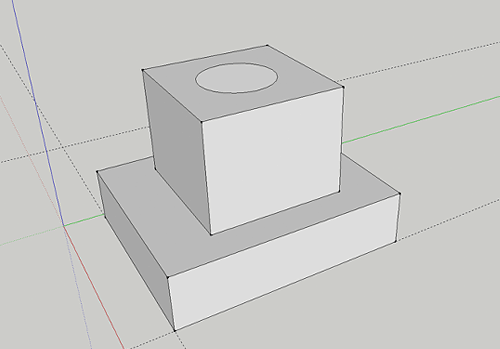 So right after I printed up version 2, I was concerned it still might not work, so I quickly tweaked the file a bit to make it taller, and to remove the hole completely, with the idea that I could drill a nice clean hole at the appropriate size. Version 3 looked pretty good out of the Cupcake. Not great, not amazing, but pretty good… at least in comparison to the others. 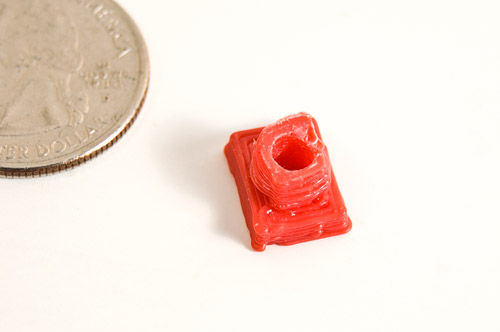 So here’s our actual printed object. Yeah, it looks pretty rough around the edges, at least from this view. I ended up using the Dremel on the top to get it a bit shorter and smoother, and then drilling a hole that would allow it to fit on the shaft. Of course, I don’t have metric drill bits, so I tried to find something close. This was my first real attempt at using the Dremel or a drill on a printed part. It wasn’t great. The Dremel doesn’t react the same way it does to metal or wood. Do I go slower or faster or what? I’m not sure… As for the drill, I tried to just hold the piece in one hand while drilling it. That was not ideal. Perhaps next time I’ll use the vice.

I know that in the photo it looks pretty sad, but it actually worked, so cosmetic beauty aside, this was mostly a success. 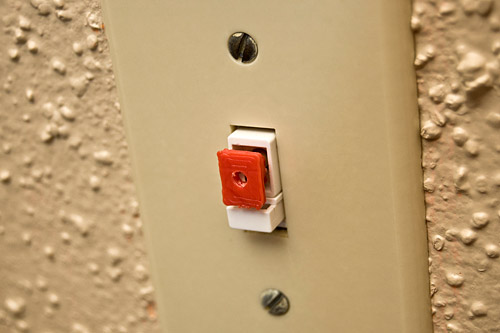 So in the end, this part, even with the failed attempts, probably consists of less than 5 cents worth of plastic. This is the beauty of 3D printing at home. To get a replacement from the manufacturer would have involved me contacting them, ordering or asking for a replacement, and then having that replacement shipped to me. Even if I ended up talking to some nice person who could put one in an envelope and mail it to me at no charge, the postage stamp alone would have cost more than the raw materials needed to make the part.

Oh, you may have noticed the hole in the button. Yeah, I drilled it a bit too much. Also, the red doesn’t really match very well. I’ll probably print it again in white, or maybe glow in the dark plastic, which would make even more sense.

That quarter is absolutely filthy.

When printing replacement parts, I feel like 3D printing suffers the classic Unix problem: it’s only cheaper if your time is worth nothing.

Kurt, I definitely spent some time on this whole process, but this was the first time I attempted this, so there was a lot of learning along the way. I’m going to assume the process will be much easier/faster in the future, not just for me, but for everyone.

Of course if this were a part I could find on Thingiverse, the design process could have been like the whole “solve a problem once so many can benefit from it” sort of thing.

Also, to be fair, you may be thinking of Linux, and not Unix. ;)

Why would I send you a second shiny quarter when you couldn’t take care of the first one? You’re just like those fat cats on Wall Street. Rasterweb is too big to fail.

I have brought shame to my family.

I will just 3D print a quarter.

Unless you have some objection to me printing my own money…