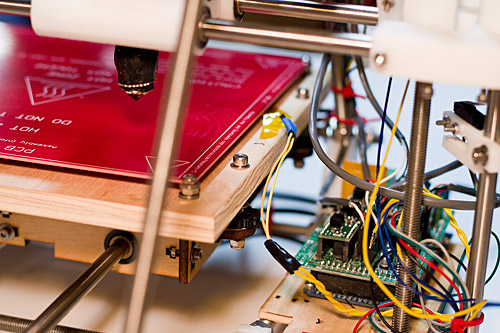 Here’s a RepRap update, which I plan to do every now and then to track the progress of the RepRaster 5000. (Yeah, that’s the name of it. At least until I come up with a better one.)

The RepRaster 5000 has been fully operational for about a month now, and I have managed to make a few things in that time. Most of my prints have come out okay… not great, but okay. 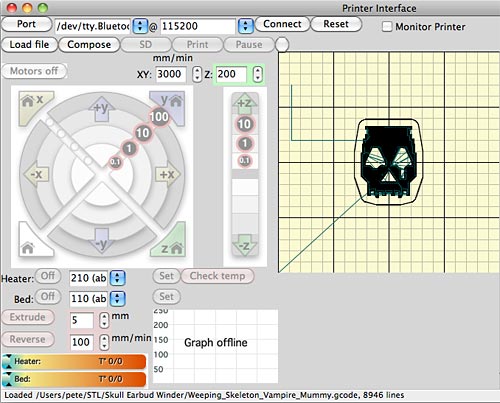 I’m using Slic3r and a pre-compiled version of Pronterface on Mac OS X 10.6.8. I’ve had one or two STL files that had some issues with Slic3r, but besides that it’s been a fairly solid setup. I’m still using Sketchup for some 3D modeling, and OpenSCAD continues to confuse me. 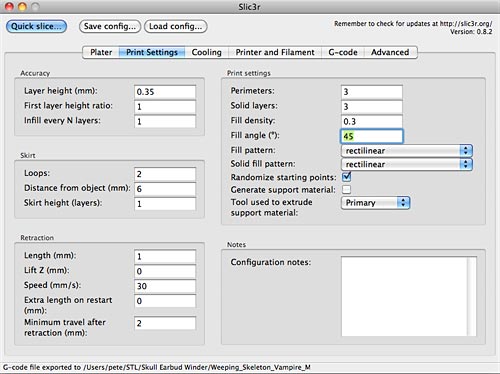 My first prints were on a sheet of glass taped down to my heated PCB. They turned out pretty bad. Because of the way the PCB was attached to the platform I couldn’t clip the glass tightly into place. Oh, the PCB was also mounted flat(ish) to the wooden platform. I ended up raising up the PCB above the wooden platform, thinking it would help it heat up faster (it seems to) and I’d also then be able to clip the glass to the PCB. This is way better. Easier to work with, for sure.

So now I’ve got the PCB above the wood (spaced with a few nuts and washers) and the glass attached to the PCB with bulldog (AKA “binder”) clips. My first prints on plain glass were hit and miss, and the ratio was not improving. I tried ABS slurry (which is acetone with some filament dissolved in it) but that was messy and still didn’t seem to work that well. I ended up putting Kapton tape on the glass, and then just using nail polish remover to clean the Kapton well before printing. (I’d prefer to use the nail polish remover over the acetone if possible, since it’s less smelly.) Finally, I was getting really good adhesion! (I’m doing two skirt loops 6mm from the print.) 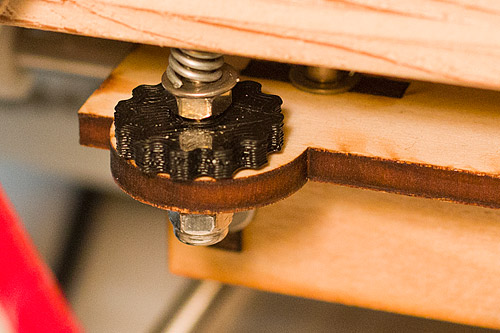 The one thing that really helped printing (so far) was leveling the bed, which was completely impossible at first. With just the nuts, there was no way in heck I was going to get things level. Then I found the Parametric Thumbwheel, printed four of them, and at last… a level bed! Again, one of the great things about a RepRap is that it can (often) print its own upgrades. I’ve got my eye on a few other items that might make things better/easier/faster.

I’m at a point now where I feel like I can print things, and while they aren’t the best quality yet, that will change in the future, with more and more tweaking. I’m looking forward to sharing tips & tricks at the Milwaukee 3D Printing Meetup happening July 1st, 2012, and 3D Printing Camp on July 21st, 2012. If you’re at all interested in this stuff, either event (or both!) would be a great introduction.