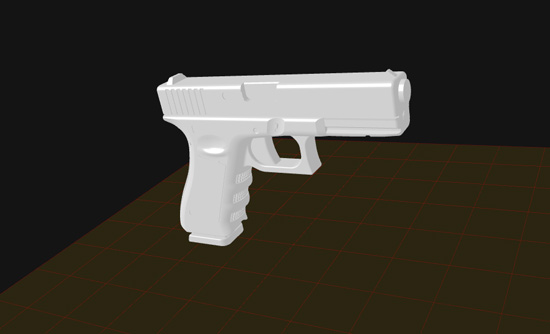 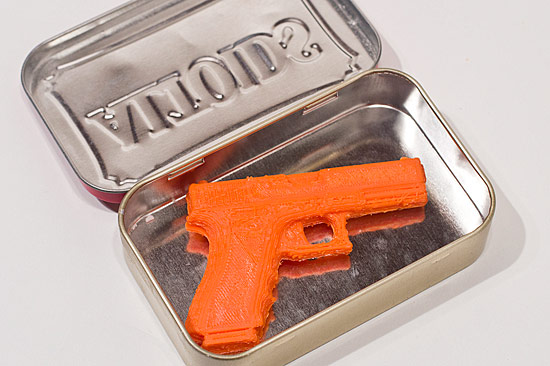 8 replies on “3D Printed Guns for Everyone!”

You’d be welcome to join me and the Mrs at the range any time.

And you’d be able to print one full-size for a lot more cheaply than law enforcement training units: http://www.uscav.com/productinfo.aspx?productid=7008&tabid=548

You’re absolutely right about the news outlets going nuts over something very simple – I only “printed a firearm” due to a specific definition in US law (the specific part I made is considered the firearm). Were I in another country, it could have easily been “man prints gun part” due purely to that area’s legal definition. In fact, by this very quirk of definition, I learned that I am not the first person to actually test a 3D printed firearm! A fellow on one of the firearms forums mentioned that the place where he works (a licensed firearms manufacturer) had printed (via SLA) and tested a silencer some years back. The 1934 Gun Control Act actually defines silencers as being firearms, so really, these “man prints gun; apocalypse is near” stories are old news.

Hmmm, should I mention I saw someone printing a silencer a few weeks ago?

[oops, correction to my previous comment – the relevant 1934 law was the National Firearms Act, not the GCA.]

I was there as well, and he never finished the print AFAIK. I cautioned that it was not exactly a great idea, despite being for airgun use only. I chatted via email about it with another attendee who is also a firearms enthusiast – while airgun silencers that are not intended for use on a firearm do indeed appear to be legal based on a recent court ruling (much to the chagrin of the BATFE, I am sure), I personally would much rather go through the standard procedure and have a proper registered unit.

We just put together a show at Corcoran’s Gallery 31 in Washington DC that really relates to this topic. The exhibit’s titled “Manifest: Armed”, and a lot of the work deals with issues surrounding American gun culture. The artists involved are Sarah Frost, the collective SmithBeatty, and Julian Oliver.

Check it out if you’re interested! It runs August 8-September 2. http://www.corcoran.org/exhibitions/manifest-armed