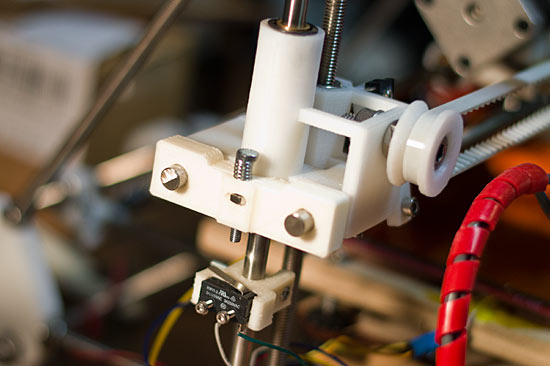 Somehow I can’t believe it’s been four months since my last RepRap update! I’ve got a lot to report…

In July I took the RepRaster 5000 to 3D Printing Camp in Madison, and that didn’t work out too well. The first problem was that I couldn’t get the bed up to temperature (and yeah, I print with ABS.) I didn’t notice the ceiling fan directly above me. I moved. I also managed to knock the Z end stop out of place, which made the extruder crash into the bed. No real damage from it, but I decided I needed a new end stop solution. The new one is way more solid. No easy way to bump it out of alignment.

I also took the RepRap to the Milwaukee 3D Printing Meetup. Once again something went goofy, but I did get it working fairly quickly after the first fail. (Just a few weeks ago I took the RepRap to BarCampMilwaukee7 and had no issues at all. Success!) 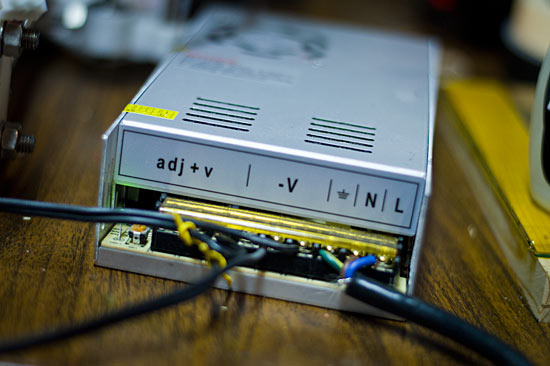 At some point I got sick of all those damn wires coming from the ATX power supply, so in the process of making them shorter, I hosed something up good and ended up with a power supply that supplied no power. I finally got a smaller (and more powerful!) power supply. I’m not 100% happy about the mains not being totally covered up, so I should make a case for it at some point. It works very well though… much better than the ATX supply did. 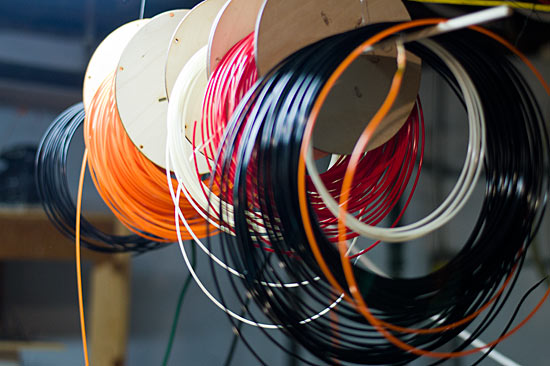 My great spool experiment was a bit of a failure. I mean, at least I don’t use soup cans, and while I still think my idea was good (or at least looked good) trying to wind a coil of filament onto a spool is damn near impossible. Just ask my daughter, who had to hold back from laughing when the power drill kept slapping me in the head with filament. I’ll probably move to one of those adjustable filament holders you can easily get a coil onto. At home I end up just hanging the filament from the ceiling, so that works fine. 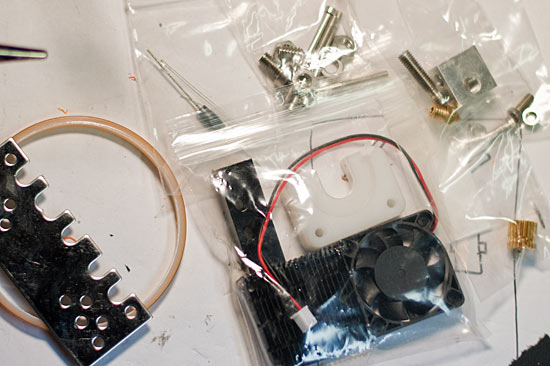 I ended up getting an extruder from the QU-BD Kickstarter campaign, and I haven’t bothered to assemble it yet. My original plan was to donate it to the DIY 3D printer we were going to build at Milwaukee Makerspace. Since we ended up getting a Replicator, we didn’t build a printer. It’s a 1.75mm extruder, and since I use 3mm now, I may end up switching to 1.75mm in the future, so it could come in handy. 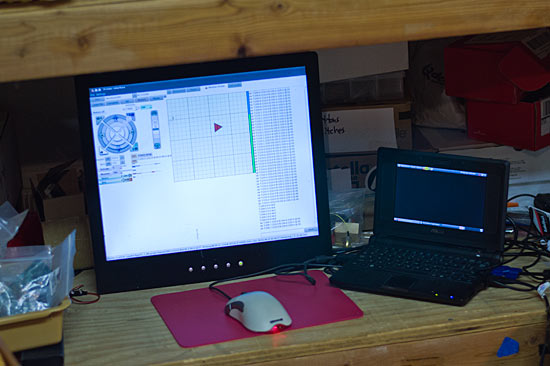 My best RepRap hack was getting my MacBook out of the picture and making good use of my old Eee PC 701. This was the first netbook ever released, way back in 2007. I’ve struggled with how to make it do something useful, and now it does. I’ve connected an old LCD display I got for free to it, and it sits on the shelf near my workbench. It does one thing… control the RepRap. It’s plenty powerful for that. I do all my modeling and slicing on my MacBook, so the Eee PC just runs Pronterface. And for traveling I can just bring the Eee PC and it doesn’t take up much room. 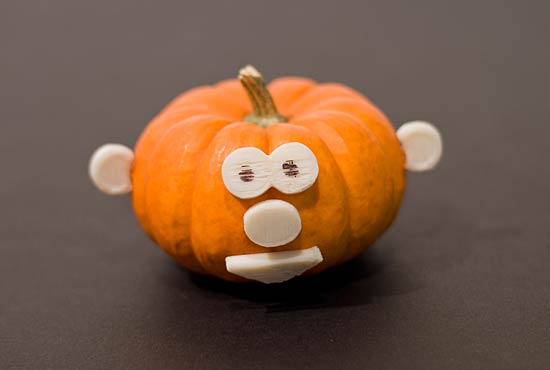 Hey look, it’s Mr. Pumpkintatohead! Nothing amazing, but I’m getting better at using OpenSCAD. I managed to design all the parts (minus the knobs) for my Laser Kaleidoscope in OpenSCAD (no, they are not parametric, but hopefully I’ll get better as time goes by.) I also managed to complete a home repair thanks to OpenSCAD and the RepRap. Hooray!

I’ve still got some challenges. Now that it’s getting colder out, and I’m printing bigger objects, I’ve got some warping issues. As winter comes, this may be my biggest problem. Besides that, things have been working really well. One thing I’ve found is that I’m not happy with my z height. It’s just 75mm, and I’d like to see a bit more. Oh, I also switched from Sprinter to Marlin, so I may be able to get a few more millimeters of height by just updating the firmware. (I was a little conservative at first.) I can probably gain a few more millimeters with a new piece of plywood under the bed. There’s always something to tweak with a RepRap…

I think the biggest change from June to October is that I am now confident enough that I can hit ‘print’ and leave the basement and I’ll come back to a successful print. I used to just stare at the bed as the skirt went down, and that first layer went down… in part because I was fascinated, but also in part because I always assumed something would go wrong. Things tend to go right almost every time now… it’s almost like having 3D printer at home is a normal everyday thing. :)