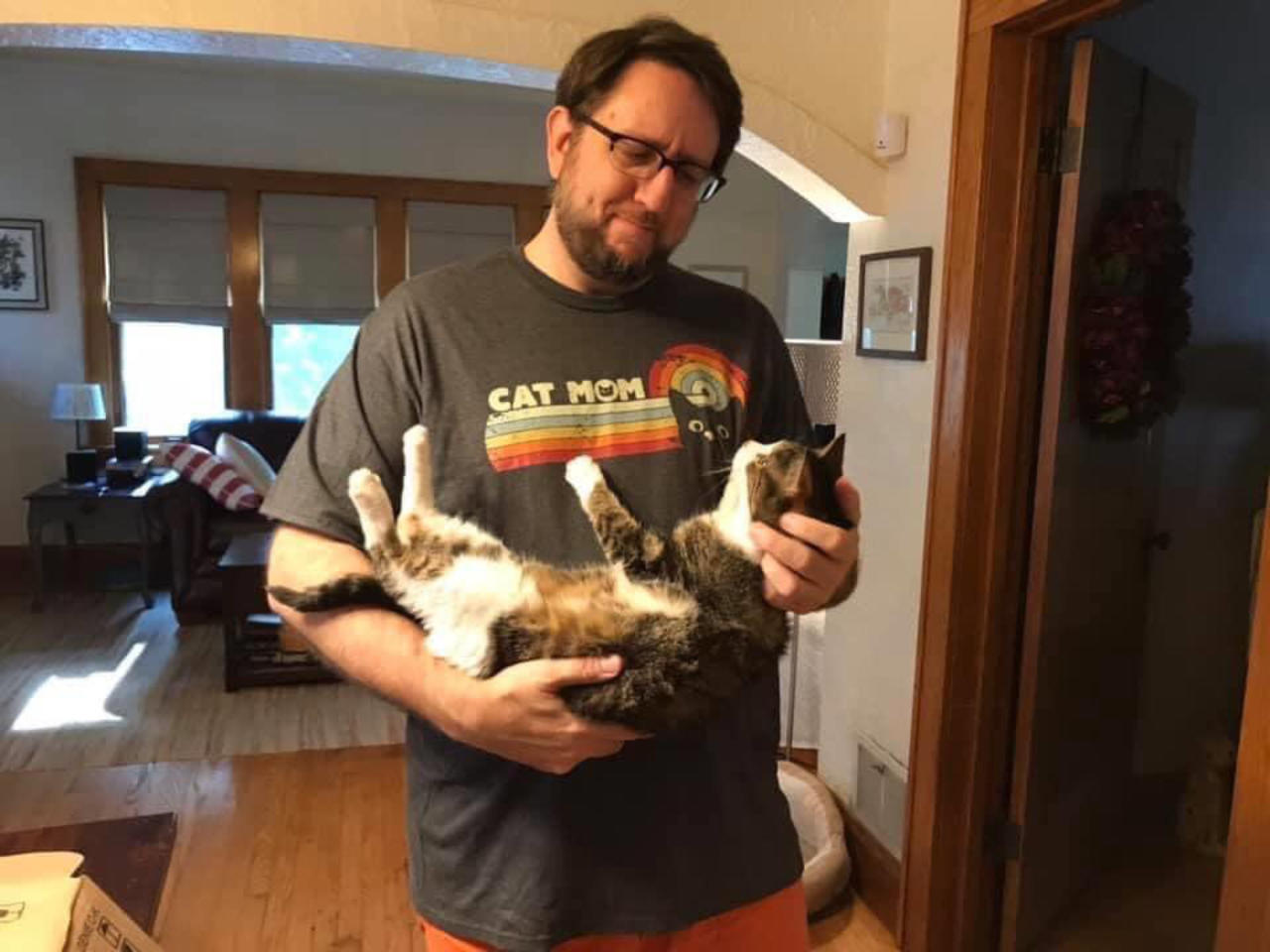 Note: This is really just posted for me. You can read it, but mainly it was really important for me to write it shortly after May 27, 2021.

I had cat. For nearly 18 years, I loved this cat, and this cat loved me. This cat was named Tinkerbell. I’ve really only written about Tinkerbell once, back in 2008 when she had skin cancer, and we thought she would die. She proved us wrong, as she did many times over the years. Anyway, here’s my notes on the cat named Tinkerbell. (It’s gonna be long and rambling, and I may get a bit choked up writing it, but it’s worth doing.) 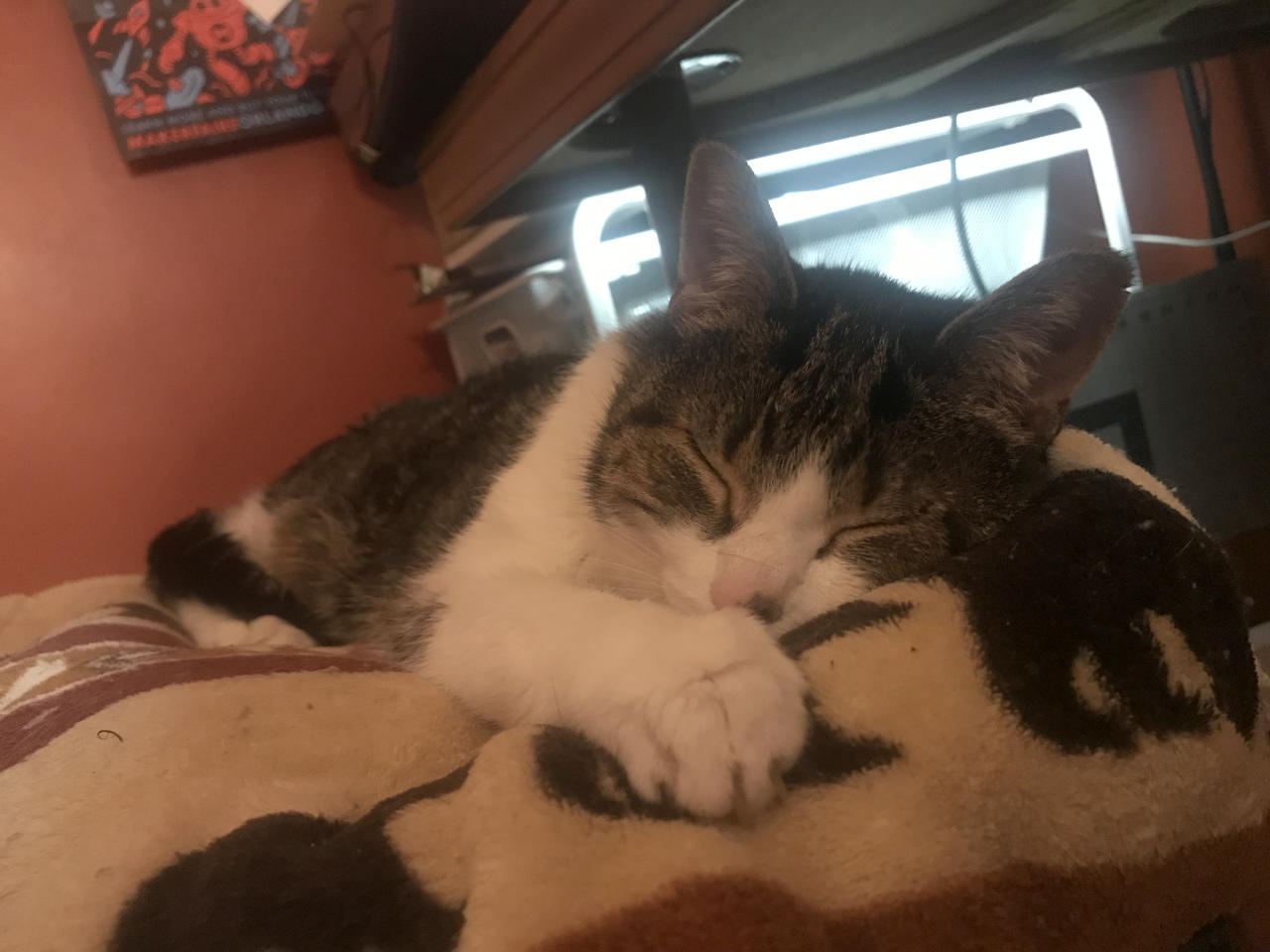 Back in 2003 a woman came to my house with two cats in a cat carrier. I was sitting on the floor of my dining room when she opened the door and the larger cat bolted out and into another room, and the smaller more timid cat walked out, and sat on my lap. Game over. This was when I met Tinkerbell. (Note: I did not name her that, she had the name and we just left it as that.) 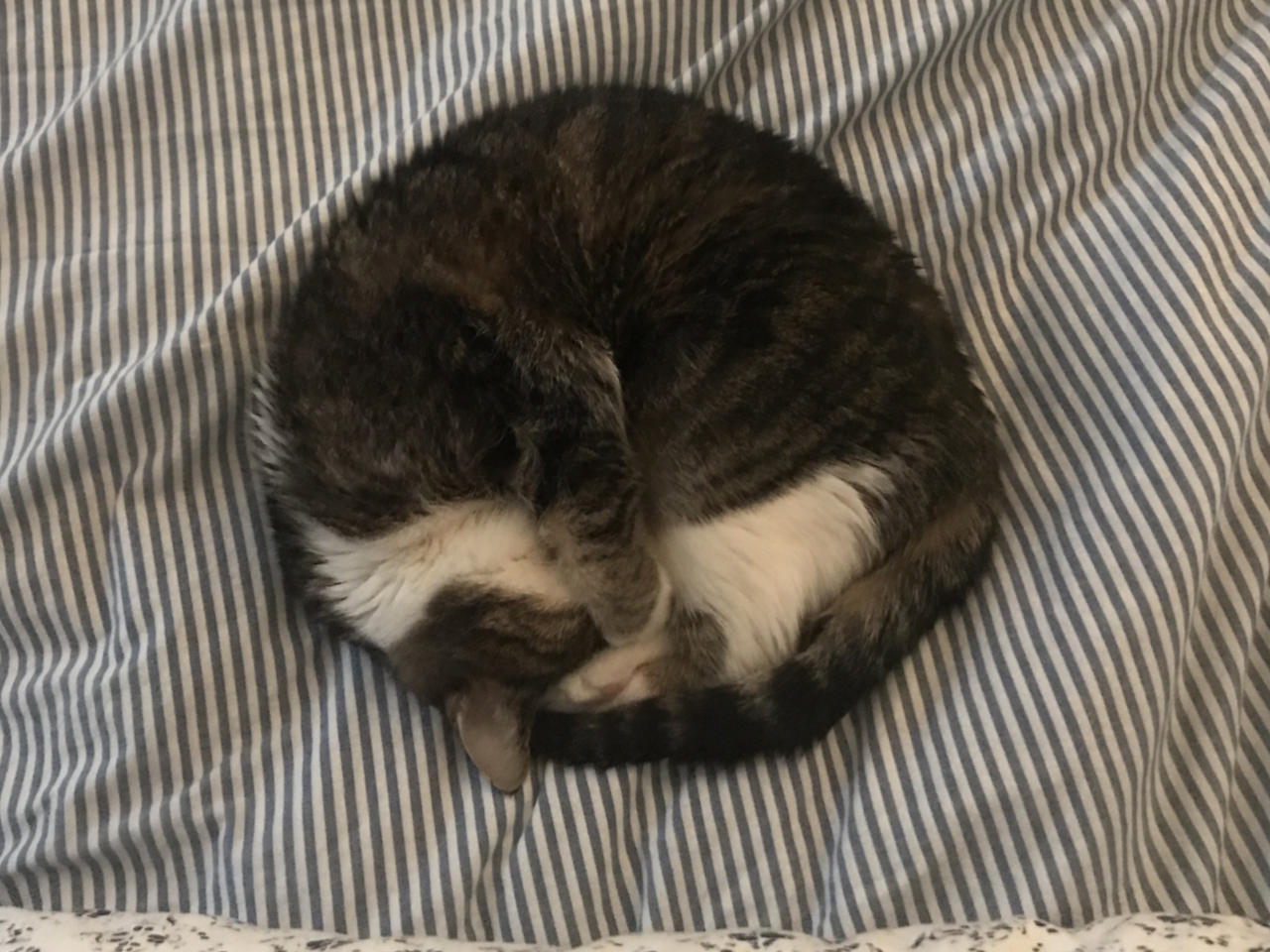 Throughout the years Tinkerbell was a constant companion, and yeah, she got into some trouble, and could be annoying, but she was always there. And I mean always there. She loved people, and if you had a lap, she would be your best friend. If you’ve ever heard people talk about their pets like “Oh, she doesn’t like men” or “He is afraid of strangers” well, Tinkerbell was the opposite. She was loving, and needy, and always ready to sit on you, or lay on you, or crawl on top of you. 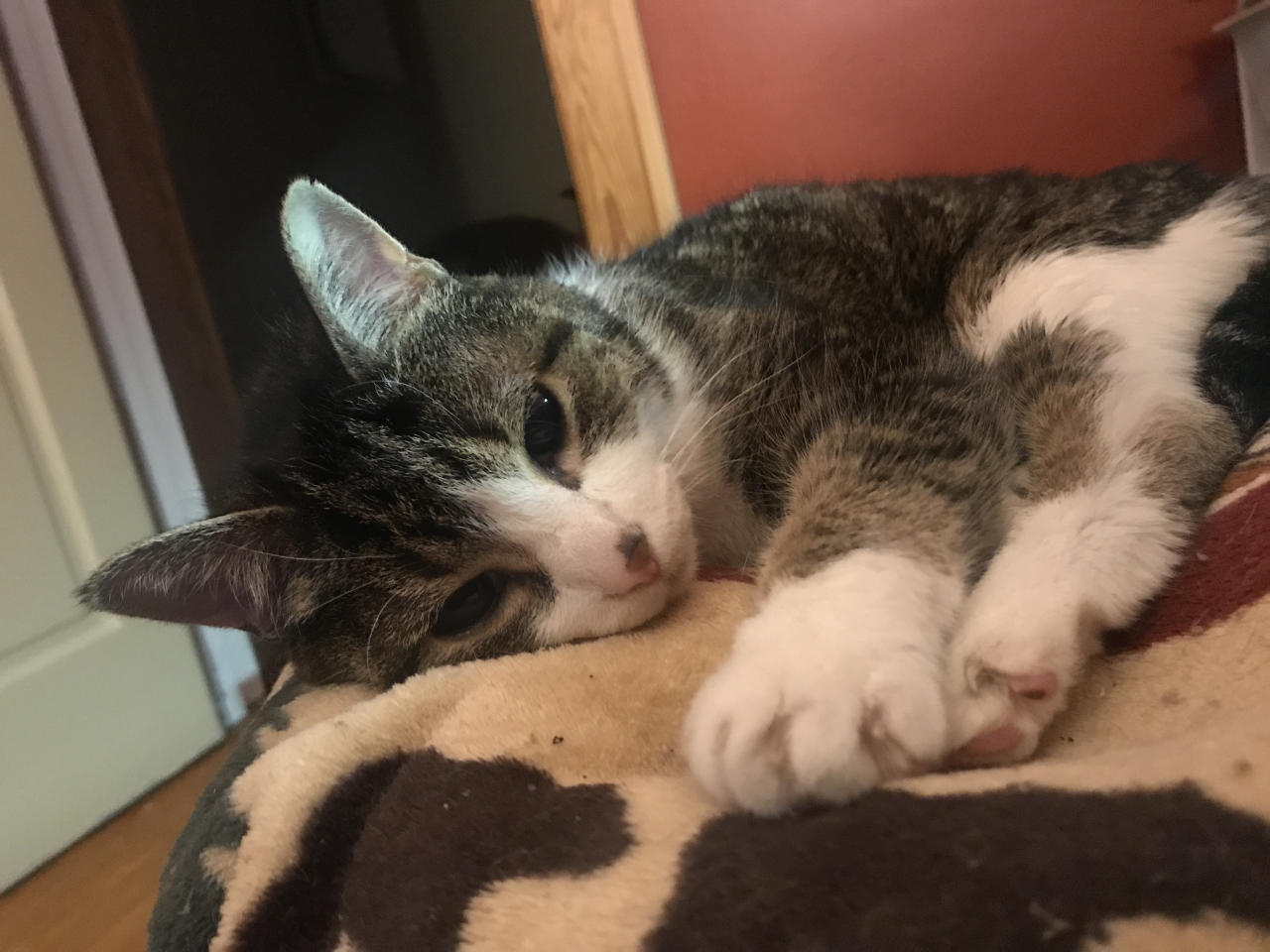 Tinkerbell has lived with four different cats during her time. She was the dominant cat, but when we got Magoo (aka: Lil Buddy) he was a brash young upstart, and even though he would give Chooch the what-for, Tink would not put up with his shit and she’d give him a swipe to let him know. Keep in mind she was 4 times his age and he was 4 times her weight. Didn’t matter. 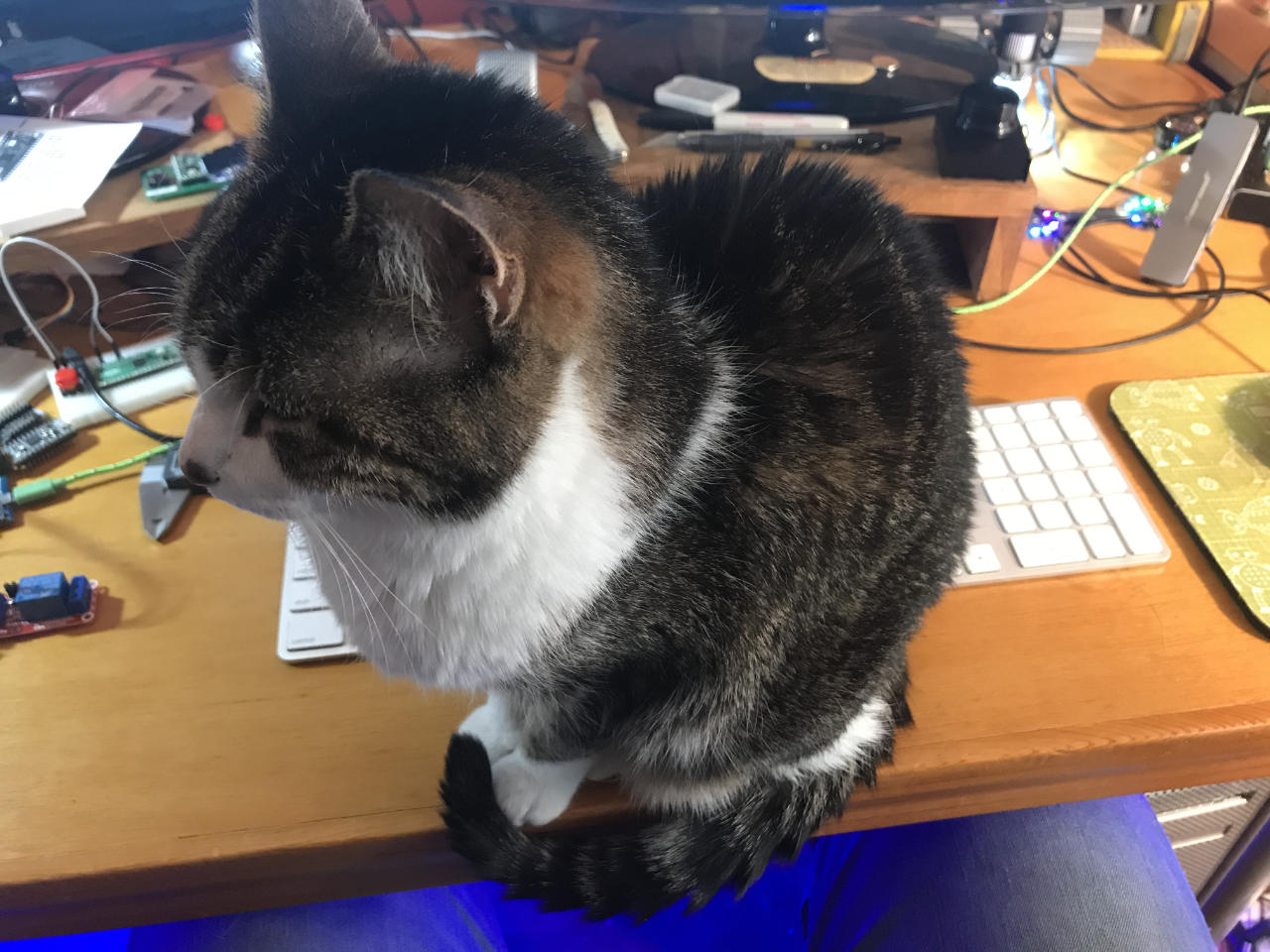 Dana always joked that Tinkerbell was my “other wife” or the woman who was trying to replace her. If Dana went out of town Tink would sleep on top of her pillow. She’d also often be found in Dana’s spot. Dana said if she ever tripped and fell down the stairs it would probably be sabotage by Tinkerbell. 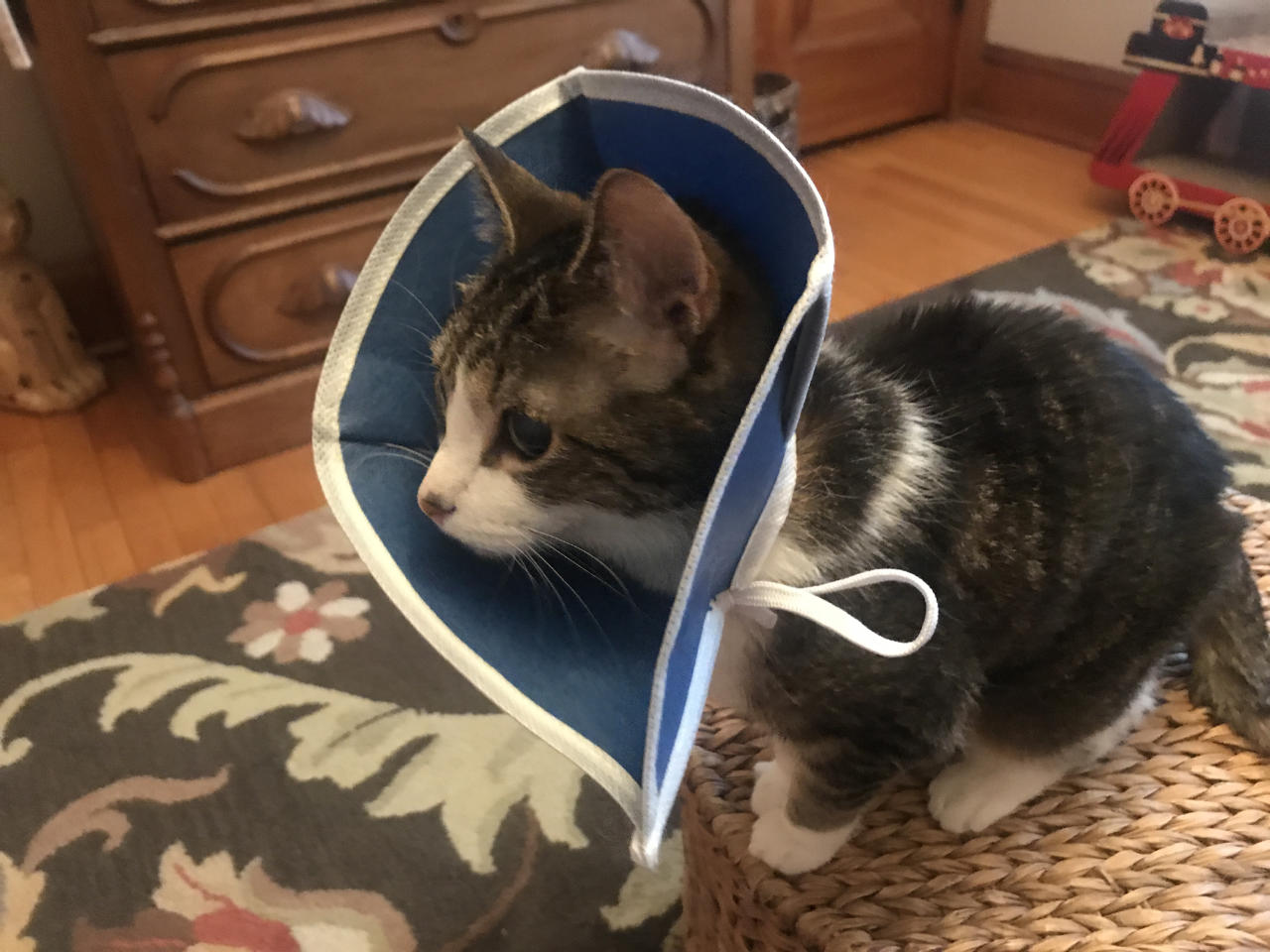 Okay, let’s talk about the name. Tinkerbell was on the paperwork, but like all of our cats, she had a dozen names and nicknames: Tink, Tink the Stink, Stinkerbell, Tinky, Stinky Tinky, Tinkus, Tinky Dinky Doo, Tinky Dinky Ding Dong, Tinky Doodle Doo, Tinkmaster General, and, well, you get it. She really didn’t stink, but Tink rhymes with Stink, so… 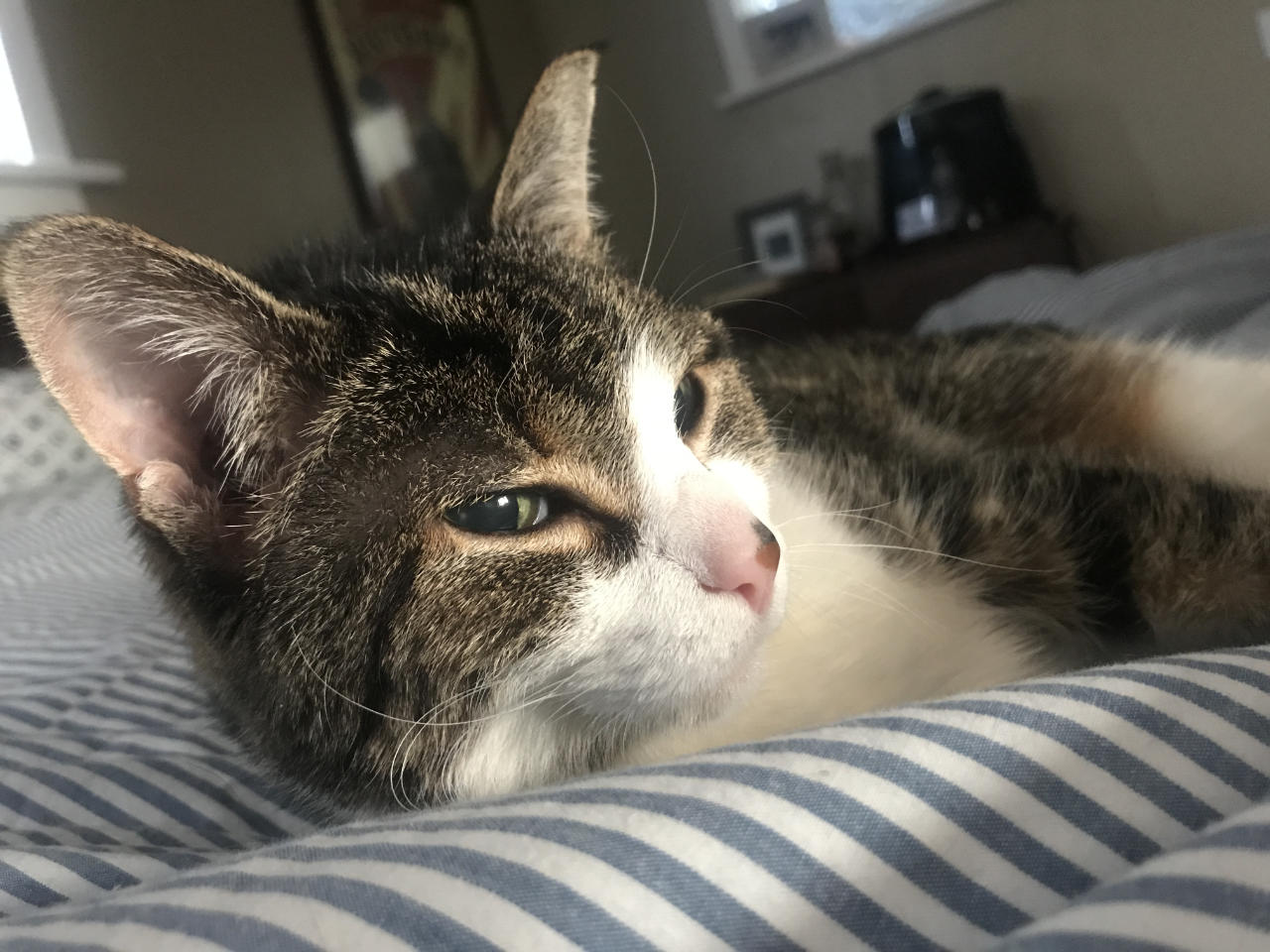 Back around 2017 or so she started acting weird right after Thanksgiving, so we took her into the vet, and she had been dehydrated, and they gave her fluids, and kept her overnight for observations. At the time (like with the cancer scare) we were concerned her time had come, but nope… she pulled through! Again! With a $500 vet bill. Classic Tink move! 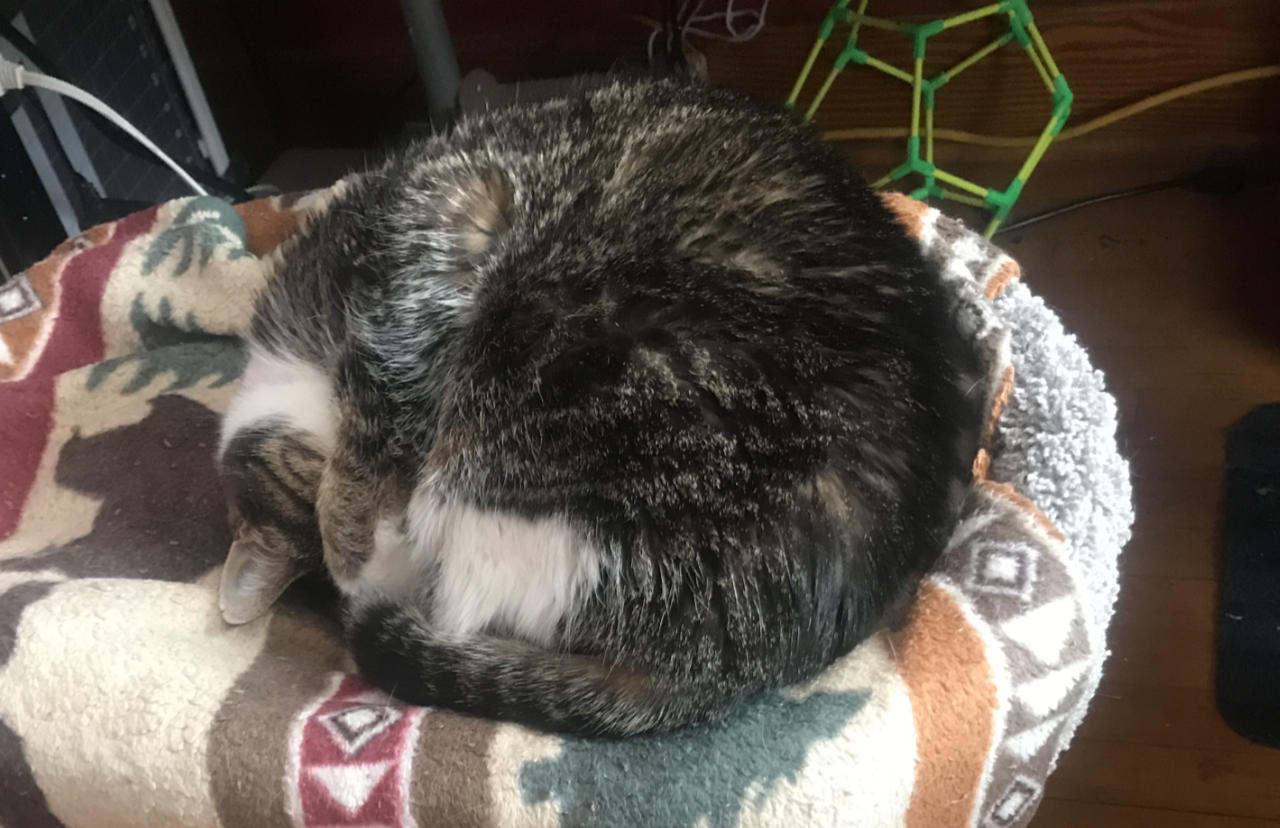 Oh, there was also the time around 2011 or 2012 where she made a bad jump (or fell?) off the TV and messed up her foot. Pretty sure that was a vet visit as well, and after that she had one wonky claw that stuck way out. Weird. 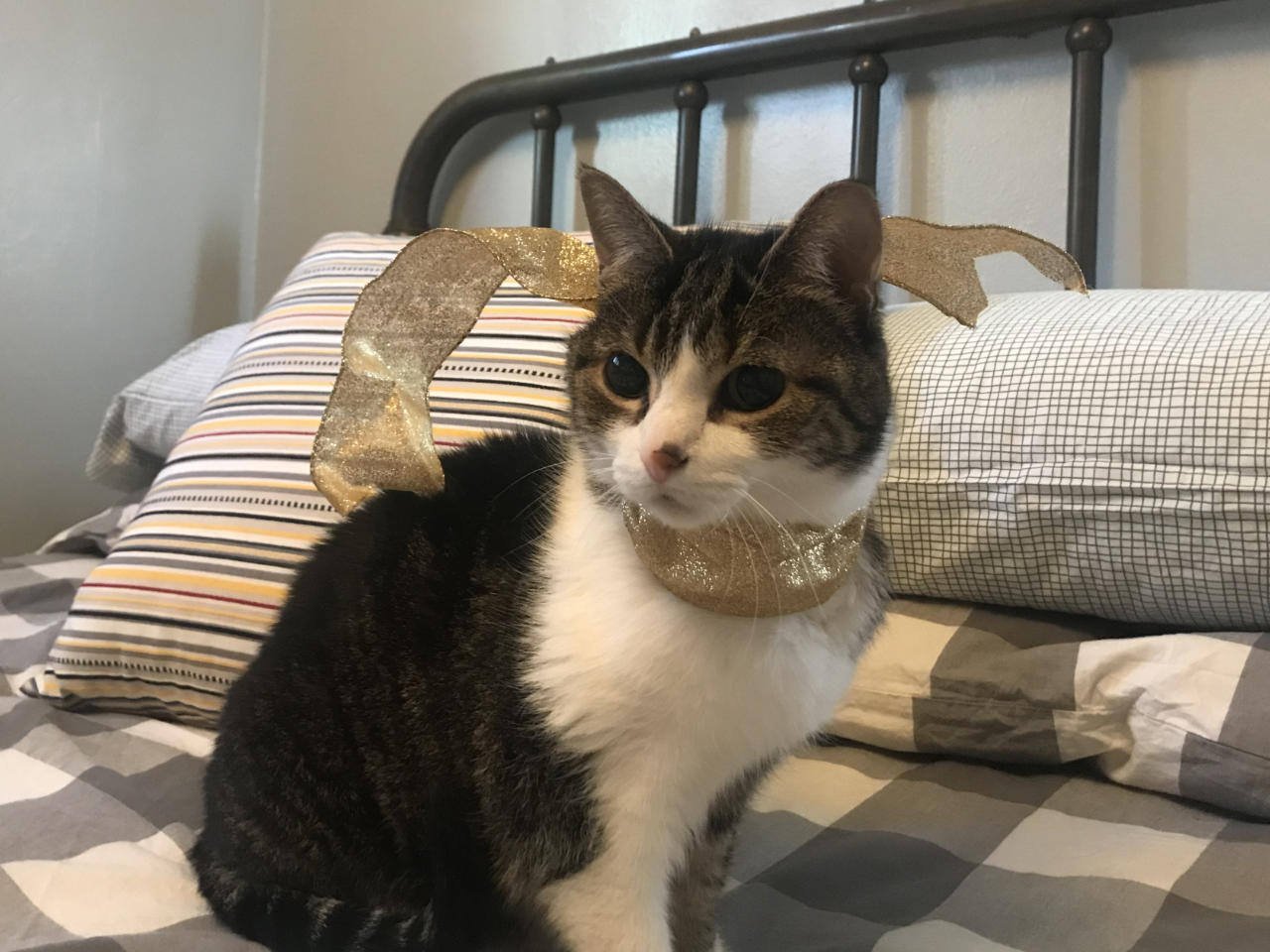 Jumping brings back two other memories. When she was a kitten, her step-sister Lucy made a jump from one counter to another. Tink tried it, and… just hit the floor. She was little, her legs were little, and she wasn’t quite a jumper yet. Contrast that to maybe 2007 when she used to jump on top of a door. Yeah, I can’t remember if she jumped right to the top, or onto a chair first (probably) but sometimes we’d find her on top of a door. Crazy. 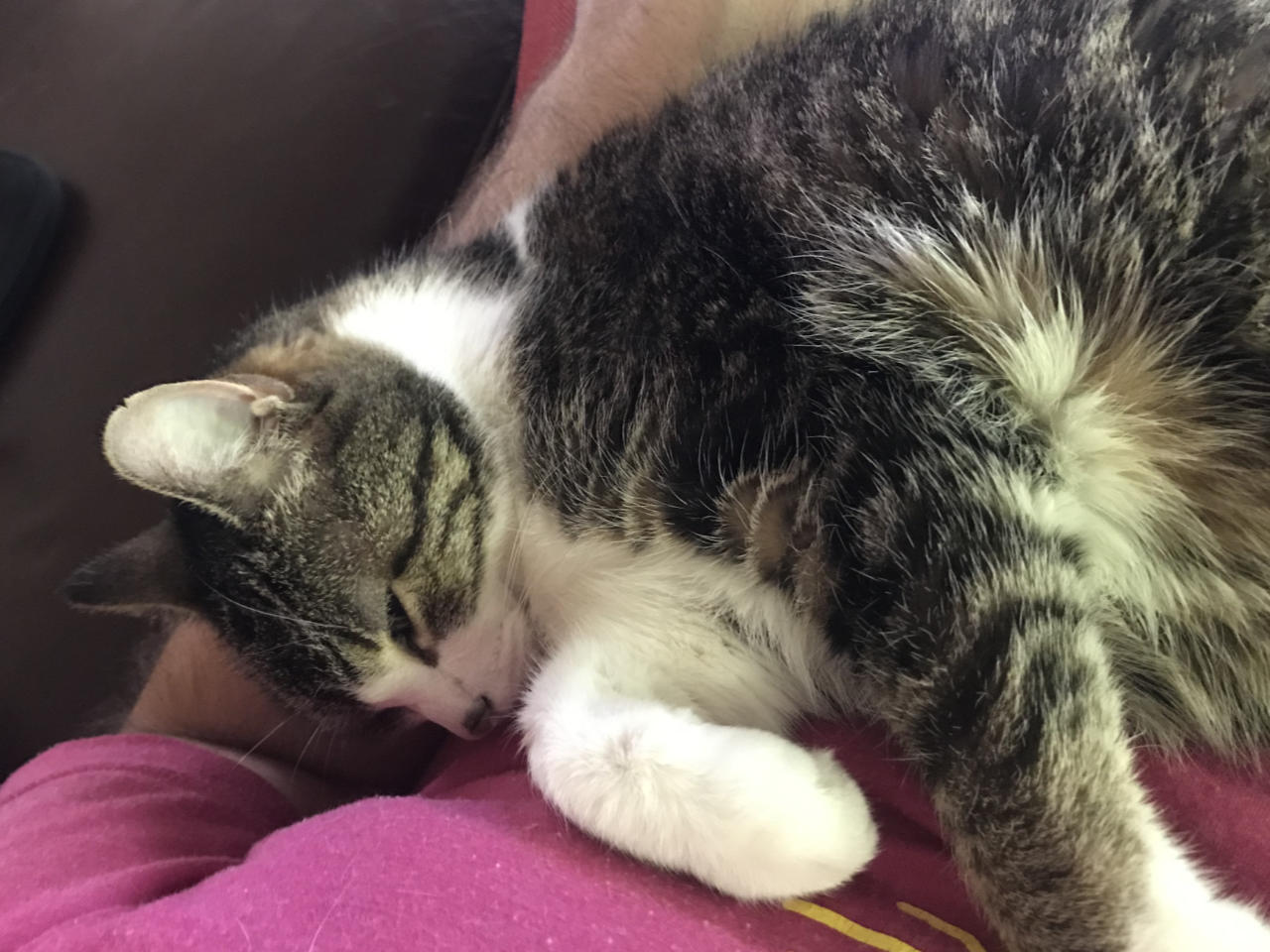 Speaking of finding her in weird places. She loved to sleep. Once she got trapped in a closet, asleep… once she was in a closed drawer, asleep. I know for the closet thing we searched the whole house for her, found he sleeping, and it was as if we disturbed her. Also, a few years ago I accidentally locked her in the office at home when I went to work one summer day. I got home, fed the cats, and wondered why she didn’t come when the food got poured. Found her in the office sitting on my chair staring at me. (Ooops!) Her body felt a little warm, but otherwise okay. I got her food, water, and a trip to the box. 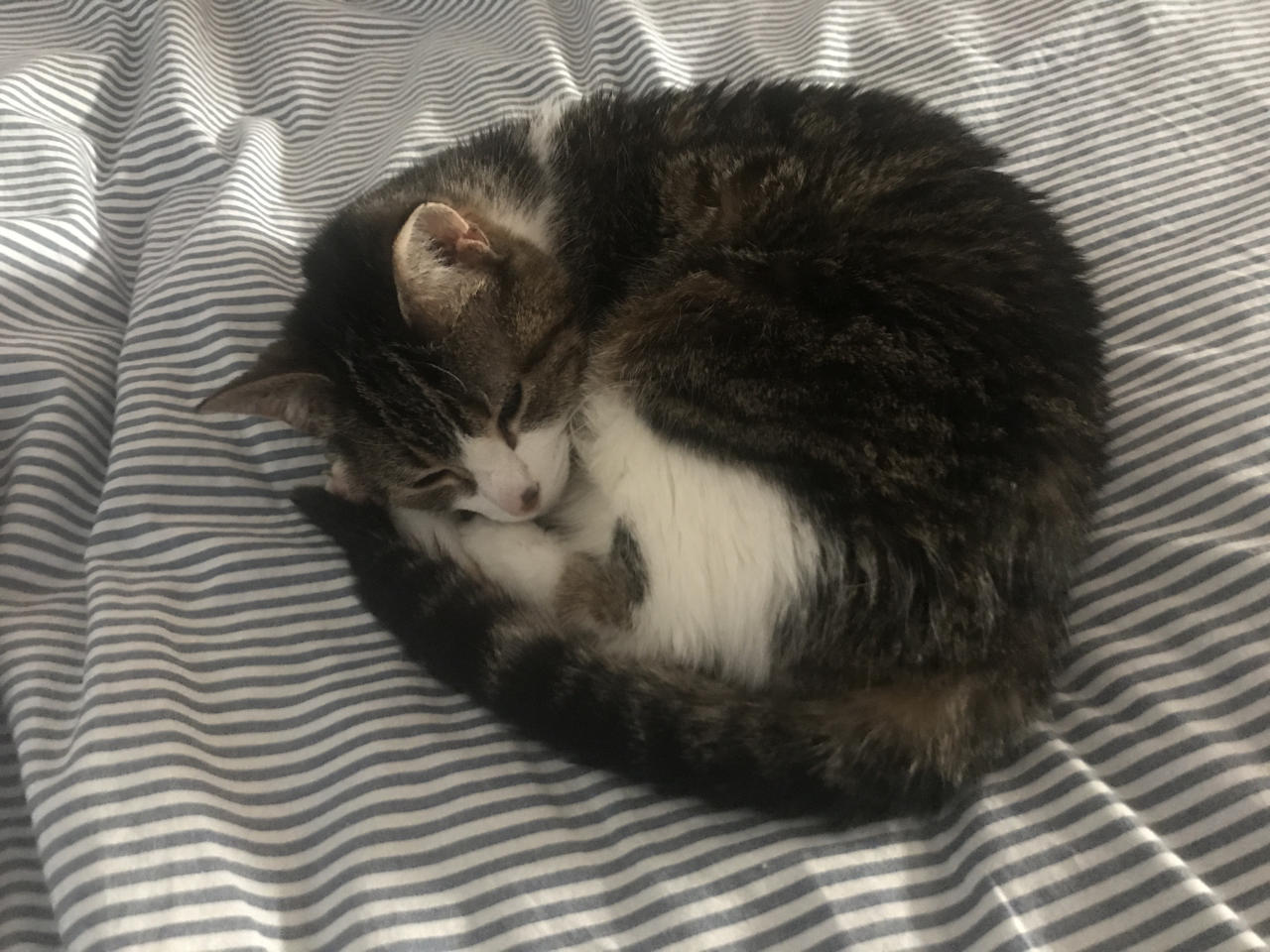 Tink though I was terrible at catching mice, so she would bring me some. Not real mice, but toys. Her favorites were a small furry white mouse, rainbow mouse, and a turkey led. (The last two were catnip toys made by a member of Milwaukee Makerspace.) Here’s the thing though, she wouldn’t just bring them to me, she would find one downstairs, pick it up in her mouth, then make a “Meerowr!” sound super loud while trekking from the downstairs living room all the way upstairs to my office, and drop it at the door. The sound drove Dana crazy, but I always appreciated it. Sometimes she would drop the mouse before she got to me, and I would say “Where is it!? Did you lose it? Did it get away!?” and sometimes I’d try to guess what toy it would be when I heard her coming. 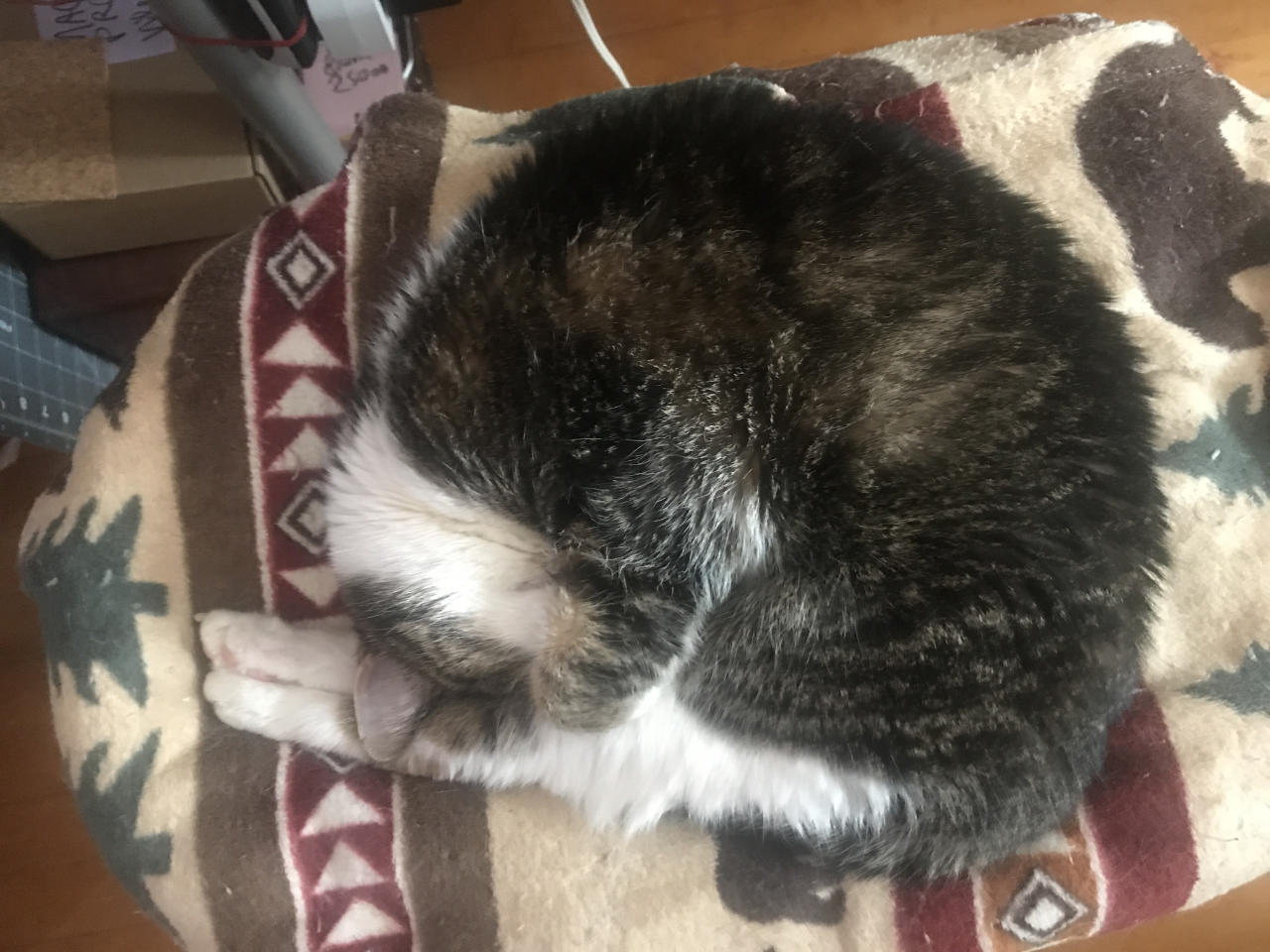 Tinkerbell really loved sleeping. She would sleep on our bed, on the downstairs bed, on a chair, in a cat bed by the heating vent… On my lap, on my chest, on my neck. She was a sleeper! In 2020 when I was working from home she’d come into my office and lay on my lap, which was not always easy to work with, but it was better than when she’d lay on my arms and part of my keyboard. We had a raised cat bed that sat about 60 Centimeters tall, and she would just lay there sleeping while I worked in the office. She did that a lot. Sometimes she’d come up stairs in the morning, ready to “go to work” but I was leaving, so I would tell her she was in charge and let her in the office to sleep. 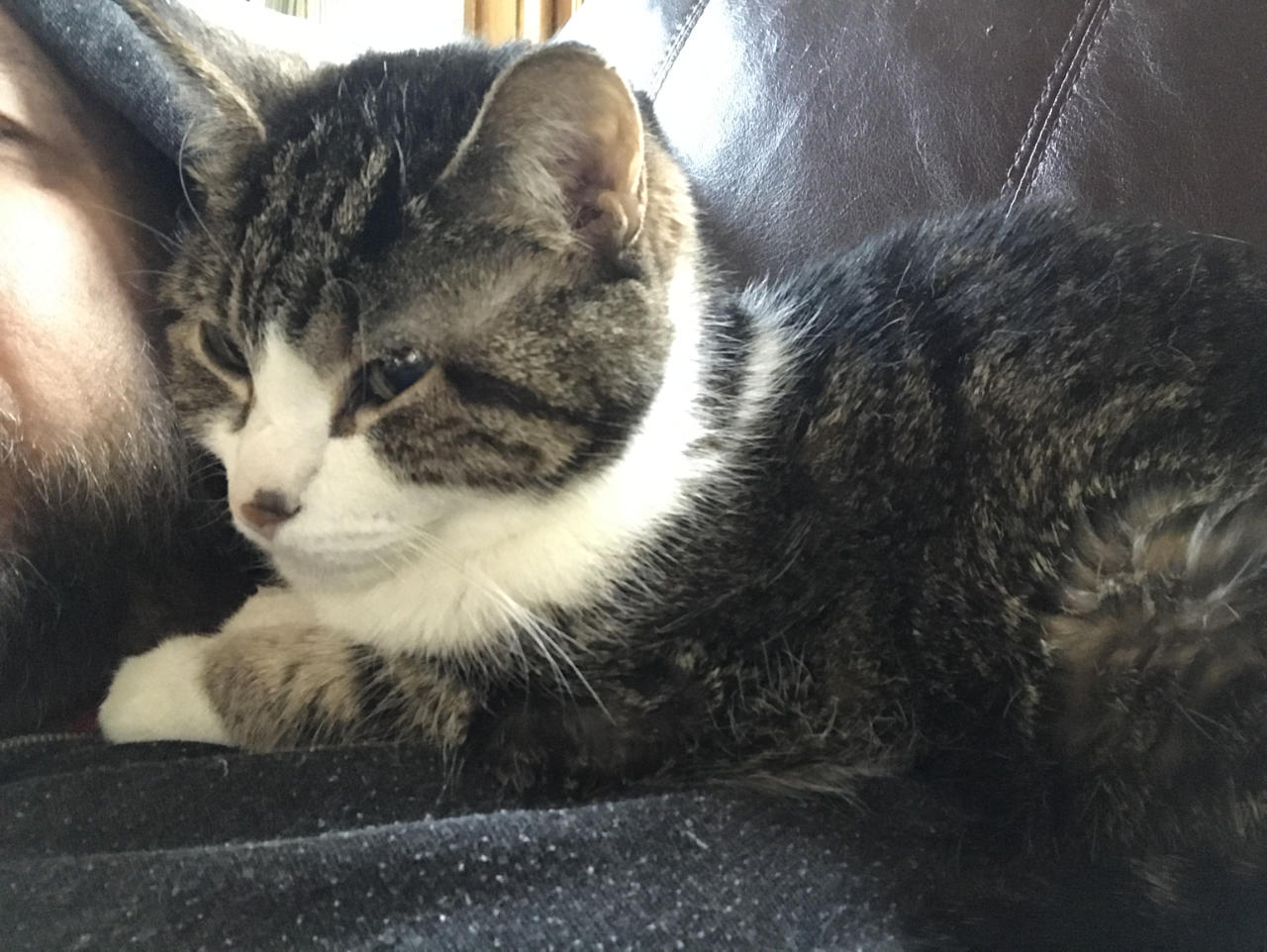 Occasionally she would awake, get out of the bed, and leave quickly. That could mean only one thing… the heat turned on! Yup, when the heat kicked on she would run into the bedroom and sit on the heating vent. We joked that we were just breathing “cat filtered air” in that room. She would also sit in front of the downstairs heating vents, often staring right into one, and we’d tell her she was gonna dry her eyes out! 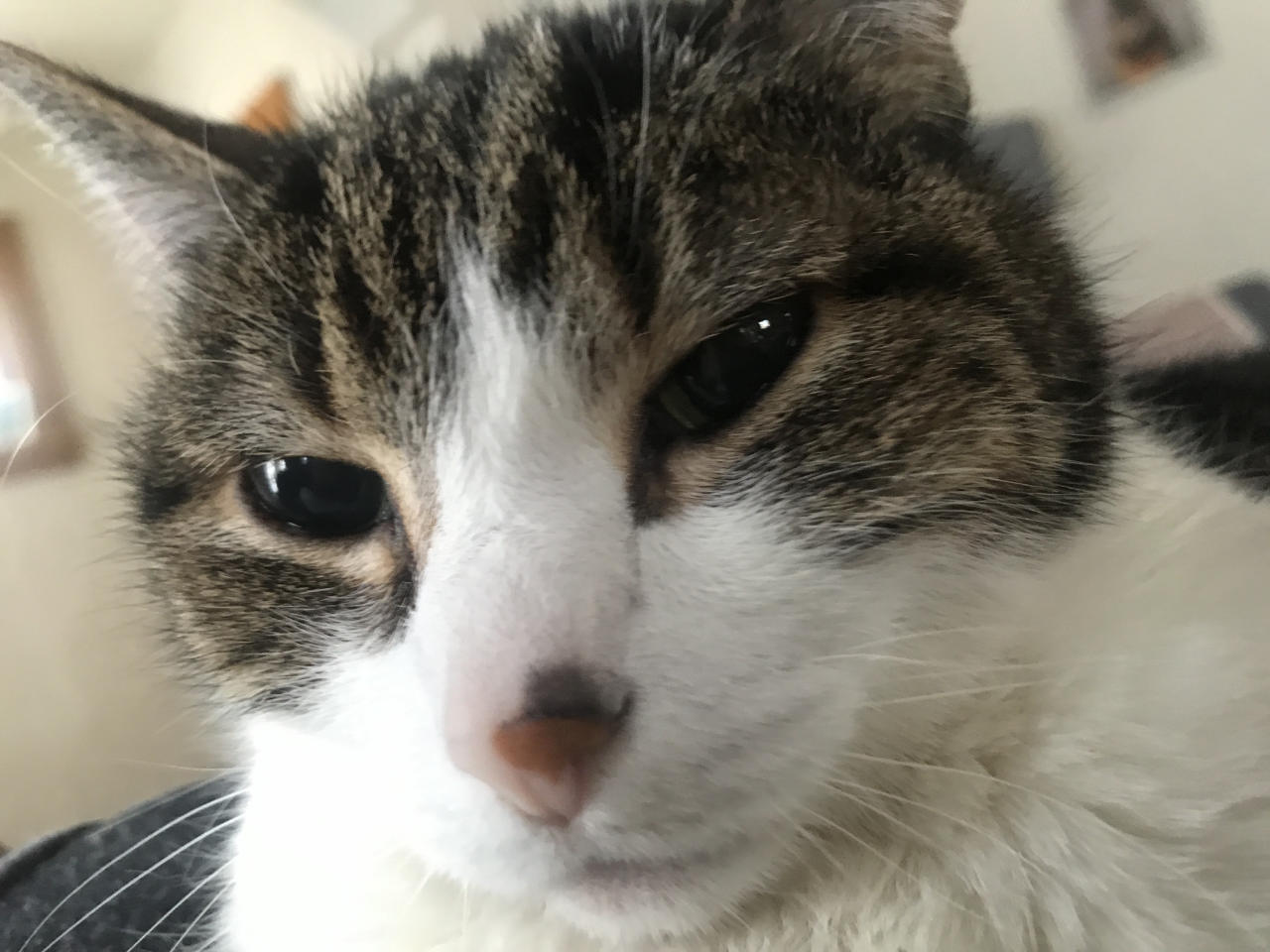 In her last year she would often show up in the dining room while dinner was happening, and yell at me. Sometimes I would just put her on my lap so she would be quiet while I ate. Yeah, she really was just a little baby. When it got too annoying I’d lock her upstairs so we could enjoy dinner. She never cried or scratched at the door, we’d always just find her upstairs asleep. She knew when to give up and take a nap. 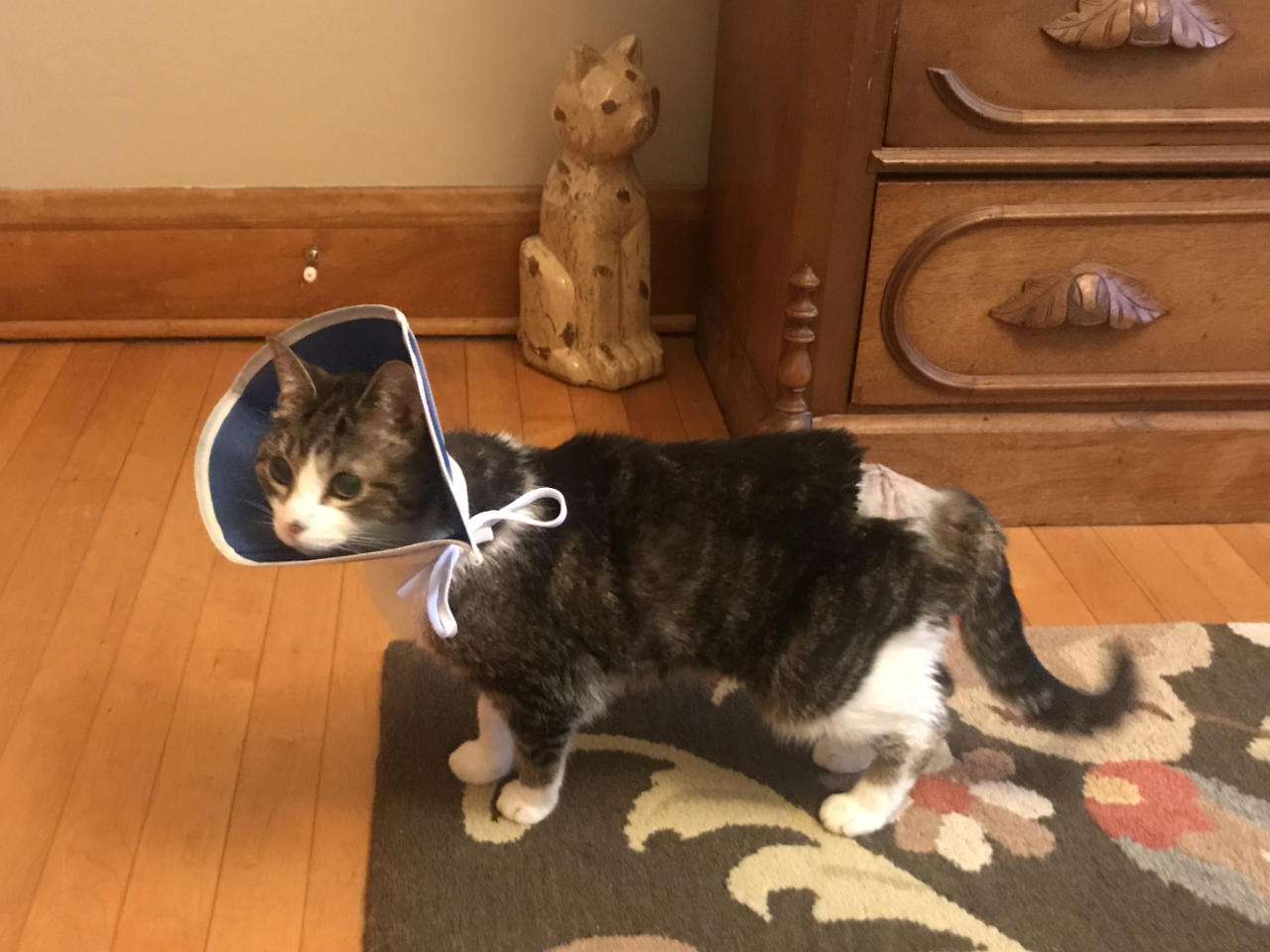 Speaking of sleeping and locking her out, a few years ago we finally started locking the cats out so we could get some proper sleep. This took care of the issue of Tinkerbell waking me up at 6am (or earlier) for breakfast. So we’d lock them downstairs at night, but… We could still hear her meowing and crying at the door at 6am, so I added a special drown out Tinkerbell box to our night-time routine. It mostly worked.

1 reply on “The Tinkerbell Pamphlet”

I’m glad you shared this. It sounds like you had a very loving companion. And also Dana.