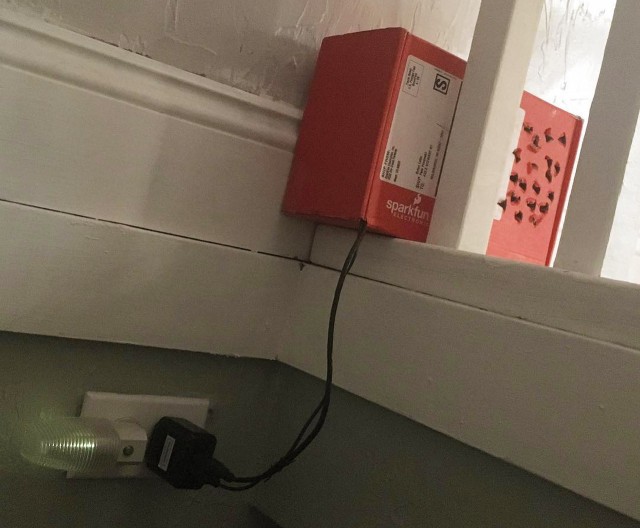 Now that summer is over and the cold months have arrived we no longer sleep with fans running, but that means we sleep without the sound of fan running, and who can sleep with all that quiet?

The wife asked if I could make something that sounded like a fan, which if you know me, is right up my alley. I grabbed a Raspberry Pi Zero and got to work. I found an audio clip of an oscillating fan (wow, there are tons of fan videos on YouTube!) and dropped it onto an SD card with Raspbian and mpg123 and had something working.

The Raspberry Pi Zero has no built-in audio output so in the past I’ve tried using a USB audio dongle, but the one I tested failed miserably in The Sonic Titan so I decided to go a different route. I used a 1080P HDMI Male VGA Audio Video Converter Adapter Cable for PC Laptop PS3 Xbox I got from eBay and then sent the audio out via HDMI so it would go to the adapter. I also needed a Mini HDMI adapter for that to plug into. It works fine, and I’ve not seen the same audio problems I did with the USB dongle.

As you can see from the photo I used a custom enclosure designed by SparkFun and modified with a stabby knife. ;)

I also used a set of powered speakers, and a dual USB power supply from Monoprice. This was hacked together rather quickly, but it all works quite well. We just plug it in before bedtime and within 30 seconds we’ve got our noise. (It also helps drown out the sound of my cat trying to wake us up at 6am.)

The thing I find most amusing about this project is that even though the Raspberry Pi Zero is a “$5 computer” it comes out to almost $30 when I add in the power supply, SD card, speakers, and HDMI audio adapter. Still, I think it’s a better option than running a full desktop computer or laptop with white noise all night. (Which apparently some people do. I’ve also heard that an old phone or tablet is a good option.)

The thing I like most about “Sleepy Noise Machine” is that is was something I could easily slap together with existing parts I had around the house. I mean, you can buy a white noise machine, but why bother when you can make your own?